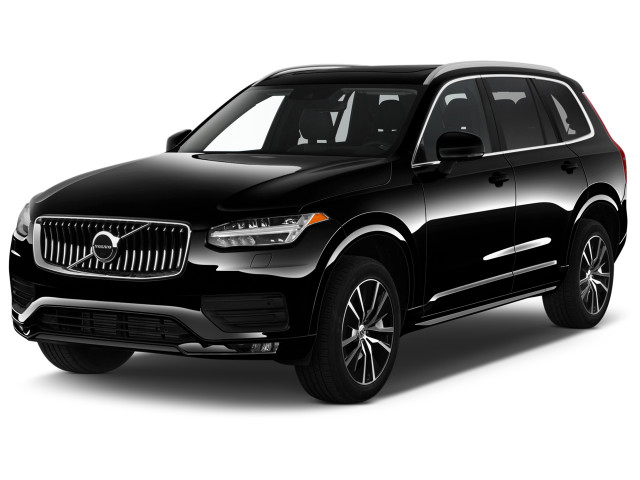 Though more expensive, we much prefer the more powerful T6 twin-charged engine, as the fuel economy penalty is minimal too.

The 2020 Volvo XC90 gets a few tweaks, but remains a stylish, practical, and safe luxury SUV.

The 2020 Volvo XC90 is a sharpened and stylish Scandinavian standout among three-row luxury SUVs. For its blend of impressive tech and safety features, a comfortable and practical interior, and head-turning looks, we give it 7.3 out of 10 overall. (Read more about how we rate cars.)

For the 2020 model year, Volvo has updated the XC90 with some visual tweaks, Android Auto functionality, and a six-passenger version with middle-row captains’ chairs. The XC90 also gains a system that keeps the vehicle from drifting into opposing traffic. A 12.3-inch digital gauge display is standard, and plug-in hybrids get a larger battery.

Even the biggest Volvo fans will have to squint to spot the visual changes to the 2020 XC90, but that’s fine in our book, as this is one of the best-looking luxury SUVs on sale today. Thoughtful touches like distinctive LED headlights and sharp wheel designs make the XC90 look more like a Range Rover than a Ford Explorer, a helpful thing for a brand trying to move further upmarket. The interior is similarly impressive though reserved, and while we generally like the iPad-esque infotainment system, a few more buttons and knobs for things like climate control would be greatly appreciated.

Base models get a turbo-4 powertrain with 250 horsepower and front-wheel drive, while all-wheel drive is available. A supercharged and turbocharged option provides 316 horsepower, and a plug-in hybrid model with two rear electric motors makes a combined 400 hp. The 2020 XC90 is far from a performance SUV in any form, though, and emphasizes serene comfort instead over corner carving.

Three rows of actual, adult-sized seats and ample cargo space make the XC90 more practical than its contemporaries, and a high roof line yields adequate head room throughout. Luxury features grace the cabin such as a crystal shifter on the hybrid version and open-pore wood, but some materials are thin and flimsy to the touch.

As is Volvo’s reputation, the XC90 boasts an impressive safety record, including five stars overall from the NHTSA and “Good” ratings across the board from the IIHS in terms of crash tests. The headlights only receive an “Acceptable” rating however, keeping the XC90 from a Top Safety Pick award just yet, though the 2019 model did receive the honor.

Since it’s been on the market, the XC90 has gained new standard features nearly every year, and as such, base models are well-equipped with standard active safety tech like automatic emergency braking, a power liftgate, a digital gauge cluster, 18-inch wheels, and a big touchscreen infotainment system with Apple CarPlay and now Android Auto.

Though the plug-in hybrid model manages an impressive 55 mpg-equivalent (MPGe), combined fuel economy for the rest of the range is surprisingly poor for 4-cylinder engines, ranging from 21 to 25 mpg combined.

The 2020 Volvo XC90 ushered in a new age of Volvo design, and still looks as good as the day it was drawn. We give it 8 out of 10 here, with a point for the body and two points for its serene cockpit.

Though it received a slight visual refresh, we’re hard-pressed to spot the differences. Not that an SUV this sleek needs an update however, as the sharp lines, thoughtful details like front and rear light signatures, and a selection of handsome wheel designs make for one of the best-looking SUVs on sale.

Inside, the XC90 practices Scandinavian minimalism, blending simple character lines with light and airy materials, though sometimes too light and airy. While most soft-touch plastics, leather, metal, and optional open-pore wood pass the touch test, other minor trim pieces are suspiciously flimsy, like the cover that slides over the cupholders. Other luxury brands (specifically German) manage a bit better quality but have a longer history of doing so.

The 2020 Volvo XC90 emphasizes comfort and grace over power and pace.

Make no mistake, the 2020 Volvo XC90 is not a performance SUV by any measure, but it performs incredibly well from a comfort perspective. We give it 7 out of 10, with bonus points for its powertrains and for its supple ride.

The base T5 powertrain is a 2.0-liter turbo-4 with front-wheel drive and an 8-speed automatic transmission. Though its 250 hp and 258 pound-feet of torque is enough to get the job done, a 4,500-pound curb weight hampers acceleration. We’d opt for the T6 engine, which gets a supercharger to go with its turbocharger and an additional 66 hp for a total output of 316 hp and 295 lb-ft. All-wheel drive is standard with this engine too, making the package more enticing.

Volvo also offers a T8 plug-in hybrid model with a new 11.6-kwh battery that boosts its electric-only range to 18 miles on a full charge. Though the spec sheet says it makes 400 combined horsepower, it can accelerate to 60 mph in less than six seconds, but the price of entry is five figures more than the base model.

Steering is light and direct, and the XC90 manages body roll well for a tall SUV, but this is no sports crossover like its contemporaries from BMW and Mercedes-Benz can claim. Instead, comfort is the name of the game, with optional adjustable air suspension that smooths things over well, but even the standard springs are pleasant enough.

The 2020 Volvo XC90 is comfortable and very spacious, and well-trimmed for the most part.

The 2020 Volvo XC90 is spacious and practical as well as generally comfortable, but some materials could be upgraded. We give it 9 out of 10 for comfort and quality.

Upon first inspection, the XC90’s interior impresses with a simple Scandinavian design that features light and airy available upholstery, real metal trim, optional open-pore wood, and finer details like a crystal shifter for the plug-in hybrid model. The seats are thin but trademark Volvo comfortable, at least up front. Though the rear seats feature the same design, they’re a little less supportive, though still roomy enough for three adults in bench-seat form (two captain’s chairs can be ordered). We like the standalone third-row chairs more than most though.

Where the XC90 starts to show some cracks is in the quality of certain materials, namely the door panels, center console sides, and sliding cover for the cupholders. Each of these pieces is thin and less appealing than they might be in an SUV in this price range.

Practicality is a plus with the 2020 XC90. It can seat seven comfortably, and it has a huge cargo hold that offers 15.8 cubic feet behind the third row, 41.8 cubes behind the second, and up to 85.7 cubic feet with both rear rows folded flat. That’s close to Escalade or Navigator levels at a fraction of the cost.

The 2020 Volvo XC90 has good crash-test scores and an abundance of standard safety gear.

As is the Volvo way, the 2020 XC90 boasts impressive safety scores and standard active tech. We give it 8 out of 10 here for its technology and crash-test scores, though outward vision’s hampered a little by the rear roof pillars.

The NHTSA gives the XC90 five stars overall except for four stars for the rollover rating, which is typical for SUVs. The independent IIHS also awarded “Good” scores for every test they perform except for the headlights, which received an “Acceptable” rating.

For 2020 the XC90 gains a system borrowed from the smaller XC60 that can keep the SUV from veering into oncoming traffic. There’s also a driver-assistance Pilot Assist system available that can take over steering, accelerating, and braking duties on the highway, but it can be frustrating in its lane hygiene; we’d pass on it in favor of more luxury fittings.

Used Volvo XC90 for sale near

The 2020 Volvo XC90 is well-equipped from standard but is best had with a bit of extra grunt for a bit more cash.

The 2020 Volvo XC90 is well-equipped from the bottom up, but we recommend spending a bit more to get a better powertrain. We give it 8 out of 10 here, with extra points for its excellent infotainment and its standard and optional equipment.

The Sensus infotainment system is tablet-like in its functionality but can be very difficult to use while on the move. We would also really appreciate redundant climate control dials and switches, as it’s annoying to operate the touchscreen every time you want to adjust the temperature or fan speed. The standard smartphone connectivity technology is appreciated however, and makes satellite navigation nearly redundant.

The XC90 Momentum starts at $49,345 including a mandatory destination fee, while the R-Design rings in at $57,095. Inscription models will set you back $63,595, but include nearly every option you want minus the top-end stereo system.

We recommend sticking with the Momentum model with T6 powertrain for some extra oomph, ringing in at $57,295 before options.

Volvo’s warranty covers the XC90 for 4 years or 50,000 miles but doesn’t include initial maintenance visits.

The 2020 Volvo XC90 uses small engines and offers a plug-in hybrid powertrain, but fuel economy is only average at best.

Despite a pair of 4-cylinder engines and a plug-in hybrid model, the 2020 Volvo XC90 manages only average fuel economy due to its considerable size. We give it 4 out of 10 as such.

The T6 gains plenty of horsepower from its supercharger but suffers in the fuel economy department, managing just 18/26/21 mpg.

With its improved battery, the T8 plug-in hybrid travels up to 18 miles on electricity along, though its combined rating on an empty battery is just 27 mpg.

Be the first one to write a review on 2020 Volvo XC90
Rate and Review your car for The Car Connection! Tell us your own ratings for a vehicle you own. Rate your car on Performance, Safety, Features and more.
Write a Review
USED PRICE RANGE
$42,500 - $75,998
Browse Used Listings
in your area

7.3
Overall
Expert Rating
Rating breakdown on a scale of 1 to 10?
Compare the 2020 Volvo XC90 against the competition
Compare All Cars
Looking for a different year of the Volvo XC90?
Read reviews & get prices
Related Used Listings
Browse used listings in your area
See More Used