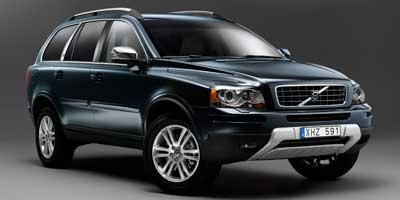 The V-8 engine is recommended for its towing capacity, near-silent operation, and very small penalty in fuel economy.

The 2009 Volvo XC90 is a sport-utility vehicle done the Swedish way: with a clean design and an emphasis on safe, all-weather driving, instead of flashiness or brute strength.

The 2009 Volvo XC90 caters to American tastes with its optional V-8 engine, but otherwise it’s built for safety-minded families who need an all-wheel-drive SUV, though third-row room is strictly limited. Available since 2005, the XC90 still looks fresh and well proportioned; its basic shape is aging well, inside and out. The cabin’s interior is laid out handsomely and dressed in conservative-looking but expensive-feeling trim.

All-wheel drive is standard, and the XC90 tows up to 5,000 pounds yet maintains a relatively spry, carlike feel. Steering is fast enough and the ride is well controlled. A 235-horsepower, 3.2-liter inline six-cylinder engine mated to a standard six-speed automatic is the base drivetrain on the 2009 Volvo XC90. A 4.4-liter V-8, shared with the new S80 sedan, makes 311 horsepower and is teamed with the same six-speed automatic. Unusually, the V-8 is very quiet, even when it's floored. Given its 13/19 mpg fuel economy, it should be heard. The six-cylinder version musters just 14/20 mpg.

Including the optional hideaway third-row seat, the 2009 Volvo XC90 can seat up to seven passengers, making it a viable alternative to truck-based SUVs and seven-passenger minivans. The XC90's second-row seat can also be adjusted fore and aft to maximize either cargo space or passenger room. While the front- and second-row passengers have good room and comfortable chairs, the third-row seat should be viewed as a last-ditch solution.

The XC90 scores five-star crash ratings from NHTSA and is a Top Safety Pick, according to the Insurance Institute for Highway Safety. Front side and side curtain airbags, anti-lock brakes with electronic brake distribution and brake assist, stability and traction control, roll-stability control, and a rollover protection system are standard on all Volvo XC90s, as is a tire pressure monitoring system.

For the new model year, Volvo expands the XC90 lineup with the addition of the new R-Design models, which more or less replace the XC90 V-8 Sport model. R-Design XC90s are distinguished by a host of exterior and interior styling cues, including 19-inch "Vulcanis" diamond-cut alloy wheels and specific R-Design grille, leather seating surfaces with embossed R-Design logos, steering wheel, watch dial instruments, and floor mats. The 2009 Volvo XC90 R-Design models are available with either a 3.2-liter six-cylinder or 4.4-liter V-8, with the V-8 model also receive standard 20-inch "Cratus" alloy wheels in place of the 19-inch ones and split dual exhaust pipes.

Changes to the rest of the 2009 XC90 model lineup include the availability of a new Convenience Package. The package features Volvo's Blind Spot Information System (BLIS), power retractable rearview mirrors, rear park assist, Interior Air Quality System (IAQS), and the enhanced Volvo Navigation System II with remote control and Real Time Traffic. Optional features on the 2009 Volvo XC90 are on par with other luxury SUVs, including wood trim, 18- and 19-inch wheels, soft leather seating, and a DVD entertainment system for the second row.

The basic shape of the 2009 Volvo XC90 is aging well—inside and out.

Motor Trend notes that in 2007, the SUV got “a new grille, bumpers, and taillights,” but retains the XC90’s "stealth image." Road & Track says "to further accentuate the sporty nature and to create a sleeker appearance, the car is not fitted with roof rails, although these are still available as an option." Available since 2005, the XC90 still looks fresh and well proportioned. Kelley Blue Book contends "the XC90 looks like a bigger, taller version of the popular XC70 wagon” and points out that "all the familiar Volvo styling cues are present, including the raised-V hood bulge and the elongated taillights running the length of the D-pillars." Cars.com says the XC90 has the "smoother, friendlier look that's been present since the early 2000s" in the latest Volvos. Edmunds has a rare complaint for the XC90, remarking that its "overall design is getting a bit stale."

Car and Driver compliments the “first rate” cabin design. Cars.com states, "the dashboard and instrument panel dome employ slanted, angular themes, as does a three-spoke steering wheel with audio and cruise controls.” Kelley Blue Book also notes that "tending towards understated, the interior is tastefully appointed and very user-friendly." Inside, the interior is well laid out and dressed in conservative-looking but expensive-feeling trim.

All versions of the 2009 Volvo XC90 feel more carlike than many other large utes, though fuel economy is lackluster.

TheCarConnection.com researches road tests from across the Web on the 2009 Volvo XC90 and finds it has better handling than many SUVs, but six-cylinder performance is sluggish, and eight-cylinder versions are thirsty and expensive.

Kelley Blue Book notes that the "3.2-liter in-line six gives the base model a significant advantage over the last generation turbocharged in-line five-cylinder engine" and "more horsepower and torque help the big Volvo cruise up to speed a bit quicker." Cars.com reports that the XC90's "3.2-liter six-cylinder engine produces 235 horsepower and 236 pounds-feet of torque," and "the available 4.4-liter V-8 generates 311 hp and 325 pounds-feet of torque." However, for drivers who must have a V-8, Kelley Blue Book says "the 4.4 trim level's hefty helping of torque and impressive horsepower vastly improves the performance figures." Car and Driver agrees and recommends "the base engine is best avoided as it struggles to move the heavy XC90 around." Not only that, but the "weakling base engine" is rated "less refined than some of its rivals." Edmunds reviewers, however, aren't huge fans of the V-8, either, observing "the XC90 V8 Sport model takes 7.4 seconds to hit 60 mph, about average for a V8-equipped luxury crossover."

According to Cars.com, both engines of the 2009 Volvo XC90 come equipped with a six-speed automatic transmission, and "when properly equipped, the XC90 can tow up to 4,960 pounds."

Kelley Blue Book gives the most positive reviews regarding handling, saying "the XC90 achieves impressive on-road performance via a combination of unique safety and stability devices." According to Edmunds, for "the 3.2 and regular V8 trims, ride quality is soft and comfortable"; they go on to explain that "although it lacks the silky ride quality of the Lexus RX 350 or the sport-sedan demeanor of an Acura MDX, this Volvo offers an appealing blend of comfort and handling that will satisfy most drivers."

According to J.D. Power, with the 2009 XC90, Volvo claims to have solved the heavy load dynamic typical to an SUV by use of its Nivomat rear suspension, "which can drop the rear of the vehicle, changing handling dynamics, bumper heights and headlight illumination." Car and Driver is one of the few sources to find fault with the XC90 Volvo, stating, "Sport models have a stiffer and often jittery ride." However, Kelley Blue Book maintains that "the combination of a wide stance and Volvo's Roll Stability Control (RSC) system is a big part of the reason the XC90 can perform emergency maneuvers almost like a low-slung sedan." Their reviewers also assert "you'll hardly feel it as you round corners and zip through twisting turns."

The 2009 Volvo XC90 has great front seats, comfortable second-row seats, and a third-row seat best reserved for kids—along with a well-trimmed interior.

Reviewers generally agree on the high quality of the cabin’s materials. Edmunds says, "Materials are first-rate, ergonomics straightforward and the overall design consistent with the hip, minimalist look Volvo has utilized with great success for a decade." They predict "the addition of standard sapele wood trim in the V8 model should please those who have found past XC90s a bit austere." Autoblog agrees, observing inside the 2009 Volvo XC90 "a blue-lit instrument cluster joins some additional badging, a leather wrapped steering wheel and an aluminum center stack to boost the premium feel." Kelley Blue Book isn't as enamored, pointing out that "there is a lot of gray plastic and leather inside the XC90 Volvo, although a smattering of wood trim helps warm things up a bit."

Most reviewers consulted by TheCarConnection.com, however, say the optional third-row seating is suitable for small children only. Kelley Blue Book predicts you won't like the Volvo XC90 if "you're all about maximum interior space," because the 2009 Volvo's "third-row seat is not well-suited for adults." Cars.com agrees, citing "difficult access to third-row seat," and "it's a tight squeeze in back." Edmunds contends "legroom in the rearmost quarters is better than in many competitors, although the second row does get cramped as a result."

The 2009 Volvo XC90 receives high marks for its spacious cabin. Kelley Blue Book remark that "the driver and passenger relax in a comfortable pair of bucket seats featuring built-in whiplash protection." For all but the back-row passengers, it's easy to get in and out of the XC90 Volvo. Kelley Blue Book says "the tall ride height does not translate into a tall step-up height...making entry and exit similar to getting in and out of a car." According to Cars.com, there are "rear 40-20-40 split-bench seats.”

Car and Driver reports that driving a Volvo XC90 is "a relatively quiet experience.” However, Cars.com doesn't like the "droning V-8 exhaust on the highway."

The 2009 Volvo XC90 scores well in crash tests and has a raft of standard and optional safety gear.

The 2009 Volvo XC90 is one of the safest sport-utility vehicles, with some cutting-edge safety options available.

Edmunds also praises "the center position in the second row [which] has an integrated child booster cushion that slides forward, allowing easier access to children in the back," and notes the Blind Spot Information System. Known as BLIS, "this bit of technology monitors vehicles entering the XC90's blind spots and warns the driver via indicator lights."

The 2009 Volvo XC90 is an IIHS Top Safety Pick. The Volvo scores five-star crash ratings from the National Highway Traffic Safety Administration (NHTSA) and is awarded a four-star rating for rollover resistance.

Kelley Blue Book notes, "Volvo takes particular pride in the XC90's reinforced roof design, which can provide an added measure of security in the event of a rollover accident."

Used Volvo XC90 for sale near

The 2009 Volvo XC90 is outfitted with a good selection of standard features, and its options list includes some good long-haul family features.

The 2009 Volvo XC90 arrives with many luxury features included and allows some high-tech options.

Standard on the base version are 17-inch wheels, wood trim, a power driver seat, and an auxiliary audio jack, says Edmunds. J.D. Power notes the standard features on every version also include power windows, locks, and mirrors; dual-zone electronic climate control; a flat-folding 40/20/40-split second-row seat; and a high-performance 160-watt, 8-speaker, MP3-capable audio system. There are three main trim levels for the 2009 Volvo XC90: the 3.2, the V8, and the new R-Design.

According to Edmunds, the V8 XC90 Volvo adds all-wheel drive and a third-row seat for seven-passenger capacity, along with a power front passenger seat, a rear air conditioner, and a sunroof.

A navigation system, Sirius Satellite Radio, and Bluetooth are optional, along with a DVD entertainment system. Kelley Blue Book likes the "upgraded audio with subwoofer and rear controls" that are options on all of the 2009 Volvo XC90 models.

Be the first one to write a review on 2009 Volvo XC90
Rate and Review your car for The Car Connection! Tell us your own ratings for a vehicle you own. Rate your car on Performance, Safety, Features and more.
Write a Review
Browse Used Listings
in your area
8.4
Overall
Expert Rating
Rating breakdown on a scale of 1 to 10?
Compare the 2009 Volvo XC90 against the competition
Compare All Cars
Looking for a different year of the Volvo XC90?
Read reviews & get prices
Related Used Listings
Browse used listings in your area
See More Used
The Car Connection Daily Headlines