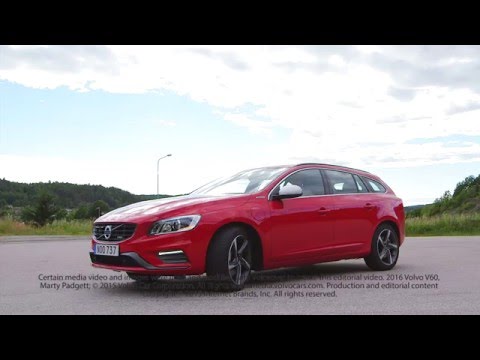 Unless you need all-wheel drive, give strong consideration to the T5 with its marvelously efficient Drive-E engine and 8-speed transmission.

The 2016 Volvo V60 is ideal for buyers who want a sport sedan with more practicality—or a crossover with more athletic moves.

The 2016 Volvo V60 wagon looks nothing like the boxy, old 240 and 740 models many people imagine when they see the words "Volvo" and "wagon." In fact, with its steeply raked rear window the V60 looks less like a wagon and more like a sleek hatchback variant of the S60 sedan on which it's based.

The V60 benefits from the same, remarkably comfortable seats found in the S60 and XC60. They're heavily bolstered, and high-end models have power adjustment including a variable lumbar support. We’ve driven hundreds of miles in all three models, and these seats are among the best we ever occupied. Our sole concern is that the defined shape of the bolsters may be a bit snug for some Americans.

Rear seats are also well shaped and comfortable, with room for two adults or three smaller children, but there are a few caveats. There isn’t much legroom by mid-size standards, the cushion sits close to the floor, and the angle of the backrest is more severe than most passengers might be used to. The versatile rear seatback is split, 40/20/40, and has a pass-through for skis.

Volvo’s new Drive-E 2.0-liter inline-4 powers the front wheels in the base V60 T5. It makes 240 horsepower and 258 pound-feet of torque, though Volvo says an “overboost” mode will bump torque to 280 lb-ft for up to 10 seconds at full throttle. The automaker claims a swift 0-to-60-mph time of 6.1 seconds. To optimize fuel economy, the engine features a start-stop system that’s impressive for its unusually imperceptible operation.

The Drive-E engine is paired to an 8-speed automatic transmission that shifts smoothly and quietly under most conditions. An exception we noticed is rapid downshifts through three and four gears in search of the maximum power band during hard acceleration.

The only all-wheel-drive option for buyers who want the added traction is the T6 R-Design with a 325-hp turbocharged 3.0-liter inline-6 that's mated to a 6-speed automatic transmission.

All V60 models offer three drive modes: Normal, Sport, and Eco+, which cuts off the air conditioning and remaps the throttle and transmission for more efficient performance.

Fuel efficiency for the new V60 is at its best with the Drive-E engine and front-wheel drive, at 25 mpg city, 37 highway, 29 combined. The T6 R-Design earns 23 mpg combined.

Noise suppression is good, and the V60 handles like a sport sedan, with a firm but smooth ride. Centering action in the steering is good, and the V60 imparts a confident feel that makes it a worthy competitor to German sport wagons despite its not-as-prestigious Swedish badge.

From the driver's seat, the high-resolution screen that displays entirely virtual gauges is crisp, clear, and bright. Drivers can toggle through a variety of functions and settings, including route directions, audio-system information, vehicle performance data, and a number of other functions.

The dashboard itself was made of some of the firmest soft-touch material we've seen, with a subtle pattern in the black plastic rather like an animal hide. The sweep of black plastic comes off as somewhere between sober and severe, at a time when sport sedans are adding luxury touches--brushed chrome trim, contrasting stitching, et cetera. Some of that feel can be restored by the handsome two-tone leather upholstery option.

The classic Volvo "floating console" has quite a number of small rectangular black-plastic buttons, and while common functions like audio volume and mobile-phone control are on the steering wheel, some of the secondary functions require attention to find. That's about the only safety concern that anyone could raise about the V60, however.

Federal officials haven't rated the crashworthiness of the 2016 Volvo V60, but results for the closely related S60 sedan received across-the-board five-star ratings in 2016. The IIHS have rated the 2016 V60 with top "Good" scores across the board and have given the Volvo a Top Safety Pick+ designation, its highest award.

One final note: A button on the console let the driver flip down both outboard rear-seat headrests, opening up a full view out the tailgate window in the rearview mirror. It is a hugely helpful feature when the back seat is empty, and it's one that we think should be fitted to every new car.

1 Review
5 star
100%
4 star
3 star
2 star
1 star
Rate and Review your car for The Car Connection! Tell us your own ratings for a vehicle you own. Rate your car on Performance, Safety, Features and more.
Write a Review
2016 Volvo V60 4-Door Wagon T6 Polestar AWD

Better than Audi, BMW and MB for my money. Very impressive.

Added K-PAX Performance Exhaust System. Nice, but not a Porsche 911SC! Fuel economy not a concern. To soon to determine reliability.
people found this helpful.
Was this review helpful to you? Yes
Browse Used Listings
in your area
8.0
Overall
Expert Rating
Rating breakdown on a scale of 1 to 10?
Compare the 2016 Volvo V60 against the competition
Compare All Cars
Looking for a different year of the Volvo V60?
Read reviews & get prices
Related Used Listings
Browse used listings in your area