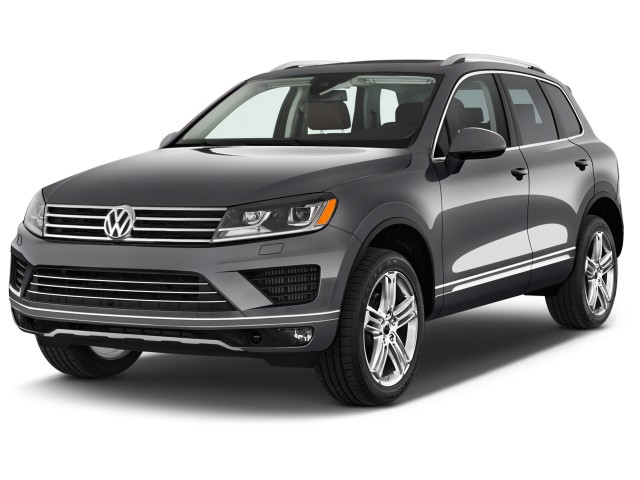 Even though it shares the same basic platform, the Porsche Cayenne offers a far sportier take on the family crossover, though it is also more expensive.

Expensive and fancy for a vehicle from a mainstream brand, the 2016 Volkswagen Touareg is also less expensive than some comparable luxury-SUV options.

The 2016 Volkswagen Touareg is a lavish vehicle with a premium price. Offered alongside the brand's more mainstream models, the Touareg is really more of a rival to models with luxury badges.

The Touareg isn't just the most expensive and luxurious model VW sells in the U.S. It's also the larger of two sport-utility vehicles in the company's lineup, and its basic underpinnings are shared with the Audi Q7 and Porsche Cayenne.

After a 2015 refresh, the 2016 Touareg drops its Hybrid model and adds an automatic post-collision braking system that automatically applies the brakes after a crash to help prevent further damage. Regular-grade fuel is now acceptable for the gasoline V-6, and VW has shuffled some equipment as well. The base model loses some features, but also drops in price by $2,000. The Lux and Executive models add 14-way power-adjustable ventilated front seats, and the Executive gets a suite of safety features that includes VW's surround-view camera system, lane departure warning, adaptive cruise control, and forward collision warning with automatic emergency braking.

Although the Touareg got more of a road focus with its last redesign, it remains relatively rugged. The goal then was to give it broader appeal—though the price remains a hangup, and VW's new three-row SUV expected next year will close the market gap, with more value and a lower price. The exterior styling is elegant, with less of a butch appearance. A slightly wider body, and somewhat longer wheelbase and length give the design more of a conventional crossover-wagon look (and functionally, more space), while the interior layout has a more upright orientation compared to other family crossovers.

The Touareg used to be grossly overweight, but with its last redesign VW made it lighter overall, and better-detailed inside. Astoundingly—through the use of advanced materials and techniques—it engineered about 450 pounds out of the vehicle, gaining up to 20 percent better fuel efficiency. It still offers way more truck-like ability than most other crossovers do, and more off-road and towing ability than most shoppers are likely to need. Think of that as a plus or a minus, depending on priorities.

The Touareg is still no crisp handler—few crossovers are, really—but it's as nimble and responsive as many of its rivals. The weight reduction is easily felt from one generation to the next, and the Touareg's steering is nicely weighted, with a calibration that's more suited to cruising down the highway than mixing it up in the twisties. Ride quality is quite good, but the high seating position accentuates smaller motions and choppy pavement.

Eight-speed automatic transmissions and full-time four-wheel drive are the building blocks in the powertrain department, while under the hood there is only a single engine option—for now. All versions get a conventional gasoline V-6, a 3.6-liter, 280-horsepower narrow-angle V-6 (VR6) that is plenty quick for most needs. Volkswagen has pulled its diesel-powered Touareg after the automaker revealed that those engines illegally cheated emissions tests.

Functionally, the Touareg's high seating position affords a good view out ahead. The front seats are excellent, but the rather tall and very wide center console tends to make the front area feel more confining than it needs to be. There's space for five, and the adult-sized rear bench can slide fore and aft through six inches of travel. You won't find a third-row seat like the one in Audi's longer Q7, but cargo space is quite good in the Touareg, with a power-folding arrangement that yields a fully flat cargo floor.

In all, the cabin appointments feel more in line with luxury rivals than the frugal set. It's in sync with the other VW models in design, yet it's appointed with nicely finished materials that share more in common with Audi in look and feel.

The Touareg continues to score well in IIHS testing, although it still hasn't been crashed by the NHTSA.

The EPA rated the only available powertrain in the Touareg at 17 mpg city, 23 highway, 19 combined. The gas V-6 lands at the bottom of the fuel-economy scale for the Touareg—and that's about par for the class, really.

The 2016 Volkswagen Touareg is conservative on the outside but luxurious on the inside.

From a design perspective, the modern Touareg fits in well with the current lineup of VW products. It's conservative, yet sophisticated, and its cabin is a step—and in some cases, several steps—above other mainstream SUV competitors.

Inside, the layout remains comparable to other rugged-luxury crossover designs, and the somewhat high seating position, upright orientation to the instrument panel, and high, wide center console all feel stylistically synergistic. Trims and materials are upscale, punctuated by matte-metallic bezels, chrome trim, and a choice of wood finishes.

On the outside, a wide body and somewhat longish wheelbase yield a conventional crossover-wagon look with plenty of space. The 2015 updates gave the body a sculptural quality, with some delicate details drawn into a conservative overall shape. What works best are the proportions: the headlights, the side glass, and the sheet metal are balanced. Other details include a four-bar grille up front, as well as fascias that include a chrome strip that mirrors those on the SUV's body sides.

The 2016 Volkswagen Touareg may have off-road chops, but it is first and foremost a refined road warrior.

When the Touareg was redesigned in 2011, VW trimmed 450 pounds from its weight, improving both fuel efficiency and driving dynamics. It's no longer as much of a tank, which we definitely see as a good thing.

The Touareg is still no crisp handler—few crossovers are, really—but it's as nimble and responsive as many of its rivals. The weight reduction is easily felt from one generation to the next, and the Touareg's steering is nicely weighted, with a calibration that's more suited to cruising down the highway than mixing it up in the twisties.

For those who want a hardier level of off-road capability, there's a Terrain Tech option package that brings specialized off-road modes and an adjustable air suspension.

Ride quality is quite good whether you go with the standard suspension or the air setup in off-road versions, but the high seating position accentuates smaller motions and choppy pavement.

VW discontinued the Hybrid this year and is legally blocked from selling the diesel model until it's fixed, which means there's only one powertrain available. The Touareg comes with a V-6 backed by an 8-speed automatic and four-wheel drive. All versions get a 3.6-liter, 280-horsepower narrow-angle V-6 (VR6). The gasoline V-6 in the base Touareg is plenty quick, thanks in part to the 8-speed, which keeps revs up when you need it (it's not much of an engine for low-end torque), and unless you're a green-minded shopper with patience to wait for a (possible) hybrid or diesel to reappear, your options are limited.

The Touareg's cabin is quiet and richly detailed, and it has plenty of space for five and their stuff.

Functionally, the Touareg's high seating position affords a good view out ahead. The front seats are excellent, but the rather tall and very wide center console tends to make the front area feel a bit cramped. There's space for five, and the adult-sized rear bench can slide fore and aft through 6 inches of travel. You won't find a third-row seat like in the Audi Q7, but cargo space is quite good, with a power-folding arrangement that yields a fully flat load floor.

The cabin feels more in tune with more luxurious SUVs in the segment. It's styled like the rest of the current Volkswagen lineup's interiors, yet it's appointed in a way that feels more like an Audi inside. The materials are higher quality than you expect in a a Volkswagen, and the quiet ambiance is also above the norm for the brand.

An impressive set of safety features should team with a sturdy structure to earn top safety scores, but not all crash tests have been conducted.

The 2016 Volkswagen Touareg has what it takes to be one of the safest vehicles on the market, with a combination of a sturdy structure and plenty of advanced safety technology that could help avoid an accident. However, not enough crash tests have been conducted to confirm it as one of the safest.

The Touareg comes standard with nine airbags, along with all of the standard features that are typical among crossovers, but it's the safety-tech options that are most noteworthy. The Touareg is offered with lane-keeping assist, blind-spot monitors (called Side Assist), adaptive cruise control, and forward-collision warning with automatic emergency braking. Adaptive bi-xenon headlamps, a rearview camera, and an Area View monitor with four cameras are also available.

While the federal government hasn't yet put the Touareg through its crash-test program, the IIHS has given it top "Good" scores in frontal, side, rear, and roof-strength tests. It hasn't been subjected to the small-overlap test, and therefore is not eligible for the Top Safety Pick+ award.

Used Volkswagen Touareg for sale near

The Touareg has a luxury feel, but lacks some luxury features buyers might expect at these prices.

Despite the Touareg's mainstream badge, its options and equipment are on par with many of the more luxurious alternatives on the road today. Whether or not those features justify the luxury price is your decision—we think a moderately equipped V-6 Touareg makes for a decent value, while higher trim levels are expensive enough to consider other options for the money.

The V-6 is offered in Sport, Lux, and Executive trims, all with four-wheel drive.

The Touareg is lacking somewhat in connectivity and infotainment options. And unlike most of VW's less-expensive models, the Touareg hasn't yet been outfitted with the CarNet system, which is similar to GM's OnStar and offers diagnostic and convenience features through an associated smartphone app.

The Hybrid goes away this year, but it wasn't particularly efficient and neither are the gasoline or even the diesel powertrains.

Volkswagen dropped the Hybrid version of the Touareg for 2016 and its diesel version is awaiting a fix from the automaker after it admitted that those cars cheated through emissions tests.

That leaves one engine available in the 2016 VW Touareg. At an EPA-rated 17 mpg city, 23 highway, 19 combined, the gas V-6 lands at the bottom of the fuel-economy scale for the Touareg—and that's about par for the class, really. It should be noted that the gasoline engine is now approved for use with regular-grade gasoline.

You won't find a ton of torque in the V-6 models, but they're plenty strong and have willing acceleration if you're not frequently towing.

1 Review
5 star
100%
4 star
3 star
2 star
1 star
Rate and Review your car for The Car Connection! Tell us your own ratings for a vehicle you own. Rate your car on Performance, Safety, Features and more.
Write a Review
2016 Volkswagen Touareg 4-Door TDI Lux

The Touareg TDI is the best bang for the buck.