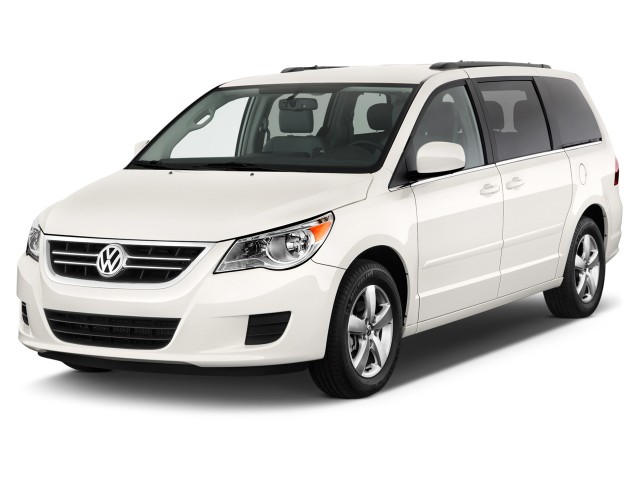 The Routan's been a slow seller, so deals could be good. Just remember, there's no fold-away second-row seat like the ones you'll find in the similar Dodge Grand Caravan and Chrysler Town & Country.

The Volkswagen Routan isn't very different from the Chrysler minivans--and that means top safety performance and features, with a little less than best-in-class flexibility.

The Volkswagen Routan minivan is something drivers don't see very often. It's a slow seller, for one, but it's also a pretty pure example of badge engineering, something that's largely gone away with the demise of Plymouth, Oldsmobile and Mercury.

The Routan's essentially identical to the Dodge Grand Caravan and Chrysler Town & Country, with a unique VW grille and some distinctive interior trim. It used to work in the Routan's favor, before 2011, when the Chrysler minivans had dreadfully plasticky interiors. That's no longer the case, and now, picking the Routan's styling is more a matter of taste than of quality. It's still among the more boxy minivans, especially in light of the latest Nissan Quest and Honda Odyssey.

Last year, the Routan joined the Chrysler minivans in adopting a single new powertrain. The 3.6-liter Pentastar V-6 is teamed up with a six-speed automatic, and the front-drive minivan isn't offered with all-wheel drive. Though we haven't driven the Routan, which has minor differences in suspension tuning, we've spent a lot of time behind the wheel in both the Chrysler and Dodge minivans, and can report a pleasant driving experience. The Pentastar's a fairly brisk performer, and steering is quick and not too light, by minivan standards. In the Chryslers, the ride quality is very good, and body roll isn't as overwhelming as in the past, but the Chrysler vans do bound a bit when they encounter a series of long bumps in the road. We'll report back if we find differently in the Routan.

Inside the VW van, there's an important seating issue that casts the Routan more in line with the Sienna and Odyssey. Chrysler keeps a great feature to itself: on the Grand Caravan and Town & Country, the second-row seats can be folded flat into the floor (Stow 'N Go, according to the marketing department), or left up, with the in-floor space instead dedicated to other storage. In the Routan, the second-row captain's chairs fold and slide forward, but don't disappear in the floor, as the seats in the Honda and Toyota do. The Routan's third-row seat does fold flat, expanding cargo space and giving the Routan competitive cargo-carrying capability. We've been pleased to find third-row seat room in the Chrysler vans is nearly adult-sized, and expect no different from the Routan.

The Chrysler vans have scored top safety ratings from the IIHS, which calls them a Top Safety Pick, and it applies to the structurally identical Routan. The Routan comes with the usual airbags and stability control, and blind-spot monitors and a rearview camera are offered, along with Bluetooth.

The Routan lacks some of the Chrysler minivans' advanced tech features, such as in-car wireless Internet and Sirius BackseatTV. However, VW does offer power sliding doors and a power tailgate; a rear-seat DVD entertainment system with twin LCD screens; a navigation system; a sunroof; satellite radio; a USB port; and a premium audio system. There's a slight premium that comes with the Routan versus Dodge's Grand Caravan, but to some minivan drivers, the VW badge and slightly nicer interior might make up for some of the missing flexibility and features.

We'll update this review once the Routan is available for a test drive. For now, see our in-depth review of the 2010 Volkswagen Routan, and if you're curious about new powertrains, take a look at our first drive of the latest Dodge Grand Caravan.
Continue Reading

Be the first one to write a review on 2012 Volkswagen Routan
Rate and Review your car for The Car Connection! Tell us your own ratings for a vehicle you own. Rate your car on Performance, Safety, Features and more.
Write a Review
USED PRICE RANGE
$6,000 - $13,998
Browse Used Listings
in your area
7.8
Overall
Expert Rating
Rating breakdown on a scale of 1 to 10?
Compare the 2012 Volkswagen Routan against the competition
Compare All Cars
Looking for a different year of the Volkswagen Routan?
Read reviews & get prices
Related Used Listings
Browse used listings in your area
See More Used