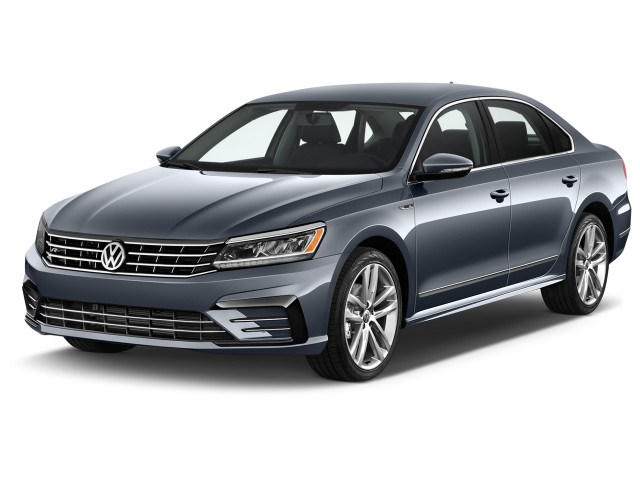 The VW Passat SE R-Line is about sporty looks only.

The 2019 Volkswagen Passat is roomy and has a luxurious ride, but rivals have eclipsed it in almost every other way.

The 2019 VW Passat has let itself go. It’s surrounded in the VW showroom by crossover SUVs with room for the whole family and a rugged image.

The 2019 Passat has its virtues, but a pared lineup this year suggests that its maker has given up, at least until a redesigned model arrives, possibly as soon as next year.

We rate the Passat at 6.0 out of 10 points. It’s roomy, has a good ride, and a lot of standard gear, but it shows its age in its subpar crash-test scores and its limited lineup. (Read more about how we rate cars.)

For 2019, the Passat line shrinks to just two trims: Wolfsburg and the SE R-Line, both powered by a 2.0-liter turbo-4 rated at 174 hp that sends power to the front wheels. Last year’s V-6 engine and sporty GT trim level are gone.

The Passat’s turbo-4 gives it good manners. It’s smooth and responsive, if hardly thrilling. The same could be said about its handling, which is safe but short of entertaining. The Passat rides best on its standard 17-inch alloy wheels, but the optional 18s don’t firm things up too much.

It’s inside where the Passat earns its keep. Its front seats are firm and supportive and its rear seat has LeBron levels of legroom. Outward vision is among the mid-size sedan segment’s best.

Its interior is an exercise in Teutonic restraint, with little flair but a clean, cohesive look. Good infotainment systems with big, crisp displays and standard Apple CarPlay and Android Auto compatibility up its tech game.

The Passat comes standard with a slew of active safety features, but its crash-test scores don’t impress. Both the IIHS and the NHTSA have mixed things to say about its crashworthiness.

Eschewing the “floating” rooflines, coupe-like silhouettes, and deep contours seen on most of its rivals, the 2019 Passat aims for mainstream. Its three-box shape is simple and unadorned aside from some hints of chrome scattered about.

Up front, the Passat wears a wide grille with a prominent VW badge. Sharp creases on its sides give way to a tall greenhouse for excellent outward vision. At the rear, the Passat repeats the big VW logo and hints of chrome. The SE R-Line trim has a zippier-looking body kit and 18-inch wheels.

Inside, the Passat is an exercise in restraint. Its low dash affords terrific outward vision, but controls are low and out of the driver’s immediate sight line. Aside from an analog clock, an analogous touch, the Passat’s interior is even more conservative than its exterior.

The 2019 VW Passat has a cosseting ride, but it’s no speed demon.

With just one powertrain on offer, the 2019 VW Passat has a simple performance story to tell. Its 2.0-liter turbo-4 provides adequate go, but it’s the smooth ride that elevates this sedan above average. We rate the 2019 Passat at 6 out of 10 points. (Read more about how we rate cars.)

Last year’s optional V-6 is gone, leaving a 2.0-liter turbo-4 rated at 170 hp as the sole engine under the Passat’s hood this year. The smooth 4-cylinder pairs well to its standard 6-speed automatic transmission and shuttles power to the front wheels. It can be slow to build power immediately from a stop, but the turbo-4’s 184 pound-feet of torque gives it good passing grunt on two-lane roads and when merging onto a highway.

Base Passat Wolfsburgs ride on 17-inch wheels that give it a luxury-grade ride. The optional 18-inchers firm things up, but not unduly so.

A sporty three-spoke steering wheel suggests that the Passat should be a corner carver. It’s confident and composed, but not entertaining. Little feel makes its way to the leather-wrapped wheel and the Passat can lean considerably when pushed.

The 2019 VW Passat has room to spare inside.

The 2019 VW Passat is just the ticket for long-legged families. Its front and rear seats are firm with excellent support and plenty of legroom. We rate it at 7 out of 10 accordingly, giving it a point above average for its front seats and another for its capacious second row. (Read more about how we rate cars.)

All 2019 Passats have hard-wearing synthetic leather upholstery—not real hides—covering their seats. Up front, the Passat has firm, supportive seats with a wide range of adjustment. Rear-seat riders have 39.1 inches of legroom, but good packaging and a well-contoured rear bench makes the sedan feel even more spacious. Three-abreast seating can be tight for broad-shouldered riders, however.

The Passat’s trunk holds 15.9 cubic feet of suitcases, a figure that’s about average for its class.

Though low-sheen soft-touch trim adorns the Passat’s dashboard and its front seat door panels, its interior doesn’t impress for its furnishings. It lacks the imaginative materials, color coordination, and touches such as stitching seen in many competitors.

The 2019 VW Passat has a lot of safety gear, but its crash-test ratings aren’t top notch.

A few blemishes from on its crash-test report card reveal the age of the 2019 VW Passat’s design. We rate it at 6 out of 10, awarding it points for a 5-star rating from the NHTSA and standard automatic emergency braking, but we dial one back for a concerning “Marginal” in one of the IIHS’ tests.  (Read more about how we rate cars.)

The feds grant the Passat five stars overall, albeit four stars for frontal crash and four for rollover.

The NHTSA isn’t as generous. The Passat earned “Good” for most tests, but “Marginal” for the challenging small-offset frontal crash test on the passenger’s side. That demanding test replicates impact with a stationary object such as a telephone pole. The IIHS also said that the Passat’s headlights rate “Poor” and that its automatic emergency braking system scored “Advanced,” its mid-level score.

Used Volkswagen Passat for sale near

The 2019 VW Passat comes with everything you need, but that’s about it.

Don’t look for opulence when it comes to the 2019 VW Passat. Its lineup was pared to just two trim levels for 2019, making decisions easy but customization potential limited. We rate it at 6 out of 10 on account of its generous standard equipment and an extensive warranty, with a point deducted for a small standard infotainment screen.  (Read more about how we rate cars.)

The base Passat Wolfsburg includes automatic emergency braking, a 6.3-inch touchscreen for infotainment with Apple CarPlay and Android Auto compatibility, synthetic leather upholstery, keyless ignition, and blind-spot monitors for about $24,000. A package with 18-inch alloy wheels and a moonroof is its only option.

Stepping up to the SE R-Line nets buyers LED headlights, an upgraded 8.0-inch touchscreen for infotainment with native navigation, 18-inch alloy wheels, adaptive cruise control, active lane control, Fender-branded speakers, and a trunk that can be opened with a swipe of a foot under the rear bumper.

All Passats benefit from a 6-year, 72,000-mile bumper-to-bumper warranty that can be transferred to subsequent owners.

Our advice: stick with the base Wolfsburg, which is well-equipped for the money.

We have good things to say about the 2019 VW Passat’s fuel economy ratings—enough, even, to make us (mostly) forget about Volkswagen’s “Dieselgate” debacle a few years ago.

We rate the 2019 Passat at 6 out of 10 on account of its EPA ratings. But we’ve seen Passats do even better in real-world driving. (Read more about how we rate cars.)

In its testing, the EPA found that the Passat rated 25 mpg city, 36 highway, 29 combined. We’ve seen nearly 40 mpg on the highway, which puts the Passat toward the top for mid-size sedans. Credit here is due to good gearing on its responsive 6-speed automatic that helps keep engine revs low at higher speeds.

Be the first one to write a review on 2019 Volkswagen Passat
Rate and Review your car for The Car Connection! Tell us your own ratings for a vehicle you own. Rate your car on Performance, Safety, Features and more.
Write a Review
USED PRICE RANGE
$13,991 - $23,900
Browse Used Listings
in your area
6.0
Overall
Expert Rating
Rating breakdown on a scale of 1 to 10?
Compare the 2019 Volkswagen Passat against the competition
Compare All Cars
Looking for a different year of the Volkswagen Passat?
Read reviews & get prices
Related Used Listings
Browse used listings in your area
See More Used