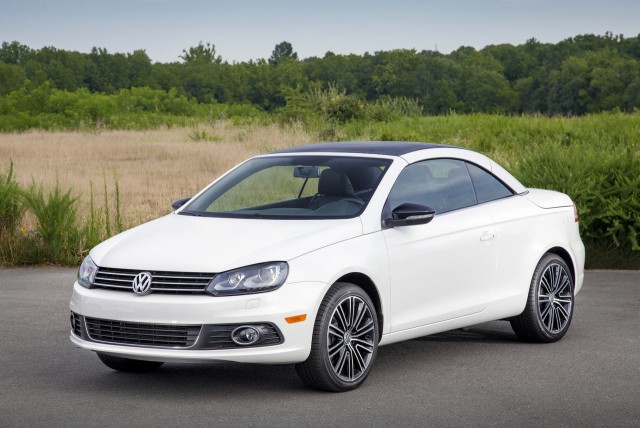 We really mean it this time: 2016 is the last model year in which VW will sell the Eos.

It's your last chance to get a Volkswagen Eos in 2016; it's refined and comfortable, but there's more fun in its road manners than in its sheet metal.

While the Volkswagen Eos was supposed to be discontinued after the 2015 model year, Volkswagen has brought it back one more time for 2016, in a sole Komfort configuration.

The 2016 Eos is a niche player in the market. It's a very well-rounded convertible that delivers performance, practicality, comfort, and relative affordability in a way that other convertibles simply don't. It's rivaled only by the new Buick Cascada in that respect.

Its exterior might not suggest that there's much going on here, but if you'll take the time to look inside and take a spin, we think you'll find that the VW Eos has charm not easily found in convertibles in its price range.

The Eos wins points for being attractive regardless of whether the top is up or down—a feat for four-seat convertibles—and its styling is softer than just about any other car in the segment. The relationship to the VW Golf is obvious from nearly every angle, so it never looks awkward or unattractive. It's handsome and straightforward, but there's just not much fun to be found in the design. It's about as conservative as you can get with a convertible. Inside, the well-organized cabin, with its high-quality trims and materials, makes a much more charming impression.

There's way more charm to be found once you're in the driver's seat. Every Eos sports a 200-horsepower, turbocharged 2.0-liter inline-4, paired with a dual-clutch gearbox. The automatic changes gears smoothly yet very quickly, doubling down on the engine's robust torque curve and bringing out a zippy, responsive feel. Handling is light and responsive, and overall this is a fun-to-drive small coupe.

In a class of overweight convertibles, the Eos is one of the lightest, at 3,500 pounds; and it handles that way. The Eos handles with more finesse than its relaxed boulevard-cruiser looks imply. It's firm enough to power through tricky corners, planted in higher-speed sweepers, and remarkably secure-feeling for a front-driver. Dynamically, it's no sports car, but with quick steering, strong, reassuring brakes, and the responsive DSG transmission, it feels very eager.

Interior comfort is superb—especially if you're a larger adult and if you're sitting in the front seats. Compared to Volkswagen's hatchbacks like the Golf—and even the Beetle—the driving position is a bit more laid back, and the seats feel a little more plush and better bolstered, as if this were truly making a play for the luxury-coupe market. The back seat is tight—more like that of a cozy 2+2—but it's easier to get into and out of than in most rival models, and that itself makes it quite usable for an evening cruise with the kids. Cargo space is limited—in part because of the neat folding top—but you can carve out a few extra cubic feet by flipping up a movable trunk liner and leaving the top up.

Transitioning from coupe to convertible is really one of the things the Eos does best. Its retractable hardtop arrangement is tight, quick, and nearly flawless. In less than 25 seconds, eight electric motors work together, unlatching the roof from the windshield header, flipping, folding, and tucking it neatly under the metal trunklid. The design looks neat, and it results in a handsome side profile up or down. We have noticed that wind turbulence isn't as great as it could be at speed, and the wind deflector itself is quite noisy.

The Eos has a couple of especially important features that aren't included in most convertibles. A pop-up head protection system in the Eos, which automatically deploys when the car senses a rollover is imminent, is a standout in this more cost-conscious end of the convertible market—employing a host of sensors to deploy just before it's needed, when a rollover is anticipated. There's also an optional Park Distance Control and a Technology Package that includes upgrades to the lighting system—including an adaptive, swiveling function for the headlights.

The Eos comes with power features, cruise control, and the power-retractable hardtop.

Pricing may prove a sticking point for some shoppers, though; as the base Eos starts just a few thousand dollars higher than where we think it should. For 2016, it starts at around $32,000, much higher than a Ford Mustang convertible.

The Eos fares well on gas for a convertible—within range of the smaller, lighter Mazda Miata. It has an EPA rating of 22 mpg city, 30 highway, 25 combined, according to the EPA.

1 Review
5 star
4 star
100%
3 star
2 star
1 star
Rate and Review your car for The Car Connection! Tell us your own ratings for a vehicle you own. Rate your car on Performance, Safety, Features and more.
Write a Review
2016 Volkswagen Eos 2-Door Convertible Komfort