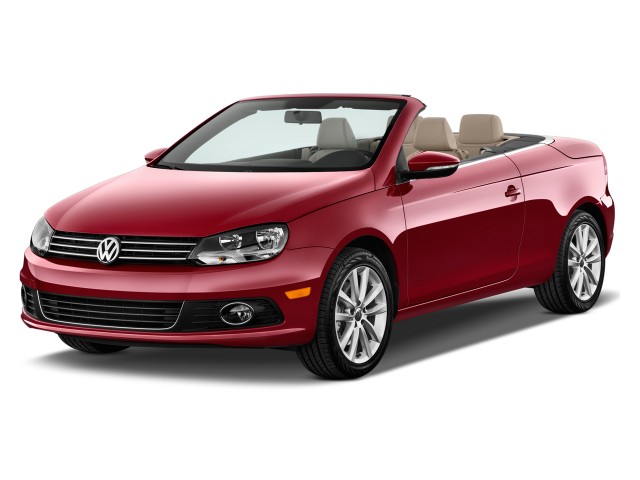 A new luxury edition of the Eos gets its own distinctive leather trim and luxury features this year.

The 2012 Volkswagen Eos convertible underplays its hand too much--the styling's not nearly as grabby as its turbo power and its smart handling.

A step up from the budget-minded four-seat Chrysler 200 convertible, but remote as it can be from something more evocative like a Mustang, Camaro or MINI Cooper convertible, the Volkswagen Eos glides into another model year with few changes. The Eos is a cruiser at heart, without the overt performance edge of the Miata or Audi TT, even, but it's more flamboyant with power and handling than you might suspect, especially if your first encounter's a top-up one.

Let's be blunt. The Eos looks bland when the roof is raised. With hints of the old VW Cabrio from years ago, and too little of the tightly drawn curves on the European-market Scirocco coupe, the Eos can look a little thick and ungainly when its three-piece power folding top is in passenger-protection mode. Some of us really like its neatly finished, straightforward looks, but the market has spoken. However, when the top is lowered--it's a single push of the button and 25 seconds away--the Eos gets a little more sexy. Maybe it's the view into the cabin that counts--it's one of VW's typically high-quality efforts, and the controls and materials are streamlined and of high quality, with just a few touches of brightwork and a tidy look just a bit more rakish than that of the current Golf or GTI.

There's just one drivetrain offered with the Eos, and it teams VW's excellent 2.0-liter, 200-horsepower turbocharged four-cylinder with either a six-speed manual or the preferred dual-clutch (DSG) automatic transmission. With either gearbox, the front-drive Eos feels strong and responsive, thanks mostly to the turbo's well-timed boost, which comes on low and stays very steady throughout a wide part of the powerband. The Eos' relaxed look belies handling that's better than the profile may suggest: the suspension's firm enough to hang tough in tricky corners, and the Eos feels planted in higher-speed sweepers. It's remarkably secure in feel for a front-drive convertible, though dynamically, it's no sports car. The brakes are strong and reassuring, too, which plays along well with its eager feel.

The Eos is quite comfortable, if you're a larger adult and if you're sitting in the front seats. The driving position is a bit more laid-back than in the Golf, and the seats feel a bit more plush and better bolstered than in that basic hatchback. While it can carry four adults, the Eos' back seat feels more like the buckets in a cozy 2+2. Rear-seat legroom is minimal, and with the roof up, the Eos can feel confining back there. Trunk space isn't so generous either, though when the roof is raised, a movable trunk liner can be flipped up to carve out a couple more cubic feet of room.

Like the top on the Volvo C70 convertible, the Eos' roof tucks away quickly, using eight motors to fold its three panels into place in under 25 seconds. The convertible roof also has a setting that opens the front section only like a sunroof.

Safety scores from the IIHS rank the Eos as "good" in front and side impacts. The roof mechanism is backed up by pop-up roll bars that deploy if a rollover is detected. Parking sensors are an option, but the Eos doesn't come with a rearview camera.

The Eos comes with the usual power features; climate control; the power-folding hardtop; and an AM/FM/CD player. High-end options include a sport package; a Dynaudio surround system; satellite radio; Bluetooth; and hard-drive-based navigation with music storage.

Sedate, sober, conservative--they're all words that describe the Volkswagen Eos pretty well. For most convertibles, that would be a problem--would anyone buy a wallflower droptop Mustang? But for the Eos, it's an underline to its softer, more feminine appeal. We're divided here on exactly how the styling affects how we feel about the Eos overall; some of us call it a neat, pinned-down design that gets better on the road, while the rest of us think it's bland when it doesn't have to be. Whatever its faults, it's still clearly related to the VW Golf that shares some of its architecture, and even with the top up, the design never veers into awkwardness--which is more than we can say about the competitive Chrysler 200.

Review continues below
Inside it's a different story; its interior feels a step above most other Volkswagen models, with a streamlined look and upgraded materials. It's hardly sexy, but it's nicely detailed with just a bit of brightwork, but not too much, and a neat, simple look that's slightly more rakish than in the Golf and GTI.
8

Light and quick on its feet, the Eos has one of VW's best drivetrains.

There's no choice with the Eos, at least when it comes to engines. Every one sports a 200-horsepower, 2.0-liter four-cylinder. With the addition of turbocharging, it's become one of VW's best powerplants and known for years for its strong mid-range pull and responsiveness. In the front-drive Eos, it can be teamed up with a six-speed manual, with the usual VW notchy feel, or the dual-clutch gearbox VW calls its DSG. The DSG's another house favorite, as it changes gears smoothly and very quickly, doubling down on the drivetrain's acceleration and zippy feel.

Review continues below
The Eos handles with more finesse than its relaxed boulevard cruiser looks imply. It's firm enough to power through tricky corners, planted in higher-speed sweepers, and remarkably secure-feeling for a front-driver. Dynamically it's no sports car, but with quick steering, strong, reassuring brakes, and the responsive DSG transmission, it feels very eager. That's no mistake; in a class of overweight convertibles, the Eos is one of the lightest, at about 3,500 pounds.
8

Two passengers will love the VW Eos' supple interior and folding hardtop; two more will put up with skimpy leg room for a while, right?

Volkswagen's Eos is one of the few four-seat convertibles priced below $30,000. The Mustang and Chrysler 200 are still out there, too, but we think the Eos is the most comfortable of all, even though it's still basically a 2+2.

The front seats are the place to be in the Eos. The driver gets a great bucket seat with a driving position that's a bit more laid-back than in, say, the Passat. Both front seats have better shaping and bolstering than on the related Golf hatchback, too.

In the back seat, there's enough space to fit medium-sized adults for short trips, but it's still better used as luggage space for those up front. There's not much leg room in back, which forces the driver and front passenger to move their seats up close to the dash.

Volkswagen's folding hardtop wins over the Chrysler 200's optional hardtop. It just doesn't get any better than this. In less than 25 seconds, a total of eight electric motors work in conjunction to unlatch the roof from the windshield header and flip and fold it under the metal trunk lid. The convertible roof also has a setting that opens the front section only like a sunroof. And with the top stowed away, cargo capacity remains a decent (for the class) 6.6 cubic feet, which is enough for an overhead-bin-sized suitcase.

Otherwise, the story is pretty impressive inside. Materials and trims are top-notch, with more premium look and feel that's only rivaled in VW's product line in the CC sedan (and possibly the Touareg). Ride quality is firm but supple enough to soak up medium-sized potholes. Some road noise is present, but it's not any more than you'd notice in sporty coupes that don't have the Eos's convertible top.

Every Volkswagen Eos comes with standard anti-lock brakes and stability control, as well as airbags that protect the head and upper body on front passengers. The Eos also has a pop-up roll bar tucked behind the rear seats.

What it doesn't have is a complete set of crash-test results. The Insurance Institute for Highway Safety (IIHS) says it's a "good" performer in all its tests, but because it's a convertible, it doesn't grant it Top Safety Pick Status. On the other hand, the National Highway Traffic Safety Administration (NHTSA) hasn't tested the Eos at all.

The pop-up head protection system in the Eos, which automatically deploys when the car senses a rollover is imminent, is a standout in this more cost-conscious end of the convertible market—employing a host of sensors to deploy just before it's needed, when a rollover is anticipated. Additional safety-minded goodies include an optional Park Distance Control and a Technology Package that includes upgrades to the lighting system (an adaptive swiveling function).

Used Volkswagen Eos for sale near

There's not much wow factor in the Eos' options list, but it's outfitted with the right standard features.

The VW Eos doesn't have some of the latest technology features on its options list, but the list of standard features is fairly long.

Buyers can choose between the Komfort or Lux versions of the Eos. On either one, there's standard power features, including power windows, locks, mirrors, and of course, the power-folding hardtop. VW also includes standard Bluetooth, a leather-wrapped steering wheel with audio controls, and an LCD touchscreen that controls the stereo system.

Vinyl upholstery--"leatherette" is the marketing word--is the standard upholstery on Komfort models, but Lux editions have a choice of leather trim and a power driver seat. The Lux also gets a 600-watt, ten-speaker Dynaudio premium surround system, a navigation system with hard-drive music storage, Sirius Satellite radio, and SD memory-car slot, and steering-wheel controls.

iPod connectivity is a stand-alone option, but there are several packages, including a Technology Package that includes adaptive front headlamps. Also available on the Lux is a sport suspension and larger 18-inch alloy wheels.

Four-seat convertibles don't get much more efficient than the VW Eos.

Volkswagen launched the Eos in 2007 with a choice of four- and six-cylinder engines, but it's since trimmed the lineup to include just the turbocharged four, with a choice of manual or DSG automatic transmissions.

The four-cylinder produces great EPA ratings for the Eos, one of the few four-seat convertibles that gets fuel economy of more than 30 mpg. The manual-transmission models earn 21/31 mpg, while versions that shift via the automatic transmission have an EPA rating of 22/30 mpg.

The Eos' combined ratings are better even than a Mazda Miata, and that makes the Eos one of the greenest convertible picks on the market.

1 Review
5 star
100%
4 star
3 star
2 star
1 star
Rate and Review your car for The Car Connection! Tell us your own ratings for a vehicle you own. Rate your car on Performance, Safety, Features and more.
Write a Review
2012 Volkswagen Eos 2-Door Convertible Komfort SULEV

Best car I Ever owned.