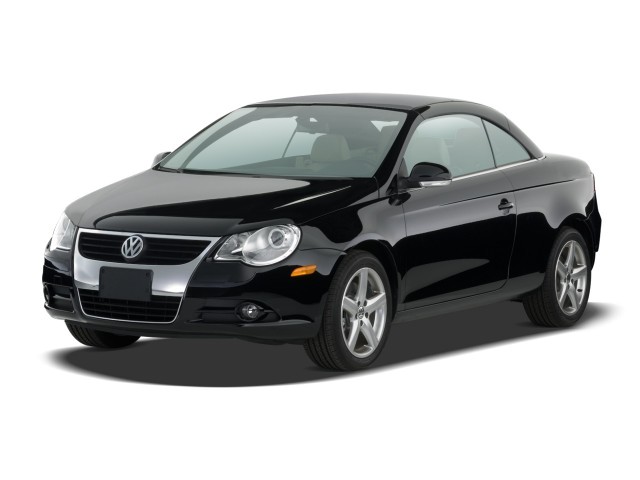 The 2008 Volkswagen Eos has as an option the clever dual-clutch transmission. It lacks a manual clutch pedal, but uses electronics to shift its clutches faster than a manual can--while still allowing the driver to choose gears manually. It's a new type of transmission that's also going to be offered on some Dodge, Mercedes, and BMW products, and it's everything it's hyped to be.

The 2008 Volkswagen Eos has a sunny disposition and four real seats, along with great handling and VW's dual-clutch gearbox.

The convertible enthusiasts at TheCarConnection.com studied a wide range of road tests to write this definitive review of the 2008 Volkswagen Eos. TheCarConnection.com's editors also drove the 2008 Volkswagen Eos to help you decide which reviews to trust where opinions differ, as well as to add more impressions and details and to provide you with the best information.

The 2008 Volkswagen Eos is a four-seat, folding-hardtop convertible that's named for the Greek goddess of the dawn. While its body isn't quite as sexy as "goddess" implies, the Eos has a dynamic look to it, especially with the top down. It's a little too matronly for its capabilities. Inside, though, the Eos's cabin sports GTI style and enviable Volkswagen materials, and room enough even for adult males in back.

Two engine choices are available in the 2008 Volkswagen Eos: a 2.0-liter, 200-horsepower turbocharged four-cylinder with plenty of available torque, ample thrust, and a 0-60 mph time of 6.4 seconds with a six-speed manual transmission. Volkswagen's brilliant dual-clutch automatic is available--it can be shifted like a manual without the clutch pedal. There's also a 250-hp 3.2-liter V-6, with a choice of six-speed manual or dual-clutch transmissions. Fuel economy is strong at 21/30 mpg with the four, to 19/26 mpg with the dual-clutch V-6. Handling is one of the Eos's best features; it's relaxed enough so that you enjoy the convertible experience, but firm enough to charge around your favorite roads.

The convertible roof in the 2008 Volkswagen Eos uses eight electric motors to unlatch from the windshield header and flip and fold under the metal trunklid in 25 seconds. The cargo area is a manageable 6.6 cubic feet with the top stowed, larger than that in the Pontiac G6 and Volvo C70 hardtop convertibles, but it's still kind of small. The convertible roof also has a setting that opens the front section like a sunroof.

Sixteen-inch wheels and an active, pop-up roll bar are among the standard features on the 2008 Volkswagen Eos. Options include a navigation system and an upmarket audio system.

Stability and traction control are standard on all Eos convertibles, as are head/thorax airbags that deploy from the front seats. The 2008 Volkswagen Eos gets a rating of "good" from the Insurance Institute for Highway Safety (IIHS) for front and for side impacts.

The 2008 Volkswagen Eos pushes all the right aesthetic buttons, but it’s not overly daring.

The 2008 Volkswagen Eos is a four-seat, folding-hardtop convertible named for the Greek goddess of dawn. The name goes further than the shape. While it’s well-detailed and nicely executed, the Eos--Volkswagen’s most expensive convertible--is pretty ordinary-looking.

Cars.com likes the “clean, sporty look” of the Eos; Volkswagen gets nods from Kelley Blue Book for its “attractive but understated styling.” Forbes Autos appreciates that the 2008 Eos "comes with a less-intrusive windshield pillar design that makes front-seat entry and exiting easier than in the typical ragtop,” and praises its “curvier, more coupe-like profile than most convertibles.” Automobile magazine calls it “high style” and says it “makes every girl a starlet, the centerpiece of her own fashion layout in Lucky.” Still, the editors of TheCarConnection.com point to the Pontiac G6 Convertible, which looks far more distinctive in the hardtop-convertible class, when grading the Eos’s shape.

The 2008 Volkswagen Eos is handsomely designed inside, though. ConsumerGuide lauds the "clear gauges [that] complement mostly handy, intuitive controls." The controls are placed well, and there’s a combination of lines and textures that Volkswagen seems to have mastered long ago, while other car companies still try to match it.

Convertibles, by nature, have a split personality when it comes to styling. Their character can change dramatically whether the top is up or down. The 2008 Volkswagen Eos avoids some of this by using a hardtop convertible roof instead of the typical cloth number. The designers at Volkswagen have imbued the Eos with clean exterior styling in both top-up or top-down configurations, something that can’t be said of most soft-top convertibles, nor many hardtops, either.

Due to the added weight and lost structural rigidity that is inherent in a convertible, performance numbers usually suffer compared to a comparable fixed-roof vehicle. However, the 2008 Volkswagen Eos manages to perform well in outright speed and in handling.

In the Eos, Volkswagen offers a choice of two engines: a 200-hp, 2.0-liter four-cylinder and a 250-hp, 3.2-liter V-6. Both engines provide admirable performance, and Cars.com finds that even the lower-output 2.0-liter engine "responds quickly, and its power just keeps on coming." In the higher-end Eos, Volkswagen’s 250-hp V-6 engine delivers even quicker acceleration numbers through its six-speed automatic transmission that can be shifted manually if the driver desires.

The transmission options available on the Eos were highly praised in reviews read by TheCarConnection.com. Kelley Blue Book lists the "quick- and smooth-shifting dual-clutch transmission" as one of its favorite features on the 2008 Eos; Volkswagen’s "automatic can be slow to downshift in standard drive mode but is alert in its sport setting," ConsumerGuide says.

Aside from engine and speed characteristics, the 2008 Volkswagen Eos handles itself very well on the road, especially for a convertible. Forbes Autos claims that in the Eos, Volkswagen “delivers decent handling" along with "secure stopping power." Edmunds concurs, noting that "its steering is fairly quick and its handling is capable."

A high-quality interior and decent luggage space give the 2008 Volkswagen Eos a leg up on competition.

The 2008 Volkswagen Eos has more room than the typical four-seat hardtop convertible, and it benefits from Volkswagen’s class-leading interior materials and assembly. Truth be told, though, there’s still not enough room in the backseats to make adult passengers comfortable.

Inside the Eos, Volkswagen’s interior quality is typically top-notch. In a testament to the car's undeniable quality, Kelley Blue Book feels that "the Eos' interior is more attractively designed and better put together than those of some cars we've driven with sticker prices twice as much." Other reviewers felt the same way about the Eos's handsome interior, and found little fault with the car's quality. Consumer Reports recently chose the Eos as its favorite four-seat hardtop convertible, besting the likes of the BMW 335i, based in part on its quality.

Comfort doesn't quite live up to exceptional quality scores in the Eos; Volkswagen earns an 8 out of 10 in this category. Popular Mechanics observes that the Volkswagen Eos's innovative roof causes the rear occupants to be "cramped, both in shoulder space and, with the top up, headroom." While cargo space is very good with the top down and there is ample room up front in the Eos, Volkswagen does get marked down for its road noise characteristics. Even with the top up, ConsumerGuide feels that the Eos "[suffers] from noticeable wind noise," and "some testers complain of rear-tire roar on coarse pavement."

Reviewers from all auto Web sites were awestruck by the complex motions of the Eos’s folding hardtop. Edmunds notes that several competing automakers offer hardtop convertibles, but their "execution is nowhere near as polished as the VW's." Kelley Blue Book also admires the "25-second mechanical ballet" that the hardtop performs during its reconfiguration.

TheCarConnection.com’s experience with the Eos, on a long drive in Portugal, brought out the best in the sunny four-seat convertible. With its eight electric motors latching and unlatching the roof at the push of a button, TheCarConnection.com’s car experts enjoyed hours of top-down driving—and some of it merely top-open, as the Eos’s roof has a setting that slides back one panel to mimic a sunroof. It’s advised to leave big luggage at home if you have more than one passenger: the cargo area is a manageable 6.6 cubic feet with the top stowed, larger than that in the Pontiac G6 and Volvo C70 hardtop convertibles, but it's still kind of small.

The 2008 Volkswagen Eos draws praise for its crash test ratings and provides above-average protection in case of a rollover.

Engineers at Volkswagen have done an excellent job of building a strong list of safety features into the Eos.

Volkswagen’s convertible performs very well in crash tests, earning the IIHS's highest possible rating in both side and front impact tests. The one area in which the IIHS deems improvement is needed is overall rear impact performance, where the Eos earned a rating of Marginal.

Cars.com notes safety features that come standard on the 2008 Volkswagen Eos include "the active roll bar, an electronic stability system and side head-thorax airbags," which take the place of typical side curtain airbags. To assist drivers with parking lot mobility and safety, upper-end versions of the Eos Volkswagen are fitted with a reverse warning system that alerts drivers if they are about to strike an object when backing up.

One of the biggest causes for concern in a convertible is the danger of a rollover and what safety features are included in case one should occur. Occupants of the 2008 Volkswagen Eos will find themselves protected by what Forbes Autos describes as a "pop-up head protection system" that automatically deploys when the car senses a rollover is imminent.

Used Volkswagen Eos for sale near

The 2008 Volkswagen Eos has an extensive list of standard and optional features.

Like many of the company’s cars, the 2008 Volkswagen Eos comes loaded with more features than you would find on its chief rivals, and it offers a decent list of optional equipment.

The most widely recognized feature on the 2008 Volkswagen Eos is unquestionably its retractable hardtop, which Popular Mechanics describes as "a marvel of metallic origami." Also included in that folding top is a sunroof function, wherein one panel retracts, leaving the rest of the hardtop raised. It’s a welcome feature for those sunny days when it's a bit too cold to take the top down. Kelley Blue Book points out the “cooled glove box,” which helps protect valuables like phones, PDAs, and chocolate from the sun on warm days.

The interior of the 2008 Volkswagen Eos offers occupants many sought-after features, such as heated front seats in the top-level trims and leather upholstery standard on the V-6 version. Forbes Autos also mentions that "options include a premium sound system, DVD navigation...Park Distance Control proximity warnings, and adaptive headlamps." Those headlamps also serve as a great safety feature at night on twisting roads, as they swivel in the direction of a turn to provide additional illumination where you need it most.

Be the first one to write a review on 2008 Volkswagen Eos
Rate and Review your car for The Car Connection! Tell us your own ratings for a vehicle you own. Rate your car on Performance, Safety, Features and more.
Write a Review
USED PRICE RANGE
$7,299 - $19,997
Browse Used Listings
in your area
8.2
Overall
Expert Rating
Rating breakdown on a scale of 1 to 10?
Compare the 2008 Volkswagen Eos against the competition
Looking for a different year of the Volkswagen Eos?
Read reviews & get prices
The Car Connection Daily Headlines