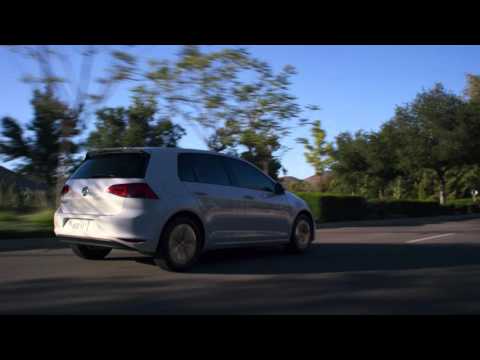 If you buy the lower-priced SE trim level of the 2016 Volkswagen e-Golf, we strongly recommend the optional 7.2-kW onboard charger and DC fast-charging capability, which give the car far more flexibility for unexpected situations.

The 2016 Volkswagen e-Golf is a competent electric car, but its specs are less competitive than before.

The 2016 Volkswagen e-Golf is VW's first all-electric car to be sold in North America—and you have to look twice to realize that it's operated by battery and electric motor, rather than using a gasoline or diesel engine. It's all but indistinguishable from any other seventh-generation Golf, and that decisively separates it from the Nissan Leaf, by far the highest volume electric car ever.

The e-Golf competes directly against the Leaf—at least in those markets where both cars are sold. Other all-electric five-door compact hatchbacks include the Ford Focus Electric, the BMW i3, and the Mercedes-Benz B-Class Electric Drive. Until this year, the e-Golf pretty much duplicated the technical specifications of the Leaf. But with the 2016 Leaf now available with 107 miles of range—up from 84 miles last year—the e-Golf's 83 miles is suddenly less competitive.

Volkswagen designed its latest Golf hatchback for an electric powertrain from the start, and the integration is seamless. It's almost possible that a driver not attuned to such things wouldn't notice that an e-Golf had no engine—except, of course, that it's smoother, quieter, and somewhat heavier on the road than its gasoline and diesel counterparts.

The 2016 e-Golf's design, both in exterior styling and the cabin decor is—well, it's a Golf. It is a conservatively styled, crisp-edged five-door hatchback that is clearly a descendant of the first Golf/Rabbit that hit U.S. shores four decades ago. The inside is sensible, straightforward, and virtually identical to any other Golf—and this generation now offers an in-dash touchscreen display for the first time.

Its 24.2-kwh lithium-ion battery pack powers an 85-kw (114-horsepower) electric motor driving the front wheels. Like the Leaf, VW does not actively heat or cool its pack; it sheds heat only by radiating it into the surrounding air.

The EPA rates the car at 83 miles of range and 116 MPGe, a measure of the distance an electric car can travel on the amount of energy contained in 1 gallon of gasoline. One additional electric-car specification: All e-Golfs can charge at up to 7.2 kw, meaning they'll finish recharging a little quicker than those with 6.6-kw chargers.

VW also offers DC quick-charging, which can recharge a battery to about 80 percent of capacity in about 30 minutes. But the e-Golf uses the much less prevalent Combined Charging System (CCS) standard—so e-Golf drivers are advised to get familiar with mobile-phone apps such as PlugShare to find out exactly where they can fast-charge. As of this year, it's largely limited to California, Oregon, Washington, Texas, and some Northeastern states.

Behind the wheel, the e-Golf offers the same roadholding and handling as the four-cylinder Golf models, though the suspension has been retuned for the added weight of the battery pack. But with that weight largely at the car's lowest point, the e-Golf corners flat and feels very stable under any circumstance.

VW's electric Golf has comfortable front seats, and more rear-compartment space for passengers than before. Its cargo volume is 17 cubic feet, decent for a compact hatchback (but notably lower than the 24 cubic feet of the Leaf). Build quality in the models we drove was good, and the e-Golf is the only Golf version sold in North America that's still built in Germany, rather than in the expanded Mexican assembly plant that has long built Jetta sedans.

Neither the NHTSA nor the IIHS has separately rated the e-Golf. The IIHS deems the regular Golf a Top Safety Pick+ for 2016, with its highest rating of "Good" on every test and all the requisite electronic safety systems standard or optional. Federal officials have given the Golf five stars overall in crash safety, including a mix for four- and five-star ratings on individual crash tests.

For 2016, the VW e-Golf is offered in two trim levels. Last year's introductory Limited Edition (LE) has been replaced as the base model by a new SE, starting at just under $30,000—exactly in line with the base Nissan Leaf S. The more luxurious SEL Premium model at the top of the range adds about $6,500 to that price.

The base e-Golf SE comes with only a 3.6-kw onboard charger, and dispenses with the DC fast-charging altogether. VW offers both of those capabilities as an extra-cost option on the SE, and they're standard on the SEL. For 2016, both trim levels get Volkswagen's new MIB II infotainment system, although the SE makes do with a 6.5-inch touchscreen, rather than the SEL Premium's 8.0-inch screen.

A new Driver Assistance package, including forward-collision warning, automated emergency braking, and park assist features, is available only on the SEL Premium.

At the start of the 2016 model year, the Volkswagen e-Golf was available only in 10 Northeast and West Coast states. VW has said it plans to expand distribution in future.

1 Review
5 star
100%
4 star
3 star
2 star
1 star
Rate and Review your car for The Car Connection! Tell us your own ratings for a vehicle you own. Rate your car on Performance, Safety, Features and more.
Write a Review
2016 Volkswagen e-Golf 4-Door HB SEL Premium