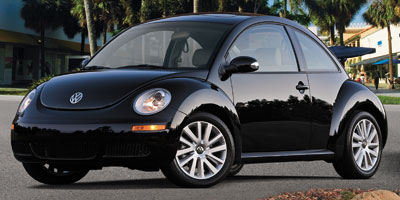 Want a diesel on a hatchback? Fortunately, the economical TDI engine will be back next year in a redesigned Golf.

People flock to the 2009 Volkswagen New Beetle for its looks—but performance, safety, and interior space are not its best attributes.

To bring you this conclusive review of the 2009 Volkswagen New Beetle, experts have combed the Web looking for insight and opinions. And here in this Bottom Line, the editors of TheCarConnection.com present their own driving impressions and advice for shoppers.

The 2009 Volkswagen New Beetle coupe and convertible are based on a previous generation of the VW Golf/Rabbit. The Beetle had its last update in 2006, but for the past decade, the Beetle has remained largely the same. It's starting to show its age—despite the fact that its design continues to draw fans.

A 2.5-liter inline five-cylinder is the only engine available on the 2009 Volkswagen New Beetle these days. Long gone are the more exciting turbo and turbo-diesel four-cylinder engines that were both faster and more fuel-efficient. The old-tech five is rated at 150 horsepower and works through either a five-speed manual or a six-speed automatic transmission. It pushes the New Beetle with a minimum of enthusiasm, yet gets only 20 mpg city, 29 highway with the automatic transmission in the coupe, and 20/28 mpg with the manual transmission in the coupe and the automatic in the convertible.

Handling is pretty dull in the 2009 New Beetle, and the engine is somewhat disappointing, but ride quality is a plus; the New Beetle soaks up larger bumps without wallowing.

On the inside, the 2009 New Beetle presents some problems in terms of available space. The dash slopes far away from the driver, and the roofline cuts into headroom in the cramped backseats, as well as into trunk room (the New Beetle's engine is up front, against Beetle tradition). In short, the rounded shape makes the 2009 Volkswagen New Beetle look larger from the outside than it is inside.

More advanced features such as a navigation system and Bluetooth are unavailable on the 2009 New Beetle. Front floor mats are no longer standard, while fog lights, leather seating, and rain-sensing wipers are off the equipment list entirely. A Cold Weather Package, which includes heated front seats and heated windshield washer nozzles, is standard for 2009.

The styling of the 2009 Volkswagen New Beetle is what it is—either outdated or timeless, depending on your perspective.

Reviewers run hot and cold on the 2009 Volkswagen New Beetle's styling, and impressions vary widely. You either love it or are just plain tired of it; there doesn't seem to be much middle ground.

The rounded, insect-like shape that endeared the original Volkswagen Beetle to a generation of Americans is alive and well in the 2009 Volkswagen New Beetle, which is available as a two-door hatchback or a two-door convertible. A 2006 redesign cleaned things up a bit, but the essentials remain the same. Cars.com gets it right in saying that "nothing else on the road looks like the modern-day Beetle." They add it's "cute and appealing." Kelley Blue Book contends the 2009 Volkswagen New Beetle "remains a popular choice among those seeking a less conventional mode of transportation." On the other side of the debate, Edmunds describes the car as "aged." Car and Driver reports the New Beetle has been "garnering adoration and unnerving otherwise confident men since 2003," and points out "its inherent and flamboyant femininity," while noting that even the convertible is "losing its head-turning ability." Edmunds notes "the New Beetle's oh-so-cool veneer has worn thin as it faces strong competition from more modern rivals." There's a change in tone when it comes to the convertible: "the Beetle convertible makes an especially classic and polished statement" with its "retro chic."

Inside the Volkswagen, 2009's New Beetle uses cuteness as a weapon. There's a dash-mounted bud vase, blue lighting, and round, bulbous dash shapes that are friendly in appearance. The dash is wide, deep, and flat, creating an odd separation for the driver. Kelley Blue Book reports that the instrument panel configuration "takes some getting used to as it spans the considerable distance between the windshield and the driver and front-seat passenger."

The 2009 Volkswagen New Beetle doesn't shine in terms of performance, though the convertible adds a measure of fun.

A 2.5-liter inline five-cylinder is the only engine available on the 2009 Volkswagen New Beetle. It's rated at 150 horsepower and works through either a five-speed manual or a six-speed automatic transmission. Car and Driver says "the VW returns an 8.8-second huff to 60 mph," not an impressive figure but light-years beyond the performance of the original Beetle. ConsumerGuide reports that the "slow-revving 5-cylinder engine needs full throttle for best takeoffs."

Transmission options include a five-speed manual or a six-speed automatic. Edmunds indicates that regardless of whether the vehicle is equipped with the manual or six-speed automatic, "acceleration is merely adequate." Some reviewers like the automatic because the extra speed makes a noticeable difference in the 2009 Volkswagen New Beetle. However, Cars.com observes, "The manual gearbox operates easily, and the clutch is light." Edmunds reports that "fuel economy is similarly lackluster for a compact." Gas mileage is good news for fans of the automatic Volkswagen; 2009's New Beetle gets 20/29 mpg with the automatic transmission in the coupe, and 20/28 mpg with the manual transmission in the coupe and the automatic in the convertible.

Hot handling isn't the 2009 New Beetle's mission on the planet, but it rides well. Cars.com points out that "the car also delivers a superior ride; the suspension absorbs plenty of road imperfections," and "steering feel and feedback are excellent." Edmunds says, "It isn't a spirited experience, but excels at what it was built for—cruising and being seen cruising in," and "the suspension is on the soft side of sporty." Car and Driver reports "this is not a corner bomber." Torque steer is an unanticipated issue, they warn, "when you poke the gas hard."

The 2009 Volkswagen New Beetle is tight in the backseat. Other than that, it's fairly comfortable.

Editors at TheCarConnection.com find that the 2009 Volkswagen New Beetle is pleasant in the front seat—but the rear seat is absolutely dismal for adults.

"The front seats are roomy," Edmunds reports of the 2009 Volkswagen New Beetle, "but the same can hardly be said of the back." The backseat situation is exacerbated when the front seats are moved back; "the sloping hatch creates a nearly unusable rear seat," says Kelley Blue Book.

Cars.com reports what most of us already know by looking at the New Beetle: "Unfortunately, this design also infringes on rear headroom, and backseat legroom is limited." They do note "the rear seatback folds down for additional storage space." At least "access to the back seat is easy," thanks to a nifty seat mechanism, Car and Driver observes.

Trunk space is expectedly tight in the 2009 Volkswagen New Beetle. This isn't a vehicle built for a road trip.

Build quality is good overall, and the convertible version of the 2009 Volkswagen New Beetle manages to avoid some of the shaking that plagues similar vehicles due to a heavily reinforced body.

The 2009 Volkswagen New Beetle offers a good range of safety features—but it's clearly not the safest vehicle in its class.

Editors at TheCarConnection.com find that there are plenty of safety features available on the 2009 Volkswagen New Beetle. Unfortunately, some crash-test scores are below par.

Cars.com reports that "daytime running lights are standard." Stability control is also standard on the Volkswagen 2009 New Beetle, along with anti-lock brakes and front airbags. There are also pop-up roll bars that, Consumer Reports notes, activate automatically if sensors detect an imminent tip.

Used Volkswagen Beetle for sale near

The 2009 Volkswagen New Beetle is so-so in the features department—but the convertible top is top-notch.

The 2009 Volkswagen New Beetle comes with more than a few useful features—especially if you spring for the upgraded SE trim.

One of the most attractive features on the Volkswagen 2009 New Beetle is, of course, its convertible version's ragtop. The convertible version keeps the signature roofline arc and excess of front headroom, as well as a shortage of rear headroom—but the key is that the three-layer fabric top lowers in 13 seconds. According to ConsumerGuide, "S convertibles have a manual-folding top; it's power-operated on the SE." The power-folding top gets high marks for being fast, quiet, and classy.

Edmunds reports that the 2009 Volkswagen New Beetle offers a "lengthy standard equipment list." Tire pressure monitors and a temporary spare tire have been added as standard equipment, and Sirius Satellite Radio is an option. Front floor mats, however, are no longer standard, while fog lights, leather seating, and rain-sensing wipers are off the equipment list entirely. More advanced features like a navigation system and Bluetooth are unavailable.

ForbesAutos explains that "VW has bundled its most popular items," so it may be hard to make a la carte purchases. For 2009, a formerly optional Cold Weather Package (with heated front seats and heated windshield washer nozzles) is now standard.

1 Review
5 star
4 star
100%
3 star
2 star
1 star
Rate and Review your car for The Car Connection! Tell us your own ratings for a vehicle you own. Rate your car on Performance, Safety, Features and more.
Write a Review
For 2009 Volkswagen Beetle