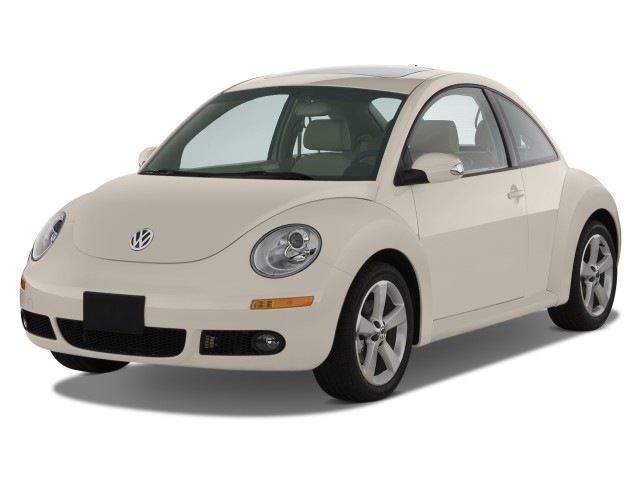 The 2008 Volkswagen New Beetle's price should be easily negotiated. Sales have slowed dramatically, and the lack of a truly sporting powertrain has cut into its appeal.

The 2008 Volkswagen New Beetle’s looks are its best features—interior room, performance and crash protection are not.

TheCarConnection.com's editors researched a wide range of road tests of the 2008 Volkswagen New Beetle to write this definitive review. TheCarConnection.com's resident experts also drove the Volkswagen New Beetle to help you decide which reviews to trust where opinions differ, to add more impressions and details, and to provide you with the best information.

While diesels and turbo fours have been offered in the past, a 2.5-liter in-line five-cylinder is the only engine available on the 2008 Volkswagen New Beetle these days. It's rated at 150 horsepower and works through either a five-speed manual or a six-speed automatic transmission. It pushes the New Beetle with a minimum of enthusiasm, but with decent efficiency; the New Beetle gets 20/29 mpg with the automatic transmission in the coupe, and 20/28 mpg with the manual transmission in the coupe and the automatic in the convertible. Handling is similarly dull.

The rounded shape makes the 2008 Volkswagen New Beetle look larger from the outside than it is inside. The dash slopes far away from the driver, and the roofline cuts into headroom in the cramped backseats, as well as into trunk room (the New Beetle's engine is up front, against Beetle tradition).

The convertible version adds heft but balances it with a sunnier disposition. With help from Karmann, which designed the top for the original Beetle convertible, the top in the Volkswagen New Beetle keeps the signature roofline arc and excess of front headroom, as well as a shortage of rear headroom. There's a noticeable decrease in rear cargo space (5 cubic feet in the convertible versus 12 cubic feet in the coupe). The three-layer fabric top lowers in 13 seconds, though.

Volkswagen has deleted some equipment from the New Beetle's spec sheet; front floor mats are no longer standard, while fog lights, leather seating, and rain-sensing wipers are off the equipment list entirely. Tire-pressure monitors and a temporary spare tire have been added as standard equipment, though, and Sirius Satellite Radio is an option. More advanced features such as a navigation system and Bluetooth are unavailable.

The 2008 Volkswagen New Beetle is trapped somewhere between “aged” and timeless.

The rounded, insect-like shape that endeared the original Volkswagen Beetle to a generation of Americans is alive and well in the 2008 Volkswagen New Beetle. Two years ago, the New Beetle got a subtle reskin that “has the Beetle's ovoid form looking a little more buffed. Fender and bumper lines are cleaner and wheel arches more sharply defined, while head and taillights are re-shaped,” notes Automedia.

The Volkswagen New Beetle is available as a two-door hatchback or a two-door convertible. Kelley Blue Book says the 2008 Volkswagen New Beetle "remains a popular choice among those seeking a less conventional mode of transportation." Cars.com gets it right in saying that "nothing else on the road looks like the modern-day Beetle." They add, it’s “cute and appealing.”

Car and Driver, though, says the New Beetle has been “garnering adoration and unnerving otherwise confident men since 2003,” and points out “its inherent and flamboyant femininity” while noting that even the convertible is “losing its head-turning ability.”

Edmunds describes the car as "aged," too. The New Beetle is based on the old VW Golf and was first rolled out in 1994 as a concept car, hitting the U.S. in 1998. Edmunds says, "the New Beetle's oh-so-cool veneer has worn thin as it faces strong competition from more modern rivals." There’s a change in tone when it comes to the convertible: "the Beetle convertible makes an especially classic and polished statement" with its “retro chic.”

Inside the Volkswagen, 2008’s New Beetle uses cuteness as a weapon. There’s a dash-mounted bud vase, blue lighting, and round, bulbous dash shapes that are friendly in appearance. “Inside, driver and front passenger are removed from the windshield by a vast expanse of a flat dash top,” Automedia says. The most recent upgrades to the interior include “a new single-bezel instrument cluster with chrome accents, and a redesigned center console with upgraded cup holders.” Kelley Blue Book reports that the instrument panel configuration "takes some getting used to as it spans the considerable distance between the windshield and the driver and front-seat passenger."

TheCarConnection.com has sampled many New Beetles from Volkswagen, 2008 through 1998 editions. Based on a previous generation of the Volkswagen Golf/Rabbit, the New Beetle coupe and convertible were updated in 2006 in a very subtle way. While the bubbly shape remains instantly recognizable--and the interior as well trimmed as ever--the New Beetle is showing its age, particularly now that other heritage cars like the Ford Mustang and MINI Cooper have undergone complete transformations.

The 2008 Volkswagen New Beetle is probably more fun to drive in its convertible form--just don't look for sporty acceleration here.

Reviewers from across the Web had good things to say about the 2008 Volkswagen New Beetle's handling, but less kind words for its engine.

While diesels and turbo fours have been offered in the past, a 2.5-liter in-line five-cylinder is the only engine available on the 2008 Volkswagen New Beetle these days. It's rated at 150 hp and works through either a five-speed manual or a six-speed automatic transmission. According to Automobile, "it runs out of huff well before it reaches its 6000 rpm limit"--unsurprising since it weighs about 3,000 pounds. Car and Driver says, “the VW returns an 8.8-second huff to 60 mph,” not an impressive figure but light-years beyond the performance of the original Beetle. ConsumerGuide reports that the "slow-revving 5-cylinder engine needs full throttle for best takeoffs."

The 2008 Volkswagen New Beetle is offered with a five-speed manual or a six-speed automatic. In this case, the automatic “may be a better choice than the manual gearbox,” Automedia reports. “Spreading the power over six cogs results in smoother, less stressed performance.” However, Cars.com says, “The manual gearbox operates easily, and the clutch is light.” Edmunds says that regardless of whether the vehicle is equipped with the manual or six-speed automatic, "acceleration is merely adequate," while "fuel economy is similarly lackluster for a compact." Gas mileage is good news for fans of the automatic Volkswagen; 2008’s New Beetle gets 20/29 mpg with the automatic transmission in the coupe, and 20/28 mpg with the manual transmission in the coupe and the automatic in the convertible.

Hot handling isn’t the New Beetle’s mission on the planet, but it rides well. Car and Driver says, “this is not a corner bomber.” Torque steer is an unanticipated issue, they say, “when you poke the gas hard.” Edmunds says, “It isn't a spirited experience, but excels at what it was built for--cruising and being seen cruising in,” and “the suspension is on the soft side of sporty.” Cars.com points out that “the car also delivers a superior ride; the suspension absorbs plenty of road imperfections,” and “steering feel and feedback are excellent.”

The 2008 Volkswagen New Beetle offers a reasonably comfortable ride as long as you don't expect too much. Backseat room is a major issue.

The 2008 Volkswagen New Beetle has good room and comfort for front passengers, but backseat riders have cramped quarters.

Roominess is another matter altogether, and in this respect, the 2008 Volkswagen New Beetle is all too similar to its ancestor. “The front seats are roomy,” Edmunds writes, “but the same can hardly be said of the back.” Cars.com tells us what most of us already know by looking at it: “Unfortunately, this design also infringes on rear headroom, and backseat legroom is limited.” They do note “the rear seatback folds down for additional storage space.” The backseat situation is exacerbated when the front seats are moved back: "the sloping hatch creates a nearly unusable rear seat," says Kelley Blue Book. At least “access to the back seat is easy,” thanks to a nifty set mechanism, Car and Driver observes.

Automobile reports little of the shaking to which convertibles are prone on the topless New Beetle. This is largely thanks to "heavily reinforced A- and B-pillars, floors, doors, steering column, and rear cross-members -- joined for rollover safety's sake by a pair of automatically deployed roll bars hidden in the rear seats' head rests." Backseat width and trunk space are even smaller in the ragtop, they add.

Although the safety equipment is more than adequate, drivers should be aware of some of the 2008 Volkswagen New Beetle's shortcomings.

There's a full range of standard safety features available for the 2008 Volkswagen New Beetle, but TheCarConnection.com research shows that performance in some crash tests is below average.

The Insurance Institute for Highway Safety (IIHS) gave the New Beetle a top score of "good" for frontal-offset crash protection. However, it did badly in side impact tests, earning a rating of "poor."

Stability control is standard on the Volkswagen 2008 New Beetle, along with anti-lock brakes and front airbags. There are also pop-up roll bars that, Consumer Reports notes, are activated automatically if sensors detect an imminent tip. This is no bad thing because the "bulky body shape can induce some crosswind wander at highway speeds." Cars.com reports that "daytime running lights are standard."

Used Volkswagen Beetle for sale near

The 2008 Volkswagen New Beetle doesn’t offer the most advanced tech options, but the convertible top is its finest hour.

The 2008 Volkswagen New Beetle has some useful features--and even more if you get the SE trim.

One of the most attractive features on the Volkswagen 2008 New Beetle is, of course, its convertible version's ragtop. The convertible version adds heft but balances it with a sunnier disposition. With help from Karmann, which designed the top for the original Beetle convertible, the top in the Volkswagen New Beetle keeps the signature roofline arc and excess of front headroom, as well as a shortage of rear headroom. There's a noticeable decrease in rear cargo space (5 cubic feet in the convertible versus 12 cubic feet in the coupe). The three-layer fabric top lowers in 13 seconds, though.

According to ConsumerGuide, "S convertibles have a manual-folding top; it's power-operated on the SE," and Automobile says that "lowering the fully lined, quiet roof was never so easy...just twist a handle and hit a button (with the optional electrohydraulic fitment), and it lowers to lie flat above the deck lid, though not so obtrusively as its forebears."

Some equipment has been deleted from the Volkswagen 2008 New Beetle's spec sheet; front floor mats are no longer standard, while fog lights, leather seating, and rain-sensing wipers are off the equipment list entirely. Tire pressure monitors and a temporary spare tire have been added as standard equipment, though, and Sirius Satellite Radio is an option. More advanced features like a navigation system and Bluetooth are unavailable.

Those living in snow country can get "the Cold Weather package," according to Cars.com. This features heated front seats and heated windshield washer nozzles.

Be the first one to write a review on 2008 Volkswagen Beetle
Rate and Review your car for The Car Connection! Tell us your own ratings for a vehicle you own. Rate your car on Performance, Safety, Features and more.
Write a Review
Browse Used Listings
in your area
7.0
Overall
Expert Rating
Rating breakdown on a scale of 1 to 10?
Compare the 2008 Volkswagen Beetle against the competition
Compare All Cars
Looking for a different year of the Volkswagen Beetle?
Read reviews & get prices
Related Used Listings
Browse used listings in your area