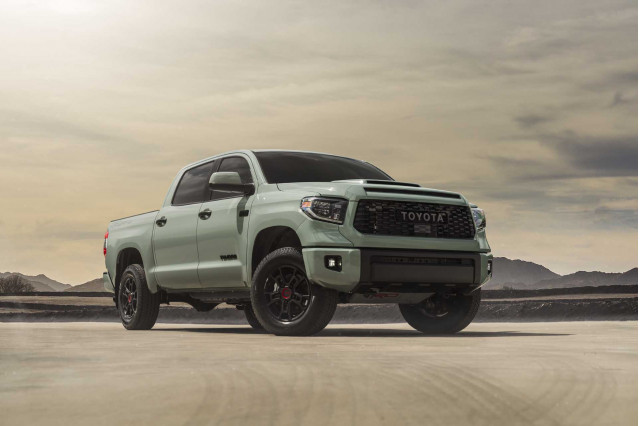 We’d recommend the modest Tundra SR5 for value, but TRD Pro trucks have a good ride and off-road chops.

The 2021 Toyota Tundra leans hard into its brand name and its reputation for durability.

The 2021 Toyota Tundra works hard to pull its weight in the full-size pickup class, but despite a muscular V-8 engine it falls behind the Ram 1500 and Ford F-150 in our rankings. It’s light on luxury, lower on towing and hauling ratings, and in gas mileage too.

We’d still buy one if we put durability and resale value at the top of the rankings, but nobody does full-size trucks better than Detroit.

For 2021, the few changes to the Tundra include new Nightshade and Trail Special Editions, which are mostly visual changes. The major versions—SR, SR5, Limited, TRD Pro, Platinum, and 1794 Edition trims—carry over with the same basic shapes that it’s worn since we had a President-Elect Obama. It’s gawkward (let’s make that word happen) and bulbous, and inside, the Tundra SR looks a little too thrifty.

Toyota pours its efforts instead into its throbby 381-horsepower 5.7-liter V-8, which passes out smooth, Lexus-style acceleration like flyers in Times Square. Its 6-speed automatic has the right gears for moderate speeds, but it needs a couple more gears at least to do better than its very low 15-mpg EPA combined peak. The Tundra can pull up to 10,200 pounds and can strap on 1,730 pounds of weight into its bed; it’s stuck with a part-time four-wheel-drive system, though, and its TRD Pro off-road model’s fine but it’s no Raptor or TRX.

The Tundra’s standard bench seats make six-passenger seating possible, but we’d upgrade without a second thought to power front seats and a wide center console. That way the Tundra can seat five, though the three in back get a very upright back rest that’s not so restful. Toyota sells the Tundra in three different bed lengths, but the nifty touches like in-tailgate steps, bed lighting, tie-downs, and in-bed storage found in rivals are absent here.

All Tundras get automatic emergency braking, but the IIHS’ low crash-test ratings are a concern. Tundras come with a basic 7.0-inch infotainment screen with Apple CarPlay and Android Auto compatibility, but more expensive Tundras don’t have the luxury options of rivals. The warranty’s average, too, though Tundra resale values regularly set a torrid truck pace. Stick with the value-minded Tundra SR5 and drive it forever; spendy Limited and 1794 Edition trucks look nicer, but don’t drive any better.

The Tundra’s due for a makeover.

Toyota penned today’s Tundra back in the mid-2000s, set it loose for the 2008 model year, and hasn’t done much with it since then. We take a point each for the aged interior and exterior, and give it a 3 for style.

Toyota has all the pieces to make for an attractive truck: big wheels, a big grille, big chrome bumpers, a big name stamped into the tailgate. It comes together in an unconvincing way, bulging where it oughtn’t be and gangly where it shouldn’t be. The TRD Pro pulls off the mixed bag of cues best, with its body-color bumper trim and grille, and even it’s far from the convincing toughness of a Ram 1500.

The Tundra’s cabin has it just as rough. The wide dash is almost featureless, with a big swath of metallic plastic trim that has the warmth and lightness of a Sony TV from a decade ago—part Tron, part Trinitron. The best version’s the swanky 1794 Edition, named for the ranch where Toyota built the plant that builds the Tundra, outside San Antonio. It’s shod in saddle brown leather and warmer tones, but the Laramie Longhorn and King Ranch rivals set benchmarks the Tundra can’t meet.

We’d listen to the Tundra’s NASCAR-style V-8 all day.

Toyota taps a raucous V-8 engine to power the Tundra, and even though it likely doesn’t share a single bolt with its NASCAR engines, it sure sounds like one. Behind its buttery power delivery, its rebellious growl, and its slick-shifting 6-speed automatic, it’s the big reason the Tundra gets a 6 for performance—a point for powertrain and one for towing capacity, minus one for its trucky handling.

The 381-hp 5.7-liter V-8 soldiers on in the Tundra, which lost its smaller 4.6-liter V-8 engine last year. Toyota ships the V-8’s power to either the rear or all four wheels through a 6-speed automatic, which loses out in cog count to Ford’s 10-speed and GM’s 10-speed. Shift quality is good, but fuel economy is lackluster at best, in part because the gearbox has nowhere to go on highway cruises.

With 401 pound-feet of torque, the Tundra can tow up to 10,200 pounds behind it, and can carry up to 1,730 pounds of stuff in the bed. It’s capable in muck and mud too, though its four-wheel-drive transfer case doesn’t have a full-time mode.

Toyota fits the Tundra with an independent front end and a solid rear axle in back, and for the most part, the ride bounds softly enough to be daily-drivable. To make the most of it, Toyota ships a TRD Pro edition with Fox shocks and knobby off-road tires. Tundras have hefty steering—and a massive turning radius that turns parking lots and city driving into a chore, a trait it has in common with just about every other full-size truck on the road today.

It’s as big as a city block inside (well, almost), but the Tundra’s stock interior is pretty dour.

The Tundra has enough room between its doors to fit five or even six people with ease, and front-seat passengers get treated very well—as does the lumber out back. But the back seat needs to relax, and the interior needs a rework. It’s a 7 for comfort and utility.

Toyota sells the Tundra in extended- and crew-cab versions. All have a front bench seat with a fold-down armrest standard, but we’d spend up for the power front seats, which get captain’s-chair cushioning, heating, cooling, and leather on the most expensive models.

In back, there’s less comfort than in rival full-size trucks. Leg room is shy in extended-cab Tundras; crew cabs have excellent leg room and wide doors, but the rear seat backrest stands upright at attention, and wouldn’t be our chosen place for a long journey.

Toyota sells the Tundra with a choice of three bed lengths, and the shorter ones are more popular. The Tundra doesn’t have the multitudes of bed options found on Ram 1500s or F-150s or Silverados—things like power outlets, in-bed lighting and storage, and tie-downs.

The Tundra’s cabin is the biggest letdown. It shows its age in hard plastics on SR models, and even the 1794 Edition’s swanky leather can’t rival the “Dallas/Dynasty” stuff you’d find in a Ram Laramie Longhorn.

The IIHS has something to say about the Tundra; it’s not good.

Toyota’s Tundra is one of the rare pickup trucks to come with standard automatic emergency braking—but its crash-test scores would still give us pause.

Also fitted with standard automatic high-beam headlights and adaptive cruise control, the Tundra earns a 4 here because the IIHS found its front-impact protection to be “Marginal” and even “Poor” for driver- and front-passenger protection. It also called its headlights “Marginal.”

The NHTSA gives the Tundra four stars overall, but a three-star rating crops up in its rollover rating.

The Tundra skirts the bare minimum requirements for its price.

Toyota outfits the Tundra with smartphone connectivity, power features, and Bluetooth in base SR versions, and its infotainment system works well enough. It lacks a long warranty and doesn’t offer much in the way of value or options, so it’s a 7 here.

We’d opt for the slightly better equipped Tundra SR5 which gets a few USB ports, an available crew-cab body style, and an 8.0-inch touchscreen. With four-wheel drive, it costs about $42,000.

The most expensive Tundras cost more than $50,000 and get JBL premium audio, heated and cooled seats, a sunroof, and leather upholstery. They’re tens of thousands less than top-flight F-150s and Ram 1500s.

The Tundra distinguishes itself in gas mileage, in the wrong way.

Few new vehicles earn EPA ratings as low as the Toyota Tundra. We give it a 2 here, for official fuel-economy scores of 13 mpg city, 18 highway, 15 combined when configured with rear-wheel drive. The four-wheel-drive Tundra’s slightly worse, at  13/17/14 mpg. Both use regular unleaded gas.

Be the first one to write a review on 2021 Toyota Tundra
Rate and Review your car for The Car Connection! Tell us your own ratings for a vehicle you own. Rate your car on Performance, Safety, Features and more.
Write a Review
USED PRICE RANGE
$34,437 - $69,500
Browse Used Listings
in your area
4.8
Overall
Expert Rating
Rating breakdown on a scale of 1 to 10?
Compare the 2021 Toyota Tundra against the competition
Compare All Cars
Looking for a different year of the Toyota Tundra?
Read reviews & get prices
Related Used Listings
Browse used listings in your area
The Car Connection Daily Headlines