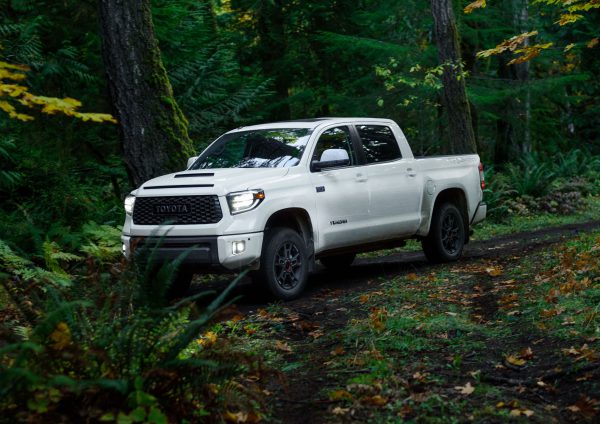 Though the Tundra TRD Pro offers the best ride of the lineup, spending less amps up the Tundra’s value. Go for a modestly optioned Tundra SR5.

The 2020 Toyota Tundra trades on its durable reputation rather than its appealing design.

The 2020 Toyota Tundra is a hard-working truck that’s light on luxury and high-tech features. Toyota’s full-size pickup has its assets, but its basic design dates back more than a decade and it shows. We rate the 2020 Tundra at 4.8 out of 10. (Read more about how we rate cars.)

This year, the lineup is pared back to just one engine standard on the SR, SR5, Limited, TRD Pro, Platinum, and 1794 Edition trims. At least the V-8 is a good (albeit very thirsty) one: a 381-horsepower 5.7-liter V-8 that delivers Lexus-like smooth acceleration accompanied by a race car-like growl when called into action. The 6-speed automatic transmission works well but doesn’t help fuel economy compared to rivals with more gears. Rear-wheel drive is standard, while a part-time 4WD system is optional.

The Tundra rides well and has reasonably responsive steering. Off-road ability is above average on the TRD Pro thanks to a boulder-swallowing suspension with Fox shocks. The Tundra isn’t rated to tow as much as some competitors, but its 10,000-pound-plus capability is good enough for most uses and the V-8 makes a willing hauling partner. An unusually large turning radius is a letdown, however.

The Tundra’s trucky looks outside are paired with a spacious but dated interior with low-buck plastics even on costly versions. The Tundra's base 7.0-inch infotainment screen can wash out in bright light, we've found. Apple CarPlay and Android Auto compatibility was added for 2020, but the Tundra's features are on the sparse side compared to myriad options on domestic automakers' trucks. The Tundra costs about $35,000 to start, and its prices are reasonable compared to some rivals. The Tundra also has a decent resale value.

Among the truck’s standard features are automatic emergency braking and adaptive cruise control. Weak crash-test scores from both federal and independent testers reveal this design’s age.

The Tundra remains worth a look for some shoppers, but Detroit’s big trucks remind us that nobody does heavy hauling better than Motown.

The 2020 Toyota Tundra is not a stylish pickup truck.

Brash styling usually works on pickup trucks, but that’s not the case when it comes to the 2020 Toyota Tundra. This truck’s basic lines date back more than a decade, and it wasn’t especially attractive then.

Inside and out, the Tundra rates below average. We score the 2020 Tundra at 3 out of 10 for its styling.

The pieces are all there: a massive grille, available chrome bumpers, big wheels, and a tailgate stamped with the truck’s name. It’s the execution that’s just not right. Tundra TRD Pros look the best with their body-color grille and bumper trim, though even they’re not subtle.

Where the Tundra suffers most is inside. Its wide dash stretches from one side of the Great Plains to the other, and it’s just about as featureless. A broad expanse of silver-painted trim neither looks nor feels good, and it dates this truck to that brief moment in time when TVs and other electronics were painted silver. That was so long ago that those Sony Trinitrons are old enough to vote now.

Tundra is at its best in tony 1794 Edition trim, which derives its name from the year the ranch on which the automaker’s assembly plant outside San Antonio was established. The saddle brown leather upholstery is soft and attractive, though it’s no match for the Cowboy Cadillac elegance of the Ram Laramie Longhorn and Ford F-150 King Ranch that better celebrate the Lone Star State.

With its NASCAR-grade V-8, the 2020 Toyota Tundra delivers ample acceleration.

The engines Toyota campaigns in NASCAR probably don’t share a single screw or bolt with the 5.7-liter V-8 standard on the 2020 Toyota Tundra, but they could have fooled us. This old-school V-8 delivers buttery smooth performance around town and opens up with a rebellious growl when called into action. It’s our favorite part about the 2020 Tundra, and it pairs with the good ride quality to help this big truck earn 6 out of 10 points.

Last year’s 4.6-liter V-8 is discontinued, which leaves the 381-hp 5.7-liter V-8 as the Tundra’s only engine. Power goes to the rear or, optionally, all four wheels through a 6-speed automatic transmission making 401 pound-feet of torque. The transmission is down at least a couple of cogs compared to the truck’s rivals, which also explains the lackluster fuel economy, though the 6-speed does a good job keeping the engine in its power band for healthy acceleration. The optional transfer case lacks a convenient full-time mode for use on any sort of pavement, meaning drivers need to remember to shift into or out of four-wheel drive in inclement weather.

The independent front and coil-sprung solid rear axle provide a soft ride in most configurations. TRD Pros make use of Fox shocks that swallow big bumps even better, though their off-road tires diminish grip. The truck’s steering has good heft, if little feel. A massive turning radius means city driving and parking lots can be a chore, but that’s something we could say about any full-size pickup truck.

Properly equipped, the Tundra can confidently tow upward of 10,200 pounds and haul up to 1,730 pounds in the bed.

The 2020 Toyota Tundra is as spacious as its city block-long cabin ought to be, but cheap materials hardly improve its ambience.

Drivers and passengers are treated to ample stretch-out space in the 2020 Toyota Tundra, but the ambience is budget-grade even on mega-buck versions.

We rate the 2020 Tundra at 7 out of 10 for comfort, awarding points for front and rear space as well as its cargo utility. A point is deducted for its dour materials.

Rear-seat riders in extended-cab trucks don’t have a lot of leg room. The more popular crew cabs are exactly the opposite, with exceptionally good leg room albeit an upright, featureless back rest. The Tundra is easy to climb into thanks to wide door openings and available running boards.

Depending on cab configuration, the Tundra is available in three bed lengths. Shorter beds are more popular, and Toyota offers a bedliner but limited availability features such as tie-downs, power outlets, lights, and bed storage.

Where the Tundra misses expectations is in its interior materials. Hard plastics that dominate the cabin don’t impress on base SR trims, let alone far costlier trucks with hefty price tags.

The 2020 Toyota Tundra has a mixed crash-test record, though we applaud its standard collision-avoidance tech.

Pickup trucks are some of the last vehicles to offer advanced safety gear, something that seems at odds with their sky-high price tags. T

he 2020 Toyota Tundra stands out even in this crowded field for its standard adaptive cruise control, automatic emergency braking, lane-departure warnings, and automatic high-beam lights. Those features are good for a point, which we deduct for subpar crash-test scores. We wind up at a 4 out of 10 for the 2020 Tundra’s safety.

The IIHS is highly critical of the Tundra, scoring the truck “Marginal” and “Poor” in the driver- and passenger-side small-overlap tests designed to replicate impact with an oncoming car or a utility pole. Additionally, the IIHS rates the truck’s headlights as “Marginal.”

The NHTSA scores the truck four out of five stars overall, including three stars in the calculated rollover assessment.

The 2020 Toyota Tundra is behind the times when it comes to tech features.

The 2020 Toyota Tundra finally gets advanced smartphone connectivity standard, yet it's still light on features. We wind up at a 6 out of 10 for the 2020 Tundra, mostly because the base model is a decent value.

Base SR trucks are a step above fleet trucks, but not by much. They include a 7.0-inch touchscreen, Apple CarPlay and Android Auto compatibility, one USB charge port, active safety features, Bluetooth connectivity, and basic power equipment. That covers the basics, but it's not grand.

The best buy here is a Tundra SR5 that includes an 8.0-inch touchscreen, one more USB charger, and can be had in the more popular crew-cab form and with more available options. A decent Tundra SR5 with four-wheel drive (about $3,000 more) stickers for around $41,000, which isn’t too bad especially given the truck’s good resale value.

The range climbs to around $53,000 for the Platinum and 1794 Edition trucks, which are decked out in soft leather, JBL speakers, heated and cooled seats, moonroofs, and more.

The 2020 Toyota Tundra is among the thirstiest new vehicles available.

If collecting credit card points is one of your hobbies, the 2020 Toyota Tundra might be the truck for you. It’s staggeringly—almost offensively—thirsty. We rate the truck at just 2 out of 10 points for its fuel efficiency.

Rivals offer diesel engines and mild-hybrid tech, none of which is in the Tundra’s portfolio.

Instead, there’s just one engine, and it’s as inefficient as it is powerful. With two-wheel drive, the Tundra is rated at a mere 13 mpg city, 18 highway, 15 combined. Four-wheel-drive trucks are even worse at 13/17/14 mpg.

The silver lining is that the Tundra uses regular fuel.

Be the first one to write a review on 2020 Toyota Tundra
Rate and Review your car for The Car Connection! Tell us your own ratings for a vehicle you own. Rate your car on Performance, Safety, Features and more.
Write a Review
USED PRICE RANGE
$33,394 - $63,000
Browse Used Listings
in your area

4.7
Overall
Expert Rating
Rating breakdown on a scale of 1 to 10?
Compare the 2020 Toyota Tundra against the competition
Compare All Cars
Looking for a different year of the Toyota Tundra?
Read reviews & get prices
Related Used Listings
Browse used listings in your area
The Car Connection Daily Headlines