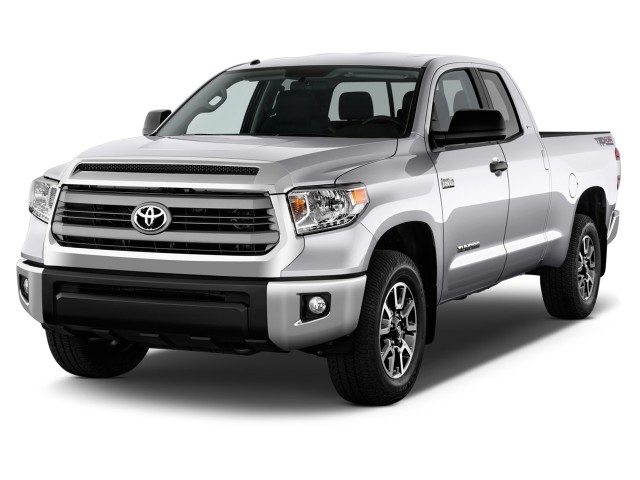 The Platinum and 1794 Edition trim lines make the Tundra's cabin much more luxurious, but at a price--consider the Limited if you're after leather, but don't need all the other bells and whistles.

A fresh new look and an upgraded interior with new technology make the 2014 Toyota Tundra an intriguing truck, but lackluster powertrains keep it from shining.

The Toyota Tundra hasn’t managed to become one of the major players in the full-size pickup market, but it nonetheless remains a favorite of some truck buyers as well as Toyota loyalists. Despite being a small piece of the overall truck scene, the Tundra’s updates for 2014 add new features and more luxury to a capable truck, both on and off road.

The 2014 Toyota Tundra brings new looks and new features to the venerable pickup model line, though overall proportions, engines, and most of the key details remain unchanged. Adoption of the SAE J2807 rating means the Tundra is the only full-size pickup with capabilities meeting an industry agreed-upon standard, rather than solely internal towing capacity ratings.

For 2014, the new exterior and interior look are joined by a handful of technology and equipment updates, and no changes to the engines or transmissions offered. That leaves the base model with the 270-horsepower, 278-pound-foot 4.0-liter V-6 engine; the mid-range 4.6-liter V-8 rated at 310 horsepower and 327 pound-feet of torque; and the top-line 5.7-liter V-8, good for 381 horsepower and 401 pound-feet of torque. The V-6 is paired with a five-speed automatic, while the V-8s get a six-speed auto.

Unloaded on city streets, both V-8 models feel about the same--fairly quick with decent low-end acceleration, but they run out of steam as the speed rises. Laden with an 8,000-plus-pound trailer, the 5.7-liter V-8 is the one to choose; even then, it's challenged to reach freeway speeds in the length of a typical on-ramp, despite a max tow rating of up to 10,400 pounds--and close to 10,000 pounds on most models. In our experience, the Tundra, despite its J2807 rating and big spec-sheet figures, doesn't feel as confident or as quick as the GM and Ford alternatives when towing larger loads, particularly when the larger V-8s from each brand are in the picture.

Ride quality is fairly good across all Tundra models, though pavement seams and surface bumps translate into larger-than-normal impacts in the cabin. The plush seats do a good job of keeping things comfortable, and the Tundra does handle well for a pickup driving around town, but it's not the smoothest-riding truck in the segment.

Much-needed upgrades to the interior and equipment levels come for the 2014 Tundra, including a new luxurious 1794 Edition. Trim levels include SR, SR5, Limited, and Platinum, each step up the ladder bringing with it more creature comforts and technology. Materials have been upgraded across the board, though it's less readily noticeable in the lower-tier SR and SR5 models. Double cab (standard on SR5) and CrewMax models both offer four-door access and seating for five, but the CrewMax is the definite choice if you want to seat six-footers in the second row--and fortunately is standard on all Platinum and 1794 Edition Tundras. A regular cab is also available, but only on SR models.

The entry-level SR model is the work truck spec, and it comes standard with the V-6 engine (the V-8s are available as an upgrade); a choice of regular or double cab (no crew cab option); and a long or standard bet. Standard equipment includes daytime running lights, 18-inch steel wheels, Entune Audio, 60/40 split-folding rear bench seat, power windows, and all of the standard safety equipment. Step up to the SR5, and you add fog lights, variable intermittent windshield wipers, Entune Audio Plus, and optional 18-inch alloy wheels.

Gas mileage isn't a strong suit of the Tundra, earning below-average ratings across the engine range. Toyota says real-world gas mileage is on par with GM and Ford trucks, despite the EPA ratings. In our time behind the wheel of the Tundra in both 4.6-liter and 5.7-liter V-8 forms, the vehicle-reported mileage rarely rose above 15 mpg in unloaded, rural driving. Our real-world experience has seen better gas mileage in other full-size trucks with similar capabilities.

The 2014 Tundra looks even brawnier than before, but is still trying way too hard.

Styling is one of the most important traits of a pickup truck. No matter how tough it is, it needs to look tough, too. The Tundra's slight redesign for 2014 aims to beef up its appearance, and largely succeeds--though as always, beauty is in the eye of the beholder.

Primary aesthetic changes for 2014 include a new grille, hood, and front-end treatment, a new stamped TUNDRA-logo tailgate, and a lightly revamped interior.

The extra focus on the front end of the Tundra might put some buyers off; it's a tall, bluff visage with quite a lot going on. The sides and rear of the Tundra are more familiar, while the new stamped tailgate treatment is understated and rugged.

On the whole, however, the Tundra's full visual package comes off slightly wrong. The proportions are almost cartoonish, the details awkward and overworked. Compared to the (relative) simplicity of the Ram 1500, Chevy Silverado, or Ford F-150, the Tundra comes off as a pretender.

Inside the cabin, there's more overwrought styling clearly intended to shout "This is a truck!" to anyone within its confines. Materials, though improved over last year's Tundra, are still only passable when taken in context of the competition.

Yet despite the excess of styling, the Tundra's cabin somehow comes off plain, as well, with chunky controls sitting like islands in a sea of plastic dashboard.

The 2014 Toyota Tundra performs as well as any Tundra ever has, but still comes up a bit short of the competition.

For truck buyers, the engine and driveline is a huge part of the equation--after all, it's going to be called on to perform strenuous tasks at least occasionally.

In the Tundra, the engine is weak spot, no matter which one you choose. There are three engines available, a 4.0-liter V-6 in the base Tundra, a 4.6-liter V-8, and a 5.7-liter V-8 for those with more serious towing needs. Engines are unchanged from 2013.

While the numbers are generally good across the Tundra's engine range, that's only half of the story. On city streets, in an unloaded truck, both V-8s feel about the same--plenty powerful for getting around in traffic. Strap a hefty load behind the Tundra (it can tow up to 10,400 pounds, depending on equipment and configuration), and the story changes.

Toyota is the only pickup truck manufacturer to adhere to the J2807 standard for two ratings, but despite the technical qualification, the Tundra feels anemic with a load of even 8,000 pounds. Accelerating to freeway speeds within the length of a typical on-ramp while towing is a serious challenge--something that's not true of the top-tier towing configurations from Ford, Chevy, and Ram.

Driving in day-to-day traffic, the Tundra is comfortable and easy-going, with light, quick steering. Ride quality can be a bit jouncy with no load in the bed, but that's true of all pickups to some degree. Despite its positive traits, the Tundra clearly lags behind its American rivals.

The 2014 Tundra has ample room for people and cargo, but its interior leaves much to be desired in quality and materials.

The Tundra is a very large truck. In fact, it's as wide as the law allows for a light-duty truck, and it comes in three cab lengths: Regular, Double Cab, and CrewMax.

The Regular Cab version is best-suited to work truck use, with seating for three at most, with the bench seat, otherwise limited to two bucket seats. There's not much in-cabin storage space, but there's always the pickup bed behind you.

The Double Cab model adds rear-hinged doors and a set of flip-up rear seats. There's not a lot of space in the second row, but kids will fit just fine. The extra space doubles as a convenient weather/theft resistant cargo area when not being used for passengers.

The CrewMax is where the Tundra really comes into its own, with a large second row and four full-sized doors. Seating for five is realistic, with ample leg room for everyone. The rear seats even slide and recline. For those who need to transport three or more people on a regular basis, this is the most practical Tundra.

A center console storage area is large enough to hold file folders or even a laptop, the seats are all comfortable and roomy, and general quietness and refinement in passenger experience are great. Where the Tundra falls a bit short is the quality of materials. Though improved for 2014, they're still a full step behind the Ford F-150, Ram 1500, and Chevy Silverado.

The 2014 Toyota Tundra hasn't been crash tested yet, but the 2013 model has proved its safety merits.

The Insurance Institute for Highway Safety (IIHS) sees things somewhat differently, rating the Tundra range as a whole with across-the-board scores of “good,” though it doesn’t secure a Top Safety Pick award.

For 2014, Toyota adds a new Blind Spot Monitor with Cross Traffic Alert, a first for any full-size pickup in the U.S., included with the Limited CrewMax, Platinum, and 1794 Edition models.

The 2014 Tundra runs the gamut from bare-bones work truck to near-luxury country cruiser.

With three engines, three cab styles, and multiple bed lengths, buying a new Tundra is like building your own custom truck--and that's before you even get to the equipment packages and trim levels.

For 2014, Toyota has simplified the Tundra's option packages while adding some new ones as well. The new 1794 Edition, named in tribute to the Texas ranch where the Tundra plant is located, gets special brown premium leather-trimmed seating with embossed and ultra-suede accents, matching soft-touch materials around the cabin, and all of the features of the Platinum Tundra.

The base SR package includes the work-truck basics like air conditioning and an AM/FM/CD stereo system, but also comes standard with Entune Audio Multimedia Bundle with a 6.1-inch touchscreen display, USB and iPod connectivity; Bluetooth hands-free phone and music streaming; and some voice recognition functions.

Standalone options available on most models include: heated power outside tow mirrors, a deck rail system with adjustable tie-down points, a tow hitch, and a range of 18- and 20-inch wheels.

The 2014 Tundra's V-6 engine is less powerful and less efficient than the competition's V-8s.

The Toyota Tundra is a full-size pickup, so it's inherently limited in its earth-friendliness, but the Tundra's gas mileage is relatively poor even amongst its full-size rivals.

Best truck to own!!! Needs to upgrade MPG. Price is ok.
people found this helpful.
Was this review helpful to you? Yes
USED PRICE RANGE
$19,500 - $46,999
Browse Used Listings
in your area
7.6
Overall
Expert Rating
Rating breakdown on a scale of 1 to 10?
Compare the 2014 Toyota Tundra against the competition
Compare All Cars
Looking for a different year of the Toyota Tundra?
Read reviews & get prices
Related Used Listings
Browse used listings in your area