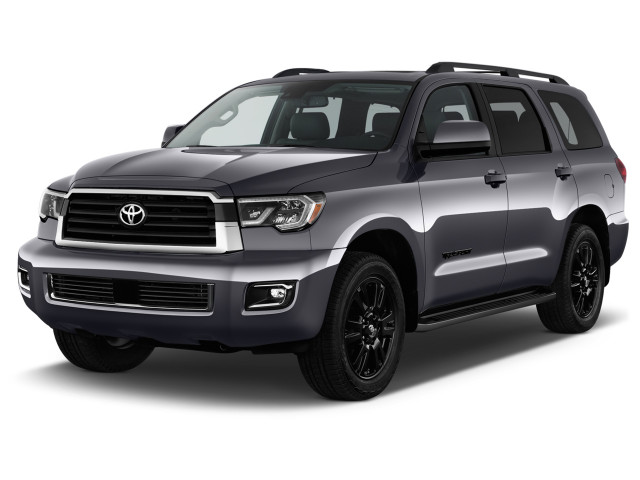 Opting for a Sequoia becomes a harder proposition with every passing year. If you can’t do a Land Cruiser, and need more capability than a Highlander—and have to stay in the Toyota brand—consider a base SR5 Sequoia. Otherwise, there are better picks outside the brand.

The 2018 Toyota Sequoia offers a new off-road focused TRD Sport package for what is quickly becoming an aged full-size SUV.

The 2018 Toyota Sequoia is—like its namesake—a sturdy and massive fixture that not only casts an impressive shadow, but also is big enough to host its own ecosystem. Unfortunately, like the tree from which it’s named, the Sequoia is also remarkably old.

The three-row SUV earns a 5.0 on our overall scale, which reflects its impressive carrying capacity, but also its inefficient V-8 and outdated interior. (Read more about how we rate cars.)

This year, Toyota is trotting out a few tricks to keep the big SUV relevant in the face of newer, more efficient competitors. The Sequoia’s scheme? A 2018 Toyota Sequoia TRD Sport with big 20-inch wheels, black exterior accents, tuned Bilstein shocks, and front and rear anti-sway bars. The rest of the lineup, which includes SR5, Limited, and Platinum trims, gets the once-over treatment with a new grille and LED headlights.

Although the Sequoia is in 11th model year, it still occupies an important niche for Toyota. The Sequoia’s brawny 5.7-liter V-8 and truck-based frame can make it an eight-seat towing rig for big families with bigger toys. On paper, it may sound similar to Toyota’s other big ‘ute, the Land Cruiser, but the Sequoia has a very different, suburban mission.

To that end, the Sequoia comes standard with rear-wheel drive, although all-wheel drive is optional. It’s rated to tow up to 7,400 pounds and its second- and third-row seats fold flat to hold an impressive 120 cubic feet of cargo.

With that power comes great sacrifice—and we mean gas mileage. The 5.7-liter V-8 is rated by the EPA at 15 mpg combined, which is well behind its rivals now.

A slight once-over for the Toyota Sequoia has helped the exterior. We wish we could say the same for the aging interior.

The Sequoia’s big shoulders and wide stance won’t confuse many as to its intentions—it’s based on a truck after all.

Toyota’s stylists have kept the exterior respectable with a light refresh last year, but we can’t say the same about its interior. It earns one point below average for an interior that doubles as a time machine back to 2001. (Read more about how we rate cars.)

This year’s big story is the addition of a 2018 Toyota Sequoia TRD Sport trim that adds 20-inch wheels, blacked out exterior trim pieces, and lashings of chrome around the grille and badges.

The Sequoia opts for a more rounded approach than its contemporaries with broad and curvy shoulders, rounded tailgate accents, and few right angles to be found. The high window line makes the already-heavy Sequoia even bulkier at first glance.

Interestingly, the new additions to the Sequoia’s face are mostly rectilinear: the chrome grille and LED headlights are a confusing face that we don’t see in many other Toyota products. It adds a distinct presence to the new Sequoia, but one that we’re not entirely sold on.

Inside, the Sequoia traces its roots back to the Tundra from which it’s based, but not in good ways. Its matte-metallic plastic trim runs down the busy center console and belies the Sequoia’s uptown starting price of more than $45,000 that can reach up to $70,000 fully loaded.

The big V-8 is best when pressed into towing duty and a composed ride helps the Sequoia stay in the full-size SUV conversation.

For 2018, Toyota added a Sequoia TRD Sport trim to the lineup, which adds a few performance upgrades including Bilstein shocks, and front and rear anti-sway bars.

Aside from those small improvements, the Sequoia’s formula hasn’t changed for a while. Its big 5.7-liter V-8 makes 381 horsepower and 401 pound-feet of torque and is exclusively mated to a 6-speed automatic.

That’s not class-leading hardware, but it’s not bad. We give the Sequoia one point above average for a good ride, but take it back because it's not easy to steer anything this big. (Read more about how we rate cars.)

The V-8 equipped underhood all versions of the Sequoia is a truck motor, first and foremost. Most of its available torque comes on down low in the rev range, at just 2,200 rpm, which is better for pulling heavy trailers. That type of twist has an unexpected benefit: an unladen Sequoia can run up to 60 mph in less than seven seconds.

The Sequoia’s 6-speed automatic is a trusty workhorse, albeit aged. It’s hardly helping fuel-efficiency or relevancy, especially compared to 10-speed units found in the Expedition or Tahoe.

Toyota offers four-wheel drive in every Sequoia, with a two-speed transfer case that contains a Torsen limited-slip differential that regulates power between the front and rear axles. The differential can be locked for trickier terrain, along with an electronic traction control system that can help reduce wheelspin.

Although the Sequoia can point to the last-generation Tundra for much of its running gear, the Sequoia uses a four-wheel independent suspension setup that smooths its ride. The Sequoia will soak up plenty of bumps, but its tall center of gravity still affords plenty of head-tossing around corners. The variable air suspension in Platinum-trimmed trucks can help the Sequoia’s ride become glassy smooth.

The Sequoia can hold a crowd, but its interior is behind the times.

Truck-based SUVs like the Sequoia have a secret to tell: they’re generally not that efficient with their space.

Like others in its class, the 2018 Toyota Sequoia isn’t as comfortable as you might think. The third row isn’t suitable for adults, and its fit and finish was left behind somewhere in 2007.

Starting from a baseline of 5, we give the Sequoia one point above average for its sheer size and cargo capacity. Then we take one back for less-than-pleasant benches, and another for the interior feel that’s not befitting an SUV from this decade. We give it a 4 out of 10. (Read more about how we rate cars.)

If moving people is your mission, a Toyota Highlander may be a more efficient and more comfortable option. Like the Sequoia, the Highlander features three rows of seats, but the Highlander includes more family-friendly features and is much easier to climb into and out of for most people.

If you’re set on a Sequoia, the first two rows will be the best options. The seats are wide and soft, and the second row can slide fore and aft for more leg room.

The third row can be folded down for more cargo storage (top trims feature a power-folding third row) and second-row captain’s chairs can replace the bench for more comfortable confines.

Inside, there are plenty of storage cubbies and cupholders, but the Sequoia lacks USB power ports for every seating position as found in other family haulers these days.

Despite the Sequoia’s high price, the interior feels decidedly less than luxurious. Hard plastics abound, and the climate control dials—while functional—are from another decade.

Federal and independent testers haven’t found a wall big enough to run the gigantic Toyota Sequoia through, which means we can’t assign it a safety score. (Read more about how we rate cars.)

There is good news, though. Toyota has made standard on all models of the Sequoia its suite of advanced safety features, including blind-spot monitors with rear cross-traffic alerts, forward-collision warnings with automatic emergency braking, and lane departure warnings.

A rearview camera is standard, a helpful feature for such a large SUV.

Used Toyota Sequoia for sale near

The Toyota Sequoia has impressive standard features, but lacks some of the high-tech conveniences of its rivals.

The 2018 Toyota Sequoia boasts an impressive array of standard equipment, which includes a newly standard rearview camera, and a good standard infotainment system.

We give the Sequoia two points above average for both highlights, and a 7 out of 10 for features. (Read more about how we rate cars.)

The new TRD Sport model adds to that with 20-inch wheels, blacked out exterior trim pieces, off-road shocks, and other performance equipment.

Toyota's Entune infotainment system relies heavily on a connected smartphone, but it is easy to operate and offers one of the more intuitive navigation interfaces on the market.

The 2018 Toyota Sequoia won’t pass many gas stations without stopping.

Among the reasons to consider a Toyota Sequoia, fuel economy isn’t one of them.

The Sequoia’s combination of a hulking V-8, 6-speed automatic, and heavy frame result in an EPA rating of just 13 mpg city, 17 highway, 15 combined with rear-wheel drive.

That’s good enough for a 4 out of 10 on our efficiency scale. (Read more about how we rate cars.)

The four-wheel-drive version of the Sequoia is less impressive at 13/17/14 mpg.

The Chevy Tahoe manages at least 18 mpg in the combined cycle and the new Ford Expedition does better.

Simply put, the Sequoia is past its prime.

Be the first one to write a review on 2018 Toyota Sequoia
Rate and Review your car for The Car Connection! Tell us your own ratings for a vehicle you own. Rate your car on Performance, Safety, Features and more.
Write a Review
USED PRICE RANGE
$31,922 - $56,995
Browse Used Listings
in your area
5.0
Overall
Expert Rating
Rating breakdown on a scale of 1 to 10?
Compare the 2018 Toyota Sequoia against the competition
Compare All Cars
Looking for a different year of the Toyota Sequoia?
Read reviews & get prices
Related Used Listings
Browse used listings in your area