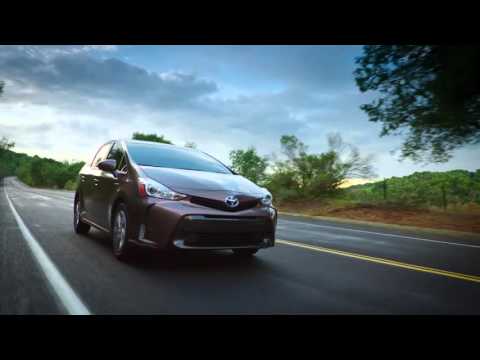 Assessing different trim levels of the 2016 Toyota Prius V, we suspect most buyers will find that the basic Two or the more common Three trim level offer most of what they want at a decent price. Swankier versions push the price surprisingly high, more than offsetting any fuel savings you achieve.

The 2016 Toyota Prius V is the largest, most practical, and most family-friendly vehicle in the Prius lineup.

Entering its fifth year on the market, the 2016 Toyota Prius V wagon remains the largest and most capacious member of the Prius hybrid family. It has a taller, boxier version of the family Prius shape, but uses the same powertrain as the last generation of Prius liftback—sacrificing some performance and a bit of fuel efficiency in what is obviously a heavier and bulkier vehicle.

Despite its tall shape, the Prius V isn't a crossover utility vehicle; it has the ground clearance of a car, not a truck, and all-wheel drive isn't offered. The all-new Prius liftback may apparently offer an e-AWD option, though, so a redesigned Prius V down the road might have the same, increasingly popular option. In its current form, however, it's rated at an impressive 42 miles per gallon combined, in a five-passenger vehicle that will hold a full family and its luggage as well.

Despite looking like a wagon version of the classic Prius, the two cars actually share no body panels at all. The taller, more slab-sided shape of the Prius V, along with a vertical liftgate, sets it apart from the sloping roof and horizontal liftgate of the Liftback. The V is taller, wider, and, as a result, heavier than its sibling.

Last year the Prius V received a styling update, with new headlights and taillights and an edgier, more aggressive front end. The headlights are now slimmer and flow into the grille opening, and fang-like slits extend below them—making the look both wider and lower. Drivers familiar with the traditional Prius are likely to appreciate that the V's rear window is a single piece of vertical glass rather than the split panes of the Prius hatchback, one of them all but horizontal and the other upright but shallow.

Inside, occupants sit higher and more upright than in the Prius liftback. The front seats are comfortable, and the 60/40-split rear seat back reclines, an unusual feature in cars of this size. As a family vehicle, the Prius V is stuffed with accessible trays, cupholders, and cubbies for family oddments—no more high "flying buttress" center console—plus a center arm rest topping a storage bin between the seats. Similar to the old Liftback, a somewhat random array of icons, diagrams, readings, and symbols in full color sits just below the lower edge of the windshield. They're less coherent and visually appealing than the handsome full-color graphics of cars like the Chevrolet Volt or Ford C-Max.

But families want interior space, and the Prius V's got it. Depending on whether you slide the rear seat forward or back, the rear load bay offers 34.3 to 40.2 cubic feet of cargo volume. Flip the 60/40-split rear seat back down and it grows to 67.3 cubic feet. As Toyota points out, that's more than many of the new small SUV and crossover entries. Even better, there's a wide 39 inches between wheel-well housings, meaning large boxy items slide easily across the flat load floor. While Toyota has fitted a vinyl cover to shield the gap between the load floor and the folded seat back when the rear seat is moved forward, however, we still managed to drop more than one item into the abyss.

Toyota carried over the last-generation Prius Liftback drivetrain almost intact into the Prius V, and the 300-pound weight gain of the bigger wagon really shows up here. The 98-horsepower, 1.8-liter inline-4 and pair of electric motor-generators struggles under heavy loads, on steep hills, and when the car is filled with people and cargo. The Prius V is both slower and more prone to engine howling under maximum power than the Liftback—which was hardly a speed demon itself. You'll find yourself having to plan fast uphill merges with some care to make the most of the limited power.

As with other Prius models, there's a choice of three drive modes in addition to the standard hybrid default. Eco promises fuel economy better than the rated 42 mpg combined; Power is meant for those steep hills; and EV offers all-electric drive, at low speeds to the limit of the battery's energy capacity. But Eco mode is almost intolerably slow—we'd say it's borderline dangerous in some driving conditions—and Power mode simply lets the hybrid wagon keep up with fast-moving traffic. The EV mode worked as promised, though, giving all-but-silent electric travel for up to 1 mile.

The 2016 Prius V once again has been designated an IIHS Top Safety Pick+. It earns the top rating of "Good" on all of the institute's tests, including the agency's new headlight test—it was the only car out of the 86 tested that passed. The NHTSA has not, however, tested or rated the redesigned Prius V.

Seven airbags come as standard on the Prius V, and the available Advanced Technology package adds lane-departure warning and automatic high-beams to its list. It also offers a pre-collision system and radar-based adaptive cruise control.

All Prius V models include automatic climate control, a tilt/telescoping steering wheel, a rearview camera, keyless entry, fabric seats, and the Entune cloud-based multimedia system. There are four trim levels: Two, Three, Four, and Five. Upgrade from the base Two to the Three, and you add Bluetooth, audio, and climate controls on the steering wheel, a 4.2-inch color information screen in the gauge panel, and a navigation system with voice control that displays on the 6.1-inch central touchscreen.

The Prius V Four adds SofTex upholstery, heated front seats, and an eight-way power driver's seat with adjustable lumbar support, along with an auto-dimming rearview mirror. And at the top of the range, the Prius V Five—which takes you well into the mid-$30,000 range—includes LED headlamps, fog lamps, and 10-spoke 17-inch alloy wheels.

There's a lengthy list of options, both in packages and sold individually. Of special note is the Advanced Technology Package, which wraps together a panoramic moonroof with electric sunshades, radar-based dynamic cruise control, an HD-based navigation system, automatic high beams, and a lane-departure warning system. Toyota also includes one year of the Safety Connect system, which provides drivers with roadside and emergency assistance, stolen-vehicle location, and automatic notification of emergency services in the event of a collision.

Still, there's that fuel efficiency. The EPA rates the Prius V at 44 mpg city, 40 highway, 42 combined. That's better than the Ford C-Max Hybrid, whose ratings have been lowered twice, and the Prius wagon offers more interior room to boot. (The Ford has a nicer interior and is considerably quieter, however.)

1 Review
5 star
4 star
100%
3 star
2 star
1 star
Rate and Review your car for The Car Connection! Tell us your own ratings for a vehicle you own. Rate your car on Performance, Safety, Features and more.
Write a Review
2016 Toyota Prius V 5-Door Wagon Five (Natl)

So much Road Noise!

I love the car but I can't take the road noise! I am excited that the lease is almost over. I am trying to find a new quite car with the same cargo space and good gas mileage
people found this helpful.
Was this review helpful to you? Yes
USED PRICE RANGE
$13,650 - $22,986
Browse Used Listings
in your area
7.4
Overall
Expert Rating
Rating breakdown on a scale of 1 to 10?
Compare the 2016 Toyota Prius V against the competition
Compare All Cars
Looking for a different year of the Toyota Prius V?
Read reviews & get prices
Related Used Listings
Browse used listings in your area
See More Used