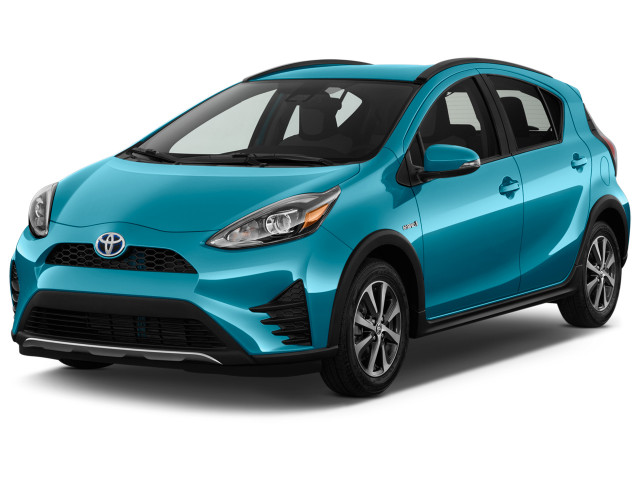 The 2018 Toyota Prius C is an old model in a time of cheap gasoline; if you want one, hold out for deep discounts and you may get them.

The 2018 Toyota Prius C is showing its age; it lacks refinement and is no longer top of the pack on fuel economy, while cheap gas makes the $20K price a heavy lift.

The 2018 Toyota Prius C is the least expensive hybrid from the company that’s made more hybrids than any other. Now in its seventh and perhaps last year, the 2018 Prius C is a compact hatchback that’s the smallest of the four-car Prius lineup. For 2018, it gets some minor styling tweaks after a more comprehensive front and rear restyle last year. The trim levels are easy to understand: they’re called One, Two, Three, and Four.

We rate the 2018 Toyota Prius C at 5.2 points out of a possible 10, which is slightly above average for new cars, buoyed by its fuel economy score. (Read more about how we rate cars.)

A small 1.5-liter inline-4 is paired to Toyota’s hybrid system and a scaled-down battery pack small enough to fit under the rear seat. Inside, the Prius C is more conventional than the Space Age design of other Prius models, but it’s also clearly an economy car, with basic plastics and not a lot of noise suppression.

On the road, the Prius C is slow and when pressed, remarkably noisy. It gets more fun if you push it hard, but the noise and lack of power mean you’ll pay the price for any attempts at street-racer antics. Toyota added modern electronic safety features to the littlest Prius last year, but it still lacks a number of features now offered in newer subcompacts.

With its closest competitor, the unsuccessful Honda Insight, now gone from the market, the Prius C competes with a range of less expensive but newer and nicer subcompact sedans and hatchbacks. It may also vie with the latest generation of the larger Prius Liftback, which was entirely redesigned in 2016.

With gasoline cheap these days, its mix of high fuel-economy ratings and lower price may not be as appealing as they were when it launched. And the subpar performance and refinement are hard to escape, especially against its much-improved big brother, the Prius Liftback.

The 2018 Toyota Prius C has more conventional design than other Prius models, but its interior still says econobox.

The 2018 Toyota Prius C doesn’t “look like a hybrid,” and its smooth rounded nose and conventional side profile and tail are especially welcome against the odd and overwrought lines of the larger Prius Liftback. It doesn’t have a two-part rear window or the horizontal tailgate of the main Prius. Its conventional hatchback is flanked by two vertical taillights and capped by a long roof spoiler, for aerodynamic reasons. Many people might never know it’s a hybrid at all.

We give the Prius C 4 out of 10 points for design and styling, docking it a point for some cheap painted-metal areas inside. (Read more about how we rate cars.) Upgrades this year include new 15-inch eight-spoke machined alloy wheels with dark grey accents, and black accents on the roof rails, side rockers, and wheel-arch moldings.

The interior of the Prius C still features a multi-information display in the center of the dash just below the windshield, but items like the switches and console are conventional—and may well be familiar to Yaris owners. The oddball Prius drive selector stalk is gone, replaced by a conventional chrome shift lever on the tunnel. Three years ago, Toyota upgraded some interior plastics and materials, but while that helps, the little Prius suffers in comparison to the modern, intuitive dashboard and controls of the Hyundai Ioniq Hybrid. Doors close with a hollow thud, and the overall impression remains more econobox than finely engineered hybrid.

The 2018 Toyota Prius C is best nipping around town, where its low power and noisy acceleration are less obvious.

The powertrain of the 2018 Toyota Prius C hasn’t changed in seven years: it’s a 73-horsepower 1.5-liter inline-4 paired to 60-hp electric motor, giving a total combined output of 99 hp. It’s not a fast car, and you may have to work at it to keep up with traffic consistently. That in turn will produce a lot of noise from the small engine as it puts out its full, meager power. We rate the Prius C at 3 out of 10 for its performance, docking it one point each for slow acceleration and lack of refinement in the process. (Read more about how we rate cars.)

Like the Ioniq Hybrid, the Prius C sites its battery pack (a 0.9-kwh unit) under the rear seat next to the gas tank, giving it a full-depth cargo bay. If you want to use all of that battery, a dash button lets drivers choose EV mode, but it lasts only half a mile or so at low speeds. An Eco mode cuts the climate-control outputs for better fuel economy; we tested it for half a mile and then gave up. Frankly, even driven energetically, the Prius C should return real-world fuel economy somewhere in the 40s, at least in temperate climes.

Against the previous generation of Prius Liftbacks, the Prius C felt nimble and communicate on the road. But the latest version, launched in 2016, is notably better on that score, and the Prius C is now only about average for subcompacts. It’s best in urban traffic, zipping around town and jousting for stop-light positions and tight parking spots. It’s not even close to a sporty hatch, but it’s not bad to toss around. On the highway, though, the noise and low power make it less fun.

The 2018 Toyota Prius C is well-built, not unexpectedly, and surprisingly roomy, but below par on noise suppression.

While the 2018 Toyota Prius C is nominally a subcompact, you may be surprised at its interior volume. That’s due to its wind-cheating length, making it possible to seat four 6-foot adults inside the little Prius with a bit of horsetrading for front-seat position. The seats themselves are thin but adequately comfortable, and access from relatively long doors is good as well.

We rate the Prius C at 4 out of 10 for quality, with its lack of soundproofing a major drawback even against other competitors in its class. (Read more about how we rate cars.)

The cockpit offers cupholders, bins, and cubbies for storage, and a decent 17.1 cubic feet of cargo room with the rear seat up. The taller load bay may prove more useful than the more raked tailgate and longer, flatter shape of the Ioniq Hybrid’s cargo area. Build quality was good in all the Prius C models we’ve driven.

The 2018 Toyota Prius C has incomplete ratings from the NHTSA, but includes a competitive suite of active-safety features and a standard rear-view camera.

The 2018 Toyota Prius C is something of a mixed bag when it comes to safety. This year, Toyota has made a rearview camera standard on all versions of the Prius C. But its safety scorecard is mixed, with the IIHS giving it mostly "Good" scores, except for an "Acceptable" rating in the small-overlap crash test.

Federal testers give the Prius C a four-star rating across the board. It loses a point for its federal score but gains it back in its advanced safety features. It earns a 5 out of 10. (Read more about how we rate cars.)

Its standard safety equipment includes nine airbags and the awkwardly named Toyota Safety Sense-C, made up of automatic emergency braking, lane-departure alert, and automatic high beams. The latter have proved to work fairly well in other Toyota models we’ve tested this year.

The 2018 Toyota Prius C offers a competitive feature set against other subcompacts, but it’s no longer ahead of the pack.

The 2018 Toyota Prius C comes in a logical progression of trim levels, helpfully named One, Two, Three, and Four. All versions, even the base Prius C One, include standard LED headlights and taillights; automatic climate control; power windows, locks, and mirrors; keyless entry; a 6.1-inch touchscreen with a USB port; and a rearview camera. That was a pretty advanced package in 2012, but now it’s only average. We give the Prius C 6 out of a possible 10 points for its features. (Read more about how we rate cars.)

Moving up the range, the Prius C Two adds an engine immobilizer, cruise control, and split-folding rear seats for more cargo flexibility. The Three layers on satellite and HD radio and a built-in navigation system. At the top of the range, the Prius C Four provides niceties like heated seats and outside mirrors, LED fog lamps, and optional alloy wheels of a different design. For the Three, only a single option is available, a moonroof.

Interesting in an aging but fuel-efficient small hatchback, at a price starting around $20,000, may be low in these days of low fuel prices. Sales of the Prius C have fallen every year since 2013.

The 2018 Toyota Prius C no longer offers the highest fuel economy of any hybrid, though it’s still far better than most other cars on the market.

The 2018 Toyota Prius C is rated by the EPA at 48 mpg city, 43 highway, 46 combined. That’s lower than when it was launched, at a combined 50 mpg, due to changes in the ratings formulas introduced by the agency for 2017.

It’s still higher than most other cars on sale and certainly any other subcompact, and we give the Prius C 9 out of 10 points for fuel economy. (Read more about how we rate cars.)

A new competitor, the Hyundai Ioniq Hybrid, is rated at a combined 55 mpg, notably higher. For better ratings yet, its fuel-efficiency champ, the Ioniq Hybrid Blue, comes in at 58 mpg—the single highest combined rating of any car sold in the U.S. this year.

Be the first one to write a review on 2018 Toyota Prius C
Rate and Review your car for The Car Connection! Tell us your own ratings for a vehicle you own. Rate your car on Performance, Safety, Features and more.
Write a Review
USED PRICE RANGE
$13,900 - $28,000
Browse Used Listings
in your area
5.2
Overall
Expert Rating
Rating breakdown on a scale of 1 to 10?
Compare the 2018 Toyota Prius C against the competition
Compare All Cars
Looking for a different year of the Toyota Prius C?
Read reviews & get prices
Related Used Listings
Browse used listings in your area
See More Used
The Car Connection Daily Headlines