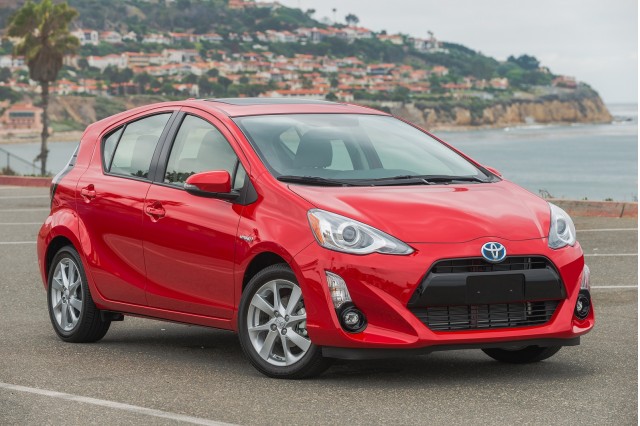 If you're going purely for fuel economy, go for the most basic 2016 Toyota Prius C—the One trim level—which offers a decent list of standard equipment for its segment.

The 2016 Toyota Prius C remains the least expensive hybrid and retains a 50-mpg rating; it's happier in crowded cities than for long-distance highway travel.

The 2016 Toyota Prius C remains the least-expensive hybrid car sold in the U.S. and the smallest of three different vehicles in the Prius family. It continues to be rated by the EPA at 50 mpg combined. After styling and interior upgrades last year, the 2016 model has only one significant change: the addition of a standard Toyota Safety Sense-C package of electronic active-safety systems. There's also a limited-edition Prius C Persona Series model.

The Prius C is about $5,000 less expensive than this year's all-new Prius Liftback, a car that's more pleasant, refined, and conventional to drive even as it takes Prius styling in some new and polarizing directions. Still, the Prius C remains a small car, and it sports a smaller hybrid powertrain and less-refined driving than its larger siblings.

In profile, the Prius C looks conventional enough that you might not realize it's a Prius at all. A smooth, rounded, swept-back nose leads into smooth sides and a more conventionally vertical tail than the larger Liftback model. There's no two-piece rear window here, just a regular top-hinged hatchback flanked by high vertical tail lamps and topped by a surprisingly long roof spoiler—to cut fuel-wasting air turbulence at speed. Last year's styling update brought a more aggressive front end with a large open maw that replaces the earlier happy face, along with a handful of bright new exterior colors.

The interior too is more conventional than the Prius Liftback, though last year's trim upgrades and better plastics and fabrics still don't live up to the quality of the all-new "regular" Prius. Some painted metal is even visible in parts of the interior—one way Toyota can keeps the price at about $20,000 with a full hybrid powertrain. A classic multi-information display is mounted below the windshield in the center of the dash, but the dash switches and console are conventional—and some controls may look familiar to Yaris owners. There's no oddball, stubby Prius drive selector stalk, just a conventional chrome shift lever on the tunnel.

Still, while the Prius C is officially a subcompact, it's longer than many other entries in that segment. That increases its interior volume, making it a genuine four-adult car. The front seats are about the same as older Prius models: thin, but adequately comfortable. Two 6-foot adults will fit neatly in the rear, requiring only some negotiation with front-seat riders. Build quality was good in our test cars.

The littlest Prius's 1.5-liter inline-4 has an output of only 73 horsepower, and it's paired to a more compact hybrid system than those of its larger siblings. The engine and two motor-generators put out a total of 99 hp. But the Prius C really wins in packaging: both a 0.9-kwh lithium-ion battery pack and the car's gasoline tank are sited under the rear seat. That gives the car a full-depth load bay, meaning no compromise in usability against any other car of the same size.

A few minutes behind the wheel shows that the Prius C is hardly a fast car. Work it hard and it'll keep up with traffic handily; you just have to be willing to endure the noise produced by its small engine at full power. An EV mode activated by a button on the dash will keep the car in all-electric drive at low speeds, but only for up to half a mile. There's also an Eco mode, which caps power output and lowers the climate-control settings, for even thriftier use of fuel. But the price for that is painfully flow travel; we dutifully tested it, then switched it off. You'll likely find the Prius C to suitably efficient even when driven energetically. Our road tests indicate that the 50-mpg rating should be easily achievable, at least in temperate climates.

Handling and roadholding are more communicative and far less numb than the larger members of the Prius family used to be, though the all-new Liftback model is far, far better than any Prius before. The Prius C more agile, and it's perfectly suited to jousting in urban traffic, tight parking spaces, and any other use for which a small, maneuverable hatchback excels. It's far from the dynamics of a sporty hot hatch, but it's adequately rewarding to toss around.

On safety, the Toyota Prius C has a mixed record. Two years ago, the IIHS tested its performance on the new and tougher small overlap frontal-crash test and rated it "Poor." Structural changes made to the car later boosted the rating on that test to "Acceptable," one level below the top "Good." The IIHS gives the Prius C a rating of "Good" on every other test. As for federal safety regulators, they gave the 2015 car four out of five possible stars in every one of its tests—and added a footnote to its ratings that explained the car had unspecified safety issues during testing not reflected in the points used to assign ratings. The NHTSA hasn't yet rated the 2016 model for overall or frontal crash safety.

However, this year the Prius C gets the Toyota Safety Sense-C package of electronic active-safety systems as standard equipment. Its features—lane-departure assist, pre-collision braking, and automatic high beams—aren't as extensive as the most advanced systems Toyota offers, but this is also a $20,000 car. It also comes with nine standard airbags, plus the usual stability control and brake assist for the anti-lock brakes.

Four trim levels are offered for the 2016 Prius C: One, Two, Three, and Four. Every Prius C, even the base One model, offers standard power windows, mirrors, and locks; automatic climate control; keyless entry; and a sound system that includes a USB port (and iPod capability). When it was launched, that was a package few subcompacts could claim; now, it's becoming more common. As you move up the Prius C range, the Three model includes both an in-dash navigation system and the Entune interface for the audio and infotainment system. Then, at the top of the line, the Prius C Four includes such niceties as alloy wheels, heated seats, fog lamps, and a rearview camera.

There's just one option package for the cars below the Four: it bundles together a moonroof and alloy wheels. For 2016, Toyota is also offering 1,500 units of the Prius C Persona Series Special Edition, painted only in black with either Electric Lime or Cherry Pearl accents on the lower front grille trim, beneath the headlights, on trim beneath the side windows, and covering the outside power mirrors and interior rear-view mirror shell.

And the base price around $20,000 still gets you the highest gas mileage rating of any non-plug-in car sold in the U.S. this year. How appealing that may be in a year of gasoline around $2 a gallon is debatable; Prius C sales have fallen each year since 2013.

2 Reviews
5 star
100%
4 star
3 star
2 star
1 star
Rate and Review your car for The Car Connection! Tell us your own ratings for a vehicle you own. Rate your car on Performance, Safety, Features and more.
Write a Review
For 2016 Toyota Prius C