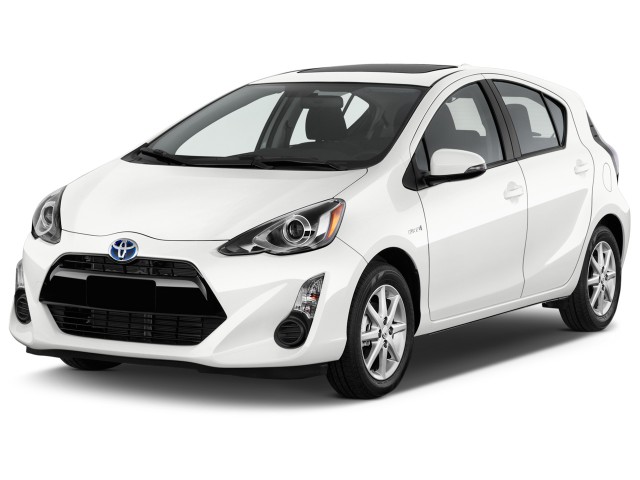 Even the most basic Prius C One includes a strong list of standard equipment, even when compared to non-hybrid hatchbacks of its size.

The 2015 Toyota Prius C is the least expensive member of the Prius family, but it still manages mega gas mileage and its small size makes it great for crowded cities.

For its fourth model year, the 2015 Toyota Prius C--the smallest and least-expensive of the four different Prius hybrids--gets some styling upgrades and a better-quality interior. Like two of its three bigger siblings, the subcompact Prius C is rated by the EPA at 50 mpg combined. But now there's edgier styling that includes new headlights and tailllights, including "light pipes" in the rear units. Three bright new exterior colors continue the littlest Prius's tradition of big, bold, eye-scorching paint shades, and there are trim upgrades too. The base model gets new wheel covers meant to look less basic, and inside the car, the fabric and plastics convey a more expensive cabin.

Still, the Prius C remains a small car, and it sports a smaller hybrid powertrain than its larger siblings. It's roughly $5,000 less expensive than the high-volume classic Prius Liftback model, which will be replaced in the next year or two. More importantly, with the demise last year of the Honda Insight hybrid, it's now the lowest-priced hybrid car you can buy in the U.S.

At least from the side, the Prius C looks conventional enough that you might not realize it's a Prius--until you see the badges or its 50-mpg rating. Its shape combines a smooth, rounded, swept-back nose and smooth sides with a more conventionally vertical tail than the larger Prius liftback. The 2015 update brings a slightly more aggressive front end to replace the original happy face. This styling is very much in line with that of the similarly sized Toyota Yaris as well as the latest Camry. It seems Toyota is getting edgy with its styling, perhaps to appear more youthful. For the Prius C, it works. There's no two-piece rear window here, just a conventional top-hinged hatchback flanked by high vertical tail lamps and topped by a surprisingly long roof spoiler--again to reduce fuel-wasting wind turbulence at speed. Especially from the rear, there's really nothing that reads "hybrid" except for a Hybrid Synergy Drive badge.

Inside, too, the 2015 Prius C is more conventional than its larger siblings. It's deemed a subcompact, but it's longer than most other cars in that segment, which boosts interior volume. There's a classic Prius Multi-Information Display mounted in the center of the dash, just below the windshield, but both the console and the dash controls are much more conventional than in other Prius models. Rather than the oddball, stubby Prius drive selector stalk, the smallest Prius uses a conventional chrome shift lever mounted on the tunnel. Anyone who's been in a Toyota Yaris subcompact recently will recognize quite a few of the other switches and knobs as well.

The front seats are about the same as any other Prius model: thin, but comfortable enough. We were surprised that two six-foot adults fit neatly in the rear, with a bit of negotiation with front-seat riders. The quality of the interior trim is about par for a subcompact, but definitely a step down from other Prius models. There's even some painted metal visible in certain areas--that's one way Toyota keeps the price under $20,000 in a car with a full hybrid powertrain. Our test cars have all been built and assembled well, without squeaks or other glitches.

The Prius C is a dedicated hybrid model, meaning there's no gasoline-only version. Its 1.5-liter four-cylinder engine has an output of only 73 horsepower, and the Hybrid Synergy Drive system it's paired with is more compact than its big brother's. Together, the engine and two motor-generators put out a total of 99 hp. But where the Prius C really wins is in packaging: Toyota managed to house both a smaller 0.9-kilowatt-hour battery pack and the car's gasoline tank under the rear seat, providing a full-depth load bay--unlike the defunct Honda Insight, with a battery underneath its much shallower cargo area.

The EPA 50-mpg fuel-efficiency rating breaks down to 53 mpg on the city cycle (higher than the Prius Liftback) and 46 mpg on the highway (lower than the Liftback). The differences compared to the longer liftback are due to the difficulty in making such a short, stubby car aerodynamic; the liftback's shape is superior but would not be practical on a car of the C's length.

The Prius C isn't a fast car, but work it hard and it'll keep up with traffic. Toyota offers an EV mode that can keep the car in all-electric drive at low speeds for up to half a mile; it's activated with a pushbutton on the dash. Then there's an Eco mode, which lowers the climate-control settings and caps power output, for even thriftier use of fuel at the price of sloooow travel. We tested it dutifully, and then switched it off--and found the Prius C to be quite economical even when driven energetically.

On the road, the smaller Prius C feels more communicative and far less numb than the larger members of the Prius family. It's far more agile, and it's perfectly suited to tight parking spaces, city street jousting, and anywhere else a small, maneuverable hatchback excels, while able to carry four people and their gear. Let's be clear: The Prius C has nothing like the dynamics of a sporty hot hatch. But relative to its larger siblings, it's more rewarding to toss around. Owners will get their biggest payoff at the pump. A 50-mile road test in Southern California--with stop-and-go city traffic, rural two-lane roads, and fast freeway travel--yielded an indicated 52.4-mpg mileage reading. That's good.

The littlest Prius has a somewhat mixed safety record. It comes with no fewer than nine standard airbags, plus the usual suite of electronic safety systems, including stability control and Brake Assist for the anti-lock brakes. Until 2013, the Prius C was named a Top Safety Pick by the Insurance Institute for Highway Safety (IIHS), which awarded the car its top rating of "Good" in every category. But for 2014, the IIHS tested its performance on the new and tougher Small Overlap frontal-crash test and rated it as "Poor," meaning the Prius C lost its Top Safety Pick title. The National Highway Traffic Safety Administration (NHTSA) gave the car four out of five possible stars in every one of its tests--and added a footnote to its ratings that explained the car had unspecified safety issues during NCAP testing that were not reflected in the points used to assign ratings.

The 2015 Toyota Prius C comes in four trim levels, known as One, Two, Three, and Four. The price of a Prius C One starts around $20,000. Every Prius C, even the base model, offers quite a lot of standard equipment, including power windows, mirrors, and locks; automatic climate control; keyless entry; and a sound system that includes a USB port (and iPod capability). But those base models use an old-fashioned ignition key to start the car, rather than the "Start" button found on pricier Prius models. And that price still gets you the highest gas mileage rating of any non-plug-in car sold in the U.S. this year.

As you move up the Prius C range, the Three model includes both an in-dash navigation system and the Entune interface for the audio and infotainment system. Then, at the top of the line, the Prius C Four includes such niceties as alloy wheels, heated seats, and fog lamps; for 2015, it also adds a rearview camera. There's just one option package for the cars below the Four: it bundles together a moonroof and alloy wheels.

And while even that base price is a couple of thousand dollars more than a comparably equipped gasoline subcompact hatchback, the Prius C can potentially deliver a payback in its vastly improved fuel economy. To make the math easy, assume that a regular subcompact gets 33 mpg against the Prius C's 50 mpg. Assuming you can avoid one extra gallon of gasoline every 100 miles, that gives a possible payback in as little as 50,000 miles (assuming $4-a-gallon gasoline). Your mileage may vary, of course, and it all depends on how many miles you cover each year.

Love my PriusC. This is my second one.

I love the way it drives. The brakes are awesome. I work 27 miles from home, and as long as I stay of the interstate I average over 60 MPG.
people found this helpful.
Was this review helpful to you? Yes
For 2015 Toyota Prius C

Love it!! 5 on everything

Best investment I have ever made.

All in all, though, this is the perfect low-end hybrid vehicle for someone who mostly drives around town, zipping in and out of urban parking spaces on the way to the museum, the grocery store or the hair salon. It's not meant to be a highway automobile, and gas mileage on the big roads, while still terrific on the freeway, is closer to 45 mpg than the 60 I routinely get in the city.

So I'll keep my Prius C, defending it against those who tease me for being a hippie or an environmentalist. And I'll proudly proclaim my fuel economy in the face of any Suburban-owning critic out there. + More »
people found this helpful.
Was this review helpful to you? Yes
2015 Toyota Prius C 5-Door HB Two (GS)

the seats in this vehicle will make you disabled!, i purchased this car and have developed serious back pain after a few months of driving it
people found this helpful.
Was this review helpful to you? Yes
USED PRICE RANGE
$8,988 - $17,000
Browse Used Listings
in your area
6.8
Overall
Expert Rating
Rating breakdown on a scale of 1 to 10?
Compare the 2015 Toyota Prius C against the competition
Compare All Cars
Looking for a different year of the Toyota Prius C?
Read reviews & get prices
Related Used Listings
Browse used listings in your area
See More Used