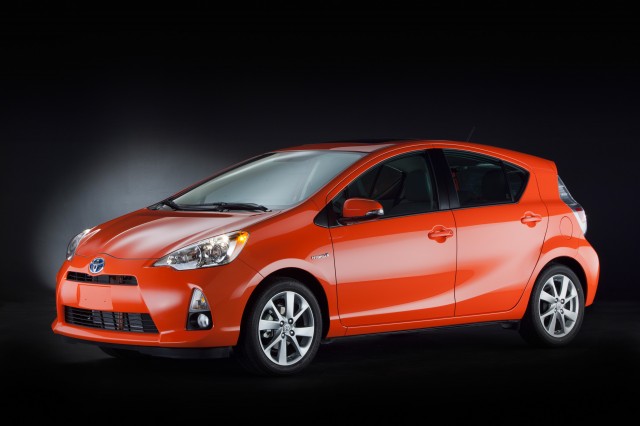 Right after launch time, the Prius C is selling at a premium in some regions, with some dealerships reportedly adding a surcharge. If you see this, just waiting a month or two might be enough for supply to get up to pace with demand.

The 2012 Toyota Prius C takes full advantage of the other Prius models' hybrid system, but it's smaller, leaner and--perhaps most importantly--more affordable.

Toyota sells far more hybrids than anyone else, thanks mainly to its iconic Prius and its industry-leading (for non plug-ins) 50-mpg EPA Combined mileage rating. But this year, it's different; Toyota has rounded out the Prius line with two new body styles. First, there's the Prius V, a larger wagon version, which arrived earlier this model year; and now the 2012 Prius C has arrived, appealing to those who want a simpler, more compact car.

With a more familiar, traditional small-car profile and package, yet the same best-in-class 50-mpg figure (actually 53 mpg city, 46 highway)—matched with a base price of just $19,710—the Prius C should attract a wider swath of value-conscious motorists.

As the third (and smallest) unique body style in the Prius family, the Prius C is about 157 inches long and 67 inches wide. It's closer in size to the Toyota Yaris Liftback than to the Toyota Matrix—meaning it's a true subcompact, and you get all the maneuverability and parking advantages. Matched with that more ordinary five-door profile is a smooth, low front end and drawn-back headlamps that closely resemble those used in the rest of the Prius lineup. Meanwhile, the new Prius C doesn't look all that much different than Toyota's somewhat less expensive Yaris, in profile and from some angles. The look is somewhat slab-sided by today's standard, but there is an upkick just in front of the rear wheels. In back, the look is typical for the class, with vertical taillamps and a spoiler smoothing out aerodynamics at the rear of the roofline. Inside, the 2012 Toyota Prius C has an all-new dashboard that draws its centrally mounted Multi Information Display at the base of the windshield from the larger Prius, and some of its switches and minor controls from the Yaris.

The Prius C is smaller and lighter, so its powertrain is downsized to match. There's a 1.5-liter four-cylinder engine, making 73 horsepower, and the automaker's Hybrid Synergy Drive includes a smaller motor system and 0.9-kWh battery pack—with the system altogether making 99 hp. Acceleration is about on par with other eco-minded small cars. Serving as a reminder that performance is definitely not the priority, the Prius C offers an Eco mode, which reduces power output and has different climate-control settings, as well as an EV mode, for going up to a half mile on electricity only, but there's no Power or Sport mode. As for handling, the Prius C is surprisingly nimble and meneuverable, but again, don't expect the dynamics of a sport-tuned hot hatch. But the payoff is clear at the pump: In 50 miles of driving around San Diego—including freeways, two-lane roads, and stop-and-go—we saw a 51.4-mpg average.

There's more cabin space in the Prius C than you might suspect. Front seats feel about the same as in other Prius models; in back there's no mistaking it for a mid-size car, but six-footers should be able to fit without any fuss. The nickel-metal-hydride battery pack, which is smaller than that used in the other Prius models, is packed neatly under the back seat.

Trims and materials feel noticeably cheaper than those you'd find in the current Prius (though about on par with mainstream subcompacts), but assembly quality is good. Toyota has clearly worked to keep cost down, with painted metal visible inside on the window surrounds and hatchback, but the effect is thrifty rather than grim. And in the C, there's a conventional shift lever rather than the smaller shift lever up near the steering wheel you get in other Prius models. In base Prius C One models, there's even a conventional ignition key rather than push-button start.

The Prius C comes with nine standard airbags, along with all the now-typical safety aids such as electronic stability control and anti-lock brakes with Brake Assist. The Prius C is structurally different than the Prius Liftback and the Prius V, and in separate testing has already been named an IIHS Top Safety Pick.

Beginning at $19.710, the Prius C arrives at a price tag that's really just a couple thousand more than a comparably equipped, non-hybrid subcompact—and seeing that the Prius C uses less fuel, it's a difference that you'll likely quickly overcome thanks to cheaper running costs. Four trims are offered—Prius C One, Prius C Two, Prius C Three, Prius C Four. Even the Prius One comes with an impressive level of standard equipment, including keyless entry, automatic climate control, power accessories, and a sound system that includes a USB port (and iPod capability). The Prius C Three includes a navigation system and Toyota's Entune interface, while the Prius Four adds fog lamps, alloy wheels, and heated seats. The only options offered for the Prius C are a moonroof and alloy wheels, sold together in a package.

5 Reviews
5 star
40%
4 star
60%
3 star
2 star
1 star
Rate and Review your car for The Car Connection! Tell us your own ratings for a vehicle you own. Rate your car on Performance, Safety, Features and more.
Write a Review
For 2012 Toyota Prius C

love the economy but don't trust the system at all

I had some problems during the first six months. Theynever knew what the problem was. Although is working ok for the last 3 years, I don't feel confident at all.
people found this helpful.
Was this review helpful to you? Yes
2012 Toyota Prius C 5-Door HB Four (Natl)

This fine little car is a world beater at a consistent 53mpg.

Great all around. Fast enough. Roomy enough. World beater 53 mpg. Exactly what I expected when purchased in 2012.
people found this helpful.
Was this review helpful to you? Yes
2012 Toyota Prius C 5-Door HB Three (GS)

Best car ever mileage is great up to 65 mpg, who does not like that. Push button start hands free phone GPS.everything I want an need in a car. Lov it
people found this helpful.
Was this review helpful to you? Yes
For 2012 Toyota Prius C

Car has a good fuel economy. However, car ground clearance is not good at all.
people found this helpful.
Was this review helpful to you? Yes
For 2012 Toyota Prius C

Fuel consumption lives up to it's claims, the ride is comfortable, refined and quiet and the whole hybrid system is an amazing bit of tech.

The LED headlamps are brilliant. Bright, uniform, wide angle beam covers all of the road and more, making driving at night a pleasant experience to look forward to.

The only down-side of all this design efficiency is that the some of the interior trims being made of light weight plastics have a slightly 'cheap' feel, the doors sound somewhat 'tinny' when closed briskly and the over-all exterior visuals are not as appealing as some of the regular Toyota models. The little trays and holders could do with a thin, non-slip lining to prevent items from sliding around. But this is a small price to pay for the other benefits.

Highly recommended, as we should all be driving these sort of cars as daily runners, before full electrics come to their own.

Rosti,
Sydney, Australia. + More »
people found this helpful.
Was this review helpful to you? Yes
USED PRICE RANGE
$7,950 - $19,998
Browse Used Listings
in your area
7.0
Overall
Expert Rating
Rating breakdown on a scale of 1 to 10?
Compare the 2012 Toyota Prius C against the competition
Compare All Cars
Looking for a different year of the Toyota Prius C?
Read reviews & get prices
Related Used Listings
Browse used listings in your area
See More Used
The Car Connection Daily Headlines