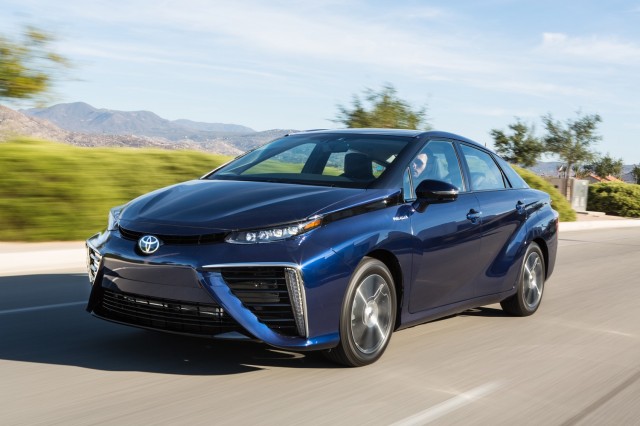 While the zero-emission Toyota Mirai has a rated range of 312 miles, its ability to use that range is severely constraint by the limited availability of hydrogen fueling stations—meaning it's limited to travel within a few launch regions of California.

The 2017 Toyota Mirai sedan has polarizing styling, seats only four, has little acceleration at highway speeds, and can be fueled only in limited regions; while Toyota says it's the future, potential buyers may want to wait and see.

The 2017 Toyota Mirai is the second model year for Toyota's halo car, the only full zero-emission vehicle in its extensive lineup. Its sales are entirely dependent on the rollout of hydrogen fueling infrastructure, for now limiting to specific areas of California. Hence, it will likely sell around 1,000 copies in its first full year on the market. As before, it's offered in only a single trim level with few options.

With Japan officially embarked on a government-sponsored attempt to build a "hydrogen economy," Toyota believes that fuel cells—not batteries—will power the zero-emission vehicles it will build from now through 2050. Just as the first 1997 Prius hybrid was its first effort at a core technology now used in multiple vehicle lines, you can think of the Mirai as a first draft of Toyota's vision for its future.

We give the Mirai overall an overall score of 4.8 out of 10, and much of that is due to its lack of any tailpipe emissions save for water, giving it a perfect 10 on the fuel-efficency scale. (Read more about how we rate cars this year.)

That score is considerably lower than those for other electric and plug-in hybrid vehicles that among them offer less expensive, faster, more capacious, or better-looking options for full or partial zero-emission transportation.

The Mirai is, to be as charitable as possible, strange-looking. Less charitably, it may be the ugliest car sold in the U.S. this year. Huge front-corner intakes feed air to various radiators, compressors, and electronics required for its powertrain. A black-painted recess under the hood makes it appear to float above the front fenders, and the roof similarly seems to float over the windows, using the same trick for the rear pillars.

Inside, the Mirai is somewhat reminiscent of an updated Prius. The look clearly spells out "Futuristic!" Three separate display screens in various parts of the dash generally function well enough once you learn the quirks and peculiarities. (A round button with a "P" wasn't what we were looking for when trying to locate a parking brake.)

The seats are comfortable enough, front and rear, but the Mirai only carries four passengers—to keep the weight of a fifth passenger from reducing its range. Toyota hasn't specified either passenger volume or cargo volume, but while the load bay is enough for casual use, its somewhat compromised by the two cylindrical hydrogen tanks mounted crosswise between the rear wheels under the load deck and below the rear seat

The 2017 Mirai gets its power from a 114-kilowatt (153-horsepower) fuel cell under the front seats, which sends electricity to the electric motor that drives the front wheels. Some energy can also be supplied by the 1.6-kwh nickel-metal-hydride battery pack, which provides short boosts of energy when maximum power is needed, since fuel cells operate at a more steady output level.

On the road, the car accelerates strongly up to 30 mph. Above that level, performance starts to ebb, and the Mirai is notably more sluggish by 60 mph. While the quoted 0-to-60-mph time is about 9 seconds, the car has little power to accelerate above that level—reflecting motor output of just 151 hp in a vehicle that weighs more than 4,000 pounds. That requires careful planning for merging and overtaking at highway speeds.

The pair of fuel tanks together hold up to 5 kg of hydrogen compressed to 10,000 psi. That gives the Mirai a rated range of 312 miles on a full tank. Its overall efficiency hasn't been rated by the EPA, and is likely to be measured in MPGe, or Miles Per Gallon Equivalent, the distance a Mirai can travel on the amount of hydrogen fuel with the same energy content as one gallon of gasoline. That rating, however, is likely lower than the equivalent rating for the most energy-efficient plug-in electric car, which for 2017 is Toyota's own Prius Prime plug-in hybrid.

Handling and roadholding are acceptable but numb, similar to earlier Prius hybrids. Let's say the Mirai doesn't exactly invite drivers to toss it around twisty roads. While the cabin is generally quiet, various background sounds—compressors whirring and vibrating, injectors pulsing, and so forth—that indicate that despite its electric drive, the Mirai isn't a battery-powered vehicle. To be fair, though, the dominant sounds are simply tire and wind noise.

Compared to other cars of its price—it lists at $57,500, though Toyota says nine of 10 Mirai drivers will lease it—the Mirai contains a complement of features more akin to a $35,000 sedan. One unique feature is a power-out socket in the trunk that converts the fuel cell's DC power to the AC electricity that can power a house for a day or two. And the Mirai can safely operate inside a closed garage, unlike a gasoline generator, since its sole emission is water.

No safety ratings exist for the 2017 Mirai, though its heavily armored hydrogen tanks will likely be tougher than the car's steel structure, which is designed to include the usual crush zones. Its very low sales volumes and limited availability may mean it won't be tested for some time.

And that's really the biggest challenge for the Toyota Mirai. For its first several years, its fate depends on the growth of a hydrogen fueling infrastructure to serve it and similarly low-volume hydrogen vehicles from Hyundai and Honda. It is now sold only in limited areas of California. That state has embarked on a program to install several dozen hydrogen fueling stations, now considerably behind schedule. For part of 2016, Toyota provided portable fueling stations at some of the eight dealers qualified to sell the Mirai. Toyota provides free hydrogen fuel for three years or 36,000 miles to every Mirai owner.

Be the first one to write a review on 2017 Toyota Mirai
Rate and Review your car for The Car Connection! Tell us your own ratings for a vehicle you own. Rate your car on Performance, Safety, Features and more.
Write a Review
Browse Used Listings
in your area
4.8
Overall
Expert Rating
Rating breakdown on a scale of 1 to 10?
Compare the 2017 Toyota Mirai against the competition
Compare All Cars
Looking for a different year of the Toyota Mirai?
Read reviews & get prices
Related Used Listings
Browse used listings in your area
The Car Connection Daily Headlines