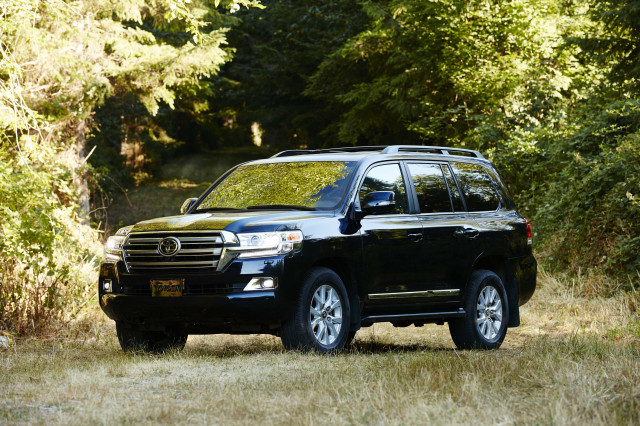 The 2019 Lexus LX 570 costs about the same as the Toyota Land Cruiser, but buyers must pay more for the third row of seats.

The 2019 Toyota Land Cruiser’s go-anywhere capability makes it a cult favorite, but most buyers are better suited to rivals.

The 2019 Toyota Land Cruiser is a large SUV that can deliver far more than what most buyers want. It’s immensely capable over any kind of terrain, which is why the 2019 Land Cruiser and its predecessors have been trusted tools in some of the most remote stretches of the globe.

We rate the latest Land Cruiser at 5.4 out of 10. It’s hurt by a prodigious thirst for fuel and land yacht road manners that may take some acclimation. But if we were stocking our nuclear fallout shelter, we’d turn to the Land Cruiser before any of its rivals. (Read more about how we rate cars.)

Unchanged for the new model year, the current Toyota Land Cruiser dates back to the 2008 model year. In 2016 Toyota updated its looks, fitted a new 8-speed automatic that offers mixed performance, and installed a new infotainment system.

Just one version of the Land Cruiser is available—pick your color. For those who want some customizability, the Lexus LX 570 is a kissing cousin that’s priced about the same (albeit with five seats standard rather than eight), has a longer warranty, and benefits from the brand’s red-carpet service.

Under the Land Cruiser’s long hood sits a 5.7-liter V-8 rated at 381 horsepower that sends power to all four wheels via an 8-speed automatic. A Land Cruiser with a full tank of gas and a driver aboard weighs upward of 6,000 pounds, but the V-8 provides ample acceleration. The only needle that’ll move faster in its instrument cluster is the fuel gauge as it approaches “E.”

Land Cruisers have old-school body-on-frame construction and an independent front suspension paired to a solid rear axle. A trick hydraulic suspension system with massive sway bars prevents it from leaning too much into corners when pushed while providing terrific wheel articulation on bumpy terrain.

Four-wheel drive is standard—of course—and the traction control system has modes for just about any terrain. A nifty feature uses the brakes to shrink the Cruiser’s turning radius on tight trails.

Inside, the Land Cruiser is a blend of UN-tough truck and soft semi-aniline leather. Its button-heavy dash design has throwback appeal. A big infotainment screen with clear maps works well but lacks Apple CarPlay and Android Auto connectivity.

The Land Cruiser isn’t as spacious inside as its big body suggests, but it has ample room in the first two rows. The third row is best for kids and, unfortunately, isn’t easily removable for additional storage.

The Land Cruiser hasn’t been crash-tested, but its active safety gear such as automatic emergency braking and blind-spot monitors is mostly with the times.

The 2019 Toyota Land Cruiser has more curves and chrome than some ‘50s Detroit iron.

The 2019 Toyota Land Cruiser looks like nothing else in its maker’s lineup—unless you count its predecessors. The 2019 Land Cruiser is proud of its curves and its chrome, but much of this SUV’s style is about function over form.

The Land Cruiser’s short front overhang and high bumper give it an excellent approach angle for climbing over obstacles. Its wide chrome grille with a chrome ribbon that cuts through its LED headlights echoes the 1991 model. The Land Cruiser’s side steps are removable, revealing 9.0 inches of ground clearance.

At the rear, the Land Cruiser’s split tailgate flops down for fall football games.

The Land Cruiser’s dash has buttons and knobs scattered about, but they’re mostly grouped by function. A big 9.0-inch touchscreen for infotainment dominates the top of its center stack, with audio and climate buttons running below. The center console is where most of the off-road controls take up residence.

The 2019 Toyota Land Cruiser is ready to go just about anywhere.

The 2019 Toyota Land Cruiser would rather be trundling through the Australian Outback than pulling into the parking lot of the eponymous steakhouse chain.

We rate it at 6 out of 10, giving it points above average for its soft ride and its impressive four-wheeling prowess but deducting one for handling that’s nautical at best. (Read more about how we rate cars.)

The 2019 Land Cruiser accelerates quickly away from a stop and has good passing power thanks to its 5.7-liter V-8. With 381 horsepower and 401 pound-feet on tap, the Land Cruiser’s sole engine choice has enough power to overcome its 5,800-pound curb weight.

We’re not as enamored with its 8-speed automatic, which was added to the lineup in 2016. The transmission shifts well in most situations but is too eager to shift into a higher gear to save fuel—except that its EPA ratings didn’t improve.

The Land Cruiser’s body sits atop a ladder frame. Its solid rear axle and an independent front suspension help it confidently tow up to 8,100 pounds, but they’re not assets when it comes to curvy road prowess.

The Land Cruiser eschews flashy big wheels in favor of off-road-ready 18-inch alloy wheels that pair with a tall sidewall to smother road imperfections. The solid rear axle gives the Cruiser more side-to-side pitch than most SUVs, but its cabin is rarely disturbed by even the roughest terrain.

Over just about any road, the Land Cruiser’s ample ground clearance and stellar full-time four-wheel-drive system provide it with excellent grip even with the street-oriented tires that come standard.

Its list of off-road aids is lengthy. One system uses traction control and ABS to keep the big SUV moving at a snail’s pace. Another grabs the brakes individually to tighten its turning radius for narrow switchbacks.

The Land Cruiser’s nearly 78-inch width prevents it from being a true mountain goat, but it’ll deftly maneuver through deep water, over sand dunes at high speed, and along rutted terrain.

Taking a $86,000 SUV off-road isn’t for the faint of heart, so we tip our collective hat to those who explore the Cruiser’s capability.

Not every seat in the house is first class in the 2019 Toyota Land Cruiser.

The 2019 Toyota Land Cruiser excels in pampering its front and second-row occupants. Row three is compromised, and we wish it could be deleted or easily removed to open up even more cargo space.

We rate the Land Cruiser at 8 out of 10, with points above average for its comfortable front seats, spacious second row, and excellent overall cargo utility. The steerage class third row feels like the afterthought that it is, but we don't peel a point back. (Read more about how we rate cars.)

The 2019 Land Cruiser has 9.0 inches of ground clearance, but its standard side steps ease ingress and egress.

Once aboard, front row passengers have all-day comfortable seats wrapped in the softest leather ever found in a Toyota. The front seats are power-adjustable and feature an automatic heating and cooling system that works well.

The second row is well-padded and has good room for three passengers. Rear-seat entertainment is standard equipment.

The Land Cruiser’s third row is difficult to access for even the most limber. Its rear seats deploy downward when needed and can theoretically hold three passengers—but anyone sitting back there for an extended period should be in a child seat, anyway. Annoyingly, the third row isn’t easily removable.

The Lexus LX 570 comes standard with two rows of seats and we wish Toyota would make the jump seats optional for the Cruiser as well. At least the rearmost seats will keep cool since the Land Cruiser boasts an impressive 28 air vents inside.

Land Cruisers we’ve driven have felt rock solid, but interior materials don’t impress. Soft-touch trim on their dashboards and upper door panels contrasts with UN-grade hard plastics on the center console. For $86,000, the Land Cruiser should be dressier inside—especially since the five-seat LX 570 has real wood trim and few non-padded surfaces for about the same cost.

The 2019 Toyota Land Cruiser has a full suite of active safety tech.

The 2019 Toyota Land Cruiser weighs about 5,800 pounds, which should be an asset if a rhino or an Altima runs into it. However, we can’t assign a score here since it hasn’t been crashed by the NHTSA or the IIHS. (Read more about how we rate cars.)

The Land Cruiser doesn’t offer some of the incremental steps toward self-driving cars seen in some rivals. Features such as limited hands-off driving and active lane control are not available.

The 2019 Toyota Land Cruiser splits the line between rugged and luxurious.

Although it is priced like a luxury vehicle, the 2019 Toyota Land Cruiser lacks some of the high-end features we expect to see. We rate it at 6 out of 10, giving it points for its off-road tech and big infotainment screen but dialing one back because it comes up short on some features. (Read more about how we rate cars.)

Only one 2019 Land Cruiser configuration is available with a single option package. For about $86,500, it’s priced four times what many vehicles parked across the Toyota showroom cost.

For $2,200 the only option package includes a pair of 11.6-inch screens and a DVD player with an HDMI input for the second row.

The biggest hurdle for us is the five-seat Lexus LX 570 that hit the market last year. For about the $1,100 more the Land Cruiser, it has a lavish interior with real wood trim, an air suspension, and a longer warranty.

The 2019 Toyota Land Cruiser can go anywhere, as long as gas stations are close by.

The 2019 Toyota Land Cruiser has a nearly 450-mile range, but that’s because its fuel tank holds almost 25 gallons of regular unleaded.

This is not a fuel-efficient vehicle. We rate the 2019 Land Cruiser at 2 out of 10 on our scale. (Read more about how we rate cars.)

If there’s a silver lining, it’s that the Land Cruiser will cost about the same to drive as the Land Rover Range Rover because the Toyota is rated to run on loss costly regular unleaded gasoline.

Be the first one to write a review on 2019 Toyota Land Cruiser
Rate and Review your car for The Car Connection! Tell us your own ratings for a vehicle you own. Rate your car on Performance, Safety, Features and more.
Write a Review
USED PRICE RANGE
$75,495 - $94,787
Browse Used Listings
in your area
5.4
Overall
Expert Rating
Rating breakdown on a scale of 1 to 10?
Compare the 2019 Toyota Land Cruiser against the competition
Compare All Cars
Looking for a different year of the Toyota Land Cruiser?
Read reviews & get prices
Related Used Listings
Browse used listings in your area