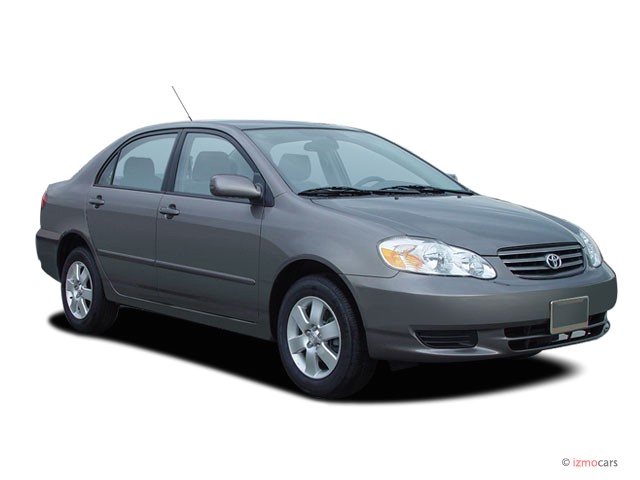 The 2009 Toyota Corolla is already appearing on dealer lots—if you find a 2008 Toyota Corolla you like, you may be able to strike a better deal on it, with the new edition already rolling out nationwide. If you need more cargo space, the Toyota Corolla Matrix is a five-door wagon based on the same running gear.

The 2008 Toyota Corolla may be aging, but it’s aging well—though its engine can sound a little raspy.

Now that the Japanese automaker has added the Yaris to its lineup, the 2008 Toyota Corolla is the second least expensive car in its lineup (not counting the Scion cars). The 2008 Corolla is the last of its kind—Toyota is redesigning the car for the 2009 model year—and in its final year, the Corolla looks pretty much as it’s looked since it emerged in 2003. It’s modern, sober, and substantial, but hardly exciting or youthful. That feeling of sophistication carries to the interior, which is cleanly styled, easy to use, and surprisingly roomy.

A standard 1.8-liter four-cylinder engine makes 126 horsepower in the 2008 Toyota Corolla. It gets a bit rough at higher revs and isn't quiet about its work, but it does deliver 28/37 mpg with the five-speed manual, and 26/35 mpg with a four-speed automatic. The MacPherson strut front and torsion beam rear suspension couldn't be more ordinary in specification, but it's poised, composed, and driver-blunder-resistant. The handling limits are rather low, but the Corollas run smoothly and quietly. Throw in decent front disc/rear drum brakes (anti-lock brakes are optional on the S and LE) and excellent rack-and-pinion steering, and this is as close to a luxury car ride and experience as any small economy sedan has ever. Standard on all cars is a 60/40 folding rear seat and a CD player; all sorts of power options are available, and some versions even have “wood” trim that doesn’t look too bad.

Front-seat side and curtain airbags and anti-lock brakes with Electronic Brakeforce Distribution (EBD) are available as options for all model grades. The 2008 Toyota Corolla gets five star ratings in front crash protection from the NHTSA, along with four stars for side impact when outfitted with side airbags.

The 2008 Toyota Corolla is the mature entry in the compact class.

The 2008 Toyota Corolla will look very familiar to owners of older Corollas. With the Corolla, Toyota has left the styling virtually unchanged since 2003. The mild shape will be replaced in 2009 by a slightly more updated look, but in this model year, the familiar lines left reviewers from around the Web yawning.

Cars.com refers to the Corolla’s “unmemorable” looks. Kelley Blue Book notes that “the styling is subtle but pleasant” for all models and adds that “the sporty S model looks the best of the three trims.” Automobile feels that it “not only feels like a miniature Camry, it looks like one, too.” BusinessWeek is a little rougher; they write that with the Corolla, Toyota tried to “avoid offending anyone rather than to inject a little excitement into an otherwise humdrum day.” Automobile adds that “the supposedly sporty S model sports only side rocker panels and other body addenda of questionable taste.”

Interior styling on the 2008 Toyota Corolla garners similar praise for overall functionality. Kelley Blue Book appreciates that “the radio and heating controls are placed in the center section for ease of use.” Cars.com gives high marks to the ergonomics of the Corolla; Toyota is praised for “controls [that] are logically arranged.” The one and only gripe that reviewers have with the Corolla is that ConsumerGuide finds “the radio is a stretch.” BusinessWeek thinks it’s “well-made but plain.”

TheCarConnection.com’s editors drove the Corolla when it was new in 2003 and again in 2007, just before it was replaced by the new 2009 verison. The 2008 Toyota Corolla is modern, sober, and substantial, but hardly exciting or youthful. That feeling of sophistication carries to the interior, which is cleanly styled, easy to use, and surprisingly roomy.

The 2008 Toyota Camry is no thrill ride, but it handles city driving with sheer competence.

Much like the 2008 Toyota Corolla’s styling, performance won’t leave you breathless, but it is far more than adequate for a compact sedan.

Every trim level of the 2008 Toyota Corolla (three in total: the CE, LE, and S) features the same 126-hp four-cylinder engine that puts power down to the front wheels through either a four-speed automatic or five-speed manual. At first glance, this may give the Corolla the appearance of being underpowered, but Auto123.com points out that “we used to get around fine with 85-hp cars 20 years ago, so 126 ponies is more than enough for city and highway driving.”

However, BusinessWeek calls it “pokey” with the optional automatic transmission, and notes that it’s “much slower” than the Honda Civic, its chief rival. With the Corolla, Toyota’s built a car that’s not engaging to drive, even though “firmer steering, better-damped ride, and bigger brakes” distinguish it from the previous Corolla. Toyota’s engineered in enough performance for the city, but Cars.com reports that “on the highway…the engine's modest power ratings limit the Corolla's performance; the automatic-transmission Corolla I tested only had a minimal amount of power for quick passing.” Car and Driver sums it up: “Just keeping up on the interstate requires a heavy foot — and spurs.”

Handling is nothing remarkable, but the ride is of a better quality than usual among compact cars. Cars.com finds the 2008 Toyota Corolla to be “very maneuverable” and “body roll is effectively controlled when cornering,” but feels that “the ride gets a bit choppy on the highway.” Cornering isn’t its forte: with the Corolla, Toyota has designed a “carefully executed solution to your transportation problem,” Car and Driver suggests. “For recreation, look elsewhere.”

TheCarConnection.com’s experience leads to the same conclusion with the Corolla. Toyota’s MacPherson strut front and torsion beam rear suspension couldn't be more ordinary in specification, but it's poised, composed, and driver-blunder-resistant. The handling limits are rather low, but the Corollas run smoothly and quietly. Throw in decent front disc/rear drum brakes (anti-lock brakes are optional on the S and LE) and excellent rack-and-pinion steering, and this is as close to a luxury car ride and experience as any small economy sedan has ever achieved.

The 2008 Toyota Corolla has high-quality materials for the most part, but the engine drone and the seats aren’t comfortable for everyone.

The 2008 Toyota Corolla maintains its reputation for quality, but comfort—particularly in the driver seat—is an issue.

Reviews read by TheCarConnection.com gave kudos to the interior of the Corolla. Toyota knows how to assemble cars, and Kelley Blue Book raves about the “grade-A quality plastics and a rear seat that can actually accommodate two adults in relative comfort.” Automobile says the 2008 Toyota Corolla has the “fit and finish of a Lexus.” Cars.com complimented the “decent-looking” faux-wood trim, but Car and Driver said it was “enthusiastic in its fakery.”

Some reviewers liked the seats in the Corolla. Toyota’s “cushy seats are covered in a pleasing fabric, and there is ample space for everyone, even in back,” Autos123.com says. In contrast, BusinessWeek states, “The plush inserts in the black cloth upholstery in my test car looked like they were cut out of a terry cloth robe.” Car and Driver dislikes the driving position: “The pedals are close, and the seat cushion rolls off early, as if this chair were designed for short-stature people. Chick car, anyone? The column tilts but doesn't telescope.” BusinessWeek thinks the “rear seats, as you would expect, are cramped, but not overly so.”

The 2008 Toyota Corolla’s 1.8-liter generates quite a bit of noise at highway speeds. Cars.com finds that highway acceleration “brings on a significant amount of engine noise.” ConsumerGuide also reports that “wind and road noise are also marked above 60 mph.”

The 2008 Toyota Corolla gets good crash-test scores from the government and the insurance industry—provided the curtain airbags are ordered.

The 2008 Toyota Corolla fares well in government crash tests and scored five stars in both driver and passenger side front impact tests with the National Highway Traffic Safety Administration (NHTSA). Side-impact scores were slightly lower, as the Corolla earned four out of five stars on both sides. However, Cars.com is quick to point out the IIHS tested Corollas both with and without side-curtain airbags, and “without those $655 airbags, the Corolla’s overall side-impact score drops to Poor.”

In the 2008 edition of the Corolla, Toyota offers a respectable number of safety features that are mostly par for the course for its segment. Front-seat side and curtain airbags and anti-lock brakes with Electronic Brakeforce Distribution (EBD) are available as options for all model grades.

Used Toyota Corolla for sale near

The 2008 Toyota Corolla has fewer standard features and lacks some newly available options.

The 2008 Toyota Corolla comes in three trim levels with varying degrees of standard and optional features.

There’s a decent amount of standard equipment in the base CE version of the Corolla; Toyota installs such features as a four-speaker AM/FM/CD sound system, air conditioning, and power mirrors and tilt steering wheel. Autospectator.com feels that with these standard features in the Corolla, “Toyota eliminated the traditional notion of a ‘base’ model.” Moving up the trim levels brings some minor exterior additions and some chrome trim on the S. The top-end LE adds even more, and Cars.com applauds the car’s “power windows, keyless entry and vibrant electroluminescent gauges that are easy to read.”

BusinessWeek notes that some high-end options aren’t available, including leather. A navigation system is also not present, nor is Bluetooth connectivity. “Cruise control, a moonroof and a JBL audio system with an in-dash six-CD changer are optional,” Cars.com notes.

1 Review
5 star
100%
4 star
3 star
2 star
1 star
Rate and Review your car for The Car Connection! Tell us your own ratings for a vehicle you own. Rate your car on Performance, Safety, Features and more.
Write a Review
For 2008 Toyota Corolla