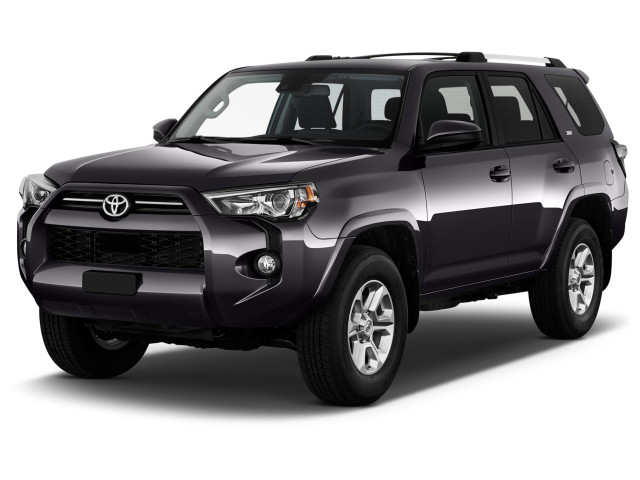 The 2020 Toyota 4Runner is a solid choice for weekend warriors made better this year thanks to more safety gear, but pavement-pounders should look elsewhere.

The 2020 Toyota 4Runner is an SUV that may owe its continued existence to the way the “Jurassic Park” franchise reignited an interest in dinosaurs.

The 4Runner’s basic, off-road design makes it a relic compared to car-like crossover SUVs. Beneath its bulky exterior, the 4Runner has a separate frame and a solid rear axle, heavy-metal bits typically associated with pickup trucks. Those rugged parts give the 4Runner serious off-roading capability, especially in TRD Off Road and TRD Pro configurations. The 4Runner SR5 gets the basics right, while the decked-out 4Runner Limited seems to miss the point, at least to us.

This year, the 4Runner gets a needed infusion of collision-avoidance tech including automatic emergency braking and adaptive cruise control. Its infotainment system now features Apple CarPlay and Android Auto compatibility. That new gear turns the 4Runner into a dinosaur with a flip phone, but that’s an upgrade over last year’s two cans and a string.

Underhood, the 4Runner has a 4.0-liter V-6 rated at 270 horsepower and 278 pound-feet of torque. A 5-speed automatic transmission sends power to the wheels. Rear-wheel drive is standard, but the 4Runner makes more sense with the optional four-wheel-drive system. The 4Runner is heavy and rides on big tires that give it unstoppable performance off-road but can leave it with ponderous handling on pavement. Opt for the 4Runner TRD Off Road and the truck can be equipped with trick, hydraulically actuated sway bars that reduce lean in curves while aiding suspension droop off-road to keep the wheels on terra firma. The 4Runner TRD Pro discards that setup for Fox dual-reservoir shocks and a 2.5-inch suspension lift that gives it a plush ride and serious capability. On the highway, the 4Runner’s steering is nervous, though this year’s newly standard adaptive cruise control should make it a more relaxing road-tripper.

Step up into the 4Runner—hiking boots help—and you’ll find big, soft seats and a chunky dashboard. The seats sit low to the ground and head room isn’t extravagant. The optional third-row seat feels like an afterthought. Cargo is treated to around 90 cubic feet of space with the rear seats folded, but don’t look for a power liftgate.

No 4Runner is inexpensive, but both TRD versions are less expensive and better equipped for daily driver use than similar Jeep Wranglers.

The 2020 Toyota 4Runner has old-school styling that has aged well.

With its sharp front end, the 2020 Toyota 4Runner is an attention-grabber. We rate it at 6 out of 10, with a point above average for its ability to stand out in a crowd.

The 2020 4Runner has a blocky profile that’s a page out of the history books. It sits high off the ground and rides on tires nearly as tall as the roof of some sports cars. The 4Runner’s front end has big air intakes and sharp headlights that dig deep into its flared fenders. This year, the grille design is tweaked to house sensors for the automatic emergency braking and adaptive cruise control systems, but you’ll have to look closely to spot the differences. At the rear, the 4Runner’s styling isn’t as cohesive. Its tailgate is bland and isn’t integrated into the rest of the truck’s design.

Inside, the SUVs have a blocky dashboard that puts an 8.0-inch touchscreen up high. Enormous audio and climate control knobs are comically overwrought. Tough cloth seats come standard, but many 4Runners on dealer lots are upholstered in easy-to-clean synthetic or real leather trim.

The 2020 Toyota 4Runner won’t make you yearn for a curvy road, but it can be reasonably polished in certain configurations.

Shop carefully as the 2020 Toyota 4Runner has a different personality depending on what’s underneath. We rate the entire lineup at 5 out of 10, dialing a point back for sloppy handling that we add back for its serious off-road chops in most trims.

All 4Runners use a 4.0-liter V-6 rated at 270 hp and 278 lb-ft of torque. The engine is paired to a 5-speed automatic transmission that’s down three gears to most competitors. 4Runner SR5 and Limited trims come standard with rear-wheel drive and a part-time four-wheel-drive system is optional on SR5 and standard with either TRD trim. Only the 4Runner Limited offers a four-wheel-drive system that can be used on dry pavement.

These SUVs ride on big tires and have a lot of ground clearance, so it’s not surprising that they can be a handful on pavement. Most versions bounce softy over big bumps and have light steering that requires extra corrections at speed. Their brakes are plenty strong, but suffer from numb pedal feel.

Any version is decently capable at taming a dirt road, though TRD 4Runners offer more confidence thanks to some impressive four-wheeling gear. The TRD Off Road adds a locking rear differential, a knob that tailors the traction control system to different conditions such as mud or rocks, and an off-road cruise control system that can lope the SUV along at a snail’s pace over serious moguls. The crawl control system is effective but incredibly loud. We recommend the optional Kinetic Dynamic Suspension System on the 4Runner TRD Off Road, which consists of thicker, hydraulically actuated sway bars that reduce lean on pavement and increase wheel travel off-road. The suspension doesn’t transform the 4Runner, but it helps quell the sloppy standard suspension.

Opt for the 4Runner TRD Pro and Toyota slaps a lifted suspension underneath paired to Fox shocks that give it a plush ride on or away from pavement. For most users, the suspension is probably overkill, though its ride quality is remarkably compliant. The 4Runner Limited goes in the opposite direction with its 20-inch wheels and relatively short tire sidewalls that give it a stiff ride. Off-roady SUVs with big wheels don’t make much sense to us.

The 2020 Toyota 4Runner is spacious, but not all that comfortable inside.

The 2020 Toyota 4Runner has a relatively short cabin with a high floor and a low roof. It’s not ideal for passengers, though its big footprint means there’s plenty of space inside for gear.

We rate it at 5 out of 10, dialing a point back for an interior that’s a chore to climb into but adding one for good cargo utility.

The 4Runner’s front seats are large and plush. Drivers and front-seat passengers sit with their legs out, rather than the chairlike upright position more common in SUVs. The rear seat has decent space for outboard passengers but the middle position is tight. A cramped third row of seats is optional on some trim levels, although we’d look at other vehicles if hauling more than four passengers is a priority. Head room is acceptable in every seat, but not generous with the optional sunroof. High window sills and beefy roof pillars mean outward vision is not great.

The 4Runner doesn’t offer a power tailgate like many competitors, but its rear window slides down at the touch of a button. Cargo space is good at around 48 cubic feet with the second-row seat upright and nearly 90 cubes with it folded. There’s just 9 cubic feet behind the optional third row, however.

To make up for the 4Runner’s high cargo floor, Toyota offers a handy slide-out floor as an option on 4Runner SUVs without the third row.

Even in Limited trim, the 4Runner is not especially luxurious inside. The standard cloth upholstery has a durable, tough feel. The optional synthetic and real leather trim is a good choice for those bound to get their SUVs dirty because it’ll be easier to clean.

The 2020 Toyota 4Runner now comes standard with a full suite of active safety tech including automatic emergency braking, adaptive cruise control, and blind-spot monitors. That’s enough for a point above average, but it loses points for unimpressive federal and independent crash tests. It’s a 4 out of 10 on our scale.

The NHTSA rated the 4Runner at four out of five stars overall, including four stars for frontal crash, five for side-impact crashes, and three stars in the calculated rollover evaluation.

The IIHS agrees. The 4Runner earned “Good” scores in many crash tests, but the “Marginal” in the driver-side small-overlap test that simulates impact with an object such as an oncoming car or a utility pole is concerning. The 4Runner’s headlights rated “Poor” in the IIHS’ testing, too.

New Toyota 4Runner for sale near

The 2020 Toyota 4Runner is expensive, but few rivals can match its off-road gear.

Four trim levels and a handful of packages mean there’s a 2020 Toyota 4Runner for just about every need. For us, the off-road versions capture the 2020 4Runner’s spirit best. Overall, we rate the lineup at 7 out of 10 thanks to its upgraded infotainment and its decent standard feature set.

The base 4Runner SR5 costs around $36,000 with rear-wheel drive, $38,000 with four-wheel drive, and gets the basics down with standard active safety tech, an 8.0-inch touchscreen for infotainment that now comes with Apple CarPlay and Android Auto compatibility, and power features. The SR5 Premium adds a power moonroof, synthetic leather seats that are heated up front, and a few other features for about $1,800

We think the 4Runner TRD Off Road is worth the $3,000 bump over the SR5. It builds on the SR5 with a locking rear differential, off-road cruise control, driving modes for four-wheeling. As on the SR5, the optional Premium package drapes the seats in synthetic leather and adds a power moonroof. A better bet is the Kinetic Dynamic Suspension System, which Toyota bundles with navigation for about $1,600.

Skip the 4Runner Limited, we say. Its big wheels and chrome-laden dashboard are at odds with the truck’s rugged nature. For a similar price, the 4Runner TRD Pro goes whole hog with Fox shocks, a suspension lift, all-terrain tires with lightweight wheels, a beefy roof rack, and additional underbody protection. It’s a pricey off-roader at $50,000, but adding that kit to a 4Runner SR5 via the aftermarket would cost way more than what Toyota charges—and the 4Runner TRD Pro comes with a full warranty, while whatever you’ve bolted on in your driveway lacks the same safety net.

You didn’t expect a boxy SUV like the 2020 Toyota 4Runner to be thrifty, did you?

Most 4Runners are four-wheel drive and they’re rated at 16 mpg city, 19 highway, 17 combined regardless of trim level. Rear-drive versions get the same EPA rating.

Even the boxy Jeep Wrangler is thriftier. It’s rated as high as 24 mpg with a turbo-4 mild-hybrid powertrain.

Be the first one to write a review on 2020 Toyota 4Runner
Rate and Review your car for The Car Connection! Tell us your own ratings for a vehicle you own. Rate your car on Performance, Safety, Features and more.
Write a Review
$36,120
MSRP based on SR5 2WD
Change Style

Drivetrain
Trim
See Your Price For 2021
5.0
Overall
Expert Rating
Rating breakdown on a scale of 1 to 10?
Compare the 2020 Toyota 4Runner against the competition
Compare All Cars
Looking for a different year of the Toyota 4Runner?
Read reviews & get prices
Related Used Listings
Browse used listings in your area