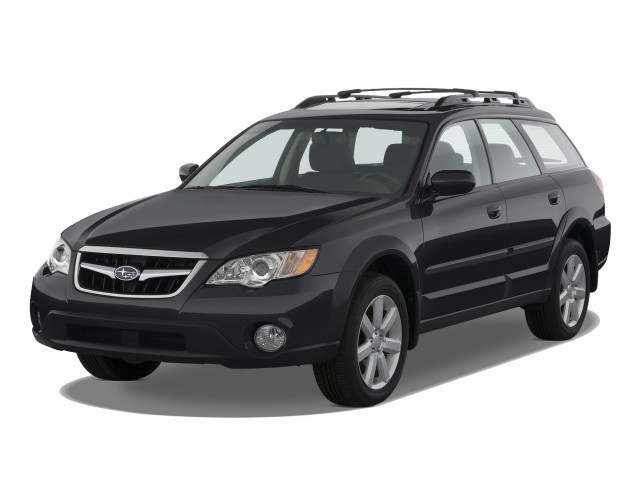 Watch the bottom-line price on the Outback, as top-of-the-line 3.0R models can quickly approach luxury-brand prices; the best value is at the bottom of the price list.

The 2009 Subaru Legacy Outback boasts more toughness than most wagons and is a good, practical alternative to tall, ungainly SUVs.

Experts at TheCarConnection.com know that your next car-buying decision is sure to be an important one. For this reason, editors have scoured the Web to bring you highlights of some of the Web's most thorough reviews of the 2009 Subaru Legacy Outback. Editors also include their own driving opinions, along with their no-nonsense Bottom Line take, so that you can make the best decision possible.

The 2009 Subaru Outback lineup includes several versions, including a wagon body style. All receive the rugged treatment, picking up a raised heavy-duty suspension and body-side cladding that hints at greater brawn. The Outback is otherwise mechanically similar to the Legacy sedan, which is covered by a separate review.

The Outback is offered in a wide range of models, now ranging from the basic 2.5i up to the sporty XT Limited and luxurious 3.0R Limited. The 2.5i and 2.5i Limited models get a 168-horsepower, 2.5-liter horizontally opposed ("flat") four, while the 2.5 XT and XT Limited upgrade to a high-performance turbocharged 2.5-liter flat-four making 243 hp. And at the top there's a 245-hp, 3.0-liter flat-six powering the 3.0R.

With the base engine, the 2009 Subaru Outback has adequate power with a light load, but if you plan on hauling a lot of stuff or driving in the mountains, the engine can feel taxed. It's made worse by the four-speed automatic, which can shift abruptly and has rather widely spaced gears. The turbocharged engine in the XT is the most responsive, with none of the lag that sometimes plagues turbos, but the six is the smoothest and most refined.

Models with the turbocharged four or the six-cylinder engine get SI-Drive, a system that has three different modes allowing throttle response, transmission shift, and other characteristics to change from smooth to sharp as desired in the 2009 Subaru Outback.

Despite having the heavy-duty suspension, Outback models handle very well on the road, with crisp, rather communicative steering and not much body lean; ride comfort is quite good as well, but road noise can be an issue inside.

Overall, the interior is rather basic but attractive with matte-metallic materials and mid-grade plastics. There are no overt luxury pretenses here, except in the top models, which pile on the convenience features and upgrades. Seating in the 2009 Subaru Outback is comfortable for five normal-sized adults, though front-seat occupants might find headroom tight with the available moonroof. A 440-watt Harman-Kardon premium audio system is standard across the line for 2009.

Anti-lock brakes, front-seat side airbags, and active front head restraints are all included. For 2009, Subaru's electronic stability system is standard across the line. The Subaru Outback receives top five-star results from the federal government in both frontal and side impact tests.

The 2009 Subaru Legacy Outback is a good-looking vehicle inside and out.

Most agree that the 2009 Subaru Legacy Outback is a good-looking vehicle overall—even though its fundamental design hasn't changed in many years.

Cars.com reports that there were a few updates in 2008, "most notably a new bumper and a restyled grille...higher trim levels of the Outback lose their two-tone paint scheme for a monotone bumper with gray cladding at its lower edges." Although Edmunds says the 2009 Subaru Outback has "dropped the awkward SUV styling cues of yesteryear and now embraces its midsize wagon body," Kelley Blue Book notes that despite its "wedge-shaped profile...its SUV-like attributes are subtle but noticeable." However, this source praises the way its "aerodynamic ground-effects components blend with more pronounced wheel arches to give it a bolder stance."

As reported by Edmunds, the interior of the 2009 Subaru Legacy Outback is defined by "simple controls, tasteful faux wood and aluminum accents" that give this Subaru 2009 interior "an uncluttered and classy ambience." Kelley Blue Book provides more detail: "two-toned interiors are fitted with cloth upholstery on [2009 Subaru Outback] Basic, 2.5i and 2.5i L.L. Bean trims, while the 2.5 XT Limited and 3.0 R L.L. Bean Editions receive leather trim...dashboard and control layout convey a down-to-business personality."

The 2009 Subaru Legacy Outback is fairly good performer and hits most of the right notes.

According to a wide range of reviews, the 2009 Subaru Legacy Outback does a good job of feeling sporty and athletic while remaining quite comfortable overall.

With the base engine, the 2009 Subaru Outback has adequate power with a light load, but if you plan on hauling a lot of stuff or driving in the mountains, the engine can feel taxed. ConsumerGuide says "non-turbocharged 4-cylinder models have enough power for most driving, but lack reserve muscle for passing and merging." The turbocharged engine in the XT is the most responsive, with none of the lag that sometimes plagues turbos, but the six is the smoothest and most refined. ConsumerGuide notes that "turbocharged 243-hp 4-cylinder models provide good power—7.8 seconds 0-60 mph in our tests." However, with these Subaru 2009 models, "throttle response is dulled by annoying turbo lag."

Subaru models with the base engine have either a five-speed manual or four-speed automatic transmission, while XT models have either a six-speed manual or five-speed automatic, which comes with Sportshift paddle shifters. At the top, the six-cylinder engine comes with just the five-speed automatic. ConsumerGuide reports that "some find the manual transmission to have imprecise, overly long shift action," while Edmunds complains the "automatic transmissions still leave much to be desired, as they sap power by upshifting too early." Cars.com states that "manual or automatic transmissions are available for the regular and turbocharged four-cylinders," and observes this Subaru 2009 transmission "could use a fifth gear; in many cases you can press the gas pedal halfway down without inducing a downshift, which doesn't help your passing confidence." Across the line, the Outback models get all-wheel drive and have up to 8.7 inches of ground clearance, which may prove very useful in deep snow or mud.

Models with the turbocharged four or the six-cylinder engine get SI-Drive, a system that has three different modes that allow throttle response, transmission shift, and other characteristics to change from smooth to sharp as desired in the 2009 Subaru Outback. SI-Drive works by "mapping accelerator response and shift points according to three settings," Cars.com reports. "Subaru says Intelligent mode yields up to a 10 percent increase in gas mileage."

Despite having the heavy-duty suspension, Outback models handle very well on the road, with crisp, rather communicative steering and not much body lean; ride comfort is quite good as well, but road noise can be an issue inside. ConsumerGuide reports "all Outbacks have linear, predictable steering...[and] brakes feel strong on all." According to Edmunds, "firm suspension tuning along with responsive steering and the grip afforded by the all-wheel-drive system give the Outback a nimble feel through the turns while still providing a comfy highway ride," while Kelley Blue Book comments that "ride comfort leads the 2009 Subaru Legacy Outback's list of benefits," though "on rougher surfaces...the suspension tries its best to maintain a level attitude but some occupant-tossing may occur." "The low center of gravity helps quell roll motions and reduce that tippy sensation you often get in heavy SUVs," asserts Car and Driver, adding, "thanks to a steering rack bolted securely to the front suspension subframe, the Outback has very direct responses to the helm."

The 2009 Subaru Outback is fairly well appointed and well built, but it doesn't have the luxurious feel of some competitors.

Experts at TheCarConnection.com find that the 2009 Subaru Legacy Outback lags behind some competitors in terms of overall luxury, but it's no slouch.

ConsumerGuide reports "plenty of legroom, but headroom is tight for taller riders," and [rear] foot space is cramped, even with the front seats raised." Edmunds says 2009 Subaru Outback "seat comfort is generally good, though adults may find the backseat tight on legroom and shoulder room compared to roomier wagons and crossovers." Cars.com contends that "as midsize cars go, the Outback's five-seat cabin feels intimate...total passenger volume ranges from 93 to 98 cubic feet, depending on whether you have a moonroof." According to ForbesAutos, "two adults will find the Outback Wagon adequately roomy up front, with up to three of all but the tallest riders accommodated in the rear."

Edmunds reports that "with the rear seats up there is 33.5 cubic feet of cargo capacity...flip them down and 66 cubic feet are available." Storage space appears to be a disappointment in this 2009 Subaru; ConsumerGuide says "these wagons have low liftover but no opening glass," and "interior small-item storage [is] lacking, disappointing for an 'active lifestyle' vehicle."

According to Car and Driver, the 2009 Subaru Legacy Outback "interior is of fairly high quality compared with that of similarly priced cars, especially on the less expensive models." ConsumerGuide's verdict: "Assembly quality has been good on models tested. With revamped interior, materials are class appropriate, though nothing special given Subaru's near-premium pricing." Cars.com says "heated seat controls have a rickety feel, and the doors lack window frames, so they don't shut with as much heft as I've come to expect in a midsize car."

ConsumerGuide also notes that while "turbocharged and 6-cylinder engines are subdued and refined...some testers complain of body drumming over broken pavement," and "a fair amount of road and wind noise filters into the cabin at highway speeds."

The 2009 Subaru Legacy Outback is consistently noted as one of the safest in its class.

The Insurance Institute for Highway Safety (IIHS) gives the Outback its highest rating of "good" on all tests. The National Highway Traffic Safety Administration (NHTSA) grants the Outback a five-star rating for front and rear seat front and side protection, and four stars for rollover protection.

Edmunds notes that "anti-whiplash front head restraints are standard on every 2009 Subaru Outback." Electronic stability control is also standard across the line. Cars.com reports that "standard equipment includes four-wheel-disc antilock brakes, side-impact airbags for the front seats and side curtain airbags for both rows."

Used Subaru Outback for sale near

The 2009 Subaru Legacy Outback lacks some features that buyers have come to expect.

The 2009 Subaru Legacy Outback doesn't have an especially long—or robust—feature set; even though all-wheel drive is standard, there's still a lot of room for improvement inside.

The 3.0R Limited model can be lavishly equipped, yet prices will top $35,000 with a few options. And still, these vehicles are without Bluetooth, standard satellite radio, or iPod connectivity, features that are becoming commonplace in vehicles costing far less.

1 Review
5 star
4 star
100%
3 star
2 star
1 star
Rate and Review your car for The Car Connection! Tell us your own ratings for a vehicle you own. Rate your car on Performance, Safety, Features and more.
Write a Review
2009 Subaru Outback 4-Door H4 Automatic Ltd PZEV

Great package overall, great pick as a used car when you know what to look for.