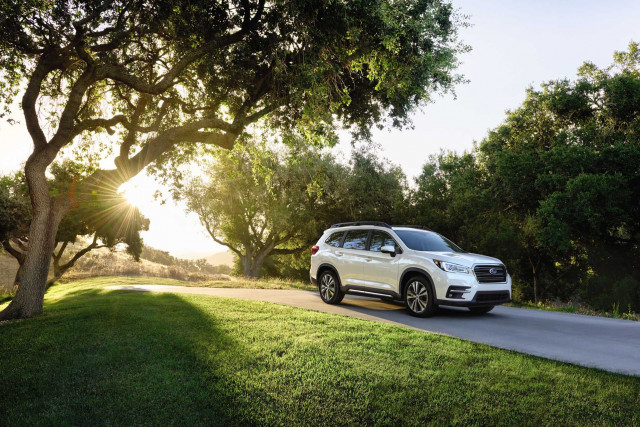 With newly adaptive headlights, the best 2021 Ascent value is toward the basecamp of trim levels. We’d stick with Premium or Limited.

The 2021 Subaru Ascent scales the mountain of family needs for a three-row crossover.

The 2021 Subaru Ascent soldiers into the new year with minimal changes on what’s been a reliable formula so far. The new Ascent gets adaptive headlights as standard equipment and an upgraded safety suite to complement good standard features. It earns a 6.7 TCC Rating. (Read more about how we rate cars.)

Although the Ascent hits the trails with verve, its body stays right down mainstream for most three-row crossovers and Subaru’s look. It’s a familiar affair from head to toe: it looks like an Outback big-and-tall in all the right ways, or a calorific Forester—you pick.

Inside, there are seats for up to eight, although a seven-seat configuration with two captain’s chairs in the middle row is our favorite. The Ascent is fairly unadorned inside except for functional flourishes such as wide openings, up to a half-dozen USB ports, or 19 cupholders.

Under the hood is a turbo flat-4 that makes 260 horsepower teamed to a continuously variable automatic transmission (CVT) and all-wheel drive. The Ascent has plenty of off-road prowess, but it’s on-road manners are more endearing. The EPA pegs the Ascent right in the middle among three-row crossovers at 23 mpg combined, although pressing the turbo into duty can sink mileage for the heavy crossover.

The Ascent is Subaru’s biggest crossover, and most comfortable. With seats for up to eight with room in the back for gear, the three-row crossover excels at convenience. Rear seat riders get more than 38 inches of leg room and the third row is suitable for adults, too.

This year, the Ascent adds a more sophisticated active safety suite on all models: uprated headlights favored by the IIHS are newly standard, and a rear-seat reminder assists busy parents.

Starting from $33,345, the Ascent makes sense for families upgrading to a bigger canoe. We see the best value in the Ascent Premium, which costs $35,845 and adds an 8.0-inch touchscreen, cloth upholstery, and 2.4 beverage possibilities for up to eight passengers.

Despite its pedigree, the 2021 Ascent doesn’t venture far off Subaru’s style path.

Bigger than an Outback, looking like a Forester, the 2021 Ascent slots into Subaru’s stock like a day trade. It’s handsome, even if it’s nothing new. It’s a 5 for style.

The Ascent’s gifted with good pedigree—most Subarus have big, bright interiors thanks to large windows and low beltlines. The Ascent’s grille is cribbed from the Outback; aside from a taller snout and horizontal elements in the lower front bumper, practically everything else is too.

Along the body sides, the Ascent looks like an embiggened Outback. That’s a word. Probably.

The Ascent borrows high-mounted taillights from the Forester’s playbook, which is a small nod to the other boxy crossover in the automaker’s portfolio.

Inside, the Ascent prefers form over function with big vents, an asymmetrical dash that’s skewed slightly toward the driver, and stretch-out space. There are plenty of cubbies and holders inside—a boon for practicality, but perhaps not style.

TL;DR? The Ascent is OK, and it’s geared more for purpose than pretense. Just like every other Subaru we’ve seen for the last 20 years.

Eschewing V-6 power or even more than one available powertrain, the Subaru Ascent is relatively alone in its simplicity. Every Ascent is powered by a 2.4-liter turbo flat-4 that makes 260 hp and powers all four wheels via a CVT. Its smooth ride is more important, and it’s how the Ascent earns a 6 on our scale.

Although it’s tasked with moving more than two tons of family crossover, the busy 2.4-liter flat-4 has enough grunt to make passing moves and lug up to 5,000 pounds behind it. It’s not the most refined engine in any crossover, but it gets the job done. Around town, it settles into a comfortable lope and returns more than 20 mpg combined with a light right foot. (Tapping into the turbo saps gas mileage, however.)

Tackling tough terrain or endless weekend to-do lists are equally in the Ascent’s wheelhouse. Its 8.7 inches of ground clearance is complemented by a tight 38-foot steering circle and feather-light steering. It’s easily parkable and maneuverable, useful for trails or strip malls alike.

The Ascent tracks easily down the highway and settles into a comfortable cruise, even on the tall 20-inch wheels on Limited and Touring models.

Like most Subarus, the Ascent easily scrambles up trails and snowy canyons with ease. The standard all-wheel-drive system can shuttle its power front to back quickly, although there’s no front-drive-only Ascent. It’s better with all-wheel drive and its fuel economy isn’t significantly penalized.

The cavernous interior of the Ascent is a boon to families and bigger households. Like the Outback, the Ascent promises room for people and gear, and capability to shuttle the bunch to the next trailhead. Unlike the Outback, the Ascent has three rows of seats for up to eight riders—and 19 cupholders for 2.4 beverages per person. It’s a 9 on our comfort scale thanks to its spacious first and second rows, good cargo area, and people (and beverage) hauling skills.

The front two seats are all-day comfortable with plenty of adjustment and durable cloth or leather upholstery. Every Ascent above the base version has an eight-way power-adjustable driver’s seat, and Ascent Limited and Touring models have a four-way power-adjustable front passenger’s seat—but none offer height adjustability, which we think is an oversight.

In row two, rear passengers get 39 inches of leg room, which is plenty for long legs. Captain’s chairs can swap in on Limited and Touring models for no cost; they’re available on Ascent Premium as part of a package that adds about $1,500 to the overall cost but includes a power liftgate and keyless ignition.

The third row is easily accessible and suitable for small adults for a long while, or long adults for a small while. By the numbers, there are 31.7 inches of leg room, which is more than abbreviated third rows in small crossovers, but down a couple of inches to big three-rows such as the Volkswagen Atlas.

Behind the third row, there are 18 cubic feet available for gear, which expands to 47 cubes with the third row folded forward. With row two out of the way, the Ascent holds 86 cubic feet of gear—plenty for an REI super sweep or three.

The Ascent offers not only 19 cupholders (although some of them are bottle holders, not Big Gulp-regulation size) but up to six USB chargers.

We wouldn’t blink at grinding dirt into the Ascent’s cloth or leather upholstery—they feel hard-wearing and durable regardless of what’s inside.

Better safety equipment this year complements great crash-test scores. The 2021 Ascent misses a perfect score on our safety scale due to its size: big cars have big pillars that get in the way of outward vision.

Federal testers gave last year’s Ascent a five-star overall score for crash safety, and a four-star score in the calculated rollover test, which is common for tall-riding vehicles.

The IIHS calls the Ascent a Top Safety Pick+ and it earned a top “Superior” rating for front crash prevention.

New this year is active lane control and adaptive cruise control on all models, and a rear-seat reminder to notify drivers to check the back seats before exiting the Ascent.

New Subaru Ascent for sale near

The 2021 Ascent doesn’t skip many features sought by families.

Subaru bakes in plenty of sweet features into the 2021 Ascent, including newly standard safety equipment and smartphone software. The base models go lite on a touchscreen, however, which keeps it from scoring higher on our scale. We give the Ascent points above average for good base features and value. It’s a 7.

Like last year, the Ascent is available in base, Premium, Limited, and Touring trim levels that start at $33,345, including destination charges. That includes three rows of seats, cloth upholstery, active safety equipment (that we cover above), 18-inch wheels, three zones for climate control, and a 6.5-inch infotainment touchscreen with Apple CarPlay, Android Auto, and Bluetooth compatibility.

We’d step up to an Ascent Premium that adds a power-adjustable driver’s seat, heated front row seats, blind-spot monitors, a leather-wrapped steering wheel, and an 8.0-inch touchscreen for infotainment. At $35,845 with a three-person second-row bench, or $37,305 with second-row captain’s chairs (and a power liftgate), it makes the most sense for family buyers.

The Ascent Touring climbs the hills in style. At $46,495, it adds leather upholstery, 20-inch wheels, Harman Kardon audio, cooled front seats, woodgrain trim, and a panoramic sunroof. Captain’s chairs are standard on Ascent Touring—it’s a nice place to be, provided you don’t have many small children.

The Ascent keeps pace with its class when driven with a light foot.

The 2021 Subaru Ascent posts respectable gas-mileage numbers for a big people-mover on paper. In the real world, it pays to be patient.

Bigger wheels on Limited and Touring models dent gas mileage by 1 mpg across the board. Both figures are for all-wheel-drive models, which is standard across the Ascent lineup.

Unlike the Telluride, Pilot, and others, the Ascent uses a small-displacement engine that’s turbocharged. Accelerating quickly or long-distance drives at high speeds can sap fuel economy in a hurry in the Ascent.

Be the first one to write a review on 2021 Subaru Ascent
Rate and Review your car for The Car Connection! Tell us your own ratings for a vehicle you own. Rate your car on Performance, Safety, Features and more.
Write a Review
$32,295
MSRP based on 8-Passenger
Change Style

Trim
Other
See Your Price For 2022
6.7
Overall
Expert Rating
Rating breakdown on a scale of 1 to 10?
Compare the 2021 Subaru Ascent against the competition
Compare All Cars
Looking for a different year of the Subaru Ascent?
Read reviews & get prices
Related Used Listings
Browse used listings in your area
See More Used
The Car Connection Daily Headlines