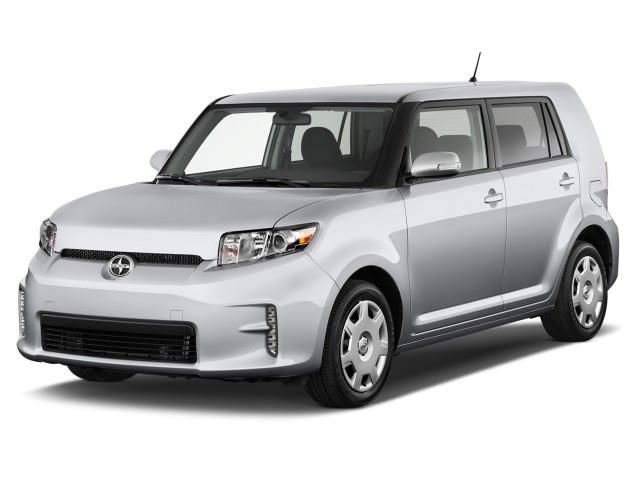 Go over the full range of possibilities for the 2014 Scion xB, as some of the dealer-installed accessories' cost can often be wrapped into your new-vehicle financing.

The 2014 Scion xB might not be as trendy -- or sensible -- as it tries to be, but it fits a lot of cabin space into a compact footprint.

What the 2014 Scion xB has is niche appeal. as well as a certain kind of charm that those in close urban areas might really appreciate. With decent space and versatility, all in a compact-car parking footprint, there's a lot of promise—and a lot of flair and attitude—in its 'box on wheels' concept.

Yet for a number of reasons, Scion's grab for the mass market hasn't been the hit the brand had hoped—and rival efforts like the Kia Soul have instead grabbed the spotlight. Scion was here first, with a smaller, uber-boxy xB that gained a cult following for its fresh take on what a small car could be; then Scion rethought (or overthought, we'd say) the xB for 2008 and cast it as something of a follow-up on now-obsolete retro-futuristic models like the Chrysler PT Cruiser and Chevy HHR, with puzzling functionality choices inside like tiny, centrally mounted gauges. In recent years Scion has merely carried over the xB instead of fixing some of those obvious market turnoffs—opting instead for a few special editions. The blunt front end now has a glossy-black lower grille while an available black rear diffuser, chrome accents, and LED accent lighting can help jazz up the look.

The same 158-horsepower, 2.4-liter four-cylinder engine that's powered versions of the Camry and RAV4 does well enough here, but it's not as inspired as you might think as the xB weighs more than 3,000 pounds. The front strut and rear torsion-beam suspension, combined with good electric power steering, give it a crisp, maneuverable feeling around town, but at speed the stock-tune xB feels clumsy in any quick maneuvers. Ride comfort is okay around town but it can get pitchy on the highway. Fuel economy ratings are just 22 mpg city, 28 highway—the biggest disappointment of all, we think.

Once you've seen how the seats fold down, you might also be disappointed at how much cargo space is actually there. The front passenger seat folds flat, though, and the second-row seat has enough room for adults, a big failing of the first-generation xB. But the seats themselves aren't comfortable enough in front for longer trips.

Customization and personalization—and a no-haggle base price—remain a big part of the xB's appeal. If you can stay away from the seemingly endless chances for dealer-installed accessories and upgrades, you'll get one of the best deals on the market for those who want a relatively well-equipped, van-like vehicle but don't have high demands for driving dynamics or behind-the-wheel thrills. This year it gets better, too, with a nearly standard Display Audio system that includes a 6.1-inch touch screen, with six speakers, Bluetooth and HD Radio technology, a USB port, and an auxiliary audio jack.

On one hand, Scion has managed to inject a lot of flair and attitude into its 'box on wheels' concept; yet on the other hand, the xB is an odd outlier than doesn't quite deliver on the space efficiency it hints from the outside.

There's more to this story than what it might first appear. Scion had a cult following on its hands with the pre-2008 Scion xB, a subcompact vehicle that was, simply put, boxy to the max—with crisp edges and a look unlike any other on the market. Scion thought that it could turn the xB into a full-fledged mass-market hit, so it made the xB a size larger and loaded it with a different kind of retro design sensibility that characterized the likes of the Chrysler PT Cruiser and Chevy HHR—both models that have been obsolete now for years.

Although the xB still builds intrigue today, it's arguable that it looks more like a soft-cornered armored van, or bread van, with the high haunches, thick waist, wide rear pillar, and long, flat roof. The blunt front end now has a glossy-black lower grille, and there are a few other exterior changes geared toward making the xB look a little sportier—including LED accent lighting and a black rear diffuser.

Review continues below
Is the xB's interior functionally stylish or a complete fashion victim? Among our editorial team we tend to think the latter, but you should take a look at interior pictures and decide for yourself. The design is straightforward, fundamentally, with an upright dash and a straight-across shelf, yet a mishmash of perplexing details—like the small analog gauges placed toward the center, at a distance, as well as cluttered controls—detract from its functionality...and its coherence.
7

The 2014 Scion xB performs adequately, although it's not particularly quick or nimble.

The 2014 Scion xB is pitched toward younger, urban dwellers; yet it doesn't have the perky, responsive feel you might expect from such a vehicle. Instead it's a more mature, merely adequate (and unexciting) driving experience.

The 158-horsepower, 2.4-liter four-cylinder engine that powers the xB has been used in a number of other Toyota vehicles, including the Camry. It's plenty for the Camry yet it somehow manages to feel a little sluggish in the xB.

A five-speed manual gearbox is the base setup, and we prefer it for the nicely weighted shift lever and progressive clutch uptake. The four-speed automatic has big gaps between gear ratios, which makes highway driving more noisy and less satisfying.

As for how the xB rides and handles (and this can vary widely depending on which dealer-installed accessories you've chosen, by the way), we tend to think of the xB as having two different personalities, depending on the speed. At city speeds, the xB's rather short wheelbase and responsive electric power steering are assets, and it feels quite confident. Yet with the standard calibration for this front strut, rear torsion-beam suspension tuned quite soft, the xB can feel clumsier in faster maneuvers. Add in the strong disc brakes, and you have a vehicle that is missing excitement but is safe and confident.

A space-robbing seat layout is partly to blame for an interior that's less useful and versatile that you might think.

The 2014 Scion xB has one of the boxiest silhouettes on the market, among small vehicles, and so it would make a lot of sense if this vehicle offered some of the best cargo space and versatility in its class.

Oddly, that's not the case. While the xB has decent passenger space, the seats aren't comfortably set up; and to add up to an almost complete fail, the seats don't allow you to make the most of all that space in the boxy xB.

The xB's somewhat skimpy, thinly upholstered seats simply don't yield the kind of long-distance comfort some buyers will demand. There is enough headroom, and the telescopic steering wheel allows you to get to a good driving position, however.

The back seat, with its tall doors and wide door openings, is a snap to climb into—and perhaps one of the reasons taxi companies in some cities have pressed the xB into service. There's good foot space under the front seats for second-row passengers is good, and they sit high for easy entry and exit. There's additional storage room under the second-row seats, plus interior bins and storage areas—especially with the available overhead console.

When it comes time to stash some larger cargo in back, the xB can be a bit disappointing; the back seats seem to gobble up too much height when folded, and they don't fold completely flat. The front passenger seat folds back almost flat, though, and that helps.


Ride and refinement are a step behind many rival models, too. The xB tends to ride quite well at lower speeds, but it's less comfortable for long-distance cruising—with pitchiness over imperfect roads with expansion strips or frost heaves. It's a vehicle built to a price point, so expect about the same standard of noise and vibration isolation as a base-level compact sedan or hatchback.

The 2014 Scion xB is a safe pick -- whether you go by its feature set or crash-test ratings.

The 2014 Scion xB continues to set its sights on younger drivers -- and with good crash-test scores and a respectable list of safety features, there's nothing to avoid here.

The federal government hasn't crash-tested the Scion xB in many model years, although the Insurance Institute for Highway Safety (IIHS) has given the xB a 'good' rating for all its crash tests.

Front, side, and side-curtain airbags are all included, as is stability control, which can be temporarily disengaged to churn through snowy driveways.

From a driving standpoint, the xB can be frustrating for its lack of outward visibility; the wide rear pillars create a substantial blind spot for most drivers.

Used Scion xB for sale near

The xB's feature list has been bolstered this year with touch-screen entertainment systems included on the entire model line.

The 2014 Scion xB is well-equipped, but it doesn't leave you many choices in terms of factory options.

It's how Scion sells all of its cars—usually with just one factory build, yet with seemingly countless port- or dealer-installed extras. Essentially, you can personalize or customize the xB, to whatever form you want—like a vehicle with a sharper look and feel, one that screams out in bright colors and graphics, or special details like carbon fiber applique.

Performance upgrades are on the list, too, although they're rather limited with the xB. A short-shift kit, Toyota Racing Division (TRD) sport suspension upgrades, and flashier wheels are some of the possibilities.

Review continues below
Newly standard this year is a Display Audio system that includes a 6.1-inch touch screen, with six speakers, Bluetooth and HD Radio technology, a USB port, and an auxiliary audio jack.
7

Fuel economy isn't anything remarkable for the 2014 Scion xB; you'd do better in many vehicles a size larger.

Whether you get it with the manual gearbox or the four-speed automatic, the 2014 Scion xB comes with EPA mileage numbers of 22 mpg city, 28 highway.

It's disappointing, as you'll do better than that overall in a number of mid-size sedans, like the Toyota Camry, and better on the highway even on some much larger V-6 sedans, like the Avalon. Toyota's hybrid models are gas-mileage leaders, but the Scion xB, with a non-hybrid four-cylinder powertrain, doesn't follow that; it lags toward the back of the pack, as well as behind the Kia Soul.

Review continues below
We've noted that when the xB is driven above 70 mph, its real-world mileage drops drastically; while this might be a reasonably fuel-efficient model around town (we've seen mid 20s), if you do a lot of commuting on the highway, the boxy, brick-like shape should be a cause to look elsewhere.
Continue Reading

1 Review
5 star
4 star
100%
3 star
2 star
1 star
Rate and Review your car for The Car Connection! Tell us your own ratings for a vehicle you own. Rate your car on Performance, Safety, Features and more.
Write a Review
2014 Scion xB 5-Door Wagon Automatic (SE)

7.8
Overall
Expert Rating
Rating breakdown on a scale of 1 to 10?
Compare the 2014 Scion xB against the competition
Compare All Cars
Looking for a different year of the Scion xB?
Read reviews & get prices
Related Used Listings
Browse used listings in your area