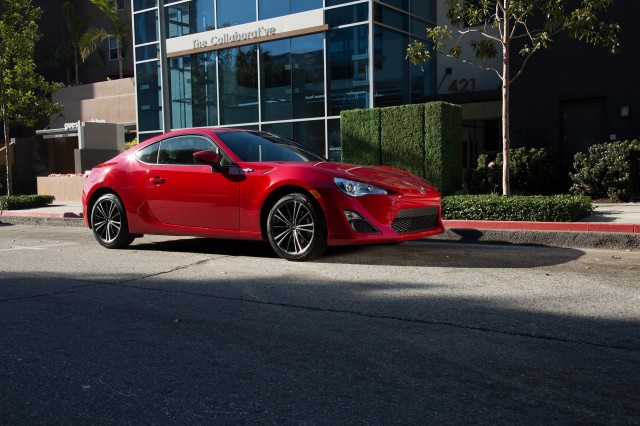 If you want this car with navigation, there are two options: check out the aftermarket or head to a Subaru dealer for a slightly more expensive BRZ.

The 2016 Scion FR-S is the perfect affordable sports car for many, with just enough in the way of creature comforts to keep it livable as a daily driver as well.

For 2016, Scion has given the FR-S its first meaningful update. Changes are mostly minor but include some visual tweaks and new trim for the cabin, a couple new colors, a new standard audio system, and the addition of a rearview camera. The new equipment comes with a slight price bump—about $400.

The FR-S has a nimble and fun to drive spirit, with just enough of the modern conveniences, technology, and safety equipment to keep it from being a penalty box anywhere but a twisty mountain road. It's a sports car at its essence and among the purest of enthusiast cars on the market today, and it’s also quite affordable.

Simple surfaces give the FR-S classic proportions. Details at the nose and tail provide a modern, aerodynamic look to the car. Inside, the Scion FR-S is basic, but well-built and handsome—if not quite beautiful.

This little Scion touts the brand's economical and relatively practical qualities, but they're not necessarily the focus for the FR-S. Instead, this Subaru-built, Toyota-designed sports coupe is engineered for fun above all else.

It's powered by a 2.0-liter horizontally opposed 4-cylinder engine that produces 200 horsepower. At 151 pound-feet, it's not exactly a torque monster, especially in the low-rev range. You can run the car all the way up to its 7,400-rpm redline, though, where you'll find a little more power when you need it. As long as you don't putting some work in, the 2.0-liter engine rewards you. The engine is a variation of a Subaru design, with Toyota's direct- and port-injection system added in.

Steering is a mixed bag, with the precise and well-weighted electric power assist taking out much of the feel, leaving behind an intuitive and quick—but not very communicative—wheel. The brakes are easy to modulate and adequate for the car's weight and tire fitment, easily surviving a half-dozen laps on track or a long, fast canyon run. And the FR-S actually uses low-rolling-resistance tires, like those you'd normally find on a hybrid or fuel-economy special, in part to limit overall grip and let the driver toss the tail around a bit.

Once you've reconciled yourself with grabbing the flat four by the nape of its neck and squeezing for all it's worth, the FR-S becomes a second skin. Nimble, light (by modern standards), and incredibly neutral in its balance, the Scion FR-S captures the essence of what a sports car should be: honest, inexpensive fun.

Sitting in the FR-S isn't a chore, either. Though there's a sound pipe to bring some of the car's growling engine note into the cabin, very little actual exhaust noise is heard at all. Wind and road noise can become prominent at speeds above 70 mph.

But the seats, in the front, are where the FR-S's interior really shines. Well-bolstered, comfortable, with plenty of leg and hip room for larger and taller drivers, the front seats are an excellent offering for a production vehicle. The rear seat is best reserved for children and shorter adults, though it is serviceable for even 6-footers in a pinch.

On the equipment front, there's not much to talk about: the Scion FR-S only has a few choices to be made. Fortunately, those choices include available premium audio with apps capability, while standard gear includes Bluetooth, keyless entry, and climate control.

Six airbags, anti-lock brakes, stability and traction control are all among the standard safety equipment, as well as the newly standard rearview camera. Federal officials have given the FR-S a five-star overall score—including four stars in front crash protection—while the IIHS has rated it "Good" in all categories—save for an "Acceptable" score in the new small overlap frontal category, still good enough for a Top Safety Pick award.

Fuel economy for a lightweight, low power sports coupe should be predictably better. The manual-transmission Scion FR-S is rated by the EPA at 22 mpg city, 30 highway, 25 combined, which is good—but should be better.

With spare lines and a minimum of detail, the Scion FR-S's styling reflects its mission.

Despite drawing inspiration from classic Japanese sports car design, the Scion FR-S is a modern car with current styling.

Sleek, low, and curvy, the FR-S carries the old-school long hood/short deck proportions that, for many, define the look of a sports car. Detail work at the nose includes a wide grille opening, sharply angled vents in the lower fascia, and smooth curves that flow into the hood and fenders.

The fenders themselves are slightly flared and also bulge upward from the hood line. A simple side profile sees the roof sweep up and dive down again in a graceful arc, meeting the rear fenders and stubby tail.

The cabin of the FR-S follows this form-follows-function, minimalist aesthetic, using carbon-look accents and durable plastics molded in flowing, simple lines. The nearly monochromatic upholstery helps put the gauge cluster front-and-center for the driver. For 2016, the interior is prettied up a bit with some new silver accent trim pieces.

We'll call it a modern classic: the FR-S is affordable, nimble, and has reachable, real-world handling limits.

The 2016 Scion FR-S continues to offer a single engine with a choice of two transmissions. Thanks to its solid, well-tuned chassis, the FR-S is just as fun with the automatic as it is with the standard manual gearbox.

Power isn't the Scion FR-S's strong suit or its focus and never has been. Its Subaru-supplied 200-horsepower, 2.0-liter four-cylinder horizontally opposed engine sits low and rearward in the nose, linked to either a 6-speed manual or a paddle-shifted 6-speed automatic powering the rear wheels. Maximum torque output is 151 pound-feet, arriving at 400 rpm short of the 7,000-rpm power peak. Neither power nor torque figures are impressive, even for a lightweight sports car. Fortunately, the FR-S is less about straightline speed or acceleration—it manages a 6.8-second 0–60 mph time—than it is about what it does when the road bends.

What the FR-S does in corners is convert gasoline and $25,000 into an infinite supply of fun behind the wheel. Light, tossable, and balanced, the FR-S's does not have very high limits, thanks in part to fairly low-grip standard tires. Those limits are very approachable and, best of all, it's easy to keep the FR-S near them—a feat almost impossible, on the street or the track, in stratospherically high-performance cars. For 2015, the suspension was mildly retuned to mimic that of the Subaru BRZ more closely.

The FR-S has big trunk space and room for two adults in front, about the best you can expect from a sports coupe.

Don't be fooled by the Scion FR-S's spartan interior. While there may not be too many moving parts inside, the things you can touch all feel solid and well-built. It manages to be just utilitarian enough while avoiding the feeling of having been built to a price.

The little Scion coupe's front seats are roomy and comfortable, while also offering enough bolstering for support during spirited driving. Head and leg room are also quite good, allowing the car to accommodate drivers over 6 feet tall with ease. The rear seats are small, and only minimal knee and leg room is available with the front seats at their rearmost positions. With slightly shorter front-row occupants, the rear seat can work even for taller adults, but on the whole, it's best reserved for children and gear.

Cargo space isn't abundant, but it's not bad for a 2+2 coupe (four people fit in the FR-S, in theory) especially if you utilize the rear seats for cargo. The trunk is reasonably sized with a well-shaped aperture allowing medium-sized bags to fit easily. The rear seats also fold flat to open up much more horizontal space, though taller items won't fit in the shallow trunk.

Scion says the FR-S was designed to hold four wheels and tires, a toolbox, a helmet, and a driver—all you need for a basic day at the track.

Advanced technology safety features like blind-spot monitors and lane-keeping aren't available in the Scion FR-S, but, at the $25,000 price point, that's understandable.

The NHTSA has given the FR-S a five-star overall score—which includes a four-star score for frontal crash protection. The IIHS has rated it "Good" in all categories, save for an "Acceptable" in the new small-overlap frontal category.

Standard safety equipment includes the basics such as six airbags, anti-lock brakes, and stability and traction control. A limited-slip differential improves low-grip traction and starts from a stop. For 2016, all FR-S models gain a rearview camera, which alleviates the problem of its mild blind spots when backing up.

Used Scion FR-S for sale near

The FR-S keeps it simple in terms of features, but a premium sound kit is offered.

The 2016 Scion FR-S isn't available with many optional features, but the standard kit is pretty good on its own merits.

For 2016, the FR-S comes with a standard touchscreen audio system as well as a rearview camera. The infotainment system has a 7.0-inch screen and voice control.

Most of the options and upgrades can be had a la carte rather than bundled into pricey packages, which makes it easier to get just the FR-S you want, without stuff you don't need. Highlights of the standard equipment include manually adjustable six-way driver and four-way passenger front seats; fold-flat rear seats; a first-aid kit; a leather-wrapped steering wheel; an eight-speaker audio system; and USB/Bluetooth/auxiliary inputs.

Some of the optional extras for the FR-S include accessories like wheel locks, carpeted trunk and cabin floor mats, an ashtray kit, and mud guards. Scion dealers also offer performance items, such as suspension kits and larger wheels.

One notable absence from the options list is navigation. If you want this same basic car with navigation, you'll want to check out the slightly pricier Subaru BRZ.

The FR-S focuses on high-revving fun, but fuel economy doesn't suffer too badly.

When 455-horsepower sports cars like the Chevrolet Corvette Stingray achieve as much as 30 mpg highway, the Scion FR-S's 200 horsepower and combined ratings between 25 and 28 mpg rating are underwhelming.

The manual-transmission Scion FR-S is rated by the EPA at 22 mpg city, 30 highway, 25 combined. Those are good, but not especially impressive figures for a compact, lightweight 4-cylinder car.

The automatic transmission in the 2016 Scion FR-S is the clear winner for fuel economy, even if it's not quite as much fun to play with. With it optioned, the figures land at 25/34/28 mpg—much closer to what we'd expect for the FR-S.

A fantastic car to wake up to every day.

Wanting a Lotus Elise or Porsche Cayman but can't afford one, the FRS is closest to those cars for a fraction of the money.
Looking for a ride which keeps you smiling always whilst driving, often laughing, this is it.
+ More »
people found this helpful.
Was this review helpful to you? Yes
2016 Scion FR-S 2-Door Coupe Manual (GS)

Something to think really hard about