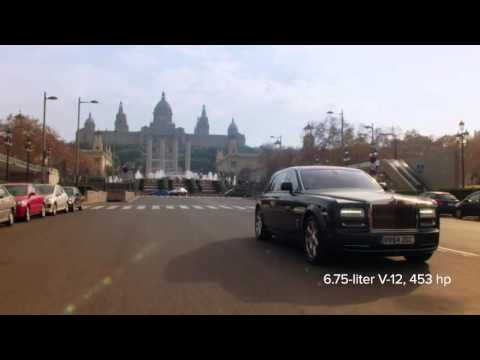 The options list is extensive for both technologies and cosmetic customization—even a pen costing more than $6,100. If you can afford a Phantom, though, you can afford to make it your own.

The 2016 Rolls-Royce Phantom delivers the utmost in motoring luxury in all of its derivatives, with a price tag to match.

When you're looking for the most exclusive vehicles in the world, the list narrows dramatically—to a point where even Mercedes-Benz and BMW are strictly for commoners.

It could be argued that the Rolls-Royce Phantom represents the pinnacle of the auto world, the sole occupant of some very rarefied air. Shy of the latest Maybach revival and the Bentley Mulsanne, there's no production vehicle that comes close to its levels of opulence—or to its price tag.

The Phantom is unchanged for 2016.

As a Phantom Coupe, a Drophead Coupe (convertible), or a four-door sedan, the Phantom is the definitive statement of what Rolls-Royce is. It's substantial, and substantially expensive. It's lavish in its design flourishes and trims, and even has rear-hinged doors—all the better to call out the importance of the rear-seat occupants when they arrive in style. Those doors are even operated by push-button, in case you'd like to go stealth-wealthy and exit on your own, without the assistance of your driver or doorman.

The Phantom line was introduced in 2003, but the looks remain timelessly elegant. A classically-styled, upright grille dominates the front, with slab-sided proportions and hideaway Spirit of Ecstasy hood ornament harkening back to the company's past. Revisions over the years have kept it fresh, however. Inside, the Phantom continues to set the bar for opulence in a car. Full-grain woods, hand-stitched, high-quality leathers, real metal trim and immaculate craftsmanship and attention to detail flood the cabin.

Detailing is the Phantom's strong suit, with deco-like lighting and old-world looks to the dials and buttons, despite the electronics offered onboard as standard. The headliner can be fitted with lots of LEDs to make it look as though your passengers are gazing into the sky at night. The Drophead Coupe model can even be optioned with teak decking around the back that would make most yachts jealous. As you'd expect, all Phantoms provide a very comfortable place to ride, front seats or rear. Everything about it says, "flagship."

Motivation for the Phantom comes from the massive 6.75-liter V-12 engine rated at 453 horsepower and 531 pound-feet of torque. It may not be as potent as the engine in the smaller Ghost, but it's still enough to get the Phantom to 60 mph in less than six seconds. Outright speed is not the mission of the Phantom, anyway, it's providing an effortless and serene atmosphere. An 8-speed automatic transmission handles the gear shifts, imperceptibly so, sending power to the rear wheels.

The Phantom sedan isn't a driver's car. It's meant to be ridden in, with a driver at the helm. Accordingly, handling and agility aren't among its strengths; at least not without considering its size. At nearly 6,000 pounds and almost 20 feet long, the Phantom is Chevrolet Suburban-sized. It lords over pretty much everything that isn't an SUV or truck. Independent suspension, self-leveling air springs, electronic damping, and feather-light steering give the Phantom more maneuvering aplomb than you'd expect, however. Fuel economy is also in line with its size, at 11 mpg city, 19 highway, 14 combined for all models.

While the Phantom hasn't been crash-tested by the official agencies, it is a substantial piece of machinery, made largely of steel, and outfitted with nearly all of the modern technologies fitted to cars, including traction and stability control, a suite of airbags, parking sensors, and optional front and rear cameras. Some of the latest in computerized safety features aren't available, however, including lane-departure warning, adaptive cruise control, and blind-spot detection. Here's where the Phantom could use some more modernization.

The standard features list on the Phantom is extensive; nearly anything not included can be added on request—for a fee, of course. Custom paint, embroidery, wheels, headliners, upholstery styles and colors, steering wheels, drink cabinets, and nearly any technological add-on you can imagine are all possible. This is the archetypal the-customer-is-always-right situation. The limits are your imagination and wealth.

Little has changed since the Phantom was new in the 2009 model year—you can read our first drive of the Rolls-Royce Phantom at our sister site, Motor Authority.