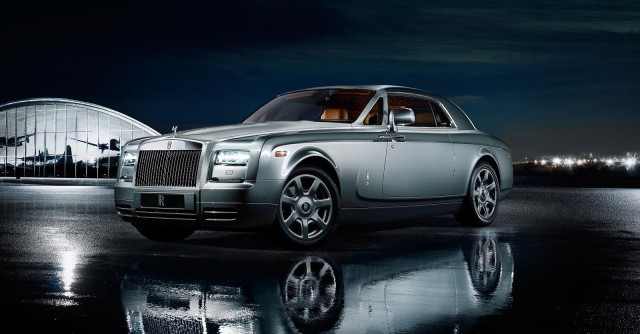 With the Phantom, you're freed from the constraints of a typical car purchase--in truth, there are none, except your willingness to spend. At the same time, that freedom can be crippling. With so many options to choose from, deciding on your Phantom's specification can best be accomplished by a strong set of opinions or a hired designer.

The 2013 Rolls-Royce Phantom, in sedan, Coupe, and Drophead Coupe forms, brings a regal bearing and unmistakable presence to the owner--and it ought to, for the price.

Life at the pinnacle of extreme automotive luxury isn't easy, but it sure looks like it for the Rolls-Royce Phantom. As the brand's top-of-the-line model, available in Coupe, Sedan, and Drophead Coupe (convertible) forms, it's rivaled only by Bentley's new Mulsanne.

Whichever from of Phantom you choose, it's an expansive, substantial vehicle. A distinctive, classically-styled exterior with tall, upright grille, Spirit of Ecstasy hood ornament, and slab-sided proportions recall the company's origins, while melding with that heritage a modern spirit.

The Phantom's cabin is, simply, the definition of automotive opulence. Full-grain woods, supple hand-stitched leathers, real metal trim, and in all of them, immaculate craftsmanship and attention to detail. Everything you can see, touch, or smell speaks of quality and substance.

As you'd expect, it's a very comfortable place to be, front seats or rear. It is, after all, Rolls-Royce's flagship.

Moving the one-car show that is the Phantom down the road is a 6.75-liter V-12 engine rated at 453 horsepower and 531 pound-feet of torque. While less forceful than the engine in the smaller Ghost, it's still enough to get the Phantom to 60 mph in under six seconds--and it does it in a serene, unflappable manner. An eight-speed automatic transmission handles the gear shifts, sending power to the rear wheels.

The Phantom isn't a driver's car. It's meant to be ridden in, driven by a chauffeur. Accordingly, handling and agility aren't among its strengths; at least not without considering its size. At nearly 6,000 pounds and almost 20 feet in length, the Phantom is very large. Independent suspension, self-leveling air springs, electronic damping, and feather-light steering give the Phantom more maneuvering aplomb than you'd expect, but only in perspective. Fuel economy is also in line with its size, at 11 mpg city and 19 mpg highway for all models.

The standard features list on the Phantom is extensive; nearly anything not included can be added on request, for a fee, of course. Custom paint, embroidery, wheels, headliners, upholstery styles and colors, steering wheels, drink cabinets, and nearly any technological add-on you can imagine are all possible. This is the archetypal the-customer-is-always-right situation. The limits are your imagination and wealth.

Even heads of state, bank executives, and stars have to consider safety, and while the Phantom hasn't been crash tested by the official agencies, it is a substantial piece of machinery, made largely of steel, and outfitted with nearly all of the modern accoutrements you'd expect, including traction and stability control, a suite of airbags, parking sensors, and optional front and rear cameras. Some of the latest in computerized safety features aren't available, however, including lane-departure warning, adaptive cruise control, and blind-spot detection.

Little has changed since the Phantom was new in the 2009 model year - you can read our first drive of the Rolls-Royce Phantom at our sister site, Motor Authority.

Be the first one to write a review on 2013 Rolls-Royce Phantom
Rate and Review your car for The Car Connection! Tell us your own ratings for a vehicle you own. Rate your car on Performance, Safety, Features and more.
Write a Review
Browse Used Listings
in your area
8.4
Overall
Expert Rating
Rating breakdown on a scale of 1 to 10?
Compare the 2013 Rolls-Royce Phantom against the competition
Looking for a different year of the Rolls-Royce Phantom?
Read reviews & get prices