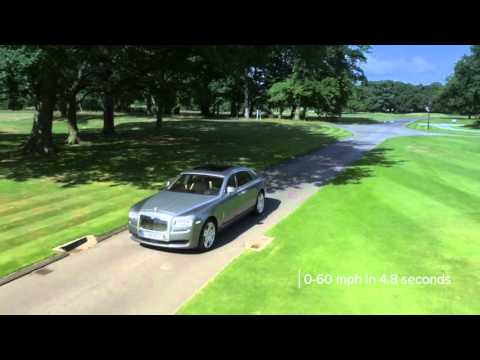 Bespoke-equipped versions may set yourself apart, but they command a long wait. There are enough Ghosts around to get one from a dealer if you're in a hurry.

The 2016 Rolls-Royce Ghost is audacious in its opulence, but responsive on the road—just what the leaders of the world demand.

The Rolls-Royce Ghost Series II represents the way the historic luxury brand has evolved under BMW stewardship. This revised version of its "entry" sedan continues to encapsulate the Rolls-Royce way of prestige and presence in an ever-so slightly smaller but still eye-catching way.

Last year's changes to the Ghost, earning the Series II designation, brought some moderate revisions to a successful Rolls-Royce model, keeping the interest up without diminishing the striking looks and audacious levels of luxury. For 2016, the Ghost Series II is unchanged.

The Ghost continues to be propelled by a 6.6-liter twin-turbocharged V-12 engine with 563 horsepower and 575 pound-feet of torque for effortless power and refinement, despite the car's weighty 5,445-pound mass—5,556 pounds if you go for the extended-wheelbase form. Acceleration from 0-60 mph happens in a brisk 4.8 seconds.

The Series II brought a new 8-speed automatic that features what Rolls-Royce calls "Satellite Aided Transmission technology," that allowed the Ghost to predict and select gears based on the road’s bends and rises. This smooths out the driving for minimal shifting intrusion that could disturb the atmosphere in the leather and wood-lined cabin.

While it shouldn't be a surprise the Ghost cossets and pampers its passengers, it may come as a shock that it's also responsive to drive. Press the accelerator, and it glides forward—rapidly—seemingly without any effort exerted on its part. Press on the brakes and its slows promptly, with a minimum of fuss. Turn the wheel, and you’ll find slightly more feedback than in the previous Ghost thanks to a new steering configuration, and that steering wheel rim will be thicker for greater comfort. This is, after all, the Rolls-Royce to drive, rather than be driven in.

The ride quality is where a Rolls-Royce has to succeed and the Ghost truly shines. Size, weight, and very large wheels coupled with fairly low-profile tires, are known enemies of good ride quality; it can be very difficult to tune a car to control such a combination of physics while also coddling the occupants. Rolls-Royce’s engineers have figured out how.

The Ghost’s large air struts, dynamic dampers, and rear-end kinematics were all re-engineered for the Series II. The result is an incrementally, but noticeably, smoother, more settled ride to keep Rolls at the leading edge of effortlessly comfortable rides in luxury cars. Handling is somewhat sharper, too, but despite the roots, this is no "Ultimate Driving Machine." That's not the Ghost's mission in life anyway.

Inside, Rolls-Royce shoppers may notice the odd switch from a 7-Series or a distinctly iDrive-like experience when navigating the electronics interface. But the Ghost still carries a distinct experience all its own, with noticeable heritage pieces that show this is no everyday luxury sedan.

From the newly refinished clock in the dashboard and the instrument panel dials that evokes premium luxury watches, the rear seats slightly angled toward each other for easier conversation and the Spirit of Ecstasy inlay under the infotainment system’s rotary controller, the Ghost is outrageous without being completely ostentatious. As expected, there is so much real in the materials and everything covered by leather, metal or wood, that commoners will feel like touching everything.

For buyers who want even more exclusivity, the Bespoke program offers extended leather upholstery options and special wood trims to choose from. For a price, of course.

On the technology front, the Ghost has a wi-fi hotspot, offering easy connectivity for any on-the-go data needs. The Bespoke Audio System is the one Rolls-Royce bills as the “most exhaustively engineered and finest audio system in automotive history.”  An ambitious claim, and unfortunately, in our limited time with the car thus far, it doesn’t live up to the hype. Sound from the system proved to be tinny at high frequencies, muddy in the mid-range, and weak on bass—even after adjusting the settings in the infotainment system. With other luxury and ultra-luxury carmakers offering truly excellent—and unique to individual cars—sound systems from brands like Burmester, Bang & Olufsen, and Bowers & Wilkins, it’s hard to recommend the in-house-developed Bespoke Audio System over the alternatives.

That one beef aside, the Rolls-Royce Ghost Series II shows it's aging gracefully, keeping Rolls-Royce faithful content while giving the "new money" a reason to look at the Spirit of Ecstasy. The Ghost presents a compelling, luxurious package of features and capabilities, well-suited to its target audience: the younger half of the movers and shakers in the technology, financial, and business worlds. For those lucky, capable few, the Ghost Series II may be just what they’re after.