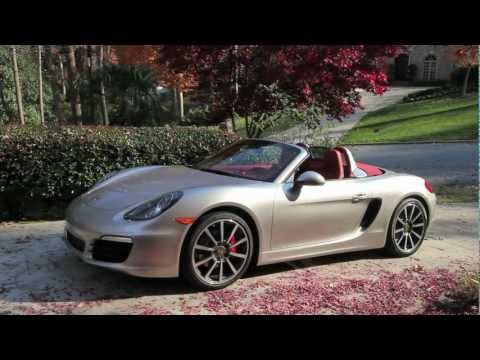 The 2013 Boxster S is the livelier companion of the two, but beware its huge price jump and expensive add-on upgrades.

The 2013 Porsche Boxster is one of the most fun, stylish, and luxurious roadsters available.

All-new for 2013, the Porsche Boxster is more capable on track and off, and more refined inside and out--in fact, it may just be the best of the compact luxury roadster crop.

The entirely new chassis is stiffer and lighter, and it's wrapped in brand-new bodywork that lifts the Boxster from its cute-but-mild past into a more aggressive, but still sophisticated role as the sub-911 convertible sports car in Porsche's range. Inside, the cabin is much more highly evolved, with better materials, 911-esque design cues, and reduced--though still present--cabin noise.

Its performance matches the looks. Whether choosing the 2.7-liter base Boxster or the 3.4-liter Boxster S, the engines are quick to rev and potent--both torque and power are readily available. The 3.4-liter engine in particular shines, with an aggressive bark at full throttle that lets you know the 315 horses inside have been loosed for full enjoyment. Accelerating to 60 mph in just 4.8 seconds and on to 178 mph top speed, the Boxster S isn't far off a few-years-old 911--though it's priced from just $60,900 brand new. The 265-horsepower base model starts at $49,500 and still manages to get to 60 mph in just 5.5 seconds and on to a top speed of 164 mph. A choice of six-speed manual or seven-speed PDK dual-clutch paddle-shift automatic transmission is available in either model.

But it's not all power and straight-line acceleration that define the Boxster; if anything, it's the poise with which the Boxster attacks the curves that is it s defining element. While the new electric power steering of the 2013 Boxster yields a different feel from past Boxsters, the overall level of communication, weight, and response in the driver's hands is still an exemplar for the class.

Ride and comfort around town are very good, too, especially when equipped with the adjustable suspension, which offers Comfort, Sport, and Sport Plus modes for progressively more aggressive driving. Dialed back, cruising for pleasure instead of speed, the Boxster is surprisingly sedate, top up or down. The seats are very comfortable and the driving position offers good visibility for a low-slung sports car. The PDK transmission gives up nothing to the manual in terms of performance, while making city traffic as easy as with an automatic. The stop-start feature saves gas, but can be a bit rough on restart--though most owners will quickly get used to the sensation. For those that don't, however, the auto stop-start feature can be disabled.

One highlight of the 2013 Boxster is that it sticks with a soft top while the competition has gone to retractable hard tops. Unlike the others, the Porsche's top can be opened or closed at speeds just over 30 mph, and it takes no space in the trunk.

The 2013 Porsche Boxster hasn't yet been crash tested by the NHTSA or the IIHS, but it does offer an excellent set of brakes; Porsche Stability Management (PSM) traction/stability control; rollover protection; and front, thorax, and side impact airbags.

The curves are sharper, with more creases than the previous-generation Boxster, giving the roadster a more aggressive look, particluarly at the front and sides. The large scoops just before the rear wheels aren't just for show, either: they feed the engine its air and help with cooling.

Inside the cabin, the Boxster moves even farther forward, adopting a look that's legitimately luxurious. The overall layout is similar to the larger 911. While the button layout is a bit busy to the eye, it's highly functional.

Even parked next to its closest competitors from BMW and Mercedes, the 2013 Porsche Boxster stands out. On its own, it's a head-turner.

Both models are available with either a six-speed manual (no seven-speed manual like you'll find in the Porsche 911), or a seven-speed PDK dual-clutch automatic with paddle shifters. For the enthusiast, the manual might make sense, but the PDK is nearly as fun and far easier to drive quickly, both on track and around town.

Power isn't the Boxster's main attraction, despite having plenty of it. It's handling that draws in a Boxster buyer, and the 2013 model takes advantage of a lighter, stiffer chassis and bespoke tires to make the most of Porsche's long-standing know-how when it comes to dynamics. Electric power steering numbs the feel ever so slightly, but it's easily among the two best such systems we've tested—the other belonging to the 911. All-around, the 2013 Porsche Boxster shines as the leading example of sporty handling in its class.

For models equipped with the adjustable suspension system (Porsche Active Suspension Management, or PASM), the driver-selectable "comfort," "normal," and "sport" modes allow tuning the suspension compliance to the task at hand.

Roomier than it looks and quieter than the previous model, the 2013 Porsche Boxster is as luxurious as it is sporty.

With the 2013 redesign, the Porsche Boxster gains some much-needed luxury, quietness, and modern looks--all executed with high-quality materials, comfortable seats, and a remarkably capable soft top.

Unlike the competition, which has switched to folding hard tops, the Boxster's soft top is both lighter and smaller, taking up no trunk space at all. It's also able to open or close at speeds just over 30 mph with the push of a button.

The cabin itself is well laid out, with controls easily within reach of either seat. The design is somewhat busy on the center stack, but with a few days' familiarity, it all makes sense enough.

The seats themselves are quite comfortable, with more room than you'd expect in a small two-seater. The materials lining the seats and the rest of the cabin feel and look like they should in a $45,000-$60,000 car: very nice. An optional leather package adds even more hide to take the look and feel further upscale.

Reducing the complexity of last year's Boxster somewhat on the infotainment front is Porsche Communication Management, accessed through a 7-inch high-res touchscreen. Audio and navigation controls are all accessed through this interface, and it's far more intuitive than the button-laden system of yore. It's even capable of recognizing voice input for certain functions.

Noise level, one of the main problems with the last-generation Boxster, is still somewhat high (it is a mid-engine sports car, after all) but on the whole, is reduced noticeably. Wind and road noise are minimal at typical cruising speeds, and the engine only speaks up to make its presence heard (and felt) when pressed hard.

A long list of standard safety features and a light, strong aluminum chassis counterbalance the lack of official crash-test results for the 2013 Porsche Boxster.

Despite the lack of test results, however, Porsche's light and strong chassis in the new 2013 model is likely as tough as any compact roadster, and the standard safety equipment list is comprehensive: anti-lock brakes; traction and stability control; dual front and side airbags, with door-sill side-curtain airbags; and an integral thorax side airbag in the seat bolsters.

Visibility out of the Boxster is generally great, though the rear-quarter view can be compromised for shorter drivers. Porsche doesn't offer a backup camera for the Boxster, but rear parking sensors are available.

Used Porsche Boxster for sale near

Well-equipped in base trim, the 2013 Porsche Boxster offers more options than you can shake a stick at--but beware the rapidly mounting price.

The 2013 Porsche Boxster offers more standard equipment than before despite weighing slightly less; and what you get, looking at convenience features, is surprisingly close to that of comfort-oriented luxury sedans.

Optional extras are plentiful but can drive the cost up by $20k or more. They include a Bose surround sound system; a 7-inch touchscreen navigation system and infotainment center; a range of sport steering wheels and seats; leather interior upgrade package; and a range of other convenience upgrades.

It's no hybrid, but the sport and power of the 2013 Porsche Boxster come at surprisingly little expense at the pump.

The 2013 Porsche Boxster is no Prius C, to be sure, but it's a relative fuel miser compared to many cars with similar power and performance.

In real-world driving with the Boxster, we've managed mileage numbers in the low 20s when not sparing any exuberance; practically speaking it's one of the more efficient true sports cars—especially when you could six-cylinder models.

2 Reviews
5 star
100%
4 star
3 star
2 star
1 star
Rate and Review your car for The Car Connection! Tell us your own ratings for a vehicle you own. Rate your car on Performance, Safety, Features and more.
Write a Review
2013 Porsche Boxster 2-Door Roadster S

Love the car, especially this time of year!

Great car, puts a smile on my face every time that I drive it!
people found this helpful.
Was this review helpful to you? Yes
For 2013 Porsche Boxster