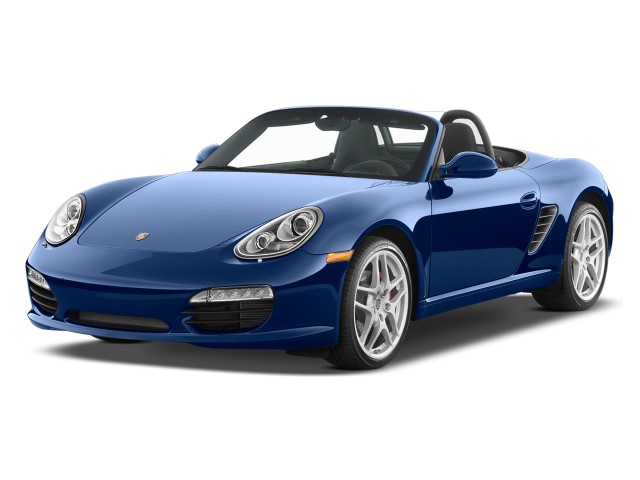 The base is all the car you need for fun on the street, but if you have a need for serious speed, the Boxster S or Spyder is sure to please.

The 2011 Porsche Boxster is a fun, attractive, and capable roadster-everything you want it to be.

The 2011 Porsche Boxster is a rare sportscar--emotional and rational. All the numbers prove out its spectacular performance, but it's not until you get a hand on its wheel and a foot on its pedals that those those figures turn into a huge, never-fade grin.

It starts from the fenders, just like the ones you've seen in historic images of Porsches past. They're sculpted to bring up the past without using a dredger, and they're faired in with modern, elliptical headlamps and rhomboid taillamps that cap the shape's tidy, race-inspired surfaces. The more the Boxster ages, the more it gains in grace. You'll want the interior wrapped in leather, we think, as the base cabin's plastics are a little bit of a jolt once you step inside.

Twist the key to life, and the Boxster wakes up with Porsche's trademark sonorous growl. Six cylinders hammer away behind your head long enough and you might get restive--if you're lame. Every Boxster will drop a 0-60 mph run in less than 5.5 seconds, whether you choose the hefty six-speed manual or the definitive seven-speed dual-clutch gearbox. Cornering grip is abundant, natural-feeling steering lures drivers to every next corner, and the tightly suspended Boxster won't usually rattle their teeth, even with 19-inch wheels and tires.

Every Boxster has power features, Bluetooth and a CD player. A vast options list can bring in navigation, leather and aluminum trim, even ventilated seats. The Boxster Spyder goes in the opposite direction, pulling out the power top and elaborate seats and the air conditioning to deliver an even more direct driving experience. It hardly seems possible, or even necessary.

It's a bit of oversimplification, but the Boxster is so convincing in its style because it's so close to the original Porsche Spyders, seen through modern eyes.

The Boxster's classic, clean lines and flowing fenders seem to erupt right from the design studio--or from a historic collection. It's a little subdued, like a timeless piece of fashion, and hasn't been updated much since it was new in the mid-2000s--but the Spyder version makes up for that with bodacious "Porsche" script down its sides, if you want. The only cues that don't come off as well as they could, or should, are the big air intakes on the nose. They're functional holes that cool the brakes and smooth airflow, but they're also a distraction from the Boxster's smoothly sculpted nose and its elliptical headlamps.

Sitting at the controls, the Boxster's more functional side takes over. Ergonomics are a bit messy, but the basic shapes are familiar and friendly enough, down to the ignition on the left side of the steering wheel. Lots of small buttons dot the dash, and a chintzy cupholder pops out of a flimsy plastic trim panel--but then, the dash can be slathered in leather trim or highlighted with aluminum. The Boxster's big tachometer sits front and center--and that sends the clearest message of all the gauges of this roadster.

No matter which model you prefer, the Boxster comes standard with brilliant acceleration and road manners. On twisty roads or boulevard cruises, it feels natural and intuitive, from the steering to the brakes. Few cars have the immediate feel you get at the Boxster's rudder, and it's a rare moment when the tautly tuned suspension truly beats you up. It can't escape all situations but it's amazing how the Boxster enables average drivers to road-carver class, in just a few miles.

The powertrain is pure Porsche, down to the boxer cylinder arrangement. The stock 2.9-liter horizontally-opposed six-cylinder spins out 255 horsepower. It's teamed either with a slick, meaty six-speed manual transmission with hefty shift feel, or with Porsche's Doppelkupplungsgetriebe--we say "PDK," or translated, dual-clutch transmission. Either way, the Boxster's a slapshot to 60 mph: Porsche quotes a 5.8-second 0-60 mph time for the manual and 5.5 seconds with the PDK. An optional Sport Chrono Plus package trims the PDK's time down to a mere 5.3 seconds by remapping shift speeds and throttle.

A notch up the performance ladder, the Boxster S nudges displacement up to 3.4 liters and nets 310 horsepower. The same transmissions as the standard Boxster grant it a 0-60 mph time of 5.0 seconds with the manual; with the PDK, it's clocked at 4.9 seconds. The Sport Chrono Plus package shaves that time to a blurry 4.7 seconds.

The Boxster Spyder strips down to shear another few tenths from its acceleration figures. Porsche promises 320 horsepower extracted from the larger Boxster engine, a lower suspension and a standard limited-slip differential--with 176 pounds less weight through deleted features and a lighter, manual top.

There's more space inside the Boxster than in some darty sportscars--and far more trunk up front.

The Boxster's work environment is snug where it needs to be, and spacious where it counts.

Even the base chairs are well-formed, but the Boxster's available sport seats are well-bolstered, too. Foot room is fine, and the center stack of easy-to-use controls doesn't rob too much knee room.

Ergonomics haven't been Porsche's strong suit, but the controls in the Boxster at least are conveniently placed--the cockpit's not that big, after all. The audio system still has too many buttons to be truly user-friendly, though.

Storage space inside is minimal. Twin trunks, front and back, trunks team up for 9.9 cubic feet of total stow space--4.6 cubes in back and 5.3 cubes in front.


In all but the Spyder, the power convertible top is easy to use. The Spyder gets a top all its own, and it's more an emergency rain guard, manually operated, with much less of the standard Boxster's thick soundproofing and rich lining.

A final point about the Boxster's comfort: there's plenty of road and wind noise for two people. If you can't tolerate a totally immersive driving experience, ears included, the Boxster simply isn't for you. Drivers that love the wrap-around feel of the Boxster, glorious engine noise and all, will soak it all up as atmosphere.

The Boxster hasn't been crash-tested, but it's stocked with some safety features above and beyond those found in most sports cars.

The 2011 Porsche Boxster gets a relatively high safety score, even though crash-test results aren't forthcoming.

Neither the National Highway Traffic Safety Administration (NHTSA) nor the Insurance Institute for Highway Safety (IIHS) has put the Boxster through their sled tests. The addition of a roof-crush test to the IIHS' schedule, and the revision of the NHTSA star scale, probably aren't the hold-up in this case--the Boxster's high price and low sales figures are more likely the reason it hasn't been crash-tested.

The Boxster benefits from a good assortment of safety features, even without the gadgety bits like lane-departure warning systems and adaptive cruise control. Anti-lock brakes and stability control, are standard; dual front and side airbags are, too. The side airbags in the Boxster do some of the work that curtain airbags would in a coupe--they're larger than usual, are mounted in the door sills, and offer a measure of head protection usually unavailable in a convertible.

There's no option for a rearview camera, which is being studied by the NHTSA for a possible safety mandate in 2014. The Boxster does offer optional parking sensors, which can help mitigate the reduced visibility to the rear quarters.

Used Porsche Boxster for sale near

The 2011 Porsche Boxster offers plenty of standard features to satisfy, but the extensive options list will enthrall the enthusiast.

The Boxster has Porsche's typically exhaustive options list, but every roadster also comes with all the expected features--unless you're expecting them not to be there.

The Boxster and Boxster S have standard air conditioning, CD player, leather-trimmed seats, and alloy wheels, as well as power windows, locks and mirrors. A power-folding convertible top, keyless entry, and a manual transmission are standard as well. Newly standard for the 2011 model year are Bluetooth and a universal audio interface for music players, like the Apple iPod, that lets the car's audio system controls the player's functions.

The Spyder edition--stripped down to save weight and boost its chances on the track--doesn't have daytime running lights, fog lamps, or the A/C or stereo, and it comes with a manual canopy roof instead of the power-operated one standard on other models.

Options run a huge gamut, from the PDK dual-clutch gearbox, to bigger wheels and tires, to sport seats, to a wind deflector and ventilated seats, to a set of packages that bundle gear into easy-order groups. There's a Design package with 19-inch wheels, blacked-out exhaust tips, and black trim on the mirrors, vents, and interior trim; there's an Infotainment package with Porsche's navigation system, too. Sport Chrono is an option on PDK cars, and Porsche specializes in the custom color selections of your dreams.

Few sportscars can claim the high gas-mileage numbers earned by the Porsche Boxster.

The Porsche Boxster will delight owners in lots of illicit ways, but the pleasures of visiting the gas station are totally legit.

The Boxster's one of the few sportscars we can think of with such a high fuel-economy rating. In either the base Boxster, or in the Boxster Spyder, the EPA rates the Porsche convertible at 20/29 mpg when it's fitted with the PDK dual-clutch transmission (which the EPA thinks is an automatic). With the manual gearbox, it's still scored at 19/27 mpg--close to the numbers you'd get in a full-size sedan like a Buick LaCrosse, and about double what you'd see in a Lamborghini Gallardo.

Stepping into the Boxster S doesn't sacrifice that much more fuel. The S gets 19/26 mpg from the EPA when it's equipped with the manual shifter, and 20/29 mpg with the PDK.

Be the first one to write a review on 2011 Porsche Boxster
Rate and Review your car for The Car Connection! Tell us your own ratings for a vehicle you own. Rate your car on Performance, Safety, Features and more.
Write a Review
Browse Used Listings
in your area

9.0
Overall
Expert Rating
Rating breakdown on a scale of 1 to 10?
Compare the 2011 Porsche Boxster against the competition
Compare All Cars
Looking for a different year of the Porsche Boxster?
Read reviews & get prices