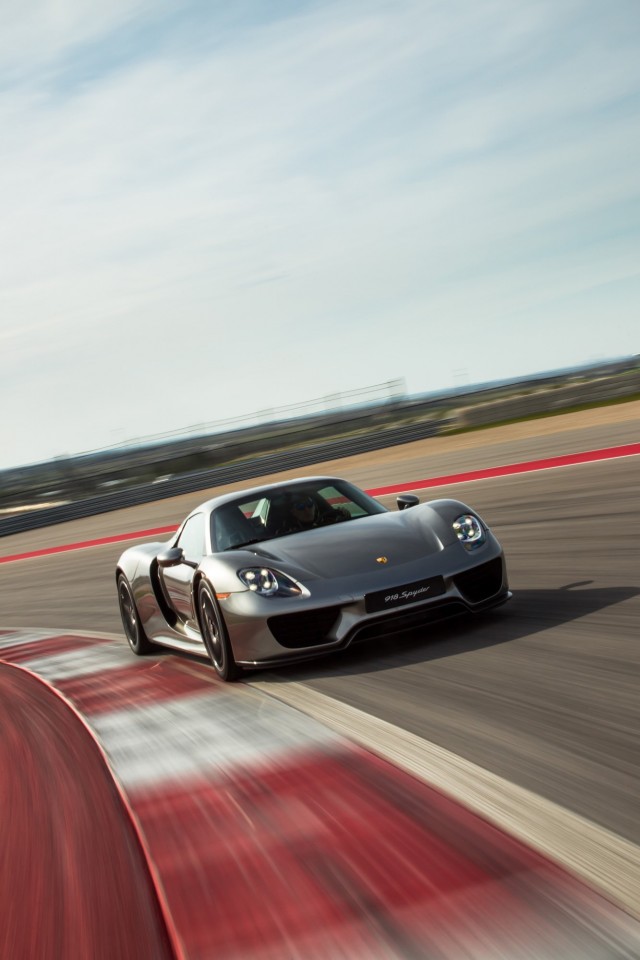 Don't hold back. Spend the time and the money to configure the 918 Spyder precisely as you'd like it--it is, after all, a statement about the owner as much as it is about Porsche. For the performance-inclined, definitely tick the Weissach package option box, as it will shave weight and add improved aerodynamics.

The 2015 Porsche 918 Spyder delivers unheralded levels of both performance and efficiency in a supercar.

With its stunning design, truly brilliant performance and surprising efficiency, Porsche’s 918 Spyder introduced the world to the idea of a hybrid hypercar. While it didn’t ultimately win the war, it’s an impressive machine in its own right.

Styled in the vein of the Carrera GT supercar, the 918 Spyder draws on the best of Porsche's heritage, while keeping both eyes firmly on the present and future. A low-slung stance wrapped in smooth, flowing curves gives the 918 an organic look, while at the same time speaking of its performance potential through muscular fenders and snarling air inlets. Inside, the 918 Spyder is not so different from more attainable Porsche products, with a clearly driver-focused interface and clean, industrial lines. A large, floating, capacitive center stack sets the 918 apart as something more than the usual.

And more than the usual is indeed the story when it comes to the 918 Spyder's drivetrain. Instead of a massive, powerful engine, the 918 uses a combination of a compact and potent 4.6-liter V-8 engine rated at 608 horsepower with a hybrid electric drive system that brings total output to 887 horsepower and 940 pound-feet of torque. Two electric motors are used, one for the front axle and one for the rear; the front axle can drive the Spyder on electric power alone, or contribute to the engine and rear motor's output for a through-the-road hybrid setup. The 918 is a plug-in hybrid, allowing the battery to reach full charge in less than seven hours from a standard 110-volt household socket, or in less than 30 minutes with the optional DC fast charger on an industrial circuit.

In total, five drive modes are available through the steering wheel controls: E-Power, Hybrid, Sport Hybrid, Race Hybrid, and Hot Lap. E-Power mode uses only electricity to power the car, with a range of about 18 miles from its 6.8-kilowatt-hour battery. Even in this limited mode, the 918 Spyder can reach 93 mph top speed and accelerate to 62 mph in about seven seconds. Hybrid and Sport Hybrid modes each provide a degree of mixed propulsion, with economy and sportiness in a progressively more aggressive balance. Race Hybrid mode pushes both the electric drive system and the V-8 engine to maximum capacity, yielding impressive performance. For maximum velocity, however, Hot Lap mode takes the 918 to its extremes, eliminating the recharge cycle on the battery to put the most power possible to the wheels. As the name indicates, Hot Lap mode is only suited to brief runs for top times.

Driving the 918 Spyder on the track at the Circuit of the Americas and on the roads and highways around Austin, Texas, we found it to be a massively impressive--and surprisingly normal--vehicle. Acceleration is instantaneous and seemingly unending when in the higher-performance Sport Hybrid, Race Hybrid, or Hot Lap modes. In Hybrid mode, the 918 Spyder is still a very fast super sports car, but it's clear some of the car's performance is being kept in reserve. In E-Power mode, the silence of the drivetrain is broken only by a futuristic electric whirr, calming the driver into a more relaxed pace, as suits a completely electric car around town. In all, the experience from behind the wheel of the 918 Spyder is exactly what you'd expect of the most expensive, fastest Porsche built today--and yet it's also more impressive than you'd think, in how it all comes together seamlessly and fluidly.

Handling is a historical Porsche strength, and nowhere is this better evidenced than in the 918 Spyder. Despite weighing about 800 pounds more than the lightest of the Boxster and Cayman line, the 918 Spyder's mid-engine layout and brilliant powertrain make it feel much like its smaller sibling in terms of dynamics and balance. Steering is precise and crisp, though not as communicative as the rear-drive-only cars in the Porsche lineup, and the movement of the chassis is communicated perfectly to the driver through the seat. Controls are weighted just as you'd want for each driving mode, a more remarkable feat when you consider the braking system of the 918 Spyder is an energy recovery system as well as traditional hydraulic brakes--unlike many sporty hybrids, the brake pedal feel is consistent and predictable; that's something you truly appreciate when negotiating a track at speeds well over 150 mph.

Porsche says the 918 Spyder can lap the Nürburgring Nordschleife in just 6 minutes, 57 seconds, though it requires a brave and skilled driver. The 918 Spyder is in a very exclusive group under the seven-minute mark. Top speed in its most intense mode is greater than 211 mph, says Porsche, and the 918 can accelerate to 60 mph in less than 2.8 seconds. A seven-speed Porsche Doppelkupplung (PDK) transmission sends power to the rear axle; the forward electric motor drives the front wheels at a fixed ratio.

Even with this stunning performance, the 918 Spyder remains remarkably efficient thanks to that high-tech drivetrain: the EPA says it's good for 67 MPGe when used in hybrid-electric mode, though that figure drops to 22 mpg on gasoline only--which is still a fair figure for a supercar.

Despite its high-tech drivetrain and abundant equipment, the 918 Spyder weighs in at 3,715 pounds in standard trim, or as little as 3,616 pounds with the optional Weissach package. A carbon fiber reinforced polymer primary structure and extensive use of aluminum and composites throughout the vehicle help the Spyder keep its weight low. Weight distribution--a key attribute in determining handling balance--sits at 57 percent on the rear axle and 43 percent on the front. The 918 Spyder's center of gravity is approximately at the height of the wheel hubs, which should make for truly impressive traction with minimal body roll.

Only 918 examples of the Porsche 918 Spyder will be built for customer purchase, and at a starting price of $845,000, it will be a very exclusive super sports car. The production version of the 918 Spyder was unveiled at the 2013 Frankfurt auto show, and is on sale now.

Be the first one to write a review on 2015 Porsche 918 Spyder
Rate and Review your car for The Car Connection! Tell us your own ratings for a vehicle you own. Rate your car on Performance, Safety, Features and more.
Write a Review
Browse Used Listings
in your area
8.8
Overall
Expert Rating
Rating breakdown on a scale of 1 to 10?
Looking for a different year of the Porsche 918 Spyder?
Read reviews & get prices
The Car Connection Daily Headlines