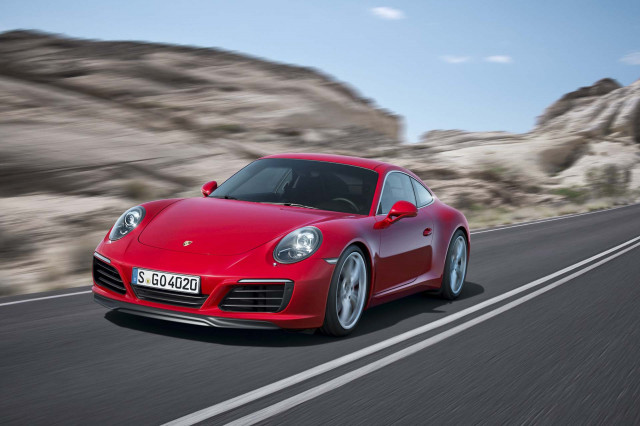 There are myriad ways to build a perfect Porsche 911, and we suggest just one option that’s low in the funnel: Sport Chrono. Imaginations can run wild from there.

The 2019 Porsche 911 is a legendary sports car that serves as the benchmark for performance and comfort.

There’s a new version on the way soon, but the 2019 Porsche 911 is here to bide time and burn money.

The 911 hasn’t changed since last year, ahead of a full-scale redesign for the 2020 model year. It’s offered in base Carrera, Carrera S, GTS, Turbo, Turbo S, GT3, and GT2 powertrain configurations. All-wheel drive is available on most configurations, and convertible versions are scattered throughout. All offer a 7-speed dual-clutch automatic, and many offer a 7-speed manual. There are a handful of special editions to consider too: Carrera T (base power, but lighter), GT3 RS (less weight), GT3 Touring (no wing), etc.

One of the common threads throughout the lineup: the 911’s iconic shape. Porsche purists can spot the differences, but to many eyes, it just looks good. Inside, the 991-generation 911s are classy and modern, without being over the top. A 6.5-inch touchscreen sits in the middle of the cockpit and the Porsche binnacle is retro-modern—and cool.

Power outputs vary among the 911 lineup from 370 to 690 horsepower. All are flat-6 engines with more than 3.0 liters of displacement. Base Carreras offer 370 hp, Carrera S versions get 420 hp, GTS versions get 450 hp, Turbo and Turbo S models do with 540 and 580 hp, respectively. None of the 911s feel underpowered and all handle spectacularly.

We can think of one thing that a Porsche 911 doesn’t handle very well, however: more than two people. The rear seats may as well be painted on, or considered cargo shelves at any rate. The standard seats are comfortable and supportive—top versions get 18-way adjustable sport buckets that are among the best in the business.

Base Carrera coupes cost more than $92,000 and the ultra-rare GT2 RS approaches $300,000—naturally, there are many stops between the two.

Porsche option packages are a science: Owners spend days, weeks, or months perfecting their builds, and there are enough unique options to ensure that no two cars leave the factory alike.

The Porsche 911 is an icon and unmistakable.

Death, taxes, and the Porsche 911. Few things in the world are as constant as all three.

The Porsche 911’s basic shape hasn’t changed much in the decades it’s been on sale—it’s not changing much next year.

This year’s car gets a 6 for style because the proportions are all there—even if the effort isn’t. (Read more about how we rate cars.)

The 911s on dealer lots now were last refreshed in 2017, when Porsche slightly modified the rear taillights and other elements to help the car look lower and wider.

Inside, the 911 is up-to-date with plenty of leather and tech—but it’s not overwhelming. Porsche’s judicious use of digital screens will help those cars age better, we say.

The 2019 Porsche 911’s performance is perfect, regardless of model.

The 2019 Porsche 911’s performance is perfect regardless of how much you spend.

That applies to base cars, turbo cars, GTS cars—whatever. (Read more about how we rate cars.)

The outgoing 911 offers more variants than the incoming car, which arrives in the summer. That’s typical Porsche, but Carrera and Carrera S shoppers should know that an updated powertrain is on the way soon.

The 2019 911 is available in base, S, GTS, Turbo, Turbo S, GT3, and GT2 power configurations that range from 370 to 690 hp. The common thread: They’re all flat-6 engines placed rearward of the back tires. Most configurations offer a 7-speed manual transmission and all offer a 7-speed dual-clutch automatic. All-wheel drive is available on most cars.

The base Carrera and Carrera T offers 370 hp and 331 pound-feet of torque from their turbocharged flat-6 engines that propels the cars up to 60 mph in 4.0 seconds. From there Carrera S models boast 420 hp and sprint up to 60 mph in 3.7 seconds when equipped with the automatic transmission, which Porsche calls PDK. (Don’t ask us what it stands for, it’s 21 letters long.)

The Carrera GTS offers 450 hp and active exhaust (among other goodies) that pipes in Porsche’s six-piece orchestra well.

From there, the Porsche Turbo and Turbo S send the power output to the troposphere with 540 and 580 hp, respectively, from their 3.8-liter turbocharged flat-6s. Those versions are PDK only, but no less fun. They sprint up to 60 mph in around three seconds, but it’s their long-legged speed and comfort that makes them superlative grand touring cars.

Harder, quicker Porsches are available, too.

The GT3 is a race-ready, naturally aspirated champion with its 3.8-liter flat-6. (GT3 Touring models skip the rear wing, if that’s your thing.) The GT2’s turbocharged, 690-hp flat-6 gets all the honorifics: it’s a relative bargain at roughly $300,000 compared to the million-dollar hypercars it can compete with.

Predictably, all 911s are a thrill to drive, and despite the recent move toward turbochargers for most of the range (there are turbo Porsches and Porsche Turbos), there’s no hint of lag.

The 911s superb steering is carried throughout, too. Every car can tuck into a corner, regardless of who’s driving, and carry speed all the way to the next one. It’s thrilling and intoxicating. Active roll bars keep the 911 flat through the worst we’ve thrown at the sports cars.

Despite the 911’s capability on the track or in the twisties, it’s also comfortable and quiet on long-distance drives. (Well, most of them without “GT” affixed to their names.)

The 2019 Porsche 911 is luxurious and comfortable for two.

The 2019 Porsche 911 is supremely equipped for up to two people with exceptional materials and fit and finish. [Checks notes] It has four seats. Oh, boy.

Starting from an average score on our comfort scale, the Porsche 911 earns points above average for its front-seat accommodations and its fit and finish. We take those two back almost as quickly for a vestigial rear seat and very small cargo area. [Shrugs] It earns a 5. (Read more about how we rate cars.)

The front seats are comfortable and easy to get into. The base seats are eight-way adjustable, but most cars will be equipped with a package that upgrades those seats to slide, bend, dip, lower, push, pull, or flex in 14 or 18 directions. It’s the best kind of hug in Germany.

The rear seats are for in-laws. Or, perhaps it’s a cargo shelf?

(We’d suggest the latter but wouldn’t blame you for the former.)

The 911 offers only 5.1 cubic feet of cargo capacity on paper, but the rear seats offer 10 cubes more.

Regardless of trim level—base or $300,000 GT2 RS—the Porsche 911 is trimmed in exquisite materials that only get richer as the price goes up.

Despite its advanced materials, there are classic Porsche touches: the binnacle is classic 911, updated with a 4.6-inch digital information display, and the key still goes on the left.

The 2019 Porsche 911 hasn’t been rated for safety, and that probably won’t change. A new version is on the way, but federal and independent testers don’t usually test high-priced sports cars anyway. (Read more about how we rate cars.)

The 2019 911 features traction and stability control programs to keep the shiny side up, and passengers get a full complement of interior airbags, including side-impact airbags.

Outward vision in the coupes are typically good, and the sports car’s legendary maneuverability helps to avoid crashes in the first place.

Used Porsche 911 for sale near

Base cars that cost more than $92,000 are hardly spartan, though. They feature power-adjustable front seats, 19-inch wheels, a 6.5-inch touchscreen with Apple CarPlay compatibility, synthetic suede headliner, and eight-speaker audio.

There are myriad trim possibilities with the Porsche 911—its customization options are legendary and a gauntlet of temptation to raid bank accounts for that last, crucial item.

Many will consider a Premium Package add-on to some coupes or convertibles that adds 14-way adjustable heated front seats (or cooled seats in some models).

From there, it’s a rabbit hole of options that cost more money, including leather everywhere—we’re talking on the air vents, people.

Want to take some features away? That’ll cost more money too. The Carrera T is the purist’s pick—manual transmission, no frills, more money.

The 2019 Porsche 911’s fuel-economy report card has more entries than a overachieving college freshman, but the car lacks an real ace.

The most efficient 911 rings the bell at 25 mpg combined, but most fall short of that.

The base 911 coupe with an automatic transmission rates 22 mpg city, 30 highway, 25 combined. That’s good enough for a 5 on our fuel-economy scale, which means the two-seater is just average among new cars. At least as far as fuel economy goes. (Read more about how we rate cars.)

Opting for a manual transmission in the base coupe drops those ratings to 20/29/23 mpg.

Be the first one to write a review on 2019 Porsche 911
Rate and Review your car for The Car Connection! Tell us your own ratings for a vehicle you own. Rate your car on Performance, Safety, Features and more.
Write a Review
USED PRICE RANGE
$90,944 - $369,900
Browse Used Listings
in your area
7.0
Overall
Expert Rating
Rating breakdown on a scale of 1 to 10?
Compare the 2019 Porsche 911 against the competition
Compare All Cars
Looking for a different year of the Porsche 911?
Read reviews & get prices
Related Used Listings
Browse used listings in your area
The Car Connection Daily Headlines