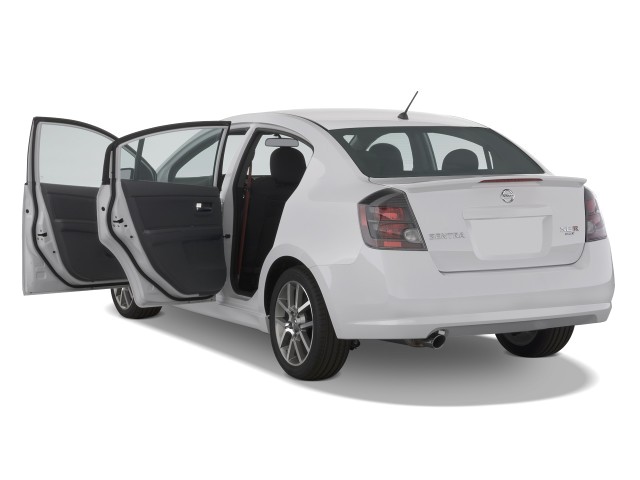 The subcompact and compact markets are crowded, so there are plenty of choices. Curiously, one of the Sentra's biggest competitors could be the smaller Nissan Versa, because it may be plenty large for many drivers. TheCarConnection.com also recommends that you drive a vehicle with a CVT before you buy it to make sure you'll acclimate yourself to this transmission's performance.

The 2008 Nissan Sentra is worth a drive, but its CVT may turn off some buyers.

TheCarConnection.com’s editors read the latest reviews on the new 2008 Nissan Sentra to write this comprehensive review. Experts from TheCarConnection.com also drove several different 2008 Sentra models, including the 2.0 L, SL, SE-R, and Spec V, and offer additional driving impressions and details to assist you in making the best choice in your next new car.

The 2008 Nissan Sentra is no longer Nissan's smallest car for sale in the U.S. market. For Nissan, 2008 is the year the company introduces the Versa into a slot below the Sentra, making the Sentra more of a compact than a subcompact.

The base 2008 Nissan Sentra makes a great high-value commuter car given its solid list of standard features, including six airbags. Anti-lock brakes are included on 2.0 S models, while the fancy 2.0 SL boasts a Bluetooth hands-free phone system and leather appointed seats. Unfortunately, the 2.0 SL also sticks you with Nissan's Xtronic CVT, which seems to cause engine drone. We'd rather drive the standard six-speed manual transmission that's available on the S.

Overall, the 2008 Nissan Sentra has sharp styling and a roomy, quiet interior. Because it only comes as a sedan, it suffers against competitors that offer other body styles (like the two-door Honda Civics). The Sentra gets good fuel economy from its peppy 140-horsepower 2.0-liter four-cylinder engine, but your driving experience can be dampened a bit by the CVT, and the suspension occasionally bobbles when you expect consistent responses.

Nissan offers higher-performance Sentra models: the SE-R and the Spec V. Both feature significant performance enhancements over lesser Sentra models because the SE-R and Spec V utilize 177- and 200-hp versions of the larger 2.5-liter four-cylinder found in the Nissan Altima sedan and Rouge crossover. Suspensions, brakes, and interiors of these Sentra performance models are also enhanced.

The 2008 Nissan Sentra doesn’t offer a two-door version, but the body is handsome and the interior logically laid out.

The 2008 Nissan Sentra is no longer Nissan's smallest car for sale in the U.S. market. For Nissan, 2008 is the year the company introduces the Versa into a slot below the Sentra, making the Sentra more of a compact than a subcompact.

Cars.com says, “The Sentra is a nice-looking car — young but not especially daring.” They say the sporty Sentra SE-R Spec V has "some very handsome exterior trim that says, but doesn't shout, performance." Motor Trend thinks it’s “like an IKEA appliance, attractive, modern, and perhaps just the furniture for your life”—but also adds, “The new Sentra copies some of big-brother Altima's styling, especially its roofline/greenhouse, but by now it also looks like a Saturn Ion or Mazda3.”

TheCarConnection.com’s editors have driven the Sentra and the sporty SE-R versions—and find the styling sharp and the interior fairly high-quality. Where the Nissan 2008 Sentra suffers is in having one body style. While the Sentra is four-door only, the competition—the Honda Civic, Ford Focus, and Saturn Astra—all are available with fewer doors. The lack of a two-door version may make the Sentra seem less sporty to some reviewers.

The 2008 Nissan Sentra is a pleasant, if uninspiring car to drive in its base version. More interesting are the SE-R and Spec V versions, which offer more horsepower and tighter suspension tuning. But even in those versions, reviewers felt the Sentra should deliver better handling.

The 2008 Nissan Sentra comes with either a "140-horsepower, 2.0-liter four-cylinder" or a "2.5-liter four-cylinder that generates 177 hp." In the Spec V, the same engine “produces 200 hp…due to modified intake and exhaust, a higher compression ratio and a higher redline of 6,800 rpm, among other tweaks." ConsumerGuide has lukewarm praise for the engine in this Nissan; 2008’s "2.0 models have decent around-town power, but passing punch is lacking." Cars.com agrees, noting that "the power is more than workable, but the car's no rocket, despite horsepower and torque increases over the previous generation." The Spec V version, Edmunds says, “is particularly entertaining, as its engine combines a generous amount of low-end torque with a free-revving personality.”

Cars.com notes that in this Nissan, 2008 “sees the end of the base Sentra with the six-speed manual transmission." Most 2008 Nissan Sentra sedans come with a CVT that helps fuel economy but saps energy from the drivetrain. The six-speed manual offered in the SE-R Spec V is no wonder, either. ConsumerGuide says, "the manual suffers from imprecise shifter and clutch action," and Edmunds agrees: “unfortunately, the manual gearbox is awkward and unsatisfying to shift."

The 2008 Nissan Sentra seems to have the right priorities, but the wrong execution when it comes to handling. Motor Trend says, “Electric power steering is quick, with so-so feel,” while Cars.com feels the “electric power steering works well, with plenty of boost for parking but a firmer feel once you get moving.”

Motor Trend observes the ride quality and body control don’t make a sportscar out of this Nissan; 2008’s Sentra has stiff damping that “makes for a firm ride over road imperfections, but with moderate body roll in the corners, and the tires squeal for their lives when the car is pushed.” Cars.com likes “ride quality that's more comfortable than most compact cars'.” ConsumerGuide warns that "large bumps and rippled pavement bring about sloppy wheel patter and other unwanted motions." But MyRide says the ride is “soft and boring."

While not the best in class, the 2008 Nissan Sentra offers more headroom and a spacious cabin for drivers who are looking for a compact sedan at a low, low price.

One shining spot for the 2008 Nissan Sentra is the praise it received from reviewers regarding comfort.

Cars.com likes that "the Sentra stands taller than conventional compacts" and notes that this is "a trend that improves forward visibility as well as entry and exit by increasing the minimum seat height." ConsumerGuide agrees the 2008 Nissan Sentra is a “competent compact sedan with a number of upscale features."

Edmunds praises the seats in the Nissan; 2008 Sentras have "very spacious seating front and rear, [and the] straightforward control layout" and goes on to say, "all the controls are exactly where you'd expect them to be and storage areas are abundant in number and variety." Cars.com concurs, saying the "dashboard seems low and far forward, which gives the cabin an open, roomy feel."

Not all reviewer comments were positive, however. ConsumerGuide critiques the Sentra, saying Nissan’s "cabin makes good use of textured surfaces, but most plastics throughout the cabin are hard and unyielding." Further, "the few padded surfaces are either wafer thin or too hard to be comfortable for extended periods of time." MyRide agrees: "The interior [is] comfortable and quiet but not excellent or very innovative."

ConsumerGuide sums it up by saying of the 2008 Nissan Sentra, "Its cramped rear seat, budget-grade interior materials, and in 2.0 models, lackluster acceleration and handling, make Sentra less appealing than the Honda Civic or Nissan's own Versa."

The 2008 Nissan Sentra has a good array of standard safety features and scores well in crash tests, but doesn’t offer stability control.

The 2008 Nissan Sentra “earned five stars for front-occupant protection in side impacts and four stars for the rear," according to Edmunds.

Cars.com notes the standard equipment in this Nissan; 2008 Sentras "include standard a tire pressure monitoring system, side-impact airbags and active head restraints for the front seats." It also has "side curtain airbags [to] cover all the side windows," and "for 2008, anti-lock brakes become standard on the 2.0 S and the SL trim level, but remain optional on the Sentra 2.0."

Used Nissan Sentra for sale near

The Nissan 2008 Sentra offers some high-tech features that exceed the usual equipment in the compact class.

Experts at TheCarConnection.com are pleasantly surprised at the features offered by the 2008 Nissan Sentra.

For the sportier enthusiast, the Nissan 2008 Sentra SE-R trim offers "firmer suspension tuning, larger brakes, a lower body kit, cloth-upholstered sport seats, aluminum-trimmed pedals, and oil pressure and G-force gauges," according to Edmunds. Finally, the Spec V trim has "an even firmer and lowered suspension, even larger front brakes and additional interior enhancements," with a "sunroof and Rockford Fosgate stereo...optional on both SE-R models."

Cars.com indicates "The Sentra has a substantial list of upgraded and new features for 2008," including a driver's power window that is "now also one-touch up, not just down"; additionally, "the assist grips over the doors now fold flat." Cars.com also points out that "all of the regular Sentra trim levels now have brightly illuminated instruments, day and night, as standard equipment" and "XM Satellite Radio is standard on 2.0 SL models."

Edmunds finishes by mentioning that "ABS, cruise control and a security system become standard fare on 2.0 S" and the "luggage capacity is a respectable 13.1 cubic feet." One feature exclusive to the Spec V trim of the Nissan 2008 Sentra is "red front seatbelts" to match the red seatbelts of the SE-R models.

Be the first one to write a review on 2008 Nissan Sentra
Rate and Review your car for The Car Connection! Tell us your own ratings for a vehicle you own. Rate your car on Performance, Safety, Features and more.
Write a Review
USED PRICE RANGE
$5,871 - $9,899
Browse Used Listings
in your area
7.8
Overall
Expert Rating
Rating breakdown on a scale of 1 to 10?
Compare the 2008 Nissan Sentra against the competition
Compare All Cars
Looking for a different year of the Nissan Sentra?
Read reviews & get prices
Related Used Listings
Browse used listings in your area
See More Used
The Car Connection Daily Headlines