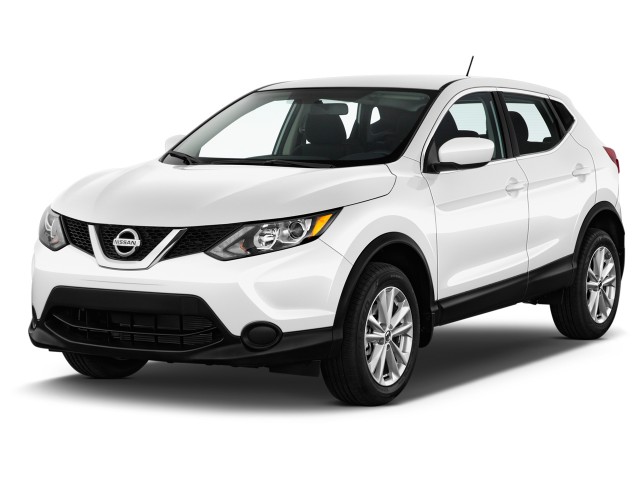 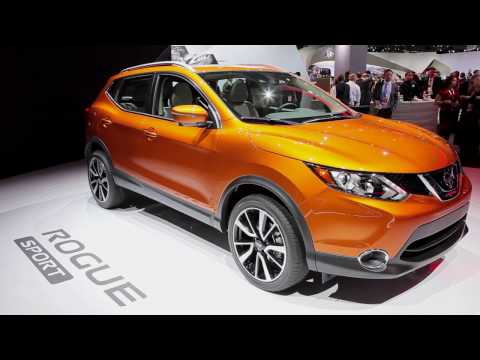 The 2017 Nissan Rogue Sport looks like a smart entry into the compact crossover segment, giving the automaker a two-prong approach to conquering buyers—even if it's not very sporty.

The new Rogue Sport is a foot shorter and almost 6 inches lower than the Rogue, and it’s intended for younger buyers who may not yet have a family—and for whom smaller dimensions make city parking easier. Three trim levels are offered: the base S, the mid-level SV, and the top SL; all-wheel drive is available as an option on all three.

Nissan suggests the competitors for the new Rogue Sport are the Honda HR-V, Hyundai Tucson, Kia Sportage, and Mazda CX-3. Reflecting the variety of approaches taken by carmakers to splitting the crossover utility vehicle segment more and more finely, others might include the Chevrolet Trax and the Toyota C-HR. Just to make things a bit more complicated, Nissan also sells an even smaller crossover as well, the aging Juke with its outré styling. It'll shortly be replaced by a new model previewed by the Kicks concept, but for the moment, the Rogue Sport is the freshest smallish SUV in the lineup.

We liked the Rogue Sport for its straightforward but well-made interior, its comfortable front seats, and its style. Design is important to the target audience, Nissan says, and its surveys indicate that despite their similar front ends, buyers see the Rouge Sport as a different, sportier, and better-looking car than the more family-oriented Rogue.

Drawbacks include the slow acceleration from its 140-horsepower 4-cylinder engine and continuously variable transmission, engine noise under full acceleration, and the limited rear-seat room (to be expected, granted).

We would also have liked a little more “sport” in a car called the Rogue Sport: it’s not that it handles badly, just that it’s entirely average on that score—and not all that much sportier, frankly, than the bigger Rogue.

Overall, we scored the 2017 Rogue Sport at 5.4 out of 10 points, slightly better than average. That score may rise soon, however, once safety data is available. (Read more about how we rate cars.)

The 2017 Nissan Rogue Sport looks like its sibling the Rogue from the front, but is sportier from other angles, and the interior is well-made and intuitive.

The 2017 Nissan Rogue Sport has most of the look of its big brother, the Rogue, but with a more truncated rear. It’s a mostly handsome shape but to our eyes not quite as coherent as the Rogue itself. The interior, however, is attractive and well-finished, and for that it gets an extra point to give it a score of 6 out of 10. (Read more about how we rate cars.)

The Rogue Sport has been adapted from the European Qashqai, which shares many of the underpinnings of the Rogue but is a foot shorter and about 6 inches lower. Nissan says all the body panels are unique to the Sport, but we found the front two-thirds of the car to be so Rogue-like we had a tough time telling one from the other unless they were parked side by side, when the Sport’s lower height was the giveaway.

Inside, however, the interior is lifted almost wholesale from the updated 2017 Rogue, and that’s a good thing. Our review of the bigger car called it “elegantly ordinary,” and that’s a fair assessment of the Rogue Sport as well. It has nice, intuitive round knobs for audio and climate control that frame the usual center stack with a touchscreen. It’s not wild, it doesn’t require numerous touches on the screen to make the controls work, and it has the right balance of style and function. We like it for that reason.

The 2017 Nissan Rogue Sport's handling is only average, not sporty, and it's on the slow side too.

The 2017 Nissan Rogue Sport comes with only a single powertrain, a 2.0-liter 4-cylinder engine paired to a continuously variable transmission (CVT), with front-wheel drive as standard but all-wheel drive available as an option on all trim levels.

We rate it at 4 points out of 10, docking it a point for its meager power. (Read more about how we rate cars.)

The engine puts out a weak 141 horsepower and 147 lb-ft of torque, almost 30 hp less than the larger Rogue’s 2.5-liter four. While that helps boost EPA fuel-economy ratings, the Rogue Sport is not a very quick vehicle. With curb weights of 3,200 to 3,400 pounds depending on the model, the power and torque figures just aren't enough to move the smaller Rogue expeditiously. Full-throttle acceleration is both slow and noisy, and its otherwise unobtrusive CVT spools the engine up to its maximum speeds to get the car moving faster.

While Nissan's CVTs are less annoying by far than in past year, the engine and transmission together belie the "Sport" in the Rogue Sport's name. The slowness, to be fair, is similar to that of several other small SUVs, including the competing Honda HR-V and Toyota C-HR. And the vehicle is quiet inside under most circumstances and on all but coarser pavement surfaces.

Perhaps as an offset, Nissan stresses that its new and smaller crossover offers more car-like handling than the larger Rogue. The difference isn’t huge, though, and the Rogue Sport remains far from sporty. It handles acceptably but is hardly a vehicle you’ll anticipate tossing around curvy back roads and hilly countryside. It's tuned to be what it is: an inoffensive, moderately stylish crossover that's intended for entry buyers more concerned with connectivity and the number of speakers than with performance and roadholding. Ten years ago, those same buyers opted for Nissan's mass-market sedans, which offered the same mix of qualities.

The 2017 Nissan Rogue Sport is comfortable and quiet for two, but adults in the rear seat have to bargain for leg room.

Like most of its competitors, the 2017 Nissan Rogue Sport is considerably quieter than utility vehicles of even five years ago. Close the doors with the engine on and you’ll immediately notice a major difference.

The relatively low-profile tires on the top-end Rogue Sport SL model’s standard 19-inch alloy wheels seemed noisy on most road surfaces, which the quiet engine only highlighted. It’s not a deal-breaker, but it was noticeable in a car with a sticker price of more than $30,000. As usual, we suspect that the 16-inch steel wheels on the base S model or the 17-inch alloys on the mid-level SV, both carrying tires with taller sidewalls, would be quieter. The Rogue Sport is tuned more for comfort than sporty handling, and ride quality was good.

The front seats are comfortable, though even on the top SL version, only the driver’s side offered power adjustment. As befits a small SUV that’s a foot shorter overall than the Rogue, the Rogue Sport’s back seat doesn’t offer the surprisingly large leg room available in the larger vehicle. Four adults can travel comfortably, but back-seat riders will have to bargain with those up front for adequate leg room.

Inside, the Rogue Sport is all but identical to the larger Rogue, meaning its interior materials are a mix of hard, softer, and fully soft-touch plastics. We found the all-black interior dark, but the upholstery can be ordered in a lighter color. Cargo volume behind the rear seat is 22.9 cubic feet, or up to 61.1 cubic feet with the rear seat folded down. While that’s considerably less than the larger Rogue, which offers 9 cubic feet more in both dimensions, the Rogue Sport retains the clever two-part, two-level adjustable false-floor panels that can hold bags in place or hide valuables under the load floor.

Still, the Rogue Sport offers less interior flexibility than the Honda HR-V, with its ingenious “Magic Seat” that folds several ways to provide a huge, flat-floored cargo space more like a moving van.

In the end, the Rogue Sport rates an average 5 out of 10 for its interior. (Read more about how we rate cars.)

The 2017 Nissan Rogue Sport hasn't yet been crash-tested by the NHTSA or IIHS, though its Rogue big brother gets good ratings.

Neither the NHTSA nor the IIHS has yet rated the Nissan Rogue Sport for crash safety. For that reason, we can’t currently give it a Safety rating. (Read more about how we rate cars.)

While it shares some underpinnings and an interior with the larger Nissan Rogue, Nissan says that every body panel differs and the two utilities’ heights and dimensions differ. It’s likely that the smaller Rogue Sport may be tested by one or both agencies in the future. The Rogue itself has been rated a Top Safety Pick+ by the IIHS and received the top rating of Good in every category. It received 4 stars out of 5 overall from the NHTSA.

Those features are bundled into a pair of option packages, with the mid-level Rogue Sport SV offering only the forward-collision warnings and automatic emergency braking and blind-spot monitors as part of the $1,500 Platinum Package. To get the full suite of active-safety systems, buyers have to opt for the top-level Rogue Sport SL and then add the Platinum or Premium Packages, at $570 or $2,280 respectively.

The base 2017 Nissan Rogue Sport is quite stripped down, and only the very highest trim level makes all the active-safety features available.

Three trim levels are offered on the Nissan Rogue Sport: the base S, the mid-level SV that will likely be the most popular, and the top SL version.

All Rogue Sports come standard with a 12-volt outlet, a digital information panel between the tachometer and speedometer, a rearview camera, and cruise control. The base Rogue Sport S comes with steel wheels and wheel covers, a manually adjustable driver's seat, a 5.0-inch infotainment display, and cloth upholstery.

Move up to the volume Rogue Sport SV model, and you get 17-inch alloy wheels, power-adjustable driver's seat, dual-zone automatic climate control, keyless ignition, and a variety of appearance items.

At the top of the heap is the Rogue Sport SL version, which adds 19-inch alloy wheels, leather-trimmed interior, Nissan Connect mobile services and apps, a surround-view camera system, and remote start. Options on the SL include a power moonroof, LED headlights, and an expanded bundle of safety systems.

Options at various trim levels include premium paint colors, an all-weather package, and a number of appearance items and trim embellishments. By far the priciest options are the Platinum packages for the mid-level SV and top-level SL trims, which bundle those various active-safety systems into a single option.

Because the base model is surprisingly stripped down for a vehicle costing more than $22,000, the active-safety equipment isn’t standard, and the full array of safety features is available only on the priciest trim level, we deducted one point. The Rogue Sport earns one point for its infotainment system, bringing the overall total to 5 out of 10. (Read more about how we rate cars.) A fully optioned top-level model will run slightly more than $30,000, including destination fee.

The 2017 Nissan Rogue Sport gets about average EPA fuel-economy ratings.

The EPA rates the front-wheel-drive version of the Nissan Rogue Sport at 25 mpg city, 32 highway, 28 combined, and the all-wheel-drive model at 24/30/27 mpg.

That gives it a rating of 7 out of a possible 10 on our green scale. (Read more about how we rate cars.)

That’s about average for small crossovers, and not as high as those of the Honda HR-V and Mazda CX-3, two of the more efficient non-hybrids in the category, at 29 combined and 31 combined for AWD and front-wheel-drive versions respectively.

Buyers who want a Nissan crossover with the highest fuel economy, however, should go for the Rogue Hybrid, at 34 mpg combined (FWD) or 33 mpg (AWD).

3 Reviews
5 star
67%
4 star
3 star
2 star
33%
1 star
Rate and Review your car for The Car Connection! Tell us your own ratings for a vehicle you own. Rate your car on Performance, Safety, Features and more.
Write a Review
For 2017 Nissan Rogue Sport

Everything I expected in an AWD and more!

Good value in a delightful auto.

Think before you purchase this vehicle.