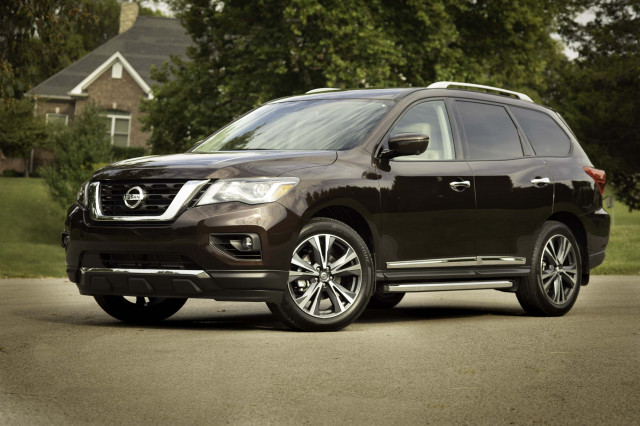 For about $37,000, the 2019 Nissan Pathfinder SV with all-wheel drive is well-equipped for family duty.

The 2019 Nissan Pathfinder has value and interior flexibility as its assets, but this crossover SUV is ripe for a redesign.

Forget its rugged heritage. The only path the 2019 Nissan Pathfinder plans to trudge is the carpool line. And that’s just fine. This big, three-row crossover SUV has a comfortable interior with a versatile second row and lots standard of active safety tech.

Its competitors have surpassed it in many ways, but the Pathfinder still rates 6.2 out of 10 for its balance between value and utility. (Read more about how we rate cars.)

The 2019 Pathfinder sees more democratization of its most advanced safety tech this year. Rear parking sensors are now standard on the base S trim, while the popular SV can now be had with adaptive cruise control, blind-spot monitors, and rear cross-traffic alerts. The SL and Platinum trims carry over.

Regardless of what badge is affixed to the Pathfinder’s bulbous tailgate, a 3.5-liter V-6 engine paired to a continuously variable automatic transmission (CVT) sits underhood. The V-6 provides good, if loud acceleration and its CVT behaves well enough. Front-wheel drive is standard and all-wheel drive is optional for about $1,700. With all-wheel drive, the Pathfinder is rated at 22 mpg—about average for a three-row crossover SUV.

In the past Nissan sold a hybrid Pathfinder, but it's long since been discontinued.

Light steering and a soft ride make the Pathfinder far from the driver’s crossover, but it is easy to park and quiet on the highway. Its all-wheel-drive system has off-road modes, but they’re more for show on this low-riding crossover SUV with street-oriented tires.

The Pathfinder’s curves continue inside, where its 8.0-inch touchscreen for infotainment takes up center stage with more buttons and knobs below than in most rivals. We’re fine with the buttons, but less enthused about the lack of Apple CarPlay and Android Auto compatibility.

The Pathfinder’s big footprint endows it with good cargo utility, albeit a higher load floor than some competitors.

Though the Pathfinder has a good array of active safety tech, its crash test scores have a few blemishes. Poor headlights hold the crossover SUV back from an award from the IIHS and the NHTSA noted a concerning four-star frontal crash rating.

It’s worth noting that the Pathfinder is the basis for the much costlier Infiniti QX60. The two share the same basic shape inside and out, a powertrain, and many features.

The 2019 Nissan Pathfinder doesn’t draw shoppers into showrooms for its styling.

Crossover SUVs aren’t noted for their sexy lines, and the 2019 Nissan Pathfinder is no exception. We rate it at 5 out of 10 because we figure it’s the baseline for three-row family hauler styling. (Read more about how we rate cars.)

When it was redesigned for the 2013 model year, the Pathfinder shed its trucky looks (and rugged underpinnings) in favor of sculpted, curvy sheet metal that’s more at home in front of Kroger than on a remote trail. Its car-like front end gives way to broad fenders that wrap around 18-inch wheels on most versions. Pathfinder SL and Platinum trims are available with 20-inch wheels, a clear reminder that this crossover SUV goes down pavement paths.

Inside, the Pathfinder looks a lot like its Infiniti QX60 cousin—that’s good news for Nissan shoppers. Its dashboard is simple, with a mix between curvy shapes and blocky, vertical controls. An 8.0-inch touchscreen for infotainment sits high on the dash flanked by climate control vents with nearly 20 buttons and a big chrome knob below. The buttons can overwhelm at first, but they offer better access to myriad audio and optional navigation controls than some menu-intensive infotainment systems.

Most Pathfinders have shiny black interior trim, but the matte-finish faux wood on higher trims has a dressy look.

The 2019 Nissan Pathfinder emphasizes crossover and not SUV. Its soft ride earns it a point above average, bringing it to a 6 out of 10 on our scale. (Read more about how we rate cars.)

Under the Pathfinder’s hood sits a 3.5-liter V-6 engine rated at 284 horsepower and 259 pound-feet of torque. The V-6’s horsepower figure is above average for a three-row crossover, but its so-so torque figure means that the throttle needs to be buried for good acceleration. The continuously variable automatic transmission (CVT) works well, but is only so effective at masking the V-6’s occasionally gruff nature.

The Pathfinder’s steering is light and accurate, but particularly informative. This hefty crossover SUV leans into corners thanks to a suspension tuned more for comfort than for handling prowess. Pathfinder SL and Platinum trims can be fitted with 20-inch wheels that have little effect on ride quality and steering response. At highway speeds, the Pathfinder tracks well and is reasonably quiet.

Nissan says that the Pathfinder can tow up to 6,000 pounds—that’s more than most crossover SUV rivals.

Behind the CVT gear lever sits a control knob with traction control modes for sticky situations. With just 7.0 inches of ground clearance, the Pathfinder sits only slightly higher off the ground than a minivan and thus isn’t suited to serious explorations. We’ve found its all-wheel-drive system to provide good wintry weather traction, although the relatively narrow tires can make it a handful in deep snow. Proper winter tires are a good bet for anyone who regularly sees snow, however.

The 2019 Nissan Pathfinder has comfortable seats and a trick second row that slides forward for good third-row access.

The 2019 Nissan Pathfinder may not be as spacious as some rivals, but its interior has some smart touches that make family hauling easy. We rate it at 8 out of 10, giving it points above average for its comfortable front seats, a versatile second row, and its ability to haul plenty of cargo. (Read more about how we rate cars.)

The base Pathfinder has a manually adjustable driver’s seat, but SV and higher trims have 8-way power adjustment. A power-adjustable passenger’s seat comes on SL and Platinum trims, but it’s not height-adjustable. Regardless of adjustment, the Pathfinder’s seats are comfortable up front, with good lower cushion support.

Wide rear door openings reveal a spacious second row that reclines and slides fore and aft to open up more cargo or third-row space. The second row slides forward for above average access to row three. Conveniently, parents can leave a child’s seat in place in the second row when it is slid forward. Second-row captain’s chairs aren’t on the Pathfinder’s options list.

Row three is best for kids, but at least Nissan didn’t try to squeeze in three seatbelts where only two children can fit.

The Pathfinder’s cargo floor is about 31.5 inches off the ground, slightly higher than some rivals. Behind the third row, it can hold 16.2 cubic feet of goods. With row three folded flat, that figure grows to 47.4 cubes. The Pathfinder’s maximum cargo-carrying capacity is almost 80 cubic feet.

Small item cargo storage isn’t as plentiful as in some competitors, but the Pathfinder has good cupholders and standard USB Type A and Type C ports scattered about.

The 2019 Nissan Pathfinder earns average crash-test scores, but it's equipped with a fair amount of active safety gear.

We give it a point for standard automatic emergency braking and another for a five-star NHTSA rating, which brings it to a 7 out of 10. (Read more about how we rate cars.)

This year, Nissan made adaptive cruise control and blind-spot monitors standard on SV and higher trims. No active lane control is available, something found on most of the Pathfinder’s competitors.

The IIHS said that the Pathfinder earned “Good” results in most crash tests. An “Acceptable” score for the passenger’s side small-overlap frontal crash test, which simulates impact with an object such as a utility pole, revealed a slight discrepancy in the way the Pathfinder handles impacts versus the “Good” driver’s side score.

Additionally, the IIHS said that the Pathfinder’s standard halogen headlights provide “Poor” coverage, while even the optional LED headlights on SL and Platinum trims are just “Acceptable.”

The NHTSA rated the 2019 Pathfinder at five stars overall, but it said the crossover SUV earned four stars for side impact and four in the calculated rollover test.

Used Nissan Pathfinder for sale near

The 2019 Nissan Pathfinder lacks a few tech features, but it’s a good value.

For about $32,200, the base 2019 Nissan Pathfinder S undercuts many of its rivals while providing most of the features families seek in a three-row crossover SUV.

It gets a point above average for its overall value and another for its big infotainment screen, bringing it to a 7 out of 10 on our scale. (Read more about how we rate cars.)

We’d still spend up to the Pathfinder SV, which for about $3,000 more adds adaptive cruise control, blind-spot monitors, a power driver’s seat, keyless ignition, an integrated garage door opener, and a handful of smaller features. Heated seats and a heated steering wheel are optional for $400.

The Pathfinder SL adds leather upholstery, heated seats and steering wheel, navigation, and a surround-view camera system. But at about $39,000, it’s a tough sell against some rivals that are priced about the same.

As big as the Pathfinder’s 8.0-inch touchscreen is, its software can be clunky to sort through and it lacks the Apple CarPlay and Android Auto compatibility found in most competitors.

The 2019 Nissan Pathfinder’s fuel economy is par for a three-row crossover SUV.

The 2019 Nissan Pathfinder is no longer available as a hybrid, but the standard model’s fuel economy isn’t bad.

With all-wheel drive, the Pathfinder S, SV, and SL trims are estimated by the EPA to achieve 19 mpg city, 26 highway, 22 combined. The 20-inch wheels on the Platinum trim—optional on the SL—bump those figures slightly to 19/26/21 mpg due to their higher rolling resistance.

Front-wheel-drive Pathfinders, regardless of trim level, come in at 20/27/23 mpg on the EPA’s test.

Those figures are slightly ahead of the Chevrolet Traverse but a little worse than the Toyota Highlander.

Be the first one to write a review on 2019 Nissan Pathfinder
Rate and Review your car for The Car Connection! Tell us your own ratings for a vehicle you own. Rate your car on Performance, Safety, Features and more.
Write a Review
USED PRICE RANGE
$17,075 - $41,990
Browse Used Listings
in your area
6.2
Overall
Expert Rating
Rating breakdown on a scale of 1 to 10?
Compare the 2019 Nissan Pathfinder against the competition
Compare All Cars
Looking for a different year of the Nissan Pathfinder?
Read reviews & get prices
Related Used Listings
Browse used listings in your area
See More Used
The Car Connection Daily Headlines