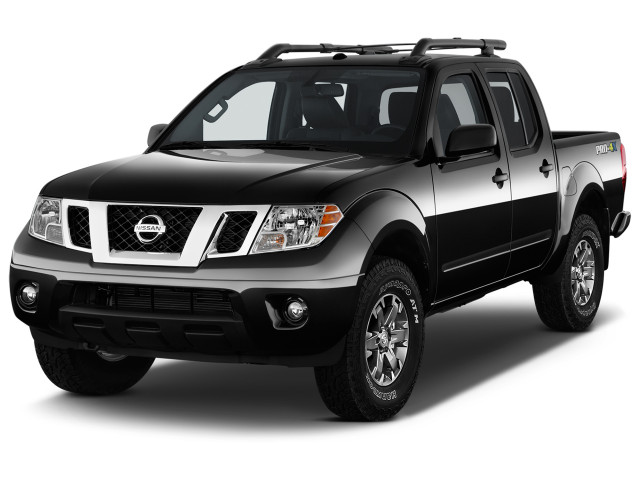 The V-6-equipped Nissan Frontier SV should be where most shoppers start. It’s a good value and offers popular equipment.

The 2019 Nissan Frontier is an endearing, affordable mid-size truck that lacks the flash of competitors—we like that.

The 2019 Nissan Frontier is almost so retro that it’s cool. Almost.

The smallest pickup truck offered by Nissan is now among the “oldest” new cars on the road today. The same basic shape and structure that underpins the 2019 Frontier is old enough to earn its own learner’s permit.

That bodes well for value, but it doesn’t do much on our overall scale. It earns a 3.7. (Read more about how we rate cars.)

Like last year—and many previous years—the 2019 Nissan Frontier is available in S, SV, Desert Runner, SL, and Pro-4X trim levels. An extended cab with a 6-foot bed is standard, but a four-door crew cab with a shorter bed is more common.

Nissan’s basic shape for the Frontier hasn’t changed much, which we don’t mind. We do mind about the interior—it’s just dated.

Under the hood is a base, forgettable inline-4 that makes 152 horsepower and struggles with anything more than rear-wheel drive and a light lunch. The strong 4.0-liter V-6 is more common, and for good reason: its 261 hp is enough to chirp the wheels and tow more than 6,500 pounds. The ride is predictably bouncy, but the Nissan’s old-school steering and gumption are enough to overcome the loud powertrain.

The Nissan Frontier’s budget roots show in the cabin and comfort, which are below average for new cars now. The front seat is fine, but the rear seats are upright and stiff. We don’t advise many humans to ride in the rear of extended-cab versions. It’s just too small.

The Frontier is more than 15 years old, so it's difficult to assess its safety since there are no recent crash-test scores.

Base trucks are true strippers: manual windows, manual transmission, manual locks, cloth seats, and steel wheels. A few items, such as a 7.0-inch touchscreen, rearview camera, and Bluetooth connectivity are included for economy of scale on those trucks, we suppose. For not much more than the base truck’s sub-$20,000 entry price, a Nissan Frontier SV is equipped with alloy wheels, power features, upgraded cloth, and keyless entry. A small package adds a lot of value, including a spray-in bedliner, upgraded audio, tailgate extender, and more.

No amount of money adds advanced safety tech or good fuel economy. Most Frontiers will manage combined mileage in the mid-teens, which is on par with some full-sizers.

The Nissan Frontier’s look is starting to blend in to the surroundings by now.

The 2019 Frontier is new, and instantly familiar, like a pair of chucks in the box. Like the shoes, Frontier is best matched with dusty jeans and T-shirt—not Brooks Brothers, please—with a well-worn ballcap.

Saying that, it’s not exactly stylish. We generously call the exterior average but ding it a point for an interior that’s anything but generous. It gets a 4 for style. (Read more about how we rate cars.)

This year the Frontier looks identical to the year before—and many others.

With a chunky exterior, including bulky fenders and wide headlights, we’ve been looking at the small Nissan truck for so long that we’ve become fluent in Frontier—we don’t notice the difference any more.

The bumper is carved in for better approach angles, and Pro-4X and Desert Runner trims dial down the chrome. The Frontier’s roof rack isn’t a good look, and it sounds worse from in the cabin.

Inside, the Frontier is a little gangly by modern standards. It’s a sea of plastic with a handful of storage bins scattered throughout the cabin for storage, or by accident, we can’t tell.

The 2019 Nissan Frontier equipped with a V-6 impresses in its performance.

The 2019 Nissan Frontier games our system and we’re fine with it.

The most popular 4.0-liter V-6 is lovable and gruff, with enough grunt to satisfy our needs—even if it drains our wallets with poor fuel economy.

Its ride is busy—almost unnecessary so—but top trim Pro-4X versions are a blast off road. It works its way back to a 4 out of 10 for performance on our scale. (Read more about how we rate cars.)

The base engine is a 2.5-liter inline-4 that’s best kept for rear-drive pickups, and work ones at that. It offers 152 horsepower and 171 pound-feet of torque for lowlanders. The 6-speed manual is the best option for the busy inline-4, but a 5-speed automatic is available. The inline-4 is loud and overmatched by the Frontier’s two-ton weight.

A better option is the 4.0-liter V-6 rated at 261 hp and 281 lb-ft of torque—many Frontier shoppers will only consider this engine and we couldn’t agree more. It’s not very refined, but neither are tractor motors and they still get the job done. The Frontier’s V-6 fusses at idle and it sounds like a small galaxy being born when it revs, but it provides plenty of passing power and can spin up the rears with an empty load—it’s that tough.

The standard transmission is a long-shifting 6-speed that we like. The clutch is appropriately stiff for a truck and the manual is widely available among many V-6 trims. The optional 5-speed automatic is a decent pick and fires off predictable shifts, but we think it’s missing the point.

The Frontier has firm and precise tiller that doesn’t wander at highway speeds. The ride is predictably choppy for a short wheelbase pickup, but not overly harsh. On long distances, though, the Frontier will need more corrections than a puppy in training.

The good news is that off road, the pickup is far more surefooted. The off-road oriented Pro-4X is a veritable mountain when the road turns ragged and the Frontier’s part-time four-wheel drive system handles it well (it’s not meant to be used on dry pavement). The Pro-4X features a locking rear differential for extreme cases.

The 2019 Nissan Frontier is many things, but comfortable and spacious aren’t two.

With an open bed and a low price, the 2019 Nissan Frontier is a great way to find many new friends, many of whom will need your help moving this weekend.

Your new friends may feel differently if you ask them to sit in the backseat—it’s less comfortable than Catholic Mass with a hangover. The front row isn’t much better and the Frontier’s budget materials aren’t just visible, they’re a way of life for the small Nissan truck.

The Frontier earns a 4 for comfort. (Read more about how we rate cars.)

In base S and SV trims, the driver’s seat lacks height adjustment and both front seats aren’t very comfortable for long hauls. Outward vision is generally good, but tall drivers may have to crane their necks to see high objects nearby.

Crew cabs are more popular, but the rear seats are not much more comfortable—they’re lightly padded and upright.

The business end of the Frontier is the business end. Behind King Cabs there’s a 73.3-inch bed. Crew cabs pick between the long bed or a shorter 59.5-inch bed. A spray-in bedliner is standard only on Pro-4X versions, and optional everywhere else. Tough tie-downs are available to make the bed more versatile.

Inside, the Frontier is awash with hard plastics that are inconsistently grained. We wouldn’t mind them in in trucks that cost in the low- to mid-$20,000s, but on high-buck trucks that cost nearly $40,000, it’s a tough sell.

The 2019 Nissan Frontier rates 2 out of 10 on our scale for its subpar safety record. Only decent outward vision prevents it from scoring just 1 out of 10. (Read more about how we rate cars.)

The Nissan Frontier doesn’t predate safety, but it does predate many safety features. As a result, there’s no available active safety features including automatic emergency braking, active lane control, or blind-spot monitors. The Frontier is equipped with required safety features such as airbags, traction control, stability control, and a rearview camera.

The IIHS has tested the Frontier for crashworthiness and the results are mixed.

The Frontier earned top “Good” scores on all crash tests except the small overlap crash test, which simulates hitting a tree or telephone pole, where it earned a “Marginal” rating. The Frontier’s head restraints rated as “Acceptable” and the standard halogen headlights were rated “Poor.”

Base versions of the Frontier lack some necessities; a little bit more money goes a long way, though.

It’s hard for inexpensive cars or base pickups to do well on our features score. Guess how well an inexpensive, base pickup will do?

The 2019 Nissan Frontier is unchanged from the year before it—including the price.

For less than $20,000, the 2019 Frontier S is equipped with a 7.0-inch display for infotainment, Bluetooth connectivity, four wheels—six if you count the steering wheel and spare tire—and not much else. Power locks and windows are an option, same with a bedliner. It’s not exceptional, but it is a value among pickups. (Just skip the $4,070 option for an automatic transmission, for many reasons.)

Starting from a base score, the Frontier earns points for its good overall value and base infotainment system. It loses points in its lack of customization and poor base features. It’s a wash at 5. (Read more about how we rate cars.)

The top trim is a Frontier SL with leather seats, navigation, and premium audio. For more than $37,000, we just don’t see the point.

The 2019 Nissan Frontier is a small pickup with a big thirst.

Most version will only manage combined mileage in the high-teens with a V-6 and four-wheel drive. That’s good enough for a 3 on our scale. (Read more about how we rate cars.)

It’s possible to do better, but not much.

The base Frontier with an inline-4, rear-wheel drive, and 5-speed manual transmission is the most frugal at 19 mpg city, 23 highway, 21 combined, according to the EPA. Swapping in an automatic transmission dents that to 17/22/19 mpg.

Most Frontiers will be equipped with a 4.0-liter V-6 that drinks like a V-8. The most frugal version is the V-6 with a manual transmission: 16/22/19 mpg. That’s comparable to several full-sizers.

Be the first one to write a review on 2019 Nissan Frontier
Rate and Review your car for The Car Connection! Tell us your own ratings for a vehicle you own. Rate your car on Performance, Safety, Features and more.
Write a Review
USED PRICE RANGE
$20,995 - $39,999
Browse Used Listings
in your area
3.7
Overall
Expert Rating
Rating breakdown on a scale of 1 to 10?
Compare the 2019 Nissan Frontier against the competition
Compare All Cars
Looking for a different year of the Nissan Frontier?
Read reviews & get prices
Related Used Listings
Browse used listings in your area
The Car Connection Daily Headlines