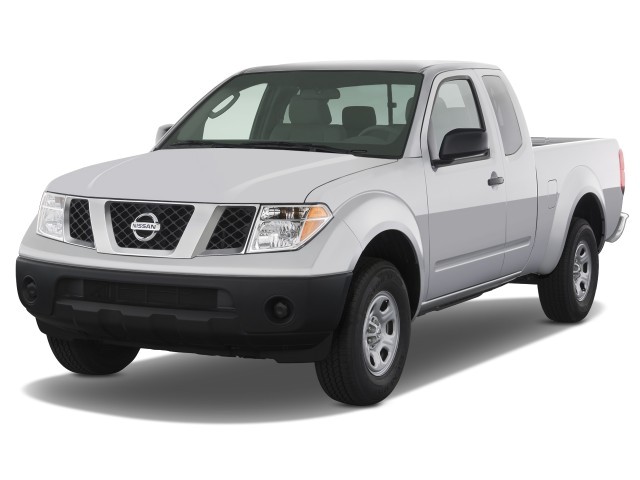 The 2008 Nissan Frontier comes in such a wide range of body styles, drivetrains, and tunings, it's good to know what you need before you enter the showroom. Generally, if you're looking for a work truck, the four-cylinder versions perform well enough, but you'll need to order extra safety equipment; personal trucks such as the midrange LE can be dolled up with goodies, including Bluetooth and XM. Off-road purists don't need to look any further than the hardcore NISMO Frontier.

For those of us who don't live on a ranch, the 2008 Nissan Frontier is large enough to haul real people and cargo, but sized for the urban-congestion reality.

The truck enthusiasts at TheCarConnection.com researched a wide range of road tests of the 2008 Nissan Frontier to put together this comprehensive review. TheCarConnection.com's editors also drove the Nissan Frontier to help you decide which reviews to trust where opinions differ, as well as to add more impressions and details that provide you with the best information available.

The 2008 Nissan Frontier pickup is derived from the same frame as the larger Nissan Titan. It's not full-size, but it's more properly thought of as a mid-size truck, since it isn't quite as small as the old Nissan truck or the Ford Ranger.

The style is a good mix of straight struck lines and some carlike curves around the large chrome-bar grille and at the lower edge of the side-rear windows. Grey plastic and orange markings trim the interior, and though the plastics and fabrics look inexpensive, the design is straightforward and logical.

Two engines are offered on the 2008 Nissan Frontier. The optionally available 4.0-liter V-6 puts out 261 horsepower, while the standard 2.5-liter four-cylinder develops 152 hp. Five- or six-speed manual transmissions are available, as is a five-speed automatic transmission. Fuel economy ranges from 19/23 mpg with the four-cylinder manual versions to 14/19 mpg with the big V-6, automatic Frontier. Performance spans the range, too, with four-cylinders slogging particularly hard against the truck's increased size and weight. The V-6 Frontier, however, feels strong and passes other vehicles fairly easily at highway speeds. It works especially well with the five-speed automatic transmission, which never hesitates to find the right gear and go if a burst of power is needed.

The 2008 Nissan Frontier comes in either rear- or four-wheel drive and in four-door King Cab and Crew Cab versions. The former configuration includes front-hinged rear access doors and flip-up backseats, while the latter comes with conventional rear-hinged doors and a full-sized bench seat. The King Cab has two small, rear-hinged doors providing access to the smallish space behind the front, where you'll find a small backseat that children can be happy with or that two adults can marginally use in an absolute pinch. The Crew Cab offers a full-size backseat like an SUV, with normal forward-opening doors, easy entry, and enough space for two adults to sit for extended trips. The driving position is upright and good, and the seats feel more comfortable than in any other compact pickup we can remember.

A "high-utility" pickup bed includes both a factory-applied spray-in bed liner and a "Utili-track" cargo tie-down system. The longest bed, though, is six feet long, which limits somewhat its workhorse utility. The 2008 Nissan Frontier can tow up to 6,500 pounds.

A limited-slip differential, leather seats, a high-powered Rockford Fosgate audio system, and a choice of either XM or Sirius Satellite Radio can be ordered. For 2008, Nissan's Frontier also offers Bluetooth.

Standard features on the 2008 Nissan Frontier include four-wheel disc anti-lock brakes and tire pressure monitors. Side and curtain airbags are available as options. Crash ratings are mostly four stars for front impacts and five stars for side impacts.

The 2008 Nissan Frontier offers a style that mid-size truck buyers are looking for.

TheCarConnection.com found that there's nothing spectacular about the 2008 Nissan Frontier's styling, but it still manages to have a lot of appeal.

Although it is often referred to as compact class, the 2008 Nissan Frontier is truly a mid-size pickup, offering a six-foot bed and two extended cab lengths, including a King Cab and a Crew Cab. Crew Cabs offer the standard five-foot bed, but the six-foot bed is available on the SE and LE models of this size 2008 Nissan Frontier. Automobile observes, “Despite this, the Frontier is at the smallish end of the new mid-size range,” while also includes the Dodge Dakota and Toyota Tacoma. The 2008 Frontier is what ConsumerGuide refers to as a "middle-of-the-pack size"; with its design and style, it "carves out a nice niche for itself in the compact-pickup market."

Edmunds is one of the few sources to describe the interior. “The roomy cabins offer straightforward controls, comfortable front seats and an attractive design,” they note.

TheCarConnection.com’s editors have driven the Frontier. Nissan’s style is a good mix of straight struck lines and some carlike curves around the large chrome-bar grille and at the lower edge of the side-rear windows. Grey plastic and orange markings trim the interior, and though the plastics and fabrics look inexpensive, the design is straightforward and logical.

The 2008 Nissan Frontier has unexpectedly reasonable performance with the optional V-6 engine; four-cylinders are best left to work-truck duty.

The 2008 Nissan Frontier offers performance that is to be expected of a rough-and-tumble mid-size truck.

The 2008 Nissan Frontier is available with a 2.5-liter, four-cylinder that creates 152 hp coupled with 171 pound-feet of torque, “making it a decent choice only for those who need a low-cost, light-duty work truck,” Edmunds says.

The optional engine is a 4.0-liter V-6 that builds up 261 hp and 281 pound-feet of torque. ConsumerGuide makes note of the fact that the automatic V-6 "kicks down quickly for good midrange passing punch." Car and Driver says, “the Frontier stands out in its segment, thanks to its excellent 261-hp V-6 engine and its stellar steering and on-road handling.” Automobile says the V-6 Frontier “launches the 4x4 Crew Cab from 0 to 60 mph in just over eight seconds.”

Fuel economy ranges from 19/23 mpg with the four-cylinder manual versions to 14/19 mpg with the big V-6, automatic Frontier. The V-6 engine is also available in a four-wheel-drive option, and as Edmunds says, "Frontier 4x4s are capable off-road, thanks to a maximum 10.1 inches of ground clearance and plenty of suspension travel."

The 2008 Nissan Frontier’s ride is also better than that of most pickup trucks, and ConsumerGuide calls the ride "absorbent," pointing out that passengers notice bumps, but they don't jar like they do in some off-road vehicles. Car and Driver also points out that the 2008 Nissan Frontier’s “structure is extremely solid,” and “the steering is tight and accurate.” Edmunds reports that “ride quality on pavement is surprisingly good for a compact/midsize pickup truck, and the steering is tight and communicative.”

The 2008 Nissan Frontier has comfortable front seats, but utility depends on how many doors or how much bed capacity you need.

Most reviewers think the room in a 2008 Nissan Frontier is fitting for its size, but some want a higher-quality interior.

Reviewers mostly agree on the interior roominess and quality of the Nissan 2008 Frontier. The interior is called "spacious" by Edmunds, and ConsumerGuide says there is "good six-footer headroom and legroom" in the front seat. This is because, with the extended bed options, the interior of the truck has grown, making it more of a mid-size pickup than a compact truck. The Crew Cab has more interior space than the King Cab, but even in the Crew Cab, the backseat is considered too small or uncomfortable for adults to ride in.

Thoughts on the quality of the interior of the truck are mixed. As Car and Driver states, "Interior quality is above average for the segment, as many of the Frontier's interior pieces are shared with the Nissan Xterra sport-utility vehicle," while ConsumerGuide explicitly believes that the interior "all looks low-buck" due to hard plastic on most surfaces.

TheCarConnection.com adds that there is also quite a bit of storage space available, both in the bed and the cabin of the Nissan 2008 Frontier. The availability of options on bed length (with five- or six-foot choices available) allows the buyer to choose the proper bed depending on the space they need. The rear seats in the extended cabs can flip up, providing storage space on the inside, as well as security and protection for important items.

A "high-utility" pickup bed includes both a factory-applied spray-in bed liner and a "Utili-track" cargo tie-down system. The longest bed, though, is six feet long, which limits somewhat its workhorse utility. The 2008 Nissan Frontier can tow up to 6,500 pounds.

The 2008 Nissan Frontier performs well in crash tests, but many safety features are options on the base version.

TheCarConnection.com finds that the Nissan Frontier 2008 model offers many safety specs and features, which helped it earn high ratings in government crash tests.

Standard safety features on the 2008 Nissan Frontier includes anti-lock brakes and front airbags. Stability control and side airbags are available as options, as are curtain airbags.

Car and Driver notes that additional safety features that come standard on all trim levels include "active headrests for the front seats" as well as a tire pressure monitoring system and seatbelt pretensioners.

There are many features available for the 2008 Nissan Frontier, particularly utility features for the bed.

The 2008 Nissan Frontier has many different features to appeal to a wide range of buyers.

Some features in the 2008 Nissan Frontier are completely off the menu, like a regular-cab version, many reviews note. Other features, like the utility bed package, make up for that omission. As Cars.com points out, the utility bed package is "now standard on Nismo-equipped King Cab Frontiers." This feature supplies the truck with a spray-in bed liner, as well as a "Utili-track" tie-down system.

There are also other features available, including a choice of wheel sizes going all the way up to 17 inches.

A limited-slip differential, leather seats, a high-powered Rockford Fosgate audio system, and a choice of either XM or Sirius Satellite Radio can be ordered. For 2008, Nissan's Frontier also offers Bluetooth.

Edmunds observes that "options packages get automatically lumped together," which forces buyers to spend more money on an entire package even if there is just one single option they are interested in.

Be the first one to write a review on 2008 Nissan Frontier
Rate and Review your car for The Car Connection! Tell us your own ratings for a vehicle you own. Rate your car on Performance, Safety, Features and more.
Write a Review
USED PRICE RANGE
$7,990 - $16,200
Browse Used Listings
in your area

7.8
Overall
Expert Rating
Rating breakdown on a scale of 1 to 10?
Compare the 2008 Nissan Frontier against the competition
Compare All Cars
Looking for a different year of the Nissan Frontier?
Read reviews & get prices
Related Used Listings
Browse used listings in your area