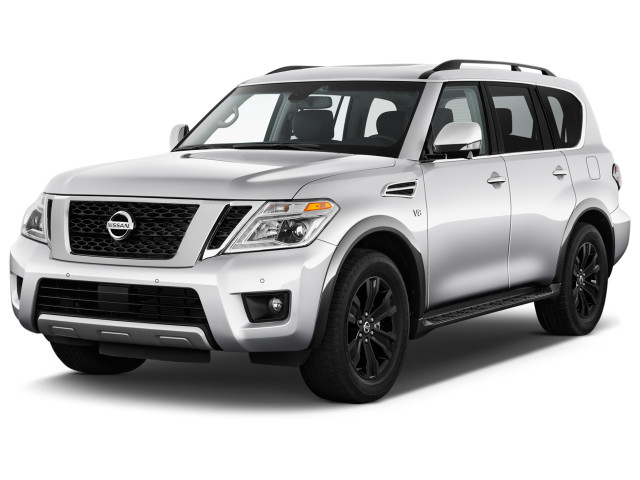 We like the Armada Platinum trim’s luxury equipment for less money, especially with its f active safety equipment.

The 2019 Nissan Armada is a wide family team bus with plenty of capability and a relatively low price tag.

Hauling an army of children apparently takes a war wagon. The 2019 Nissan Armada sounds up to the task.

The big 7- or 8-seat family hauler returns this year with standard automatic emergency braking. Complete with a big V-8 and enough seats and stretch out space for a basketball team, the Armada earns a 5.6 on our overall scale. (Read more about how we rate cars.)

Offered in SV, SL, Platinum, and Platinum Reserve trim levels, the Nissan Armada is more luxurious than its mainstream badge would indicate. It’s related to the Infiniti QX80 and is sold as the Nissan Patrol in other parts of the world.

Only offered with a 5.6-liter V-8 that makes 390 horsepower, the Armada is capable and competent albeit very thirsty. A 7-speed automatic is mated to the big V-8 and sends power to the rear wheels, or all four wheels when equipped.

Like other body-on-frame SUVs, the Armada is rated to tow sizable toys. When equipped, the Armada can drag up to 8,500 pounds behind its rear bumper, enough for a boat or camper or trailer full of toys.

The Armada’s best features are found inside, with plenty of room in the front two rows for adults and a third row that’s best suited for children. Cargo space is reasonable when all three rows of seats are in place, but the Armada maxes out with more than 95 cubic feet of room with the first two seats out of the way—a sea of empty space, perhaps.

This year Nissan makes automatic emergency braking standard on the Armada; it also gets an 8.0-inch infotainment touchscreen.

Most of the Armada’s equipment feels just a few years behind the times, though. And we’d like it better if Nissan handed over infotainment duties to smartphones via Apple CarPlay or Android Auto, but that’s not in the cards this year.

The 2019 Nissan Armada doesn’t hide its bulky exterior well, but the big body is a boon to interior room.

Normally, we wouldn’t knock curvy, but the 2019 Nissan Armada wears just a few too many bends for our tastes.

The big SUV drapes hundreds of pounds of sheet metal over its big frame, but it’s too distracting. The interior is better, so it’s a wash. The 2019 Armada gets a 5 out of 10 for style. (Read more about how we rate cars.)

We’re more convinced inside, where the Armada is reasonably upscale—even if it’s in the least expensive SV grade without leather and chrome. Platinum Reserve trims might sound like top-shelf bourbon but paying more doesn’t necessarily make us feel better in the morning either—tony trims are just busier inside.

The Armada uses a dizzying number of buttons and controls, but they’re all easily mapped and handy after just a few hours.

The curvy dashboard doesn’t rob any room from passengers, and we like the tall riding position for all passengers that offers a good view outside.

The 2019 Nissan Armada smooth and powerful, it’s best when loaded full of gear and people.

Body-on-frame SUVs like the 2019 Nissan Armada are better when towing or hauling large families, not carving canyons or navigating tight parking lots.

The big 5.6-liter V-8 is strong, and its double-wishbone front and rear suspension is smooth and compliant. We give the Armada a point above average for both but deduct one for handling that’s better left for team buses. The Armada lands at a 5 out of 10 for performance. (Read more about how we rate cars.)

All Armadas get a 5.6-liter V-8 shared with Titan full-size pickup trucks and the Infiniti QX80. The engine is rated at 390 horsepower and 394 pound-feet of torque and can tow up to 8,500 pounds, when equipped. We’ve pegged the Armada’s 0-60 mph acceleration at around seven seconds, hilariously fast for a 6,000-pound SUV full of people and cargo. It’s best when not taxed for drag-strip duty and calmly—and competently—shuttling the Armada up mountain passes to the next ski stop.

A smooth shifting 7-speed automatic shuttles power to the rear or all four wheels, when optionally equipped.

The Armada’s four-wheel independent suspension helps, too. Unlike the related QX80, which uses an air suspension, the Armada uses a coil-spring setup, but the ride quality doesn’t suffer. The ride is predictably best with taller sidewalls found on the SV’s 18-inch wheels, but the 20-inchers that are more commonly found on most Armadas aren’t unduly harsh.

Tall-riding SUVs like the 2019 Armada lean heavily into corners, but the big Nissan controls its body motions well. We’ve had no problems taking the big SUV around town and through mountain passes, although its wide track doesn’t necessarily acquit itself well to narrow trails and cramped paths.

We have noticed that there’s very little steering feel and the wheel is too light for such a big SUV.

The 2019 Nissan Armada excels at hauling people and cargo with a surprising level of luxury.

Few vehicles are equipped as well as the 2019 Nissan Armada at hauling large families—it’s part of the name, after all.

The first and second rows are spacious, if not palatial. The cargo room is just as impressive. All three are worth points above average, which is how we arrive at an 8 out of 10 for comfort. (Read more about how we rate cars.)

The Armada SV is the only trim level equipped with cloth seats, but every trim gets good-looking interior appointments with soft-touch materials, fake wood trim, and chrome accents. Platinum and Platinum Reserve trim levels get leather accents splayed across the doors.

The front seats are accommodating and comfortable, and while they’re not the same seats from Nissan’s famed repertoire of ergonomically efficient thrones, the Armada’s front seats are all-day pleasant. The view from the front seats is predictably good, a boon for tall-riding SUVs that offer a commanding view of the road.

The rear seats are available as a three-person, split bench in every trim, or as two captain’s chairs in SL, Platinum, and Platinum Reserve versions. We haven’t had a chance to sample the bench seats, but the leg room is generally good with 41 inches of stretch out space in all versions. The second-row seats recline and slide in every model, and are heated in Platinum grades.

The third-row seats are serviceable, albeit hard to access for adults. With scant 28.4 inches of leg room, the last row is best reserved for children.
With all three rows in place, the Armada offers 16.5 cubic feet of cargo room, mostly vertical space. With the third row tumbled down, the space opens up to nearly 50 cubic feet and with only the first row in place, the Armada opens up to more than 95 cubes.

In all versions of the Armada, we’ve found the fit and finish to be on par with most premium or luxury vehicles, if not a little behind the times compared to its rivals for tech.

What scores are available aren’t great, but the 2019 Armada is equipped with standard automatic emergency braking.

Federal officials don’t have good things to say and independent crash-test agencies haven’t built a wall big enough to run a 2019 Nissan Armada into yet. Until more scores are available, we’re withholding our safety score. (Read more about how we rate cars.)

According to the NHTSA, the Armada earned a four-star overall score, including rare three-star scores for front crash safety and rollover safety. Put simply, that’s not up to par.

This year, the news for the 2019 Armada is standard automatic emergency braking on every trim level. Adaptive cruise control and a rear-seat reminder are standard, too.

Aside from active safety features, the Armada is equipped with six airbags, traction control, and a rearview camera. Platinum and Platinum Reserve trims are equipped with a camera-based rearview mirror.

Used Nissan Armada for sale near

The 2019 Nissan Armada comes equipped with a flotilla of good features, but it gets modestly luxurious toward the top trims.

New for this year, every Armada gets standard automatic emergency braking, adaptive cruise control and a suite of active safety features. Pair those with standard premium audio from Bose, 18-inch wheels, seating for up to eight, and an 8.0-inch touchscreen with navigation, and the Armada gets a 7 out of 10 on our features scale. (Read more about how we rate cars.)

With the Armada, Nissan offers the big SUV in four trim levels with scant options in between. The Armada comes in SV, SL, Platinum, and Platinum Reserve trims that are separated by roughly $20,000.

That’s compelling, especially considering that rivals from luxury brands such as Cadillac and Mercedes-Benz can cost tens of thousands more.
We see the Armada’s best value toward the top, but not at the top. The 2019 Nissan Armada Platinum offers luxury features starting for around $64,000 that include leather upholstery, rear seat entertainment, an 8.0-inch touchscreen, a surround-view camera system, blind-spot monitors, active lane control, and 20-inch wheels. For a family vehicle, the 2019 Armada Platinum is very expensive—among luxury SUVs, it’s a relative value.

The SL trim level is roughly $8,000 less, but it lacks key features such as active lane control, a surround-view camera system, and a camera-based rearview mirror that can help drivers maneuver the bulky vehicle.

Nissan’s infotainment system isn’t as user-friendly as others on the market, and in the Armada, it lacks Apple CarPlay or Android Auto compatibility. For a new car with a lackluster user interface, we wish Nissan would hand the keys over to one of those popular smartphone systems already.

You weren’t expecting good fuel economy from the 6,000-pound 2019 Nissan Armada, were you?

The big, bulbous SUV will manage only around 15 mpg combined according to the EPA. That nets a 3 out of 10 on our fuel economy scale. (Read more about how we rate cars.)

Be the first one to write a review on 2019 Nissan Armada
Rate and Review your car for The Car Connection! Tell us your own ratings for a vehicle you own. Rate your car on Performance, Safety, Features and more.
Write a Review
USED PRICE RANGE
$28,777 - $56,499
Browse Used Listings
in your area

5.6
Overall
Expert Rating
Rating breakdown on a scale of 1 to 10?
Compare the 2019 Nissan Armada against the competition
Compare All Cars
Looking for a different year of the Nissan Armada?
Read reviews & get prices
Related Used Listings
Browse used listings in your area