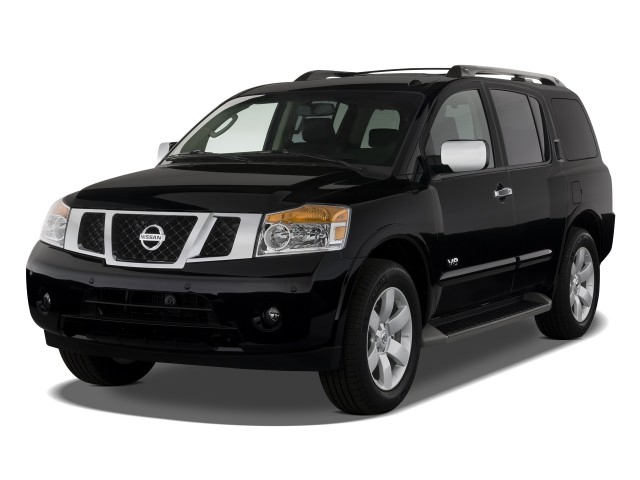 The market for huge, gas-guzzling SUVs has never fully recovered since last year’s four-dollar-per-gallon gas, so finding a deal on a 2009 Nissan Armada should come easy.

Competitors to the 2009 Nissan Armada offer roomier interiors and better options, but the Armada should be commended for its handsome looks and powerful V-8 engine.

With its imposing stance and rugged styling that’s a bit bolder than that of other full-size SUVs, the 2009 Nissan Armada stands out in looks but not necessarily performance or practicality. Revamped for the 2008 model year, the Nissan Armada returns for 2009 with its standard 5.6-liter V-8 engine producing 317 horsepower and 385 pound-feet of torque, as well as a sprinkling of revised equipment and package offerings.

The 2009 Nissan Armada’s five-speed automatic transmission offers class-leading towing capacity of up to 9,100 pounds and doesn’t hesitate to downshift. The Armada is, quite simply, a guzzler; the EPA city rating is just 12 mpg, and lower real-world figures are likely if you’re doing a lot of stop-and-go. The ride of the 2009 Nissan Armada is firm but smooth, soaking up most major bumps, but all of its heft is felt in corners and when braking.

The front seats are perched relatively high, which gives good forward visibility, though the thick rear side pillars impair backward visibility. The front seats are quite comfortable, though, and it's easy to find a good driving position with the available adjustable pedals. The 2009 Nissan Armada has a seating capacity of up to eight passengers with standard second- and third-row bench seats; second-row captain's chairs are also offered for a seven-passenger capacity. When the third-row seats are up, there's very little cargo space left. The instrument panel is eye-catching, but the materials and plastics inside still lag those used in top rivals.

The 2009 Armada hasn't been crash-tested by the insurance-industry-affiliated IIHS, but in the federal government's tests, it receives four- and five-star results in frontal impact protection, with three-star results in rollover because of the Armada’s high center of mass. Side curtain airbags and stability control are standard, along with anti-lock brakes. The LE model adds front side airbags, which are also available in the 2009 Nissan Armada SE model's Premium Package option.

The 2009 Nissan Armada is a more exciting-looking alternative to domestic SUVs.

The 2009 Nissan Armada is an attractive vehicle both inside and out.

While Kelley Blue Book reviewers concede that the Nissan Armada's "unconventional styling may not be to everyone's liking," most others, such as Motor Trend testers, find that the Armada sports a "handsome body." Motor Trend adds that the Nissan Armada looks "chunky, modern, and sporty, and the big wheels and tires look great." Edmunds says, “Its front fascia is nothing short of menacing, and its bumpers and fenders have the sort of bulging mass usually associated with power lifters and gridiron gods.” Forbes Autos notes, "while not a fleet unto itself, the full-size Nissan Armada is certainly as large as some boats." Kelley Blue Book points out that the Nissan 2009 Armada features a "raised roof, arched door frames and huge side fender flares," which make it "one of the most ornate SUVs" that they've encountered.

ConsumerGuide praises the interior gauges for being "easy to read," though they comment that the "simple three-dial climate system may be a stretch away for some drivers." Edmunds reviewers enjoy looking at the "newly sculpted dash" that integrates a "7-inch color display," and mention the "more luxurious ambiance" of the cabin, while noting, “The cabin's aesthetic is just as testosterone-spiked as the rest of the ride. Buttons and displays are king-sized all around.” Reviewers who previously criticized the interior look of the Armada have been won over by the 2009 edition. Cars.com is particularly impressed, commenting that the Nissan Armada is "easily as elegant" as the "$63,000-plus Toyota Land Cruiser," even though the Nissan Armada's base price range is about $20,000 lower.

The 2009 Nissan Armada accelerates quickly to, and away from, gas stations, while also possessing the towing capacity of a tugboat.

Reviews read by TheCarConnection.com’s editors portray the 2009 Nissan Armada as an SUV with a powerful engine that drinks gasoline and doesn’t possess great handling.

Motor Trend observes that the Nissan Armada offers "great grip and no drama when cornering," though Edmunds reviewers feel that "the massive girth of this truck is obvious when cornering." ConsumerGuide calls the Armada's handling "clumsy in close quarters," and says the steering "has a firm feel, but Armada reacts slowly to inputs." When it comes to ride quality, Kelley Blue Book finds that "so long as the road remains fairly smooth the Armada maintains a very livable ride." On coarser surfaces, ConsumerGuide warns "jiggle is noticeable over patchy pavement and expansion joints." The 2009 Nissan Armada also boasts confidence-inspiring brakes, which Motor Trend praises as "superior to the other SUVs" in its class.

The 2009 Nissan Armada turns in terrible mileage figures, even for a full-size SUV. Car and Driver lists frequent "trips to the fuel pump" as one of the Nissan Armada's low points, thanks to an EPA-estimated 12 mpg city and 18 mpg highway on two-wheel-drive models, which drops ever so slightly to 12/17 mpg on the four-wheel-drive versions. The Armada ranks as one of the lowest-mileage full-size SUVs that TheCarConnection.com’s editors have tested; this editor could only average 11 mpg in mostly city driving in one.

Reviews read by TheCarConnection.com rave about what Forbes Autos describes as the "generous low-end torque" of the Nissan V-8—the only engine available, as Edmunds points out, is “a 5.6-liter V8 that pumps out 317 hp and 385 pound-feet of torque."  ConsumerGuide testers also find that the "Armada delivers fairly strong takeoffs," and Motor Trend testers manage to go from "0 to 60 in a mere 6.8 seconds." In addition to incredible acceleration, the Nissan Armada's V-8 boasts a towing capacity that The Auto Channel says "beats out competition by more than 2,000 lbs."

The ‘09 Nissan Armada also offers a single transmission option—albeit a highly rated one. ConsumerGuide praises the "alert, smooth-shifting automatic transmission" that features five forward gears. Forbes Autos adds that one of the appealing features of the "Armada's automatic transmission" is that it "includes a mode that adjusts shift patterns during towing or hauling" for an optimum mix of power and fuel economy. Cars.com reviewers also point out that the Nissan 2009 Armada "is available with either two-wheel (rear) or four-wheel drive" on any trim.

The 2009 Nissan Armada provides ample and comfortable seating room but doesn’t present the same high-quality feel inside as many of its rivals.

While the comfort and quality of the Nissan Armada has steadily increased every year, the 2009 model still lags behind its competitors.

The Nissan Armada has been criticized over the years for the use of some low-quality materials, but the 2009 Armada offers "more soft-touch materials and wood-tone accents," according to Edmunds, but while "it's much more inviting than before, the Armada's interior still lags behind the solidly executed examples set by General Motors." ConsumerGuide affirms that, observing "interior decor is mostly plain with materials that trail Armada's large-SUV rivals." ConsumerGuide also finds some build-quality issues, as their "test examples had various creaks and rattles, including a squeaking steering column." Despite these concerns, the Nissan 2009 Armada offers a decently quiet highway ride. ConsumerGuide reports "wind and road noise are nicely muffled," aside from some "wind whistle from the cargo area."

The large dimensions of the 2009 Nissan Armada shine through when it comes to interior comfort, and reviews read by TheCarConnection.com unanimously praise the "roomy cabin," as Edmunds refers to the Armada's interior. Up front, ConsumerGuide reviewers find "roomy, supportive seats" and "standard power pedals," as well as "standard tilt steering wheel" that allow drivers to "fine-tune a comfortable driving position." The second row also "outclasses the others" in terms of "headroom and legroom," according to Motor Trend. However, The Auto Channel warns "third-row passengers are going to feel smashed." In its standard configuration, the 2009 Nissan Armada has "seating for up to eight," says ForbesAutos, though Kelley Blue Book notes that "an excellent set of optional second-row captain's chairs" reduces capacity to seven.

Cargo space, like seating capacity, is ample within the 2009 Nissan Armada. ConsumerGuide praises the "terrific interior storage" on the Nissan Armada, as "bins, pockets," and "beverage holders abound." As for rear cargo storage, Edmunds says the "second and third rows are split and easy to fold flat, allowing one to optimize most any combination of people and cargo," but even with "both rows folded down, maximum cargo capacity stands at 97 cubic feet, which rates about 10 cubes less than the Armada's domestic rivals." One convenient feature of the folding rear seats is that "unlike some competing vehicles, the headrests do not have to be removed first," according to Cars.com.

Airbags and safety features surround occupants of the 2009 Nissan Armada, though its crash-test results aren’t class-leading.

Both the SE and LE trim levels of the 2009 Nissan Armada come loaded with a wide variety of standard and optional features. On the higher-end LE trim level, ConsumerGuide notes that Nissan includes "front side airbags" and a "front-obstacle-detection system." ForbesAutos offers on-road impressions of these systems, saying, "brake-force distribution and brake assist are able to stop the charging Armada quickly and efficiently." Edmunds reviewers report that "Antilock disc brakes (with brake assist), stability control, front-seat active head restraints, rear parking sensors and side curtain airbags," along with a rear-obstacle-detection system, all come standard on every 2009 Nissan Armada.

After conducting both front impact and rollover tests, the National Highway Traffic Safety Administration (NHTSA) awards the Nissan 2009 Armada a full five out of five stars for front impact driver protection, and four out of a possible five stars for front impact passenger protection. The one crash-test figure that stands out in a negative light is the rollover rating; The Auto Channel notes that the 2009 Nissan Armada "earned a rollover rating of three of five stars," which is not altogether unexpected on such a large vehicle. The Insurance Industry for Highway Safety (IIHS) has not yet crash-tested the 2009 Nissan Armada.

Reviews read by TheCarConnection.com’s editors generally praise the 2009 Nissan Armada for its driver visibility, which typically isn't a virtue on large SUVs. ConsumerGuide says, "visibility is commanding," thanks to the Nissan Armada's "jumbo door mirrors and unobtrusive headrests." Kelley Blue Book adds that "the broad expanse of glass allows for good 360-degree visibility," and The Auto Channel points out that the "Rear Proximity Sensor System" will "beep when you are close to an obstacle," further aiding parking lot driving.

Used Nissan Armada for sale near

Everyone riding in the 2009 Nissan Armada stays comfortable and entertained with a wide variety of standard equipment and optional frivolities.

Regarding both standard and optional features, the 2009 Nissan Armada has a very full toy box.

There’s a wide variety of options packages available for tech-loving Armada owners. ConsumerGuide says that for Nissan, 2009 brings some other noteworthy options to the Armada, including a "power sunroof" and "Preferred Package" that includes "heated front seats," along with "power rear-quarter windows, [and] wireless cell phone link." Kelley Blue Book proclaims, "if your kids are all about high-tech gadgetry and love on-board toys, the Armada has you covered," thanks in part to its optional "rear-seat DVD entertainment."

Cars.com reviewers note that some of the improvements to the optional features for the 2009 Nissan Armada include "an improved navigation system with XM NavTraffic real-time traffic information" and a "larger LCD screen (8 inches)" for the optional DVD entertainment system.

Be the first one to write a review on 2009 Nissan Armada
Rate and Review your car for The Car Connection! Tell us your own ratings for a vehicle you own. Rate your car on Performance, Safety, Features and more.
Write a Review
USED PRICE RANGE
$10,900 - $12,320
Browse Used Listings
in your area
7.8
Overall
Expert Rating
Rating breakdown on a scale of 1 to 10?
Compare the 2009 Nissan Armada against the competition
Compare All Cars
Looking for a different year of the Nissan Armada?
Read reviews & get prices
Related Used Listings
Browse used listings in your area