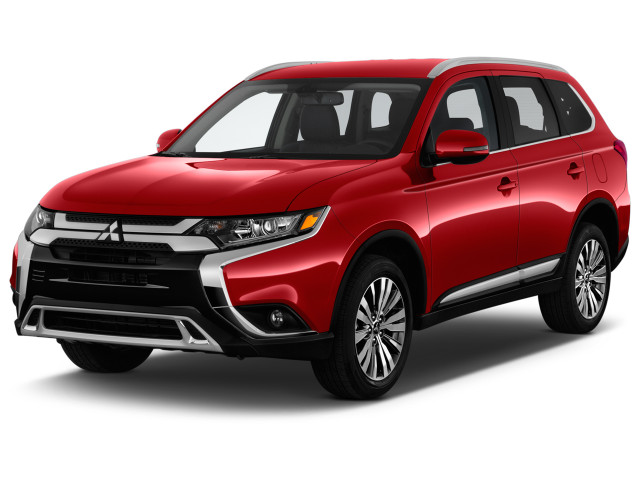 The Outlander is at its best at the bottom of the range, where you can get desirable features for a much lower price.

The 2019 Mitsubishi Outlander is a solid option outside of the usual crossover SUV choices but is often forgotten for a reason.

The 2019 Mitsubishi Outlander is a decent alternative to the many crossover SUVs it competes with, but there’s a reason Mitsubishi’s sales have slumped for years.

With a total score of 5.8 out of 10 on our scale, the 2019 Outlander performs well, but competitors offer a myriad of more satisfying options, making the Mitsu a more difficult sell. (Read more about how we rate cars.)

Last year, Mitsubishi finally brought over the plug-in hybrid version of the Outlander from overseas, which can run on electricity only for up to 22 miles and is one of the few plug-in crossover SUVs on the market.

For 2019, the Outlander receives some a revised front end, newly standard 18-inch wheels on all trims, new front seats, an electric parking brake, a rear USB port, and tweaks to its suspension and steering for better ride and handling.

Available in ES, SE, SEL, and GT trims, the Outlander is one of the few crossovers of its size that has a standard third row seat standard. It also includes a 7.0-inch touchscreen infotainment system and rearview camera for just over $25,000 after destination charge.

Though delivering on features and value, the Outlander lacks the refined quality of most of its rivals, dropping it from the consideration set of many crossover buyers.

Each Outlander below the top-tier GT trim comes standard with an over-worked 2.4-liter inline-4 that makes 166 horsepower, while the GT packs a V-6 with 224 horsepower, but its power benefit is offset by a drop in fuel economy and a need for premium fuel. Every version of the Outlander is equipped with a continuously variable automatic transmission (CVT) as the only option. Front-wheel drive is standard on ES, SE, and SEL, while all-wheel drive is optional across the range and standard on GT.

The Outlander does deliver on safety, at least in terms of crash test results. Recommended active features such as automatic emergency braking mean buyers have to opt for a package on higher trim levels, tech other competitors make standard.

The 2019 Mitsubishi Outlander tweaked styling this year is not enough to make it prettier.

The 2019 Mitsubishi Outlander received yet another visual update this year, but even with a heavy helping of chrome and bigger standard wheels, this design is still more busy than pretty.

Chrome prominently adorns the front fascia of the Outlander as part of the 2019 updates. It’s still a bit busy, with lots of design elements moving in contrasting directions, but we can’t accuse the Outlander of being a bad-looking SUV overall. Profile is the Outlander’s best angle, with a pleasing-if-anonymous crossover SUV shape. Standard 18-inch wheels are a welcome addition for the new model year, giving this also-ran a more upscale style. The rear fascia is similarly chrome-laden, and though it’s also handsome, many probably wouldn’t be able to pick the Outlander out of a lineup from behind.

The cabin is finished in materials that look good, but reveal that beauty is more than skin deep. Soft touch materials and plastics lag behind competitors in quality, and some surfaces are genuinely outdated.

The 2019 Mitsubishi Outlander is plagued by its aging gas powertrain options, though the plug-in hybrid presents a fresh alternative.

The 2019 Mitsubishi Outlander soldiers on for another year with two outdated engines, neither of which is preferable to the intriguing plug-in hybrid powertrain. However, a surprisingly good steering rack helps the overall score, so we’ve given it 5 out of 10 accordingly. (Read more about how we rate cars.)

In all but the top-tier GT, the Outlander is powered by a 2.4-liter inline-4 that makes 166 horsepower and 162 pound-feet of torque, figures inadequate to move a 3,500-pound-plus crossover with any urgency. The only transmission available is a droning CVT that squeezes some efficiency out of the base powertrain but creates a lot of noise under hard acceleration.

The GT trim gets a 3.0-liter V-6 as standard with power figures of 224 hp and 215 lb-ft, as well as standard all-wheel drive. Despite the bump in grunt, the V-6 still feels tired under heavy acceleration and comes with a decent fuel economy penalty and an unusual requirement for premium fel. The Outlander ES, SE, SEL trims come with front-wheel drive as standard, but all-wheel drive is available in all three trims as well.

Thankfully, the anemic powertrain is somewhat offset by sharp and precise handling, as well as compliant suspension that inspires confidence in the corners as well.

While a plug-in hybrid model was first available last year, any changes have not been announced for  2019. With up to 22 miles of all-electric range and a significant fuel economy boost, we hope it makes a return this year.

We’ll update this space when we know more about the 2019 Outlander.

The 2019 Mitsubishi Outlander is as comfortable and practical as any crossover SUV but lacks the fit and finish of rivals.

With new front seats and a few other tweaks, the 2019 Mitsubishi Outlander is as comfortable as any of its competitors. Unfortunately, it lags behind newer rivals in fit, finish, and materials quality. For this, we’ve given it 7 out of 10, with points above average for its spacious front and second-row seats and for its good cargo utility and one dialed back for the chintzy materials.. (Read more about how we rate cars.)

If you’re looking for a crossover that seats seven without stepping up in size, the Outlander is one of few options, though the third-row seat is suitable only for children. Thankfully, first- and second-row passengers will find themselves sufficiently comfortable, and the Outlander manages similar cargo space figures as many rivals when the third row is laid flat. Behind the third-row seat there’s only 10.3 cubic feet of space, but that number increases to 34.2 and 63.3 cubes as the third and second rows are laid down, respectively.

The 2019 Outlander also gets new front seats, and while we haven’t had the chance to test them yet, the seats in last year’s model were plenty comfortable with large seat bottoms.

Material quality leaves something to be desired, though, with soft touch materials and hard plastics that don’t feel up to the level of the Outlander’s numerous rivals.

Surprisingly good crash test scores boost the 2019 Mitsubishi Outlander’s safety record, but active technology is still too expensive while others make it standard.

The 2019 Mitsubishi Outlander performs valiantly in federal crash tests, though still charges a premium for active safety technology that other competitors offer as standard. For that, we’ve given it 7 out of 10 for safety. (Read more about how we rate cars.)

Though a rearview camera is standard on all Outlanders, buyers must move up to the SEL trim level and pay extra for active safety technology such as blind spot monitors, and forward-collision warnings with automatic emergency braking, adaptive cruise control, and lane-departure warnings. Those features are included with the Touring package on the Outlander SEL and top-tier GT. For comparison, the Toyota RAV4 and Honda CR-V offer all of these technologies as standard equipment.

The Outlander boasts solid crash test scores, and was an IIHS Top Safety Pick award winner in 2018. The 2019 version gets five stars overall from the federal government, but only on the all-wheel drive model. Front-wheel drive Outlanders only get four stars overall, however.

Used Mitsubishi Outlander for sale near

For 2019, the Mitsubishi Outlander adds a few standard features. We’ve given it an 6 out of 10 for its good overall feature set. (Read more about how we rate cars.)

Available in ES, SE, SEL, and GT trims, two different drivetrains, and with at least two powertrains the Outlander can be had almost any way buyers like. The base ES trim includes seating for seven occupants, a 7.0-inch touchscreen infotainment system with Bluetooth connectivity, dual-zone climate control, keyless ignition, a leather-wrapped steering wheel, front and rear USB ports, 18-inch wheels, and a rearview camera as standard.

The SEL trim includes leather upholstery, higher-quality trim pieces, and the option for the Touring package which includes active safety features. That’s the Outlander we’d recommend, one with the Touring package. At about $31,000 with front-wheel drive, it’s not inexpensive—although it’s often discounted.

Outlander GT models offer the same standard equipment as SEL models, but with the V-6 engine and all-wheel drive as standard, as well as standalone options like a rear seat entertainment system.

The 2019 Mitsubishi Outlander suffers in fuel economy from its outdated powertrains, but a plug-in hybrid model is welcome.

The 2019 Mitsubishi Outlander is a victim of its own aging powertrains, offering middling fuel economy in an increasingly competitive segment. We’ve given it 5 out of 10 for the more popular base engine’s so-so figures. (Read more about how we rate cars.)

The base 2.4-liter inline-4 in most Outlander models suffers from having to haul around over 3,500 pounds of crossover.Its fuel economy figures reflect that it’s an overburdened engine. With front-wheel drive, 4-cylinder Outlanders manage 25 mpg city, 30 highway, and 27 combined.

All-wheel-drive Outlanders see a drop of 1 mpg in each category to 24/29/26 mpg. Stepping up to the V-6 in the Outlander GT model knocks these figures down further to 20/27/22 mpg.

Some competitors earn upward of 32 mpg on the highway even with all-wheel drive.

Fuel economy figures are not yet available for the plug-in hybrid model for 2019.