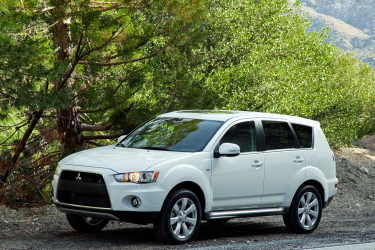 The 2013 Mitsubishi Outlander is an enjoyable, well-equipped vehicle in top-of-the-line GT form; but value-conscious families have plenty of better (and fresher) choices.

To say that the Mitsubishi Outlander--a vehicle that's entering its seventh model year since its last redesign--is one of Mitsubishi's best and brightest products goes far to illustrate what a dire situation Mitsubishi currently has in the U.S. market.

For 2013, with a redesigned 2014 model waiting in the wings, the Outlander hangs in, managing to look surprisingly fresh-faced in terms of features, performance, and presentation. Thanks in part to a mild restyle—and the introduction of a sharp Outlander GT model—in 2010, Mitsubishi has kept this crossover up to date with some soft-touch surfaces and modern info screens inside, in addition to the Outlander's generally faultless proportions and details. The Evo-influenced shark-like snout helps give the design some punch, too.

Size-wise, the Outlander is a compact crossover ute by U.S.-market sensibilities; yet judging by its interior it has a lot in common with mid-sizers—including its third-row seat, which is simply too small for adults but doable for kids.

A 2.4-liter four-cylinder engine and continuously variable automatic transmission (CVT) remain the motivation for base ES and mid-level SE models, but it's not a combination we can imagine going to anything but cost-conscious fleets. It's a pretty miserable combination—both in quickness and in noise and vibration. Outlander GT models come with a 230-horsepower, 3.0-liter V-6 that's pretty much the four's opposite—smooth and refined, although not all that punchy at the low revs either. The six-speed automatic makes it quick and responsive and includes shift paddles. And the combination really isn't that much worse for gas mileage.

Outlander SE models come with either front- or four-wheel drive, with the latter system including a locking center differential. On the other hand, the Outlander GT gets a version of the all-wheel-drive system of the Lancer Evolution and Ralliart models, complete with a user-selectable traction program with choices between Tarmac, Snow, and Lock traction modes. It's a sophisticated, road-oriented system, with an Active Front Differential and electronically controlled center diff, bringing an almost uninterrupted flow of torque around tight corners. In GT form, the Outlander's hydaulic steering systems also remains one of the best among crossovers—and if we needed a three-row utility vehicle on a budget the GT might be one of our top picks from a driving standpoint.

The Outlander has good front buckets and space for adults to get comfortable on the second-row bench seat; but the tiny third row will be tight even for small children. The second row is on tracks and slides to increase legroom or cargo space. A unique 'clamshell' tailgate, with a smaller portion that folds downward, will support more than 400 pounds for loading or sitting. And with both the rear rows of seats folded, the Outlander supplies 73 cubic feet of hauling room.

While the 2013 Outlander includes all the safety features you'd expect to find in this class, its safety ratings aren't much to boast about. The Insurance Institute for Highway Safety has given the Outlander mostly 'good' ratings, although it earns 'acceptable' in roof strength; and in federal NCAP tests the Outlander has earned four stars (out of five) across all categories.

We haven't driven an Outlander in several model years, but this model has changed very little otherwise, so read through the pages of our last full review of the Mitsubishi Outlander for more detail.

Be the first one to write a review on 2013 Mitsubishi Outlander
Rate and Review your car for The Car Connection! Tell us your own ratings for a vehicle you own. Rate your car on Performance, Safety, Features and more.
Write a Review
USED PRICE RANGE
$10,995 - $11,999
Browse Used Listings
in your area
7.4
Overall
Expert Rating
Rating breakdown on a scale of 1 to 10?
Compare the 2013 Mitsubishi Outlander against the competition
Compare All Cars
Looking for a different year of the Mitsubishi Outlander?
Read reviews & get prices
Related Used Listings
Browse used listings in your area
See More Used
The Car Connection Daily Headlines