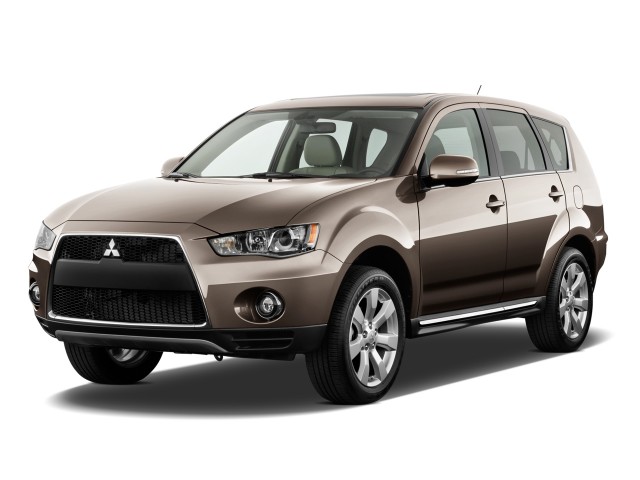 Given the choice, take the V-6 drivetrain. The four-cylinder comes with a CVT that amplifies its worst traits--noise and sluggishness.

It's aged less rapidly than other American-made Mitsus, but the 2012 Outlander still is bypassed by other compact crossovers.

An aging crossover built in Japan, the 2012 Mitsubishi Outlander is a crossover that was one of the company's better efforts when it was launched, and hangs in there now, likely in its final model year. Distantly related to the Dodge Journey, the five- or seven-seat Outlander was last touched up in the 2010 model year with a new interior and fresh front-end styling, and saw a new GT model and new tech features added to its lineup, too.

The updated design plays out well on the Outlander's rakish body. It has a shark-like snout that bears a passing resemblance to the front end on the Mitsu Evo. The Outlander's cabin compares fairly well with other, newer crossovers, too, thanks to new soft-touch materials like leatherette padding on the dash and armrests. A little high-tech feel is layered on top courtesy an LCD screen at the center of the dash.

Mitsubishi still offers Outlander buyers a choice of drivetrains, but there's only one we recommend. A four-cylinder is standard equipment on the Outlander ES and SE; it's bare-bones power, not really adequate to motivate the crossover briskly. It's also saddled with the sluggish responses of a continuously variable automatic transmission (CVT), and that makes it not only dull, but also noisy. Outlander XLS and GT versions come with a much nicer 3.0-liter V-6 with 230 horsepower, shuffled through a responsive, easy-shifting six-speed automatic coupled with shift paddles mounted near the steering wheel. Without too big a gas-mileage penalty, the V-6 brings ample power.

The more basic SE can be fitted with four-wheel drive; the optional system comes complete with a locking center differential. The Outlander GT gets a version of the all-wheel-drive system of the Lancer Evolution and Ralliart models, complete with a user-selectable traction program with choices between Tarmac, Snow, and Lock traction modes. It's a sophisticated system, what with its Active Front Differential and electronically controlled center diff--and that means the Outlander GT has almost seamless distribution of torque between the wheels. The Outlander also has good, communicative steering, and its ride and braking are nicely, firm, as they are in the smaller Lancer.

Adults will fit easily in the front buckets and on the second-row bench seat, but the Outlander's third-row seat is very small--even for young children. The second-row seat slides on rails to boost either leg room or cargo space, depending on the needs of the moment, and the seatback reclines for road-trip comfort. With both the rear rows of seats folded, the Outlander has 73 cubic feet of hauling room--and its unique drop-down tailgate will support more than 400 pounds while it's being loaded.

Neither the NHTSA or IIHS have crash-tested the Outlander under the new scoring systems they introduced in the 2011 model year. All Outlanders come with curtain airbags, active front headrests, stability control, and anti-lock brakes.

For an in-depth look at this crossover, read our most recent full review of the Mitsubishi Outlander.

Be the first one to write a review on 2012 Mitsubishi Outlander
Rate and Review your car for The Car Connection! Tell us your own ratings for a vehicle you own. Rate your car on Performance, Safety, Features and more.
Write a Review
USED PRICE RANGE
$6,288 - $12,997
Browse Used Listings
in your area
7.4
Overall
Expert Rating
Rating breakdown on a scale of 1 to 10?
Compare the 2012 Mitsubishi Outlander against the competition
Compare All Cars
Looking for a different year of the Mitsubishi Outlander?
Read reviews & get prices
Related Used Listings
Browse used listings in your area
See More Used