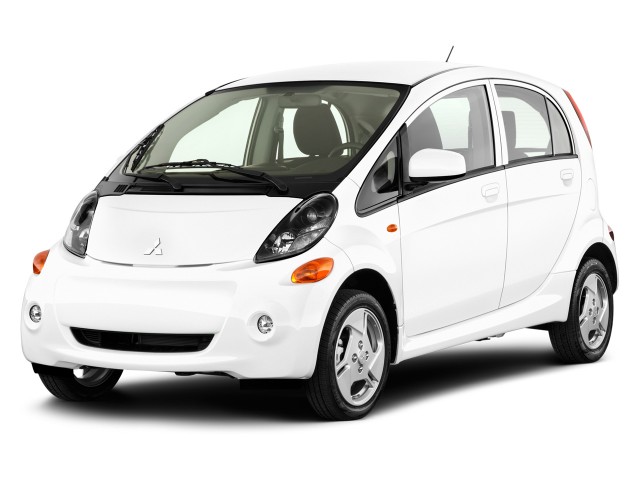 The 2016 Mitsubishi i-MiEV can take as long as 14 hours to recharge on 120-volt household current, so most buyers will likely install a 240-volt Level 2 charging station. Be sure to plan on having this work done before you buy the car, and consult with an electrician to find out if you need additional wiring work or circuit breakers.

The 2016 Mitsubishi i-MiEV is nimble around town, can carry four adults, and has the lowest price tag of any electric car sold in the U.S.--but both its range and performance are only marginal at highway speeds.

While the little 2016 Mitsubishi i-MiEV is the least expensive plug-in car on the market, it also has the lowest range—62 miles—of any battery-electric, and is the smallest four-seat electric vehicle available. It's pricing even undercuts the $25,570 Smart ForTwo Electric Drive, which has only two seats (the soft-top Smart Cabrio is pricier yet). The much higher-volume 2015 Nissan Leaf, which has 84 miles of rated range, far more power, and more interior volume for people and their goods, starts at $28,960.

While it's been on the market since 2012, the 2016 i-MiEV is essentially the same car last offered as a 2014 model—and the one introduced as a 2012. (There were no 2013 or 2015 i-MiEVs offered in the U.S.) It has a few new features and a price cut of more than $6,000 for the 2014 model year; for 2016, its base price is $22,995. The sole change of note this year is the addition of an optional navigation system, with a 7.0-inch touchscreen display and real-time traffic data. The navigation package also includes a rearview camera, a USB port, and Bluetooth hands-free phone pairing.

The 2016 i-MiEV has a wide-eyed and friendly face on what's essentially an egg-shaped five-door hatchback. It's cute, but it's definitely small; park it next to its sibling the Mirage, itself halfway between mini and subcompact, and the tall, narrow i-MiEV is visually the smaller of the two.

Despite its size, the interior room of the i-MiEV may surprise you: It has far more length and headroom inside than you might think. Four six-foot adults can sit comfortably upright in the i-MiEV, although their inboard shoulders may touch. The inside is plain but functional, although the plastics are now somewhat dated looking and the overall trim is relatively sparse. Cargo space is minimal, however, unless you fold down the 50/50 split rear seat (which also reclines, unusually).

Adapted from a special class of minicars sold only in Japan, the electric i-MiEV replaced that car's engine and transmission—located under and behind the rear seat—with a 49-kw (66-horsepower) electric motor driving the rear wheels. It draws its power from a 16-kwh lithium-ion battery pack mounted in the floor and under the rear seat.

While the i-MiEV's official EPA range rating is 62 miles, but high-speed travel or use of either the air conditioning or the heater will cut that number substantially—down to as little as 40 miles in the winter. On the other hand, in temperate weather and with gentle driving and making maximum use of the regenerative braking to recapture every possible watt-hour of energy, you can stretch the range somewhat beyond 62 miles.

The i-MiEV is one of the most energy-efficient cars sold in the U.S., with an EPA efficiency rating of 112 mpge combined. That's only about 10 percent lower than the very high-tech BMW i3 electric car, the most energy-efficient vehicle of any type sold in the U.S. (MPGe is a measure of how many miles an electric car can cover on battery energy that equals the amount of energy contained in 1 gallon of gasoline.)

But the i-MiEV is quintessentially a city car, happiest at or below 40 mph. Around town, it's torquey and just as quick off the line as most gasoline cars. Its tiny turning circle makes it supremely easy to maneuver through crowded city streets, and it's almost as easy to park as the tiny Smart Electric Drive, If you have access to a charging station, it's an ideal urban combat vehicle.

At highway speeds, on the other hand, both its small size and its minimal 49 kw of power mean that it has very little reserve power, and it will chew through range at a worrisome pace. Top speed may be listed at 81 mph, but drivers will find it a struggle to get there and stay there. The car rides smoothly, helped its wheels-at-the-corners long wheelbase, and the suspension is tuned for comfort.

The usual charging port is provided to accommodate both 120-volt charging with a portable charging cable, or 240-volt Level 2 recharging with a dedicated charging station. The onboard charger is only 3.3 kilowatts, but that's enough for the small battery pack—which has only two-thirds the energy capacity of the Leaf. Mitsubishi quotes a 14-hour charge time on a 12-amp 120-volt circuit, and 7 hours using a 15-amp Level 2 charging station.

To its credit, however, Mitsubishi has also made the CHAdeMO DC quick-charging port standard on every i-MiEV as well—meaning that the little car can use the same quick-charging sites as the Leaf, and recharge up to 80 percent of its capacity in less than half an hour.

Safety is not a particularly strong point for the i-MiEV. The IIHS has never rated the i-MiEV, but the NHTSA gives the latest i-MiEV four stars out of five for overall safety. It gets four stars as well for frontal crash and rollover safety, but only three stars for side impact safety. The agency also notes some concerns with the car's performance in NCAP safety tests that are not reflected in those ratings.

Since the little i-MiEV went on sale more than three years ago, sales have totaled less than 2,000 units—against more than 70,000 for the Leaf. Like all battery-electric cars this year, the electric Mitsubishi remains eligible for a $7,500 federal income-tax credit, along with a variety of local and state incentives. In California, those include single-occupant access to the carpool lane and a $2,500 purchase rebate.

The little i-MiEV minicar has an honorable history: It beat the Leaf into mass production as the first modern electric car, though it was then only sold in Japan. But times have passed it by, and today, while its small size and simplicity have their charm, there are more versatile and practical electric cars available for just a few thousand dollars more—and in our judgment, they're absolutely worth the extra money.

2 Reviews
5 star
100%
4 star
3 star
2 star
1 star
Rate and Review your car for The Car Connection! Tell us your own ratings for a vehicle you own. Rate your car on Performance, Safety, Features and more.
Write a Review
2016 Mitsubishi i-MiEV 4-Door HB ES

Great little car...does EXACTLY what I bought it to do.

MeVee has plenty of cargo space for what I need. I have bought a lawn mower, patio chairs, and a shed (in a flat box) from Lowe's and gotten them all home, without difficulty, in this "little giant".

I've gotten more compliments on the car (from women) than I did when I had my '65 Mustang. It is basic, it is reliable, it is fun to drive, and I don't worry that gas prices go up 15 cents over night. + More »
people found this helpful.
Was this review helpful to you? Yes
Browse Used Listings
in your area
6.6
Overall
Expert Rating
Rating breakdown on a scale of 1 to 10?
Compare the 2016 Mitsubishi i-MiEV against the competition
Compare All Cars
Looking for a different year of the Mitsubishi i-MiEV?
Read reviews & get prices
Related Used Listings
Browse used listings in your area
See More Used