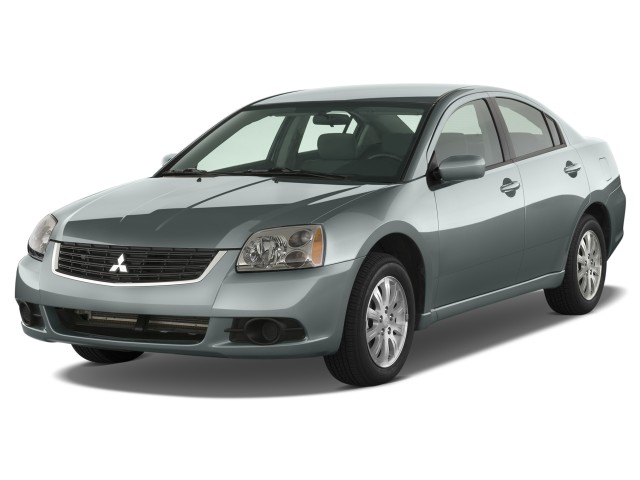 If you don't think the revised look of the 2009.5 Mitsubishi Galant is worthwhile, there might be 2008 or 2009 models still available.

The 2009 Mitsubishi Galant does most things well, but the newest family sedans do them even better.

Despite a number of small refreshes over the years, the 2009 Mitsubishi Galant is essentially identical to the 2004 model, and that's one of its downfalls. It's a fine-looking car, but in the past four years the Nissan Altima, Chevrolet Malibu, and Honda Accord have raised the bar with hot new styles that make the new Galant look like, well, a used car.

Halfway through 2009 Mitsubishi will launch a refreshed Galant. Call it a 2009.5 model with "expressive new styling.” The mid-year introduction includes new lower grille mesh on all ES trim levels, while the Sport and Sport V6 will roll on 18-inch machined aluminum wheels and beefier suspension.

Base model 2009 Galants are powered by a 162-horsepower 2.4-liter four-cylinder engine. The Ralliart model uses a punchy 258-horsepower, 3.8-liter V-6 engine coupled to a five-speed Sportronic automatic with manual shift capability (the automatic is pretty invisible in its shift action). The big V-6 has plenty of smooth power for a sedan of this size, but it's less growly than in other Mitsubishis. Fuel economy ranges from 20 mpg city, 27 highway with the four-cylinder versions to 17/25 mpg with the V-6.

The 2009 Mitsubishi Galant sedans are pleasant to drive. The 2.4-liter four-cylinder engine hustles the LS around, and its suspension absorbs most road impacts well. Tighten up the line into a curve and you notice more imprecision in the rear end, a little squirm, and some movement before it settles into predictable tire squeal. The Ralliart is tighter and more composed. On all versions, the steering is nicely weighted, brake modulation good, and pedal travel short.

The front seats have plenty of room, and so do the deeply set backseats. The interior is covered in industrial-looking trim, and in general, the dark, plastic-addicted cabin needs a richer look and feel.

All 2009 Galants come standard with anti-lock brakes, dual-stage front airbags, front seat-mounted side-impact airbags, side front and rear curtain airbags, and a tire pressure monitoring system (TPMS). The V-6 models feature standard traction control. The federal government rates the Galant with four stars for rollover protection, but other ratings have not been revealed.

For the so-called 2009.5 edition, hands-free Bluetooth has finally been added, though only as part of a major option package. Ralliarts with Navigation also receive rear backup cameras.

The 2009 Mitsubishi Galant has been passed by other family sedans that have sharper, cleaner styling.

The 2009 Mitsubishi Galant hasn't seen a major redesign in more than five years, according to reviews from around the Web and the experts at TheCarConnection.com. It's a fine-looking car, but the Nissan Altima, Chevrolet Malibu, and Honda Accord have raised the bar with hot new styles.

Car and Driver simply refers to its “confused exterior styling.” As Edmunds puts it, the Galant is now a "very dark horse in a stable filled with thoroughbreds." Cars.com says, “Hampering the Galant's attempt to attract buyers is its relatively forgettable looks; the front end is bland and could be at home on any number of sedans.” With the Ralliart edition, Automobile Magazine contends the 18-inch wheels "give the Galant more dignity than a typical mid-size rental, but don't expect the neighborhood kids to follow you home on their bicycles."

The interior of the 2009 Mitsubishi Galant is covered in industrial-looking trim, and in general, the dark, plastic-addicted cabin needs a richer look and feel. Edmunds believes it gets lost in the crowd of its competitors when it comes to interior styling, but it still has attractive qualities worth noting, such as the "cascading center console, blue backlighting, white-faced gauges and metallic or wood-grained accents," which make it "stylish in a contemporary way." Automobile Magazine, however, isn't impressed with its interior styling, and Cars.com goes so far as to call the interior design "unfortunate." Cars.com also dislikes the fact that "buttons are arranged in an anomalous cluster of bizarre shapes."

For everyday driving, the four-cylinder 2009 Mitsubishi Galant will do; if you're looking for a fun, sporty drive, upgrade to the Ralliart's V-6.

Even with the four-cylinder engine, the 2009 Mitsubishi Galant has adequate punch for everyday driving.

The base Mitsubishi Galant DE and ES get their power from an adequate 162-horsepower, 2.4-liter four-cylinder engine. A Galant Ralliart model uses a punchy 258-horsepower, 3.8-liter V-6 engine teamed with a five-speed Sportronic automatic with manual shift capability. The four-cylinder engine has "more-than-adequate power for most situations," according to ConsumerGuide; they clock a 0-60-mph run in 9 seconds. Car and Driver comments, “the four-cylinder is acceptable, but opt for the V-6.” With that V-6 in the Ralliart, the performance image improves considerably. Edmunds says “the V6 engine delivers plenty of power and torque for passing and merging.” And as Cars.com reports, the Ralliart manages "60 mph from a standstill in 6.4 seconds."

A four-speed automatic transmission is paired with both engines. As a disappointed Edmunds points out, "a manual transmission is unavailable on any Galant." Automobile finds the automatic "remarkably responsive,” while “the Galant's 'Sportronic' transmission runs through all four forward speeds with acceptable alacrity, kicking down gamely for hillclimb and passing situations,” Motor Trend asserts.

The handling of the Mitsubishi Galant 2009 is good, particularly in the stiffer suspension of the Ralliart model. Edmunds finds the standard Galant to be “one of the more fun-to-drive family sedans,” and says it “remains flat and predictable and feels smaller than it is.” ConsumerGuide deems the base versions "reasonably nimble," but also points out that they "don't control body motions as well on their softer suspensions." Not everyone is impressed with the handling of the 2009 Mitsubishi Galant Ralliart, though; Car and Driver highlights the "unnerving steering-wheel tugging" that is noticeable "during aggressive acceleration," while Cars.com states that the Ralliart model's "ride can become disruptive over potholes or other major bumps." Cars.com adds, though, that the Ralliart “confidently carves through turns” and has “weighty steering feel” that fits its demeanor.

The 2009 Mitsubishi Galant is spacious and generally quite comfortable, but the limited cargo space and quality of materials are disappointing.

The Mitsubishi Galant 2009 is a roomy and comfortable car, but there are a few repeated complaints about the quality and storage space/accessibility.

As ConsumerGuide points out, the car "easily accommodates six-footers." Not only that, but "three adults fit without undue crowding," which is a seemingly impossible task to accomplish in a mid-size. Edmunds agrees, calling the 2009 Galant "roomy for four." Reviewers also rave about the soft, comfortable seats available in the Mitsubishi Galant 2009 model, and for those who prefer a firmer support, the Ralliart model fits the bill. Cars.com concurs, stating that the front seats offer "plenty of support and not too much side bolstering," and “the Ralliart's leather-covered front bucket seats are quite comfortable and include seat heaters and driver-side power adjustments.” Motor Trend spotlights its “fabulous backseat—oodles of foot room, terrific thigh support, nice armrests, and plenty of head, leg, and shoulder room.”

While there is enough space for drivers and passengers, there isn't much storage for large items. Trunk space is a big drawback in the Mitsubishi 2009 Galant; one of the most frequent complaints is that it has a smaller trunk (13.3 cubic feet) than all of its competitors. ConsumerGuide actually finds more problems with the design, saying that the "short decklid and high liftover limit utility of the roomy, usefully shaped trunk." And as Cars.com points out, "All four competitors offer folding rear seats in at least some trim levels," while the 2009 Galant doesn't. The Galant does offer a ski pass-through, but a lack of folding backseats equals a lack of storage space. ConsumerGuide sums it up: "Cabin storage is nothing special."

Another downfall of the 2009 Galant is in interior materials. As Edmunds states, "The Galant suffers from the typical Mitsubishi trait of subpar interior materials quality," and when put up against its competitors, it just doesn't match their "refined look and feel." Motor Trend reports, “Much of the plastic is cheap-looking.” Cars.com finds the opposite: "Mitsubishi used good-quality materials."

According to Cars.com, road noise isn’t necessarily so bad in the base models of the 2009 Mitsubishi Galant, but they say that in the Galant Ralliart, “road noise ranges from tolerable to intrusive.”

The 2009 Mitsubishi Galant is a safe, secure sedan that lacks a few important features.

The 2009 Mitsubishi Galant achieves mostly good crash-test scores, but its safety equipment isn't quite as extensive as rival models, especially for the entry models.

The National Highway Traffic Safety Administration (NHTSA) gives the Galant five stars for front-impact protection; the Insurance Institute for Highway Safety (IIHS) rates the Galant as “good” for frontal and side impacts. However, the IIHS rates it "poor" in the agency's seat-based rear impact test.

Among the standard safety features are dual front airbags, side airbags, and full-length side curtain airbags. Also on the roster are four-wheel disc brakes, a tire pressure monitor, daytime running lights, anti-lock brakes (for all models except the DE), and even traction control on the Ralliart. The major omission, as Cars.com points out, is that "an electronic stability system is not available."

Visibility is good, according to Cars.com, on the Mitsubishi Galant for 2009, “Thanks to a broad rear window and low trunk, rear sightlines are excellent.”

Used Mitsubishi Galant for sale near

The 2009 Mitsubishi Galant offers a variety of features, but only the awesome Rockford Fosgate sound system is remarkable in its class.

On the 2009 Mitsubishi Galant, the sound system may be the most noteworthy feature. There aren't any standout features, but it comes well-equipped.

There are three trim levels available on the 2009 Mitsubishi Galant: the DE, the ES, and the sporty Ralliart. The DE comes standard with "16-inch steel wheels, cloth upholstery, air-conditioning, a tilt steering wheel, full power accessories, keyless entry and a four-speaker stereo with single-CD player," according to Edmunds. No options are offered on this version.

The Galant ES adds cruise control and six speakers for the audio system; upgrading to the Sport package means more features, including a leather-wrapped steering wheel and rear spoiler. The Ralliart gets sport seats, a V-6 engine, sport suspension tuning, and other features like 18-inch wheels, which Automobile Magazine says gives it "more dignity than a typical mid-size rental."

Among the options, Mitsubishi hits a high note with its audio system. As Edmunds points out, the Premium system, available in the Sport package and on the Ralliart, consists of "an upgraded eight-speaker Rockford Acoustic Design sound system with six-CD/MP3 changer and satellite radio." The package also provides a sunroof, 16-inch alloy wheels, and leather seats. A DVD navigation system is on the options list.

Be the first one to write a review on 2009 Mitsubishi Galant
Rate and Review your car for The Car Connection! Tell us your own ratings for a vehicle you own. Rate your car on Performance, Safety, Features and more.
Write a Review
USED PRICE RANGE
$3,499 - $6,995
Browse Used Listings
in your area
7.2
Overall
Expert Rating
Rating breakdown on a scale of 1 to 10?
Compare the 2009 Mitsubishi Galant against the competition
Compare All Cars
Looking for a different year of the Mitsubishi Galant?
Read reviews & get prices
Related Used Listings
Browse used listings in your area
See More Used