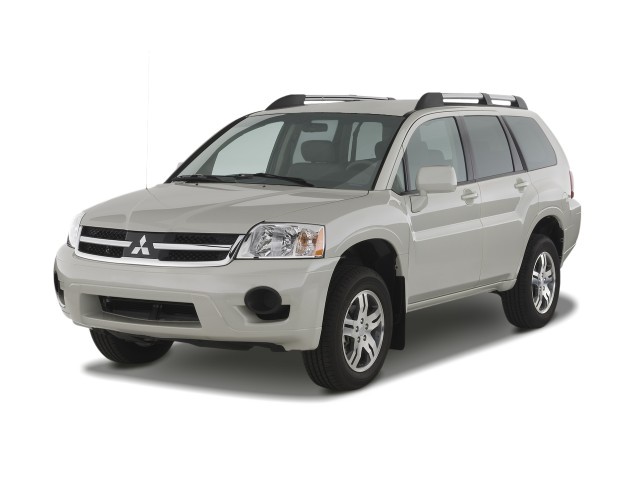 The 2008 Mitsubishi Endeavor isn’t a class leader in sales, and that means it’s easier to make a deal at the showroom. Since you’ll save money versus a more expensive Honda or Toyota, go ahead and tick off the option box for the high-powered audio system; it makes the Endeavor a little more special.

The 2008 Mitsubishi Endeavor is a mid-pack performer in the crowded SUV/crossover class.

Back in 2002, Mitsubishi created a roomy mid-size crossover SUV called the Endeavor. It has received continuous improvements, with the last significant changes happening in 2006. The original SUV's styling became less forced with the most recent makeover, but this vehicle has never been exceptionally popular. Editors from TheCarConnection.com agree that while the 2008 Mitsubishi Endeavor is a good crossover-type SUV, it's not a great one.

The 2008 Mitsubishi Endeavor is available in two trim levels: the LS and the better-equipped SE (with standard leather seats and other premium features). For Mitsubishi, 2008 is the year the company positions the SE to challenge near-luxury brand mid-size SUVs on a feature-by-feature level, but at a lower price point. It sounds like Mitsubishi is learning from the Korean manufacturers in terms of offering great value to get noticed in the market.

One of the Endeavor SE’s most appealing features is the standard 360-watt Rockford Acoustic Design premium audio system featuring steering wheel audio controls, plus Sirius Satellite Radio with a six-month pre-paid service subscription. With this feature, it's easy to rock on down the highway.

On the road, the 2008 Mitsubishi Endeavor is quiet and capable, but not a standout performer. All seating positions offer good comfort, and the cargo area can handle loads up to 4 feet wide. Cargo capacity is 76.4 cubic feet with the rear seats folded, 40.7 cubic feet with the seatbacks are up.

If you're looking for something larger, consider the big Saturn Outlook. While it has shortcomings, its huge interior helps it makes lots of friends.

Honda and Toyota build some of the most popular vehicles in the mid-size SUV segment. The Pilot (new for 2009 and already on sale) and the Highlander (completely redesigned for 2008) are both excellent vehicles that benefit from more advanced engineering.

Another rookie worth considering is Dodge's Journey. The all-new 2009 Journey is taking aim at every target in the mid-size SUV market, and its overtly crossover style may attract a lot of lookers.

A bit overdone on the outside and definitely different within, the 2008 Mitsubishi Endeavor is the antithesis of anonymous.

It’s been toned down a bit, but the 2008 Mitsubishi Endeavor is still controversially bold outside and in.

“From beak to flamboyant wing fenders to angular tail plumage…Endeavor stands out,” said Car and Driver back at the vehicle’s introduction in 2004. Whether the Endeavor stands out in a positive way is most certainly in the eye of the beholder, but given its mediocre sales, perhaps the jury has spoken. One harsh critique comes from MyRide.com, who pronounce the Endeavor “a visually distressing hodgepodge of metal, glass, and plastic.” Yet another originates with the cynics at Jalopnik, who say the Endeavor’s “once-radical styling has already made a quick plunge to dated and come out on the ‘they still make those?’ side of the prestige curve.” But Kelley Blue Book offers a stark contrast to all the criticism: “with its chiseled good looks and tall body, the 2008 Mitsubishi Endeavor stands apart from the mundane 'overgrown station wagon' crowd.”

Though still on the avant-garde side, the interior is generally better received than the exterior. “The visual onslaught continues inside,” claims Car and Driver: “the easily read main instruments sit under a binnacle and glow blue at night but are otherwise ordinary.” Says Automobile of the Endeavor in an eight-SUV comparison, “the unique interior is the most modern in our octet and has a refreshing, airy feel…the Endeavor comes across as a hip refuge for the individualist.” MyRide.com calls it “funky but ergonomically sound,” and Edmunds notes that “the edgy interior design was subdued last year, when the silver center stack that looked like a boom box from 1987 was changed to black -- a polarizing change, to be sure.” But they still feel that the dash offers “more visual excitement than many vehicles in this utilitarian class provide.”

While not quite up to competitive standards, the 2008 Mitsubishi Endeavor’s performance is nonetheless capable and nimble.

The Mitsubishi’s sole engine is a 3.8-liter V-6 with an old-school iron block and aluminum head. Using Mitsubishi’s MIVEC variable valve timing, it churns out an accessible 225 horsepower and 255 pound-feet of torque to yield a smart pull away from the stoplight and strong midrange power, though it runs quickly out of breath in the upper reaches of the tachometer. Kelley Blue Book calls it “a powerful V6 that pulls strongly and achieves acceptable fuel economy,” and Car and Driver notes “the big engine's initial torque moves the Endeavor with grace.” MyRide.com praises its “verve thanks to generous torque and good mid-range punch” but warns that “the Endeavor delivers power somewhat coarsely, and models with front-wheel-drive suffer torque steer.” Car and Driver reveals that “the engine audibly gasps for air as it passes its torque peak.”

The Endeavor’s sole transmission makes do with four ratios, decidedly old school in an age where even GM offers a six-speed auto in many of its products. The ample torque of the V-6 makes it work, but a “heavy throttle foot” is required “to get a downshift from the smooth-acting transmission, making its manual-shift feature useful on congested freeways and in hilly terrain,” says ConsumerGuide. MyRide.com comments that “despite grade logic control, the transmission also has trouble deciding when to shift when climbing hills.”

Handling is a bright spot. The “Endeavor tracks straight and true, with no play felt in the direct and responsive steering,” according to Kelley Blue Book. They also praise its “easy parking and maneuverability.” Automobile lauds Endeavor’s “superb body control and a taut suspension that handles bumps and dips with aplomb,” and Edmunds appreciates its “adept handling in the corners and above-average capability on mildly rutted dirt roads.” Ride quality is good: “Soft but stable,” says ConsumerGuide, “never jarring over bumps, with a pleasing absence of undue float on the highway and minimal side-to-side or fore-aft rocking.” “Ride quality…is agreeable,” comments MyRide.com, which continues, “smoother than most SUVs we’ve driven, the Mitsubishi Endeavor soaked up all manner of pock-marked Los Angeles city streets and rippled California freeways during our one-week test drive.”

ConsumerGuide contends the Endeavor has “good stopping control, but the brake pedal travel is longer than ideal,” while Edmunds gripes that “fuel economy for 2008, however, is unimpressive” at an EPA-rated 15/22 mpg for front-wheel drive and 15/19 mpg for all-wheel drive.

With huge rebates most likely available, the 2008 Mitsubishi Endeavor’s solid comfort and refinement become that much more attractive.

The 2008 Mitsubishi Endeavor generally scores high marks for comfort, quality, and quietude, and it proves a capable cargo hauler to boot.

In the front row, ConsumerGuide finds “generous headroom, but tall folks might wish for more legroom. Cloth seats are generously padded; leather almost coddles.” Car and Driver considers the seats “flat but comfortable.” Edmunds, like others, feels “materials quality could be better, however, as there's more low-grade hard plastic than you'll find in a Nissan Murano or Hyundai Santa Fe.” MyRide.com complains that “too many parts of the interior exhibit a cheap gloss, from the switchgear on the door panels to the upper dash pad.” At least the ergonomics are “a strong point,” according to ConsumerGuide, who reports “the gauges are easy to read…audio and climate controls are large, clearly marked, and easy to reach.” They also like the “smooth, precise switchgear and trendy blue dashboard lighting.”

The Endeavor features only two rows, a definite hurdle in the burgeoning crossover class. In the Mitsubishi's only rear seating area, ConsumerGuide catalogs “ample head, leg, toe space, even with the front seats well aft. Three adults fit with some squeezing.” They also like the large door openings that ease entry and exit. Cars.com attests “backseat space is roomy at the sides and tolerable in the center.” And Car and Driver cautions “having no third row may be a strategic mistake.”

“At 76 cubic feet, the Endeavor's maximum cargo capacity falls between midsize five-passenger SUVs like the larger Murano and smaller Ford Edge,” says Edmunds, who conclude it “should be adequate for most families.” “Opening tailgate glass is handy,” affirms ConsumerGuide, “but the load deck is relatively high. Rear seatbacks fold with a single motion and sit nearly flat with the floor, even with the headrests in place.”

The Endeavor starts at about $28,000 and goes to $35,000 loaded, but ConsumerGuide warns of “Mitsubishi's troubled image, lower-rung customer-satisfaction scores, and mediocre resale values.” “With a $4,000 rebate on the LS model,” points out Jalopnik, “you could come out ahead. That is, as long as you don't sweat the catastrophic depreciation.”

Finally, ConsumerGuide is pleased to find “engine and road noise are nicely hushed.”

Great crash-test results, good chassis dynamics, and plenty of accident-avoidance features should lend confidence to drivers of the 2008 Mitsubishi Endeavor.

The 2008 Mitsubishi Endeavor come standard with a full complement of safety features.

“For 2008, Mitsubishi equips all Endeavors with anti-lock brakes” and “Active Stability and Traction Control,” notes Kelley Blue Book. Using the vehicle’s anti-lock brakes and other built-in sensors, the Active Stability and Traction Control can strategically apply brakes to various wheels individually and/or reduce engine power to keep the vehicle on its intended path. The inclusion of full-length side curtain airbags is another important standard safety feature on the Endeavor.

The Endeavor performed well in governmental crash testing. “In National Highway Traffic Safety Administration frontal crash testing, the Endeavor earned five out of five stars for driver protection and four stars for the passenger,” reports Edmunds. “In side-impact testing, it scored five stars across the board. In frontal-offset and side-impact testing by the Insurance Institute for Highway Safety, the Endeavor earned the top rating of ‘Good.’” The Endeavor was not tested for rollover resistance or crashes, an area where SUVs typically don’t perform as well as cars, though the Endeavor’s lower car-based chassis could help its performance in this area. Its carlike handling, as well, should aid in accident-avoidance maneuvers.

Used Mitsubishi Endeavor for sale near

The aging 2008 Mitsubishi Endeavor comes with an adequate--but far from standout--features list.

The 2008 Mitsubishi Endeavor’s features list isn’t quite competitive with newer entries in the crowded crossover field.

Kelley Blue Book’s favorite feature on the Endeavor is its blue dash lighting, which they judge to have “a hip, youthful appeal.” They also like the four 12-volt power outlets; using multiple electronic accessories is a breeze inside the Endeavor.

Be the first one to write a review on 2008 Mitsubishi Endeavor
Rate and Review your car for The Car Connection! Tell us your own ratings for a vehicle you own. Rate your car on Performance, Safety, Features and more.
Write a Review
USED PRICE RANGE
$8,000 - $8,958
Browse Used Listings
in your area
7.6
Overall
Expert Rating
Rating breakdown on a scale of 1 to 10?
Compare the 2008 Mitsubishi Endeavor against the competition
Compare All Cars
Looking for a different year of the Mitsubishi Endeavor?
Read reviews & get prices
Related Used Listings
Browse used listings in your area
See More Used