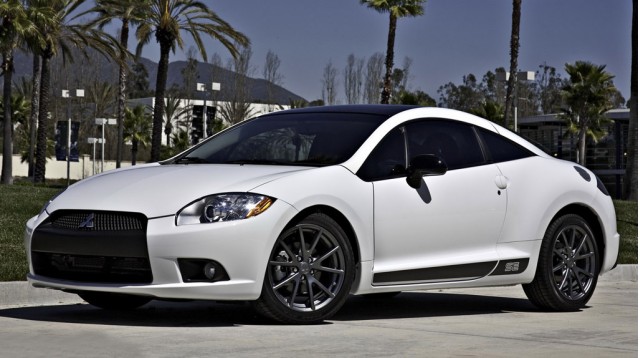 In honor of the Eclipse's last year on the market, Mitsubishi sold a special edition SE coupe with the GT's drivetrain, and donated some profits to Japanese earthquake relief funds.

The 2012 Mitsubishi Eclipse marks the end of an era, and leaves us nostalgic for the Eclipses of the early 1990s.

Around since 2006 in the most recent coupe and convertible editions, the Mitsubishi Eclipse ceased production after a short run of 2012 models. Lacking some refinement, and pretty big for a sporty car, the Eclipse nonetheless could be fun to drive, especially with its available V-6 drivetrain.

It may still be available in some showrooms, but the dated front-driver had long passed its prime. Its soft, organic style didn't hold up well over the years, standing out in relief against vehicles like the Scion tC and even the Volkswagen GTI. Touched up over the years with new front- and rear-end styling, the Eclipse eventually adopted a more aggressive look across the lineup, as base GS coupes and Spyder convertibles adopted some of the faster GT's air dams and skirts. The interior fared a little better, with its more straightforward, almost plain design.

A base four-cylinder engine with 162 horsepower is standard in GS and Sport models, but in all versions, especially the chunky Spyder, it's just overtaxed, and its transmissions--a five-speed manual or a four-speed automatic--are far behind the technology curve. GS Sport models, in fact, come only with the automatic, an odd mismatch. Much better is the Eclipse's 265-hp, 3.8-liter V-6 upgrade, found in GT coupes and convertibles. Ample torque gives it a whiff of musclecar movement, and the five-speed automatic works well enough. Gas mileage is pretty frugal in four-cylinder models, at up to 28 mpg highway, but the V-6 Spyder drops into SUV territory at 16/24 mpg. All versions suffer from a basic architecture that underpins sedans and SUVs--it's too big for a truly sporty car, and the Eclipse feels a little clumsy when pushed hard. Ride quality is much better than average, thanks to a long wheelbase.

The interior's built to acceptable standards, but there's just not as much space as you might think with its size. The front seats lack headroom, and the back seats are simply too small for adults. Coupes and convertibles alike have a small trunk with an equally small opening, rendering it less useful than the hatchback Eclipses of old.

Review continues below
Stability control is standard on the Eclipse, as are anti-lock disc brakes, side impact airbags, and side-curtain bags (except on the roofless Spyder). Safety scores have gone stale, and the NHTSA and IIHS won't be retesting the Eclipse under their new ratings systems.


Though it has been updated lightly over the past few years, the Eclipse does offer satellite radio and Bluetooth connectivity, and a 605-watt Rockford Fosgate audio system is available.

For more information on this coupe and convertible duo, read our most recent full review of the Mitsubishi Eclipse and Eclipse Spyder.

Be the first one to write a review on 2012 Mitsubishi Eclipse
Rate and Review your car for The Car Connection! Tell us your own ratings for a vehicle you own. Rate your car on Performance, Safety, Features and more.
Write a Review
USED PRICE RANGE
$9,900 - $11,998
Browse Used Listings
in your area

7.2
Overall
Expert Rating
Rating breakdown on a scale of 1 to 10?
Compare the 2012 Mitsubishi Eclipse against the competition
Compare All Cars
Looking for a different year of the Mitsubishi Eclipse?
Read reviews & get prices
Related Used Listings
Browse used listings in your area
The Car Connection Daily Headlines